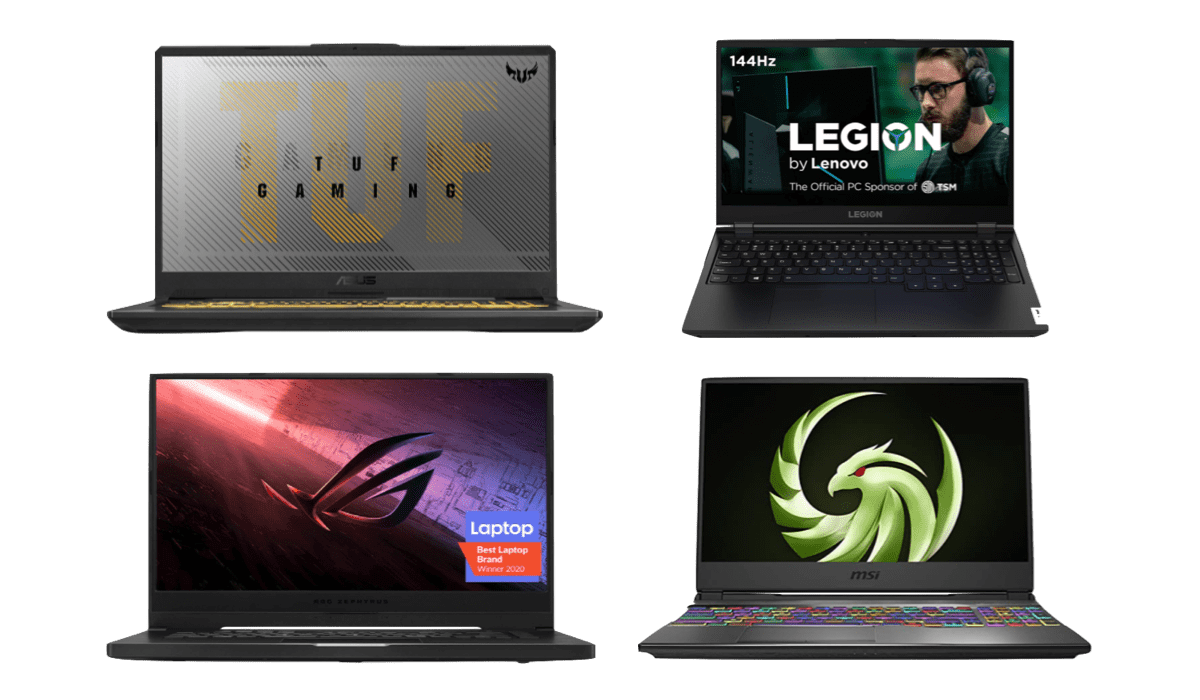 Although we tend to focus on desktops and full-size (or SFF) gaming components, a major portion of the gaming population still uses portable gaming machines (a.k.a. laptops) as their primary rig. Desktop tower CPUs and GPUs tend to generate the most media attention due to the relative power and pricing, but thermal efficiency improvements and the mass adoption of flash storage have led to major improvements in gaming laptops as well.

And while Zen2 and Zen+ CPUs from AMD were making a major splash in the desktop space, similar mobile CPUs were innovating within the laptop space as well. In particular, one mobile AMD CPU has stunned the mid-to-high market, offering extremely strong performance with relatively low power consumption and reasonable pricing. The Ryzen 7 4800H impressed on launch, and the laptops that feature the 8c/16t processor continue to stack up well in pricing and performance benchmarks. The 4800H is strong in gaming thanks to its 4.2GHz boost clock, and also productivity thanks to the high core/thread count. It’s an overall strong performer that won’t bottleneck nearly any GPU you would find in a gaming laptop.

If you know you want to use the 4800H and are now just trying to find the right package, this article will help narrow down your choice based on the most important aspects for you.

For our first category, we are looking at one of the most common distinguishing features that buyers consider for a laptop: screen size. Unlike a desktop, when choosing your laptop you have to already consider things like portability/weight vs. screen size, and whether you want a hefty, larger screen or a lighter, portable machine. Chromebooks or MacBook Airs take this to the extreme, but for gaming, something with a little more size and a little more power is necessary. For many gamers, the 15” standard is the sweet spot, offering plenty of screen real estate while still offering a manageable package. So for someone that knows they want the 4800H in a 15” laptop, we recommend the Lenovo Legion 5.

What we really like about this laptop is that it’s the complete package at a really attractive price. There are not any really ‘cut corners’, everything is relatively strong and it’s difficult to find a true weakness within the machine. The 16GB RAM at 3200MHz is great for Ryzen, and the screen is a really nice IPS-144hz display that is brighter than most competitors at 300 nits and 100% sRGB coverage. The thermal performance receives high marks to ensure the laptop doesn’t overheat and throttle components, and the build quality is top-notch, as you’d expect from a major producer like Lenovo. If you really want to nitpick, we wouldn’t mind an RTX 2060 instead of a GTX 1660Ti, but both are capable of 1080p 144hz so the additional power wouldn’t necessarily change the experience, but would offer some future-proofing. Similarly, the 512GB PCIe SSD could be a full 1TB, but this is upgradeable in the future relatively easily as there is a second SSD slot (M.2 or 2.5”). The real clincher for this laptop is that even as it offers a true 1080p 144Hz gaming experience, the price has stayed reasonable at $999. For a portable machine sporting a very strong CPU and strong components everywhere else, that’s a great price and an easy reason to recommend the Lenovo Legion 5 as the best 15” Ryzen 4800H laptop.

If you are going to be mostly stable and only need portability every now and then, or you don’t mind a little extra weight when you do move around, you might opt for a larger laptop. Some gamers that come from a desktop experience for example aren’t ready to give up their large screens and even with a laptop, want as much screen as possible. Luckily, the 17” standard is still relatively common and offers a plenty-big screen, even for former desktop users. As the 4800H is more than capable of powering higher-end rigs, there are several choices at the 17” size, many of which offer similar specs to each other. But based on the quality of the build and overall completeness, we recommend the ASUS TUF GAMING A17.

On paper, this laptop is remarkably similar to the 15” recommendation above. Both sport the same 16 GB RAM, the same GTX 1660 Ti Nvidia GPU, and of course the same Ryzen 4800H processor. The screens are very similar, although the TUF has a 120hz display instead of 144hz, but that is difficult to really notice during gameplay. On the other hand, the TUF A17 offers a 1 TB PCIe NVMe (and still has another slot for even more storage later), a larger battery (to power the bigger display), and an RGB backlit keyboard. All of these differences are minor, so the real reason to choose this laptop over the 15” Lenovo Legion 5 is for the larger screen. In terms of pricing, the A17 is $1100, or $100 more for the larger SSD and the bigger screen with essentially the same core components. Like Legion 5, this is a great price for a very strong machine.

One interesting alternative to this version of the A17 – TUF706IU-AS76 is the slightly differently configured A17 – TUF706IH-ES75. The two are almost identical, except for the included storage. The ES75 version has a 512GB PCIe NVMe SSD and a 1TB HDD, and costs $50 less. For someone that wants the extra 512GB storage for something like media (as it’s on a slower HDD), this could be an interesting alternative.

If you have the cash, it’s possible to maximize the portability of a laptop and maintain the performance of a higher-end PC. The Ryzen 4800H can easily support recent, powerful GPUs and while thermals become an issue with too big a GPU, more expensive laptops are better able to deal with heat dispersion and aim for low-weight as well as powerful performance. For buyers looking for a higher-end machine that also weighs less than some of the bigger laptops, we recommend the ASUS ROG Zephyrus G15.

Not only is the Zephyrus G15 an ‘ultraslim’ laptop, coming it at under 1” thick and under 5 pounds, this laptop combines the 4800H with a better GPU than the less expensive PC’s above, the Nvidia RTX 2060. In addition, the screen sees an upgrade to 240hz, allowing both the 4800H and the 2060 to really stretch their legs. It’s unlikely you’ll hit 240FPS in anything but older titles or esports titles, but considering the popularity of games like CS:GO, Valorant, Fortnite, or League of Legends, the 240hz screen could still come in handy. The reset of the components are what you would expect from a high-end machine: 1 TB PCIe NVMe SSD, WiFi 6 and Bluetooth 5.0 integration, 16 GB 3200MHz RAM, and a very well-designed exterior. There are only some small pieces to keep in mind, like the RAM is reportedly a single stick, so you may consider adding a second 16GB stick to maximize performance later on, and reportedly temperatures can get quite hot during heavy workloads, but this isn’t too surprising given the ultraslim form and the powerful components. Overall, if you’re looking for a step up from our first two recommendations and can spend a bit more money, the Zephyrus G15 is a great choice.

When searching for a gaming laptop, you may notice a pretty prevalent trend. While AMD has made inroads into the CPU game with their Ryzen processors, even in the laptop market (although Intel still dominates by market share), the laptop GPU game is still overwhelmingly controlled by Nvidia. Unless you specifically look, it is very difficult to find an all-AMD portable machine. But, because some people are true Team Red supporters, and also because the most recent mobile AMD graphic cards are surprisingly competitive, we did exactly that. Our recommendation for the best all-AMD Ryzen 4800H laptop is the MSI Alpha A15 A4DEK-004.

Let’s start by saying that in terms of pure frames-per-dollar, this laptop is not as good a buy as the two first recommendations. The AMD graphics card in the Alpha A15 is the RX5600M, which slots in between the RTX 2060 and the GTX 1660 Ti on most benchmarks. While this laptop is really great build quality with some interesting add-ons like a SteelSeries partnership for the keyboard, the core components are essentially the same as our 15” recommendation (16GB RAM, 512 GB PCIe SSD, 144hz IPS display, etc.). The Alpha A15 is lighter and slimmer, and the RX5600M will outperform the 1660Ti in some games and applications, but the Alpha A15 is listed at $1300, or 30% more than the Lenovo Legion G5. It’s still a great machine and the build quality especially is really nice, but the real reason to buy is because you want to support AMD. For a Team Red superfan, we have no problem recommending the MSI Alpha A15 for a Ryzen 4800H based laptop.

Buying a laptop is in many ways similar to a desktop, in that you are searching for the best performance possible at a given budget. However, there are several added factors to consider, like screen quality, portability, and thermal throttling. These new aspects can seem like they complexify purchasing a laptop, but the reality is that it just means you have to think extra hard about what is most important to you, and what your budget is. At a given price, a laptop will almost never beat a desktop, but you also have to remember that a laptop integrates a keyboard and screen, which are additional costs for a desktop.

Once you’ve decided that a laptop is the right choice for you and selected the Ryzen 4800H as your CPU due to its 8c/16t and 65W TDP design, these recommendations will help you select your next 15”, 17”, High-End Ultraslim, or All-AMD portable gaming rig.