Prebuilt vs Custom Gaming PC: Which is Best for You? 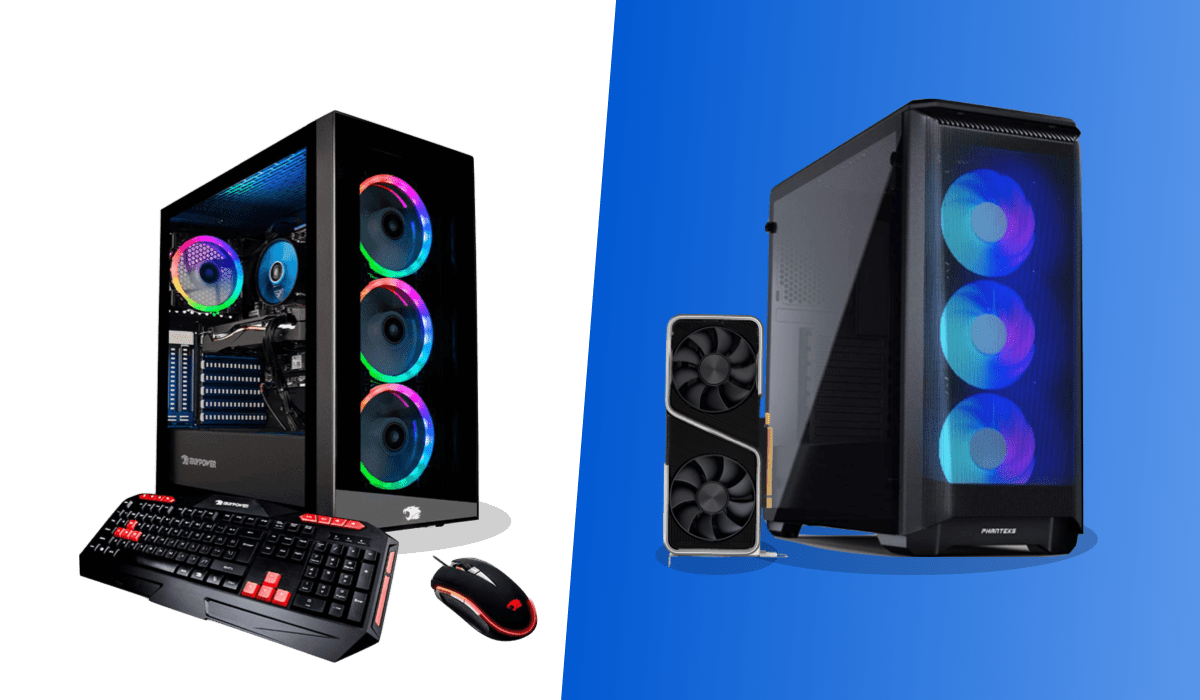 All hobbies have their major sticking points. Sometimes it’s about brand loyalty, sometimes it’s about styling (spaces vs tabs!), and sometimes it comes down to the purists fighting the rest of the world on ‘best practice’. Like any hobby that has more than one person doing it, the PC gaming world has their own debate: do you build yourself, or buy a prebuilt PC?

For a long time, almost the entire enthusiast gaming community agreed that building yourself was the only real way to go. It was fun, it gave you an immediate connection to your PC, and it wasn’t really that hard. In fact, the only disadvantage to building yourself was…well, actually building! It takes time and patience, and a little bit of technical know-how to be comfortable building a PC. And many of those points remain, but recent changes to the market and increased competition have led to a resurgence in the number of buyers looking to prebuilt machines, and for very good reasons.

If you are expecting to find a clear-cut right or wrong answer in this article, then you may be disappointed. Just like when choosing components, it’s all about finding the right choice for your needs and building yourself vs prebuilt is no different. What we will do is lay out the case for each side, and then let you be the judge of which advantages and disadvantages are more important to you.

Let’s get started with the ‘defending champion’, and understand the reasons for building your own PC:

The Case for Building a PC Yourself

Building yourself is the age-old classic choice for most enthusiasts. Lots of people will give lots of different reasons, but they really come down to three main things: it’s better value, it’s more fun, and you have a better knowledge/connection with a PC you built yourself.

This reason is pretty straightforward and to be honest, the main reason for building yourself for a very long time. While major manufacturers are able to save some money by buying in large amounts and working with ‘economies of scale’, they almost always have premiums added to their costs, as well as the actual costs of building. Beyond that, they also have to deal with shipping/logistics for larger PCs, customer service costs, and all the associated overheads that go with dealing with inventory of large-ticket items. Those costs tended to outweigh the savings made from ‘scaling’, meaning that consumers were getting less powerful components in prebuilts for the same price as they could buy individual components and then put them together themselves.

While this is becoming less and less true, for the most part (outside of crazy sales/deals), it remains more cost-effective to build yourself. With a little bit of research and patience, you can almost always put together a rig with better performance and higher-quality parts within the same budget as a prebuilt. The ‘gap’ in cost tends to widen as you get into higher-end parts, but it remains noticeable at almost all levels. It’s hard to put a figure on this difference as it highly depends on the components and manufacturers, but you can expect to spend somewhere like 10-15% less for the same quality PC if you build it yourself. Not a ginormous difference, but still meaningful!

This second reason is probably the most cited after cost, but it is also probably the most subjective of any argument in the ‘great debate’. It’s true that many people drawn to PC gaming or hardware in general have an interest generally in technology, but that’s not always the case. And while some people spent hours doing puzzles or building LEGO’s growing up, others were not into the same toys and really see the PC as a tool to get to the good stuff: gaming. But it is true that if you like to work with your hands, you enjoy puzzles or LEGOs, or you have fun with DIY projects, building yourself offers up a ‘fun’ experience that a prebuilt necessarily misses.

The counterargument to this, which we’ll explore in more depth below, tends to be that it might be fun, but it’s also stressful. What if I break it? What if something doesn’t fit? We see these questions a lot from potential first-time builders. And while there is no way we can say there is zero risk of anything going wrong, PC building is nowhere near as complicated as it used to be or as some people think. Components today are typically well-built and ‘foolproof’ in that they can’t be plugged in wrong or fit badly, they just wouldn’t go where they were supposed to! RAM is a good example. If you are putting DDR4 RAM in backwards, it just won’t fit because it’s not quite symmetrical. If you try to force it, you could cause damage, but if you are patient, you would immediately notice that it’s not the right orientation and be able to fix it with no problem. Other components are similar. So, if you like LEGOs or working with your hands, stress/fear shouldn’t stop you from thinking of building yourself as a ‘fun’ experience, which would be a big advantage for some people in building themselves.

This last reason is really a personal question and harder to define generally. Some builders express that they felt a sense of ownership and price, or a connection to their PC because they built it themselves. They put together each part, from an empty case to a final product, and know the ins and outs of the machine that they wired and put together. For some, this creates a sense of connection that is hard to have with a prebuilt. It’s personalized, it’s unique, and it’s yours. We won’t go into too much depth because this is a very personal argument, but suffice to say that the intimacy of building is an advantage for some people that a ‘personality-less’ prebuilt would have trouble to match.

The Case for Buying a Prebuilt vs Custom PC

With the changing times, prebuilt PC’s are becoming more and more viable when compared to building yourself. Recent product launches have solidified some of the advantages, as has the historical argument of centralizing your support. The case for buying a prebuilt comes down to the risks of building yourself in some ways, but follows three main ideas: availability of stock, centralized warranty, and lack of time/interest.

Never has this argument been more relevant than today. With recent product launches, both AMD and Nvidia (and Intel to a much lower extent) have shown an inability to keep up with demand. Ampere GPUs and Zen3 CPUs are nearly impossible to get a hold of individually, with scalpers and scripters buying the little stock available as soon as it hits online retailers. The frustration associated with counting down the days to launch only to see the constant ‘out of stock’ display has led many die-hard DIYers to reconsider.

Prebuilt companies have an inside edge in this type of competition. They buy in bulk, so AMD or Nvidia or whoever will set aside a certain number of wholesale products, often in large numbers in order to keep their partners happy. For consumers, this means that prebuilt PCs have a much higher likelihood of offering latest generation parts in times of scarcity, and this has been increasingly obvious during this holiday season. While Amazon for example, has been out of stock almost constantly for the Ryzen 5800x or Nvidia 3070, places like CyberpowerPC and iBuyPower have been regularly filling orders on prebuilt machines featuring those parts. Even for building purists, seeing your centerpiece of a new build in stock if you just let someone else build the PC for you can be extremely tempting. This argument might not always hold true if future launches have an abundance of product, but for now, this is a very good reason to consider a prebuilt PC.

No one likes to think about a part breaking down or arriving DOA, but like any product, a few lemons will always sneak past QC and cause problems for an unlucky buyer. If you only figure this out after having built your own machine after buying all parts individually, isolating the faulty component, then dismantling, then RMAing and waiting for a replacement can be awful. And even then, some customer service centers for individual components are terrible and will fight you every step of the way. For a prebuilt however, the technical support side is much easier. It still sucks to get your new machine and press power and have nothing happen or an error screen pop up, but at least your path forward is much simpler.

Prebuilt machines have a centralized warranty from the builder that don’t require troubleshooting or anything on the part of the consumer. If you have a problem, you know exactly who to contact to get a solution, as you see highlighted on this prebuilt from CyberpowerPC. Rather than deal with five or six or seven different companies in case of failure, you have a one stop support that is responsible for doing all the legwork for finding the problem and offering a solution. While we all hope that nothing ever goes wrong, if it does, having a centralized warranty is always preferable.

This argument is similarly about as straightforward as it gets. Some people just aren’t interested or don’t have the time to spend several hours putting together their components, let alone researching and buying each one individually. That’s time that could be spent doing something else, like gaming! This argument is even really more of a pre-requisite. If you aren’t interested in spending the time and effort to build yourself, nothing else really matters: buy a prebuilt!

As we said at the beginning, there is no right answer in this great debate. Each reader and potential buyer will have to be his/her own judge and jury when weighing these arguments. Hopefully we have given you the tools to balance the advantages and disadvantages to either choice.

Once you have decided, be sure to check-out our guides for both prebuilts or individual components at almost any budget to help you find the right product at the right price for your next premium build!