Best RAM Configurations for Gaming, Workstations & General Use?: One vs Two vs Four Sticks 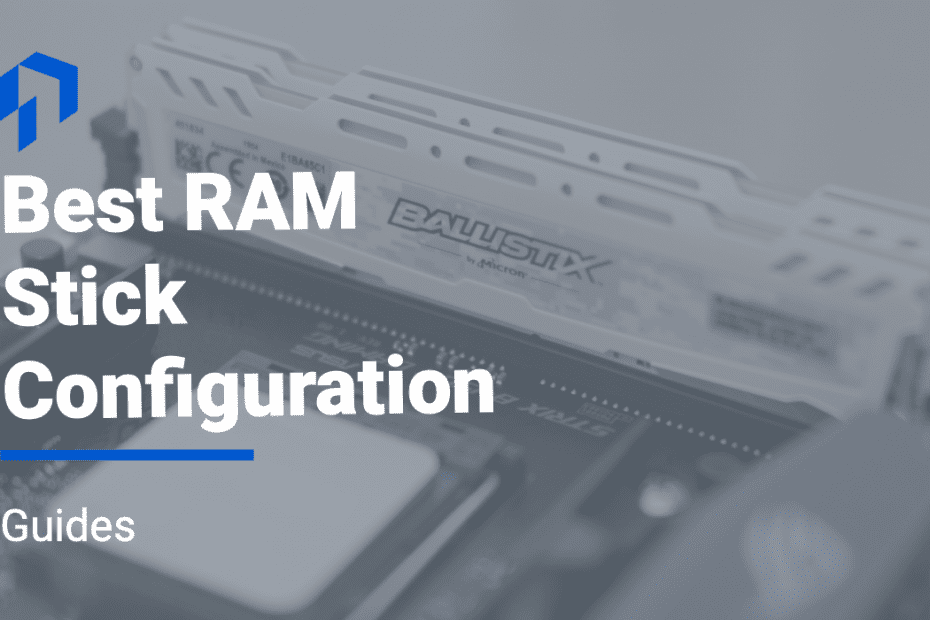 The answer is ‘usually two’ but read on to find out why!

On most consumer platforms you have the choice of motherboards with two or four slots for RAM, and RAM is sold in single sticks, kits of two or matched sets for four ‘DIMMS’ or memory modules. In this article, we’ll describe how these configurations can influence performance and point out the best options for general use and gaming.

RAM Sticks and kits: One, two or four

RAM is sold either as individual sticks, pairs, or sets of four sticks. These sticks consist of tested and matched chips: just like a processor’s, the silicon quality and production methods vary from chip to chip and batch to batch. After testing them manufacturers construct RAM modules that will perform to advertised standards in speed and latency. Single sticks simply need to meet a quality specification, but kits will be matched to ensure stable performance: from the systems perspective they must behave identically. This is why a pair of sticks costs slightly more than a single stick in some cases, and a kit of four matched sticks are significantly more expensive than buying two paired kits.

In order to understand why you need to know a little about how the Processor accesses memory. The Processor has an inbuilt memory controller, and in all consumer processors these are ‘dual channel’. The memory controller has two separate channels to access the memory and each of these channels is connected to one of two or a pair of four memory slots.

The motherboard itself has copper traces that directly connect the CPU to RAM. In most consumer motherboards these are configured in a ‘daisy chain’ arrangement, first connecting with one socket, then continuing on to the second. Each memory channel uses its own traces, one to each pair of RAM sockets. When using just two ram sticks, they go in the slots that are at the end of the trace and furthest from the CPU: This properly terminates the connection at the end of the trace and prevents signal ‘reflections’ and interference from an unterminated trace that can lead to system instability and poor RAM performance. This is why we see the ‘second and fourth slot’ configuration in most PC’s with four slots but only 2 sticks of RAM installed. When you have two sticks on the same channel RAM sticks, the signal also hits the stick at the intermediate point and can access both sticks simultaneously. With both channels active this allows you to use all four RAM slots at the same time.

Some motherboards have ‘T Topology’ where the traces split prior to the slots and then interface both slots at the same signal distance from the CPU. These are designed to be used with all slots fully populated with matched RAM, so that the RAM chips themselves are equidistant from the memory controller for identical performance.

‘Dual Rank’ RAM moves this topology inside the stick of RAM itself, with two sets of Memory chips connected to appear in parallel to the memory controller as if they were in their own separate slots on the motherboard and connected with ‘T’ Topology.

From this you can probably conclude that when you’ve heard about ‘dual rank ram’ or ‘four stick kits’ offering maximum performance, the reason is actually the same: Both configurations allow maximal bandwidth from the memory controller to RAM. But actually, performance is a little more nuanced than that, and this configuration isn’t always optimal.

In terms of performance, the above information should demonstrate why a single RAM stick should only ever be a last resort: A single RAM stick, even dual rank, will only ever occupy one channel of the memory controller. You are only using half of the potential bandwidth to communicate with your RAM, and this can be seriously detrimental to performance. Whilst it can be acceptable in an office or basic use PC, when on an extreme budget, or if you intend to upgrade as soon as funds allow, you can expect gaming performance to be negatively impacted by as much as 10%.  Of course, it’s possible to install a pair of ram sticks ‘incorrectly’ by placing them in adjacent slots on a 4 slots motherboard, and this introduces the same problem – only half of the potential memory controller bandwidth is utilised. Be sure you read the motherboard manual and configure your RAM as recommended for optimal performance.

In all other cases, you should seek a base configuration of two RAM sticks with matched specifications, preferably sold as a kit. Placed in the correct slots on the motherboard this will enable ‘dual channel mode’ and allow you to use the full potential of your memory controller. The very fastest RAM overclocks tend to be in this configuration as it provides the most stable configuration without subjecting the memory controller to the added stress of accessing four sticks simultaneously. Some specialist overclocking motherboards are sold with just 2 RAM slots for this reason, whilst others prefer mITX boards owing to the shorter signal path from CPU to RAM slot.

Bridging the gap is ‘dual rank’ RAM, and this allows wide bandwidth access to four ‘ranks’ of memory modules in just two sticks. This configuration can be considered optimal for RAM performance but does impose a higher load on the memory controller which can limit the ultimate speed of the RAM. In most cases this is a moot point as the highest speeds will not be necessary for daily use, nor beneficial to a gaming system. RAM in this configuration may show a 2-5% performance uplift in benchmarks designed to highlight RAM variance, vs identical single rank RAM. However, these gains are hard to realise in actual use, where you will likely be GPU limited.

If you are seeking larger RAM capacities (64GB+) or simply want the aesthetics of four RAM sticks, then you can consider a four stick kit. You will find that the complexities of matching these kits, as well as the additional load they place on the memory controller in large capacities means that they are more expensive and rated for lower speeds. Nevertheless, overclocks approaching or exceeding 4MT/s with tight timings should be possible on high-quality kits although you will pay a hefty premium for them. In this scenario, you will be balancing your need for RAM capacity with the ultimate speed of RAM the system can sustain. Ultimately, it’s likely that CPU performance or GPU capability is the limiting factor of the system long before RAM speed holds it back.

Summary: For most people, a two-stick kit is the right option.

For most users, most of the time, 16GB of DDR4 RAM in a 2x8GB kit is optimal for gaming and general use. Speed ratings of 3600MHz at around CL16 are affordable and easy to find and should be the focus of your search for most high-performance gaming systems. Ensure you install it correctly to take advantage of dual-channel mode!

If you need 32GB for productivity or more demanding tasks, again a 2 stick kit will offer the best balance of price, stability and performance. Whilst there are some small differences between dual and single rank, they’re small and specific enough not to matter unless you’re looking specifically to overclock and maximise RAM performance.

If you seek out faster RAM or four stick kits, be aware of the limitations of the memory controller and don’t fall into the trap of overpaying. Unless you’re specifically seeking out RAM to overclock, you should aim for Ram at 3200-3600MHz rating CL16 as that’s most likely to run XMP on the latest Ryzen Zen 3 and Intel 10th and 11th Gen CPUs.