How to Reduce CPU Temperatures (Benefits, How to Steps, Methods) 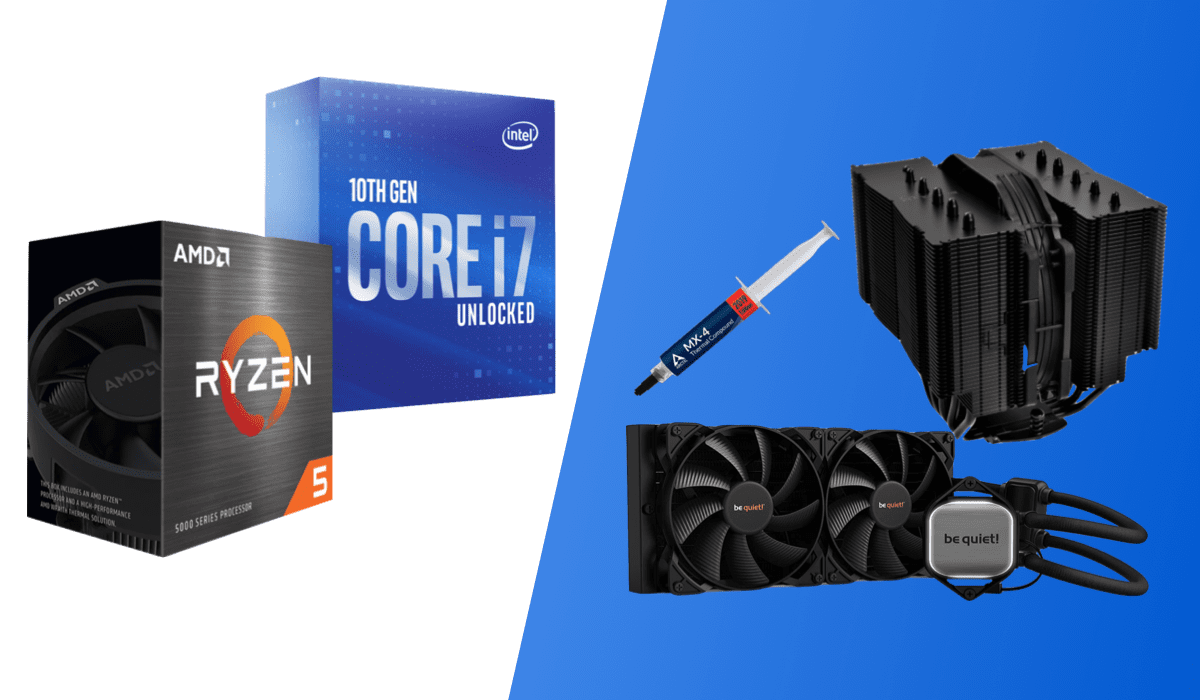 Keeping CPU temperature under control is key to your computer’s performance. Whether you are playing games, doing work, or even simply browsing the internet, your CPU could raise in temperature. Fluctuations based on how complex the task is are normal; however, there is still an upper limit to what your CPU should reach.

Going beyond your CPU’s temperature limit is dangerous and could ruin the CPU or motherboard. Modern CPUs have built-in temperature controllers that will automatically turn off the computer if it gets too hot, but it is best to not rely on these. Instead, taking a few simple steps now will help keep your CPU temperatures low.

Why To Keep Your CPU Temperatures Low

Keeping CPU temperatures low is important for maintaining the longevity and performance of your computer. While all parts of a computer are affected by temperature, the CPU is one of the most sensitive parts. Overheating can lead to reduced performance, shutdowns, and even total failure of the computer. There are plenty of other reasons as well – ultimately, they all lead back to improving the performance of your computer. With almost all electronics, the lower the temperature, the better. Most temperature increases happen because of increased power consumption in the CPU and limited airflow.

As complex tasks continue over a period of time, temperatures rise. This is due to several factors, one of which is stagnant air – with poor airflow, hot air generated from the chip is pushed out into the case and simply sits there. In an ideal situation, cooler air flows into the case from the outside while hot air is expelled from the inside. This creates a “neutral” airflow, where the air inside the case is roughly room temperature.

As you begin any task on your computer – from opening a program to simulating high-intensity 3D models – your CPU draws additional power. This scales with the complexity of the task, so running a game will draw more power than browsing the internet. You can find the general limits of this power for your CPU by looking up its TDP, or thermal design power. This is the maximum amount of heat generated by the chip that can be dispersed.

Some chips are much more efficient with their temperature placement than others – in recent years, AMD has taken the lead over Intel here. Still, this is unlikely to be an issue outside of particularly small builds (such as those in micro-ATX cases) or those with particularly bad airflow. However, if you are worried, you should double-check your chip to be sure.

Regardless of your chip manufacturer, keeping temperatures low is important. Most CPUs want to be somewhere between 50-70°C while under load. While idle or only engaging in light activity, temperatures should be a bit lower than even that. Any chip hitting above 80°C will likely experience throttling, and above 90°C, shutdowns should occur. These are all lower than the listed “maximum” temperatures on chips (most are slightly above 100°C), but that does not mean they are safe to operate in for long.

There are plenty of different ways to decrease your CPU temperature, ranging from short term solutions to basic maintenance. We’ll go into more detail on three of the biggest and best changes you can make here. Many of these methods are made up of smaller tasks that you may have heard of or even already be doing. We’ve also focused on easier methods that can see immediate changes. While changing your thermal paste is likely a good idea, it is unlikely to be the only factor.

If your CPU temperatures are particularly bad – consistently above 80°C or throttling during high-stress activities – you can use a combination of methods to see the most effective results. Before entering into some of the more complicated solutions, this list of quick fixes may cause noticeable improvements:

A consistent and good airflow around your PC and CPU is one of the most important parts of reducing temperatures. Computer parts constantly give off heat, even when barely idle. Stagnant air allows this heat to build up and stay around the internal components while slowly rising.

To avoid that, you need to introduce intake and outtake options into the case. Ideally, the intake and outtake through the case is equal – creating a neutral airflow setup. Normally, this is done through designating intake fans and exhaust fans at opposite ends of the case, with intake at the front. Depending on your chassis, airflow may need to take another form, such as bottom to top.

Whatever the case may be, it is important that you always allow for good airflow. A few quick tips include:

Keeping your case clean somewhat fits into the “improve airflow” method, but it is so important that it deserves its own section. By keeping your computer case clear of obstructions, you allow air to flow more easily and do not trap dust or hot air. This allows everything to flow much more smoothly. Cleaning your case is made up of two parts: properly organizing the build and removing dust and other build-up from the inside. Luckily, these also split evenly into “setup” and “maintenance”, so you only have to worry about one at a time

If you built your computer yourself, you likely considered cable management – even if only long enough to ignore it. Managing your PC’s cables is not just for aesthetics; they take up a significant amount of space in the case and can directly interfere with airflow. Most modern cases contain space on the back or in a separate compartment to store additional wires and tighten up lengths. If you have not revisited your cables in a while, take the time to do so.

Try to make the area of airflow in your computer as clear as possible. In most mid-ATX towers, this is the area directly above the CPU anyway, so it is sure to help with temperatures. This also includes moving around fan wires or any additional lighting you’ve installed.

Cleaning your computer is one of the best ways to see an immediate drop in temperatures, especially if you do not do it often. As fans push and pull air, they naturally accumulate dust. This is better than the dust settling on components, but it means that they slowly become less effective over time. Regularly cleaning your fans and other components can keep them fresh and working wonderfully.

Luckily, cleaning computer components is easy to do. Especially if you built your PC yourself, you will already be comfortable with the various parts and steps. Some tools that may be helpful for cleaning include:

Not all of these are required – you can see effective results with any one of them, really – they can work in tandem to make your job easier. A dust mask may not be required if you recently cleaned the computer.

To start, open your computer by removing the side panel. Use the compressed air upright and a safe distance from the electronics to clear out any visible dust. Be sure to follow the directions on the can to ensure that no liquid comes out with the air, as it can damage electronics. You can also use a clean microfiber cloth to gently wipe away dust on larger areas.

With the general computer cleaned, focus on the fans. Hold them still with your hand and blow the dust that has accumulated on the blades away from the computer. The paintbrush can be particularly useful here for caked-on grime. Try not to move the fans while cleaning, as it can needlessly wear down the ball bearings and other components.

Finally, focus on the power supply – this is normally accessible on the underside of the case, often behind a mesh screen on newer cases. Use the compressed air here once again. When you’re done, simple replace the side of the computer and see your thermal performance improve.

Dust traps in heat and significantly reduces airflow, so this is one of the best ways to improve your CPU performance. Especially focus on your CPU cooler’s fan if temperatures on the CPU, in particular, seem high.

After improving your computer’s airflow and giving it a proper cleaning, temperatures may still be high. In this case, a hardware change may be required. This can be as minor as replacing the thermal paste between the CPU and its cooler, or as extensive as upgrading the CPU cooler itself. Before deciding on what path to take, take a close look at the current CPU cooler and ensure it is properly working.

The fans should spin without issue, be rigidly connected to the chip, and all pins should be plugged into the motherboard. You can also ensure that the fan properly works by confirming with a third-party fan app on your PC.

If the CPU cooler works correctly, reapplying thermal paste is the next recommendation. Especially if your system is aging or was prebuilt, the thermal paste may have dried out or not fully cover the chip. To replace the thermal paste, remove the current CPU cooler and wipe the chip and connecting plate clean. Apply a small dot to the center of the CPU – when the cooler is placed back on, the pressure will evenly distribute it to the entire chip.

While it is important to have enough thermal paste, be careful about putting on too much. It should not spill out at all when the cooler is placed on top. For better coverage, you can slightly wiggle the CPU cooler on top of the chip before settling it. Thermal paste should be replaced every time the CPU cooler is taken on or off the CPU for maximum performance.

If your CPU cooler is stock, it may not provide enough cooling to the chip for high intensity tasks. This is especially relevant for those overclocking their CPU, as it dramatically increases the heat production of your PC. Replacing the CPU cooler with an aftermarket option – whether air cooled or liquid – is a good idea. Given the price of a good aftermarket CPU fan, however, this is normally a final option (unless you are planning other upgrades).

The largest choice here is between an air-cooled CPU fan or a liquid-cooled radiator combo. A liquid-cooled option is generally better, but this depends on your climate, case space, and support. Consider the space in your case, current cooling solutions, and budget before deciding.

There are plenty of ways to reduce the temperature of your CPU, and the most effective method will change depending on a number of factors. Start with the cheapest options first and ensure that your case is clean and all the fans are working. Tracking your temperatures using a third-party application is a great way to make sure there is actually an issue before moving onto larger fixes.

Airflow is king when it comes to cooling your computer in general. It is especially important for expensive parts like the CPU and GPU. Focus on creating a neutral airflow where cool air is consistently entering the case. Upgrading your cooing solutions is always an option but is often expensive. If you are upgrading, consider your different options and what fits in your case.