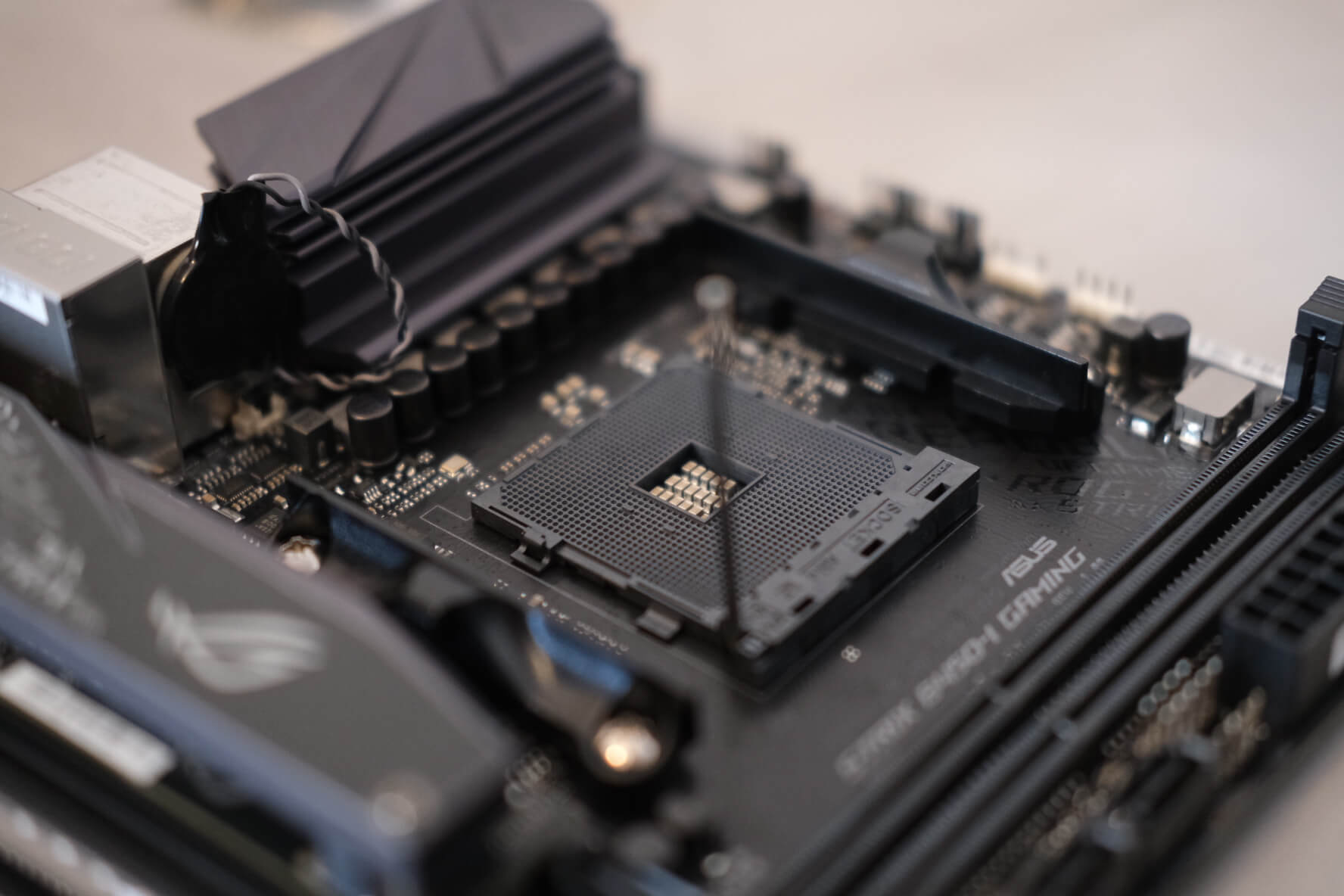 Nvidia has announced their next-generation lineup of Ampere GPU’s and it’s created a huge storm. These graphics cards will blow the outgoing Turing cards out of the water on both performance and price. One of the big features is that these new GPU’s support PCIe 4.0 standards, but what does this mean for you? Do you need to replace your motherboard and CPU to even run an Ampere GPU? And will running on a PCIe system hinder these GPU’s performance? In this article, we’ll answer those questions and clear up some of the confusion around PCIe 4.0.

PCIe 4.0 is simply the next generation of the interface standard by which certain components, notably graphics cards and solid state drives, connect to your system. PCIe 4.0 doubles the bandwidth available to components to 16Gb/s allowing even more data to be shunted around the system for use. The standard is both forwards and backwards compatible, so the move to PCIe 4.0 doesn’t mean PCIe 3.0 devices become useless. The acronym ‘PCIe’ crops up in a number of places because it defines the standards the manufacturers must adhere to. You find a ‘PCIe slot’ which is the physical connector your GPU plugs into. The x16/x8 simply means it has 16 or 8 PCIe lanes assigned to it. A ‘PCIe power plug’ connects your Graphics card to the Power supply and again is another part of the PCIe standard. And finally we come to the protocol itself. Solid State Drives in particular have advanced to a state where they are running up against the bandwidth limitations of the PCIe 3.0 specification. The latest generation use PCIe 4.0 for even higher data transfer rates.

Because PCIe defines a new standard, the data transfer components of a motherboard and CPU have to be designed to accommodate it. AMD were early adopters of this and their most recent B550 and X570 motherboards are PCIe 4.0 enabled. So long as you use the most recent Zen 2 Ryzen CPU’s you will incorporate this functionality into your PC. Intel hasn’t yet equipped their CPU’s with PCIE 4.0 compliant I/O, so whilst the most recent round of Z490 chipset motherboards are ready for PCIe 4.0, no current Intel CPU supports it. You’ll have to wait until 2021 and ‘Rocket Lake’ CPU’s to get an Intel platform that supports PCIe 4.0.

Will I need a PCIe 4.0 equipped Computer to run an Ampere GPU?

The short answer is no, you will not! PCIe is both forwards and backwards compatible meaning that you can put a PCIe 4.0 Graphics card into a PCIe 3.0 system and it will work just fine. In fact last years AMD RX 5700XT GPU is also a PCIe 4.0 capable GPU but runs just fine on PCIe 3.0. If you want further proof Nvidia’s own tech demonstrations were run on an Intel i9-10900K, a CPU that lacks PCIe 4.0 Support. So rest easy, this latest round of GPU’s will not force you into an entire system upgrade if you want to take advantage of this huge leap forwards in performance per dollar of the Ampere GPU release.

Will Running an Ampere GPU in a PCIe 3.0 PC make it perform worse?

The answer here is ‘no, almost certainly not’. Until we get our hands on these new GPUs to benchmark and test them we won’t know for sure but it’s safe to make a good bet that it will not harm performance. The RTX 3070 is promised to perform equivalently to an RTX 2080 Ti, a PCIe 3.0 Turing GPU. The RTX 2080 Ti uses about half the available bandwidth of the PCIe 3.0 specification, so it’s safe to assume that the RTX 3070 will not be able to overwhelm the PCIe interface and there will be no performance advantage to the higher bandwidth connection. The RTX 3080 is supposedly around 20-30% more powerful so again falls well within the bandwidth requirement of the PCIe 3.0 interface. Indeed Nvidia also touted enhanced texture compression technologies that are handled by the GPU, so this should actually reduce the amount of data the bus needs to handle.

The RTX 3090 is the top tier GPU and is really aimed at content creation rather than gaming. True performance levels aren’t really know but if any of the newly announced cards are going to challenge the limitations of PCIe 3.0 then this will be the one to do it. Again, even this card uses myriad technologies to produce 8K output, including rendering at much lower resolution and upscaling it via Nvidia DLSS technology: This reduces the bandwidth required to allow the GPU to perform. Even this monster may not be as hard on the supporting system as its raw specification may indicate.

The uncertainty comes because it’s impossible to predict the future. If you’re intent on playing the most demanding games at the highest quality settings on a 4k monitor then there’s potential for bandwidth demands to approach the upper limits of PCIe 3.0 – but it’s highly unlikely to have an appreciable impact this generation of GPUs in any normal gaming situation.

There really isn’t a simple answer here. It’s clear that Nvidia chose the Intel i9-10900K to showcase their new GPUs, so they have no qualms about their performance on a PCIe 3.0 system. There is a tradeoff to be made because whilst AMD CPU’s now challenge Intel in almost all areas Intel CPU’s do still have a higher per core throughput and therefore excel in high frame rate gaming. For the time being it appears that an appropriate pairing of either a Zen 2 AMD CPU or one of the higher performing Intel CPU’s will allow you to extract maximum performance from an RTX 3070 or 3080 without any concerns about the interface it runs on. If you’re a competitive gamer then an Intel CPU is likely to offer more performance, with the benefits of higher CPU core speed negating any slight limitations of the PCIe interface.

If you’re looking to build a workstation then the choice is much clearer. AMD’s PCIe 4.0 implementation combined with their excellent value high-end CPU’s like the 3900X and 3950X offer unrivalled performance for the money. In most instances, an AMD CPU, X570 motherboard, PCIe 4.0 NVME SSD and an Ampere GPU will make a formidable combination in compute-intensive and content-creation tasks.

Do I need a PCIe 4.0 system to take advantage of RTX IO?

Again the short answer is no: any RTX equipped system can take advantage of this advance in the way texture data is delivered to the GPU.

Nvidia highlighted this technology in their keynote in concert with PCIe 4.0 but the delivery was a little muddled. This technology works independently of PCIe 4.0, but is designed to address a problem created by PCIe 4.0 SSD’s in particular. Modern high resolution imagery makes for absolutely massive data transfer requirements, and it is stored in a compressed format to save disc space. When gaming, texture data must be transferred off of your storage and into RAM in order to be used to render images. The traditional way of doing this is that the data is passed to the CPU to be decompressed, and then passed on again into GPU VRAM for use. With slower drives this isn’t a problem other than being inefficient. With PCIe 4.0 drives able to transfer over 7GB/s of data and those speeds set to increase the SSD can swamp the CPU with data to decode, stopping it in its tracks and actually preventing it from running the core game code cleanly. NVIDIA have addressed this problem by removing the CPU from the equation completely. The GPU will now be able to make a call to storage directly to receive and decode the texture data itself, preventing performance issues imposed by this workload on the CPU. It has been confirmed by Nvidia engineers that this technology is independent of the PCIe specification. However, it is particularly relevant to systems with PCIe 4.0 NVMe SSD’s, because of the rate at which they can present data to be worked on. This technology will come on stream in future as it requires game developers to implement it into their games. Expect it to make a big difference in next-gen open-world titles where data is constantly streamed to render a large game environment.

If you need PCIe 4.0 or want a system that is ready to grow to take use of the new specification then your only options currently lie with AMD. PCIe 4.0 is an embedded specification so it requires a motherboard and CPU that are PCIe 4.0 compliant. This means an AMD B550 or X570 chipset motherboard, or at the high end their AMD TRX40 Threadripper motherboards. These three platforms are the only ones that will currently enable you to take advantage of the high-performance PCIe 4.0 SSDs on the market, such as the Sabrent Rocket 4.0 or the Samsung 980 Pro. Whilst Intel Z490 motherboards are PCIe 4.0 ‘ready’ the current 10th generation Comet lake CPU’s are not. It will be at least one CPU revision before Intel catch up and offer PCIe 4.0 compatibility.

Am I missing out if I don’t have a PCIe 4.0 capable system?

In most cases, no. Whilst the advantages of higher bandwidth data transfer are evident, PCIe 4.0 is a forwards looking specification. Very few applications require the kind of SSD speed that PCIe 4.0 SSD’s offer, whilst as we’ve discussed no current GPU, not even Ampere, exceeds PCIe 3.0 capability. For a gaming and general use PC PCIe 4.0 doesn’t offer any benefit. IF you are building a workstation or at the extreme high end, or just want to be ready for what’s next in PC technology then it might be worth ensuring your next system is PCIe 4.0 capable. With so few PC’s currently supporting PCIe 4.0 it’s a specification that will grow into its utility in the coming years as drives, GPUs and other components continue to get faster. This is the same process that’s been ongoing since the birth of the PCIe specification in 2003. So, for now, you will not miss out if you build an excellent PCIe 3.0 system and it will serve you well for years to come. In time as hardware ages all systems will eventually be replaced by PCIe 4.0 and it will become the new standard – and we can have this conversation again about PCIe 5.0!