WD Blue vs Seagate Barracuda HDDs: What are the Key Differences? 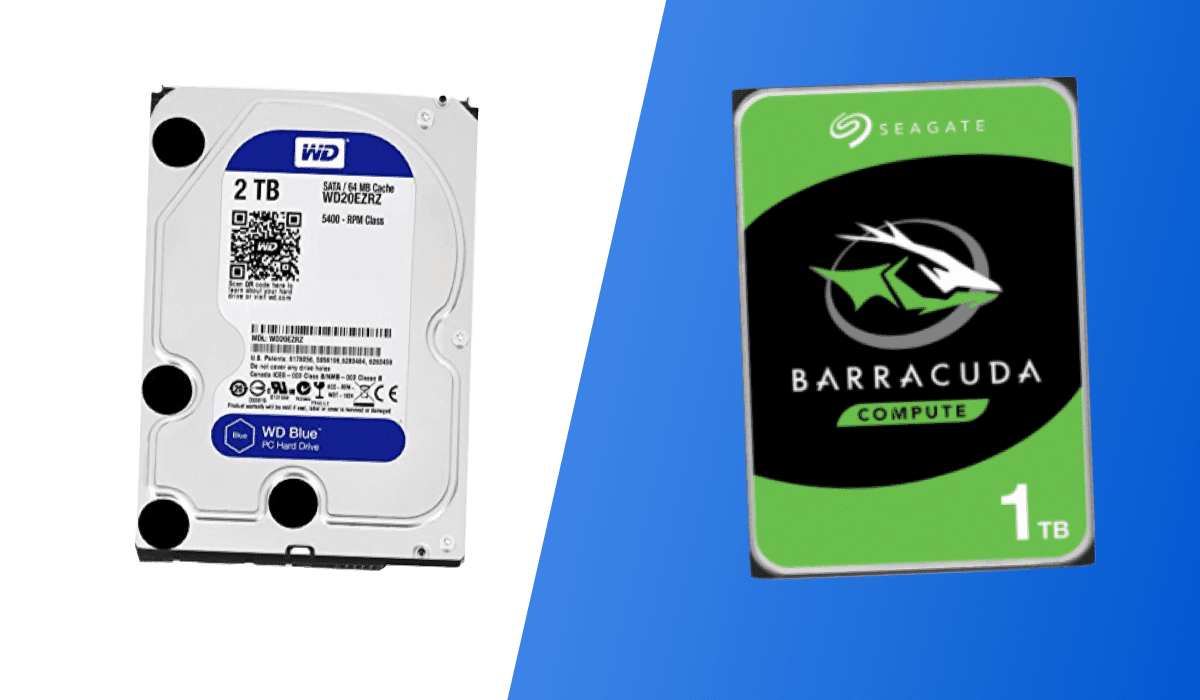 With new and fast forms of storage such as solid-state drives (SSDs) gaining traction in recent years, hard drives (HDDs) have become more affordable as high-capacity storage solutions than they were just a few years prior. Users should not expect nearly the same performance in terms of speed and reliability as comparable, but the sheer capacity per dollar of storage HDDs offer makes them a worthwhile purchase for those working with large amounts of data or particularly large projects.

The main difference between hard drives and more modern forms of storage is that HDDs physically write and encode data onto a disc while SSDs do not require any moving physical components to write and read data. Just as is the case with other crucial PC components, the hard drive you pick matters, especially if you are working with important files that cannot be easily backed up or replaced. Users will want a reliable drive that can deliver top-tier performance and longevity.

This comparison guide is going to take a detailed look at the two titans of high-capacity HDD storage: WD Blue & Seagate Barracuda. Both manufacturers produce a variety of drives to suit consumer needs, and there are some vital differences between the two that may influence user’s decisions.

The WD Blue and Seagate Barracuda HDDs are both aimed at average consumers and professionals. Both companies offer higher-capacity drives and ones with higher-grade components and speeds, but this guide is going to focus on the two main offerings from each company.

The WD Blue is a reliable drive that supports upwards of 6TB of storage depending on the RPM of the model. There are 7200 RPM and 5400 RPM options. What does RPM mean? As with other motors and devices, it stands for “Rotations Per Minute.” In short, the higher the number the faster that data can be written and retrieved from the HDD.

Meanwhile, the Seagate Barracuda drives also come in 5400 RPM and 7200 RPM models and can support upwards of 5TB of storage. The WD Blue takes a slight lead with a higher storage cap at this model bracket and price point.

Reliability is a loose metric that can vary from drive to drive as well as be dependent on the environment where the drive is stored. Cooler, dry environments are best. In optimum conditions, the drives are both rated for 600,000 load/unload cycles. Essentially, the drive can fully write and offload data that many times before it becomes at risk of corruption or data loss. Additionally, each company ensures its HDDs with a 2-year limited warranty that will cover any manufacturer defects or issues.

An HDD cache allows the rapid, at least in HDD terms, retrieval of short-term stored data. The larger the cache, the more can be pulled from at that increased speed. The Seagate Barracuda marches into the lead with a 128MB cache for their 2.5-inch drives. The WD Blue only has a 64MB cache. Now, the difference in speeds won’t be extreme. It’s the sort of metric that you won’t notice that much in general use unless you are really looking for it. One of the main advantages here is that the Seagate Barracuda can provide slightly faster startup times from rest mode due to the larger cache.

WD Blue drives tend to trend marginally higher in price compared to similar Seagate Barracuda options. The prices won’t be vastly different, but you can often get your hands on a Seagate Barracuda for a couple of dollars less than the WD Blue options. For example, a 2TB Seagate Barracuda can be purchased for right around $72 while the WD Blue 2TB drive is going for $74.99. With such close prices, it can often come down to buying whichever brand happens to be on sale at the time.

The Seagate Barracuda offerings inch ahead due to their increased cache, lower price, and more available smaller form factor options. It’s a close call. WD Blue makes fantastic products that users cannot go wrong with. It’s one of those scenarios where you’re stuck choosing between two fantastic options, and you can’t go wrong with either. I would suggest picking up the more affordable option of the two, which will more often than not be the Seagate Barracuda.