Odyssey G9 vs AOC AG493UCX – Which Ultrawide Monitor is Best? 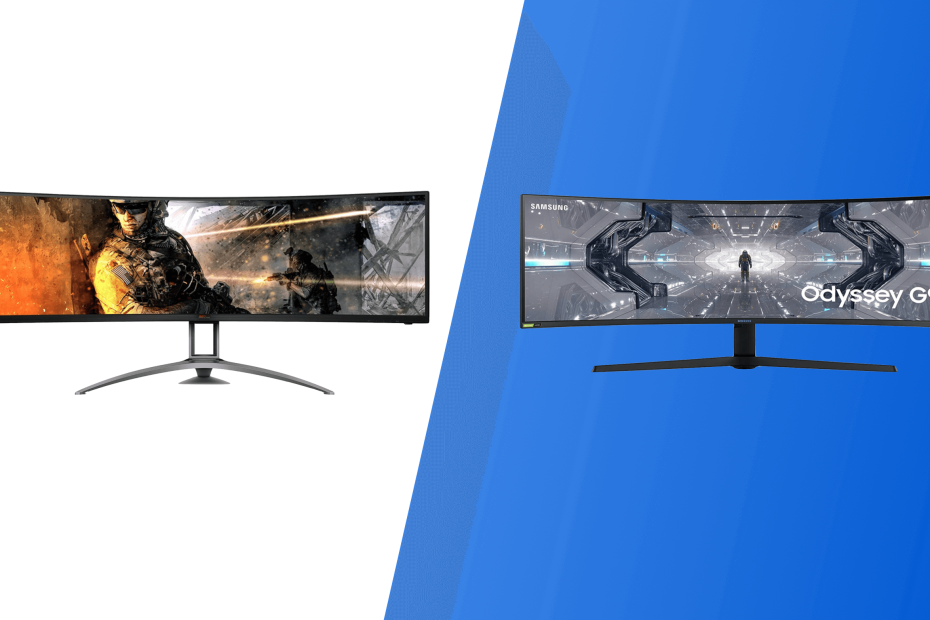 When it comes to the biggest and most immersive ultrawide monitors on the market, I immediately think of the Odyssey G9 and the AOC AG493UCX. If this comparison was just regarding the easiest to remember names then the Odyssey G9 would be the clear winner. A lot goes into making a competitive ultrawide.

This comparison guide will go over the key differences between these two flagship monitors. With the recent release of the Odyssey G9 Pro, these two monitors may come down to a more affordable value range in the coming months. However, you will be looking at a hefty investment with such enthusiast-tier hardware regardless of any minor price shift. This technology is still relatively new, so it will be some time before these hulking monitors come down to more reasonable consumer prices.

The Samsung Odyssey G9 has a very unique style that sets it apart from not just ultrawide options but also all enthusiast-grade displays. The stark white backing, turbine-like port with RGB, and a massive 1000R curve make this display a gorgeous addition to any battle station. It certainly stands apart from the much more subdued  AOC AG493UCX. It has a matte black finish that is certainly sleek and fits the gamer aesthetic, but it does not stand out nearly as much as the G9. This can be a good or bad thing depending on your individual setup and color preferences. With the G9, you are locked into that white design

Both monitors feature robust stands, which is necessary to hold up these weighty displays. Both can swivel and turn as much as you’d need, though vertical rotation is a tad limited for obvious reasons. The Odyssey G9 has a slightly better stand when it comes to cable management. It has a handly channel in the back where you can tuck your cables away out of sight. Just make sure to be careful, as you can stress the cords and connectors if you move the stand around too much when you do this.

Both displays feature massive 49” displays that will encompass your entire field of vision while gaming or consuming media. The AOC AG493UCX features a slightly less aggressive curve, though you would be hard-pressed to see much of a difference when sitting down to game on it. The AOC AG493UCX is much dimmer at 400 nits peak brightness while the Odyssey G9 hits 1000 nits peak brightness.

Each display sports the same lightning-fast 1ms response time, but the Odyssey G9 pulls ahead yet again with double the refresh rate of the AOC AG493UCX. The G9 can be clocked to 240Hz. Now, you will need to have a GPU capable of pushing this display to those staggering limits to make full use of it. As for resolution, both monitors are 5120 x 1440p.

Neither of these monitors are marketed as professional-grade displays for extreme color-accurate work like video or photo editing. The AOC AG493UCX covers ~120% of the sRGB color space while the Odyssey G9 is right around 98%. While the AOC is a tad more accurate, you will want to color calibrate either display manually if you plan to use them for complex work.

As for premium features, both displays support FreeSync, though only the Odyssey G9 supports G-Sync. Both support HDR, but the AOC AG493UCX has been shown underperforming with its usage of HDR. It doesn’t seem to appear as accurate or as crisp as other premium monitors like the G9. With the AOC AG493UCX having better color accuracy and the G9 having better premium built-in features, the two are neck-to-neck in this category.

An often overlooked area of an expensive display is the connectivity options. Both monitors have 2 DisplayPort connections, though the G9 only has a single HDMI connection compared to the two offered by the AOC AG493UCX. The AOC offering has 3 USB 3.2 downstream ports as well as a USB 3.2 upstream as well as an audio out. Meanwhile, the G9 only has 2 USB 3.0 downstream ports with no upstream options.

While this isn’t a connectivity option, the AOC AG493UCX does lack built-in speakers. However, it is likely that those spending this much on a display will have standalone speakers for it.

These are premium displays made for enthusiasts, and the price point reflects that. That being said, the AOC AG493UCX is the clear value option at $970 at the time of writing this review. That is compared to the much higher price point of the Odyssey G9 at $1,400. For such tightly matched monitors, the AOC AG493UCX is vastly more affordable at nearly a third cheaper than the Odyssey G9.

While the Odyssey G9 does offer some incredible features that place it above the AOC AG493UCX, the price point really makes the difference here. For nearly identical features, the AOC AG493UCX can be had for much cheaper.