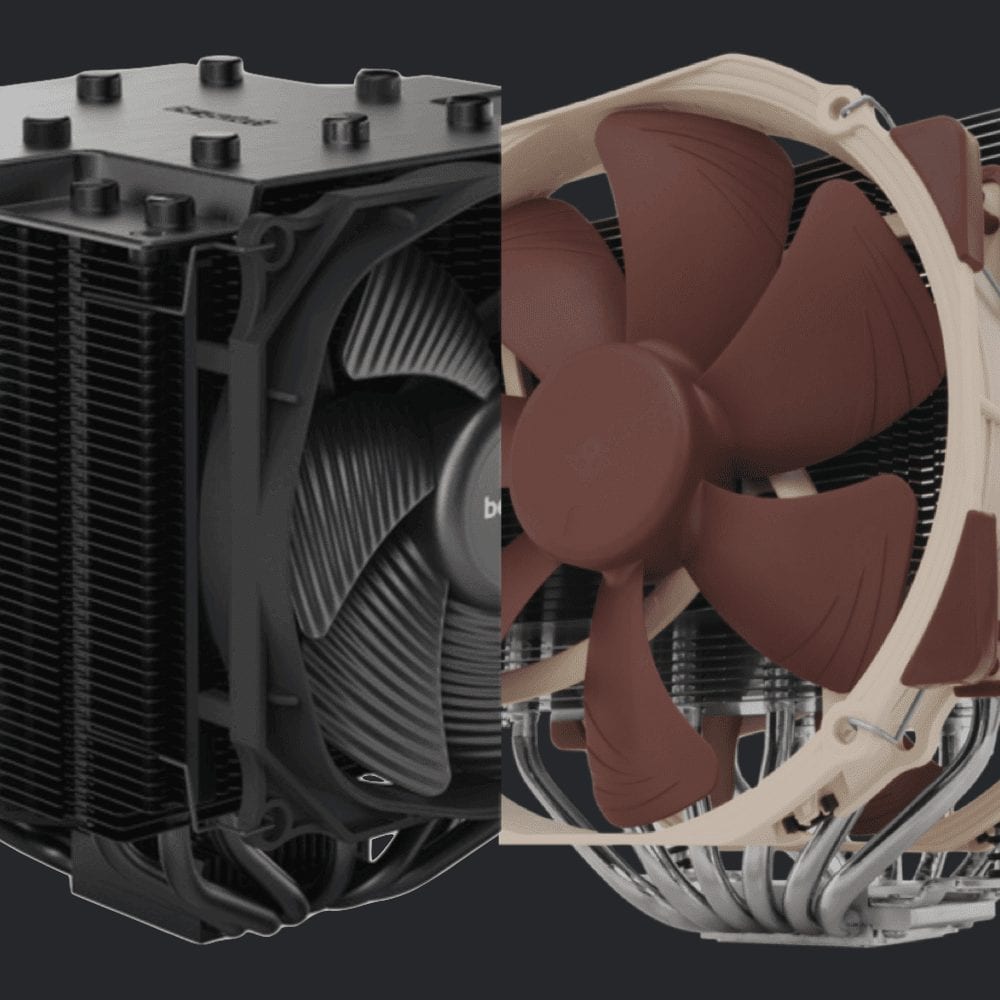 The Noctua NH-D15 and the Be Quiet! Dark Rock Pro 4 are the top 2 air CPU coolers on the market in 2019, and offer the absolute best cooling performance from an air cooled setup – with performance on par with most AIO systems. These two extremely popular CPU coolers for enthusiast level builds are often compared with one another, and many PC builders have the same question come up some time in their build – which cooler to go for?

In this guide we will weight up the benefits of choosing the Noctua NH-D15 over the Dark Rock Pro 4, and vice versa, to help you make an informed decision on which CPU cooler is better for your next PC build. Enjoy!

Overall, the performance between these two coolers is very very similar, with both the NH-D15 and Dark Rock Pro 4 offering cooling performance on level with 240mm AIO liquid cooled systems, and even some 360mm AIO systems! From an air cooler, it’s seriously impressive what Noctua and Be Quiet! have been able to do with these air CPU coolers.

Should users opt for the NH-D15, they should expect to see an approximate 1-3 degrees cooler performance under load when compared to the Dark Rock Pro 4. Obviously this depends on many other variables such as case internals, airflow and other factors that impact thermal performance. If you’re looking for absolute best performance and want to squeeze every possible drop of speed out of your CPU, then the Noctua NH-D15 will help you do this.

View the NH-D15 on Amazon

With very similar performance levels between these two coolers, the DRP4 actually performs marginally quieter at idle and load operation compared to the NH-D15. On general, you should expect to see a 1-3 decibel decrease when using the DRP4 instead of the NH-D15. A small amount, sure – but if quiet operation is one of your biggest considerations for your next build, then we recommend picking the Dark Rock Pro 4 over the Noctua NH-D15.

Unlike the NH-D15’s marmite looks that may not suit all, the Dark Rock Pro 4 is finished in a sleek, matte black finish that will look fantastic in any PC build. Black goes with everything, compared to the flagship Noctua brown that certainly does not – it comes down to personal taste with this point. If we were to pick a better looking CPU cooler, the Be Quiet! Dark Rock Pro 4 wins, hands down.

All-in-all, whether the DRP4 or NH-D15 is better for your next PC build really will come down to personal preference, they are both fantastic CPU coolers that offer on level (if not better) cooling that most 240mm AIO systems. You won’t get better air cooling performance for the price than these two coolers, it can really come down to personal preference of looks when deciding between the two. The Dark Rock Pro 4 offers slightly better noise performance than the NH-D15 at the same level, so if going for a quiet build is your main priority, then spend a few more bucks and go for the Dark Rock Pro 4.