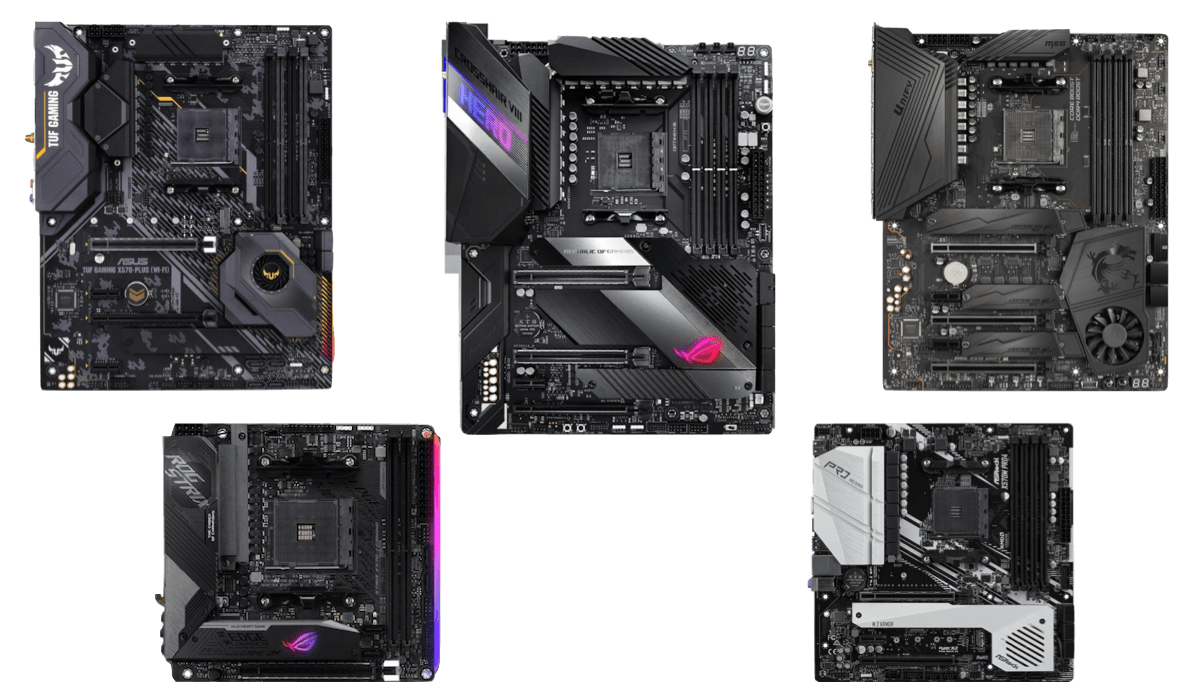 The X570 chipset has had about a year to mature with BIOS updates from motherboard manufacturers alongside AMD’s Zen 2 processors. We’ve also recently seen the release of AMD’s B550 chipset, the now the announcement of their upcoming Zen 3 processors. Considering these new developments, we’re going to reexamine our in-depth speculative analysis and comparison of the X570 chipset to offer you the best motherboard picks suited for any current or future Zen 3 Ryzen CPUs.

Our selections today are all more than sufficient for everything from general purpose use, gaming, overclocking, and productivity workloads with anything from Ryzen 3 through Ryzen 9, but first, an important note. Considering recent global trade and health events, in addition to the announcement of the Zen 2 Ryzen 5600X, 5800X, and 5900X processors, availability and pricing, especially for AMD components, is a little out of control. You always want to make your purchases as close to MSRP as possible regardless of anybody’s recommendations. If you’re impatient and can dismiss price increases upwards of 185-200% in some cases, if not more, then more power to you! However, we’d strongly recommend holding off on new builds or upgrades until things normalize and demand for AMD hardware dies down a bit. Still, retailer stock is getting refreshed as often as possible, despite these circumstances, so be sure to keep an eye on retailer sites and pounce on any deals you see. With that said, let’s get right into it, shall we?

Across the board (pun intended 😊), the Asus TUF Gaming X570-Plus is one of the most highly recommended and well-featured “budget” X570 motherboards on the market, coming in around $180. While we recommend opting for the standard variant, Asus also offers a Wi-Fi version for an additional $20 that otherwise has all of the same features and is on par with the best motherboards from other manufacturers at this price. Asus has been a top-tier pick for motherboards for quite a long time, and the TUF Gaming X570-Plus is evidence for why.

With the TUF Gaming X570-Plus, you not only get Asus’s stellar BIOS interface and features, but exceptionally robust specs overall considering the price. Features include a 14 Phase VRM (12+2), support for up to 128GB of DDR4-4400MHz memory, 2x M.2 slots, Realtek L8200A 1G LAN + ALC S1200A Audio CODEC, 3x USB 3.2 Gen 2 (1 is Type-C) + 4x USB 3.2 Gen 1 ports, and 8x SATA 6Gb/s ports. For new AMD builders getting ready for their first gaming machine, the TUF Gaming X570-Plus leaves almost nothing to be desired. You’ll also have an upgrade path to Zen 3, and for those with 300-series or 400-series boards and Zen+ CPUs/APUs, that means you can hold off on purchasing a Zen 2 processor if you haven’t already.

If you’re really looking to save a buck, then the Asus Prime X570-P is the best, cheapest, X570 board for properly driving even a Ryzen 9 3950X thanks to its VRM design, which it shares with the beefy Maximus XI Hero. If you don’t need troubleshooting features or cutting-edge connectivity and you just want support for a 3950X in a barebones production workstation, at the X570-P’s regular price point around $150, you cannot find anything better.

Our go-to pick for the best overall X570 board is the MSI MEG X570 Unify. For around $300, the X570 Unify is an excellent deal for a high-performance motherboard. MSI is regularly Asus’s best competition in the motherboard space, and its Unify series offers extensive feature-sets, fantastic performance, and beautiful blacked-out aesthetics for both Intel and AMD platforms. MSI also typically has BIOS interfaces that compete with Asus, which is a noteworthy consideration if you’re prone to spending a lot of time with your BIOS by overclocking. Another benefit shared with many Asus offerings is their proprietary motherboard software, Dragon Center, which allows for system tweaks in your OS, and some boosting/optimization features directed at gamers.

For overclocking enthusiasts who don’t have the supremely deep pockets necessary to purchase the X570 Aorus Xtreme or the MSI X570 Godlike, the Crosshair VIII Hero (Wi-Fi) readily competes in terms of VRM design and performance. For being so much cheaper than its direct competitors for “extreme” motherboards, the Crosshair VIII Hero (Wi-Fi) also exceptional features when compared to them or any other ATX X570 motherboard for that matter.

It’s extraordinarily rare for builders to have only one reasonable option for any motherboard/chipset combo, but mATX X570 is, unfortunately, one of those instances. Luckily, we have the ASRock X570M Pro 4. While mATX may not be the most popular form factor amongst PC enthusiasts, that doesn’t mean it is any less capable than standard ATX or mini-ITX. As ASRock continues to try and separate itself from its image as the “budget Asus” company, they continue to offer compelling picks with great price-to-performance value, and it so happens that they provide only one of two total picks for mATX X570. Regularly priced around $186, the X570M Pro 4 is thankfully a solid choice for builders looking to save some desk space without dealing with some of the tedious research and build requirements for mini-ITX systems.

The X570M Pro 4 comes with a 10 Phase VRM, support for up to 128GB of DDR4-4200MHz memory, 2x M.2 slots, Intel 1G LAN, Realtek ALC1200 Audio CODEC, 2x USB 3.2 Gen 2 (1 is Type-C) + 6x USB 3.2 Gen 1 ports, and 8x SATA 6Gb/s ports. While the Pro 4 is a relatively basic option, it is at least capable of handling even a 3950X with minimal compromise or necessary tweaking. While it’s, unfortunately, the only option for mATX X570, you do have another choice for a slightly shorter ATX X570 board: the Asus ROG Crosshair VIII Impact. The only caveat here is that the Crosshair VIII Impact is a Mini-DTX motherboard, and it is a bit more challenging to find mini-towers or SFF cases specifically designed to support Mini-DTX. If you’re in the market for a more premium motherboard that isn’t as large as standard ATX, but not as small and potentially frustrating as mini-ITX, then the Crosshair VIII Impact is the way to go.

Finally, for our small form factor (SFF) case lovers, the award for best mini-ITX X570 motherboards goes to the Asus ROG STRIX X570-I Gaming. The STRIX X570-I is the only mini-ITX board we’d recommend if you’re planning on building an SFF Ryzen 9 system, as it has the best power delivery of any mini-ITX X570 board by far. Due to the clever design and placement required when developing mini-ITX motherboards that can support top-tier CPUs, the STRIX X570-I isn’t necessarily going to break the bank around $260. We know that isn’t an amount to dismiss casually, but builders keen on mid to high-end Ryzen CPUs should be looking at this price range for their platforms anyway. Luckily, Asus gives you not only the best mini-ITX X570 board by comparison to others, but an excellent option compared to even many full-sized ATX motherboards.

With the launch of AMD’s B550 chipset, the X570 is looking forward to some fierce competition as we approach the release of the Zen 3 Ryzen 5000 processors – including the Ryzen 5 5600X, 7 5800X and Ryzen 9 5900X and 5950X. We’re confident this list will unequivocally provide builders with the best choices for X570 builds of any size, and while there may currently be some price and performance overlap with the new B550 chipset, there’s still plenty of reasons to go with X570.

Best Entry-Level X570: Asus TUF Gaming X570-Plus – Universal praise and excellent features for $180, with the option for a Wi-Fi variant for an additional $20. New and budget builders that want substantial out of the box performance that doesn’t break the bank need not look elsewhere. For those looking to save even more money who want barebones support for even a 3950X should consider the Asus Prime X570-P, which has the same VRM design of the beefy Asus Z390 Maximus XI Hero.

Best High-Performance X570: Asus ROG Crosshair VIII Hero (Wi-Fi) – An insanely cheap option compared motherboards like the Gigabyte X570 Aorus Xtreme or MSI X570 Godlike, yet it easily competes in terms of power delivery and available features. Unless you have money burning a hole in your pocket, or you absolutely must have the passively cooled chipset of the Aorus Xtreme, then there’s no better pick.

Best mATX X570: ASRock X570M Pro 4 – The only mATX X570 option from any of the reputable motherboard manufacturers, which is a rarity. Thankfully, the Pro 4 is a competent option for those fond of the mATX form factor that can handle up to the Ryzen 9 CPUs.

Best mini-ITX X570: Asus ROG STRX X570-I Gaming – While not the only mini-ITX X570 board, it is undoubtedly the best. Regardless of whether you’re looking to cram a 3950X in your SFFPC, we’d recommend the STRIX X570-I for most mid to high-end mini-ITX builds.