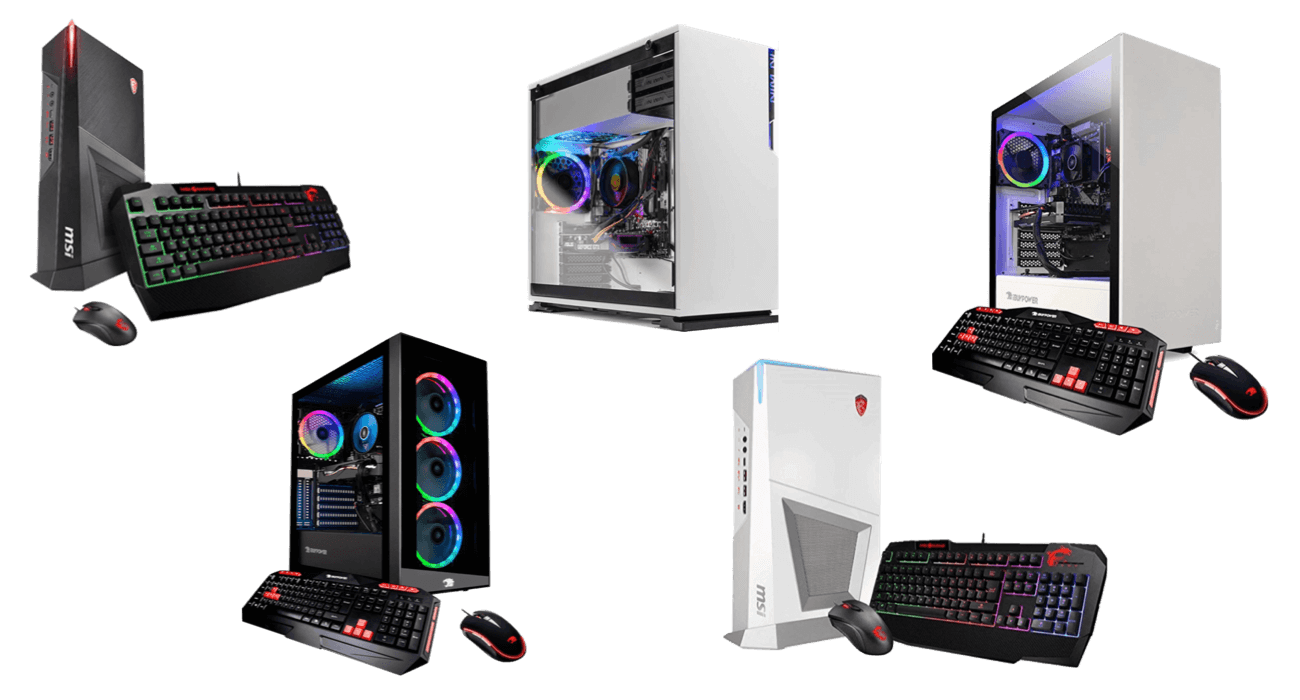 At PremiumBuilds, we often focus on individual components for those looking to build a PC themselves. And while the building community is strong and growing, many users do not want to have to deal with individual components and prefer buying a fully built machine. Or, for those looking to gift a new rig to a special someone, they might not have the technical know-how to build the right PC. So today, we are going to explore the best pre-built PC’s under $1000.

The reason we normally recommend to build your own rig if possible is because pre-built machines are known for cutting corners where possible to keep prices low. This often leads to cheaper parts for non-‘flashy’ components, like the PSU, motherboard, case, or RAM. So when we look at these best pre-builts, we will, of course, look at things like the GPU and CPU, but we will also pay particular attention to the PSU and motherboard to make sure we aren’t getting the absolute bottom-of-the-barrel parts that carry a higher risk of failure.

Best Gaming PCs under $1000 – Our Recommendations

The chief components for a gaming PC are the CPU and GPU, so for this AMD gaming PC, we want a Ryzen processor from either the 2000 or 3000 series, and a strong GPU to match. We want an SSD, but more for the operating system than for day-to-day usage as games can still be run from an HDD without major issues. We also want at least 16GB of RAM, but at this price point, not necessarily more as RAM over 16GB does not tend to improve gaming performance. As we said above, we also want a PSU that is at least 500W and hopefully certified 80+, as well as a motherboard that is not an OEM-style locked version. Luckily, one the PC builders at  Skytech seems to have one that fits the bill: the Skytech Shiva Gaming PC.

The major advantage of this pre-built PC is the balance between processor and GPU. Many gaming computers tend to overinvest in the CPU, which isn’t necessary unless you are building a very niche machine that needs to push 240hz for a CPU heavy game, like CS:GO. For the vast majority of other gamers, a stronger GPU is almost always more important for high FPS than a stronger CPU. So with this PC, which uses an RTX 2060, you have one of the newer generation RTX cards that will easily maintain 144FPS at 1080p. Paired with the GPU is a strong CPU, the Ryzen 2600. Despite being one generation old, this CPU will more than keep up with the GPU and should last for years thanks to its 6c/12t set-up. In terms of the other components, the Shiva uses a reliable motherboard based on the AMD B350 chipset rather than an OEM version, and the PSU is 80+ certified, so should also be reliable. The RAM is decently fast at 3000MHz and the 500GB SSD will also be plenty speedy, meaning you have an overall solid rig with great core components.

At almost exactly $1000, this rig fits perfectly into our budget limit. Keep an eye out for sales as the two core components are last generation and so might see some discounts as we move into the new year!

On the Intel side, gaming PC’s have started to see some pretty large reductions as we wait for the next generation Comet Lake. Intel still holds an edge for gaming PC’s thanks to its superior single-core performance, which games still rely on more than multi-threading ability. Having said that, the lack of cores/threads is sometimes seen as a downside for future proofing, and definitely has an impact in productivity workloads. But for a pure gaming machine like we are looking at here, the Intel options should be more than enough to power 144FPS at 1080p. And to do that, we recommend a rig from another of the biggest pre-built producers, the iBuyPower Element 9260.

The Element 9260 uses the 8c/8t 9700F, an interesting CPU that does away with the integrated graphics seen in most Intel processors. The 9700F is a locked CPU, meaning it is not able to overclock, but for someone buying a pre-built machine, we tend to see this as an advantage (due to its lower pricing) rather than a disadvantage. The other components, such as a 240GB SSD and 1TB HDD will provide plenty of storage, while the 16GB of 2666MHz RAM will be more than plenty for the Intel CPU (which are not as demanding in terms of RAM as AMD processors). Finally, the GPU is an Nvidia GTX 1660 Ti. While not as strong as the RTX 2060 in the AMD machine above, the 1660 Ti is still a very capable processor that will perform excellently at 1080p. To round it all out, the machine comes with plenty of RGB, a ASUS TUF motherboard in most cases for good reliability (or a similar equivalent), and a nice case with a big window. The PSU is maybe not ideal at 500W but without 80+ certification, but the warranty on the machine should reassure most users in case of a PSU failure.

At the same price as the AMD machine above ($999), these two machines are pretty close in terms of gaming performance. Games that prefer the single-speed CPU power of the Intel 9700F might see higher frames with the Intel gaming PC, but the stronger GPU in the AMD gaming PC is also a pretty important factor. We would probably give the AMD build a slight edge. But if you prefer the aesthetics of the Intel one, go with your gut and know you are still getting a lot of PC for the price.

For the workstation PC, we are looking for a different balance than we see with the gaming PC’s. The CPU becomes much more important, as does core and thread count. Similarly, the bigger the SSD the better, and 32GB of RAM would not be amiss for a machine dedicated to productivity style tasks. But luckily, unless you are doing quite a bit of rendering or machine learning, the GPU is not as important and can be reduced to save some money and reinvest in the CPU and other components. So with that in mind, we recommend another iBuyPower PC as our best workstation PC under $1000: the iBUYPOWER Elite ARCW 105A.

The biggest reason we recommend this PC is that it includes one of the best productivity CPU’s on the market in the Ryzen 3700X. The 3700X has an astounding 8 cores and 16 threads, which will be more than enough for the many of the parallel threaded/optimized productivity applications. The GPU is not necessarily the most exciting as a GTX 1660, but it should be more than enough for 1080p 60+FPS in case our productivity user likes to dabble with some gaming. The storage is not bad at 240GB SSD and 1TB HDD, but can always be updated later if there is need for more fast storage. Same for the RAM, which at 16 GB can be upgraded to 32GB if necessary later.

Now you might be thinking, why are we talking about upgrades for a $1000 PC? And the answer is simple, this PC comes in at a cool $899! That extra $100 might not seem like a lot, but is more than enough for both an extra 8GB of RAM and 500GB SSD, which would make this a very strong workstation PC for $1000, and is still a great choice without those add-ons at $899.

Some buyers also want to make sure their computer takes up as little space as possible. For builders, this is usually referred to as a small form factor (SFF) PC that relies on ITX-standard components to save space and fit into a very small case. SFF building is more expensive than regular building as some of the necessary parts are specialized, and not as many are produced. For someone buying a pre-built but still wanting that same minimalist size, we recommend looking at the MSI Trident line, which uses quality parts and offers pretty good value while coming in a very small form factor. Specifically, if we are strict with our budget, we recommend the MSI Trident 3 9SH-444US.

The 9SH (as we will refer to this machine), offers some high quality parts while sticking to a very small form. The Intel 9400F is low on cores, sporting only 6c/6t for its processing power, but is an efficiency master and should offer performance that is in between the 2600 and 3600 for most games today. The lack of hyperthreading may be a problem in future games that optimize for multi-threading application, but should be no problem for current titles. The GTX 1660 is similarly strong for 1080p gaming, and should offer high framerates in the majority of titles, especially with some tweaking. The MSI motherboard and 512GB NVMe SSD are similarly welcome and should provide plenty of power for the CPU and GPU to reach their full potential. And like the workstation PC above, the 8GB of RAM should not be too big an issue as this PC is also priced at $899, leaving us $100 in our budget to add 8GB more RAM and potentially a second SSD later on if we need more storage.

While we think the 9SH is a strong option, if you are able to stretch your budget to $1100, the next step up in the Trident lineup is a truly exceptional pre-built PC in a small form factor (and is a very aesthetic white design). The MSI Trident 3 Arctic 9SI-446US not only offers a nice upgrade to the GPU with a 1660Ti, but has the much more powerful Intel 9700F as well as the full 16GB of RAM we recommend. That’s quite a jump for $200, and worth saving an extra little while if you are able to swing it.

While we still recommend building your own machine for those that feel capable, but if you either are intimidated or just prefer the ease of having one warranty for an entire machine with a pre-built PC, these are some great options for under $1000 (or $1100 for the last option).

The main trick with a pre-built PC is to pay attention to the less glamorous components that are every bit as important to having a reliable machine. Many producers will try and lure you in with the CPU or GPU, but pay attention to the unsung heroes like the PSU and motherboard to really get the best value.