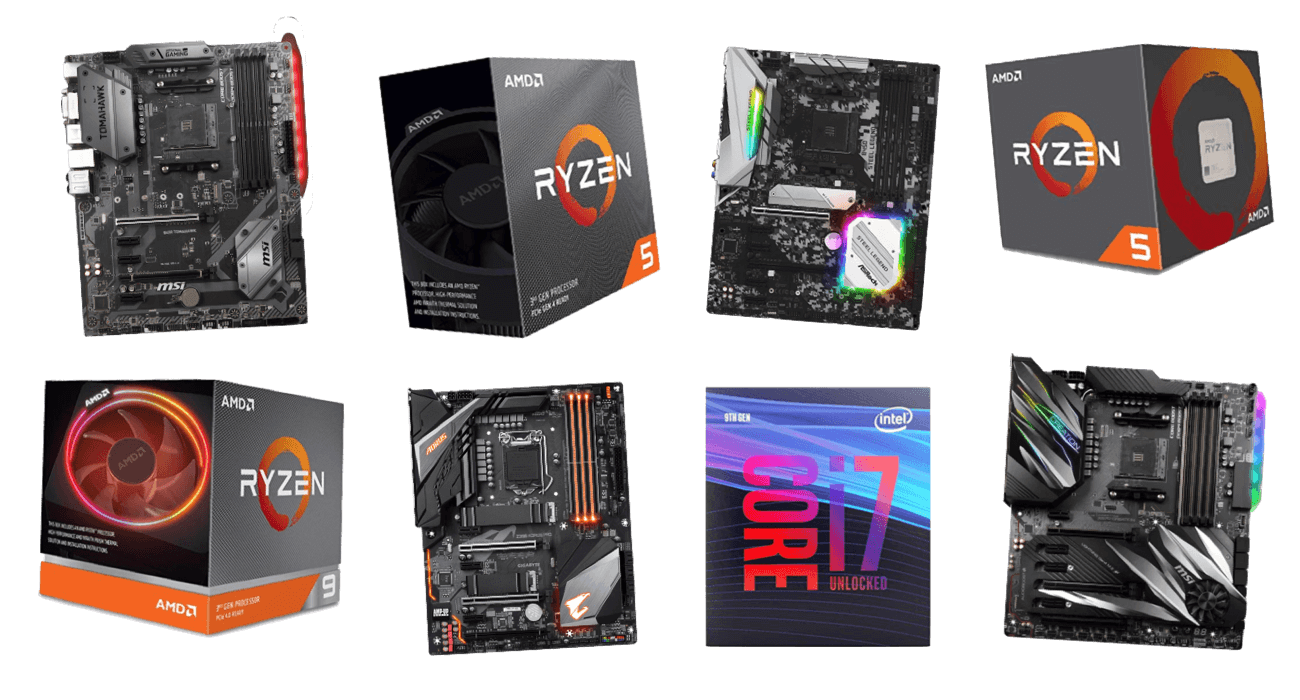 Here are our recommendations for the current best in class CPU’s and motherboards that will get the most out of them.

The release of the Ryzen 3000 series has rightly cemented AMD’s place as the CPU provider of choice. It has also lead to some severe price cuts to the outgoing Ryzen 5 2600. This CPU is still a fantastic performer offering all-round capability and an unbeatable value with 6 cores and multithreading, as well as decent clock speed. In gaming, basic video editing, home and office work this CPU covers all bases, and at around £110/$120 it offers outstanding value.

Another advantage of the matured product range of Ryzen 2000 series is the ready availability and wide choice of B450 motherboards. With a year for the product range to establish itself, there’s a board for all tastes. Here we’ve picked the ASRock B450 Steel Legend. Whilst it’s not the cheapest B450 board, the full feature set of 4 RAM slots, 2 m.2 slots (one is SATA only), high-quality audio outputs, USB C port, and premium looks with a  smattering of RGB mean that even a budget build won’t feel like corners have been cut.

The newly released Ryzen 5 3600 is the undoubted king of the mid-range price point. With this iteration, AMD took a huge leap forwards in moving to ‘10mn’ node size and refining the Zen Architecture dramatically improving the Instructions per Cycle of this CPU. This efficient, high-performance chip uses Power boost Overdrive to opportunistically self overclock, ensuring you’re getting the most of it as your usage demands. This CPU excels in gaming, achieving similar performance to 2018’s champion the intel i7-8700K but at a much lower price (and with a bundled cooler too). It’ll do content creation and general use too, so we have no hesitation in recommending it for a solid mid-range build. The 3600X offers a marginally higher boost clock and a better cooler but isn’t worth the premium in price over the 3600.

One of the few downsides of the Ryzen 3000 chip is the slight confusion around the motherboard compatibility – whilst AMD vaunt the cross-compatibility of the AM4 socket, the actual situation isn’t as clear cut with some B450 and B350 motherboards not able to take the new BIOS and microcode needed to run the 3000 series CPUs. For a period a very expensive X570 motherboard – including features unlikely to be used in a general-purpose PC – was the only certain answer. However, the situation has been addressed with MSI launching the ‘B450 MAX’ line of their popular Arsenal gaming range. These perfectly pitched motherboards allow you to reap the benefits of the latest Ryzen CPU’s without paying over the odds. The MSI B450 Tomahawk is a long-standing favourite with solid VRM and heatsinking helping solid overclocking performance. MSI state that their memory channel design enables RAM up to 4133mhz speeds and Bios Flashback is a handy quality of life feature allowing you to flash the BIOS from a USB without CPU or memory installed.

Despite Ryzens huge step forward this year, intel remain top of the tree where out and out gaming performance is concerned. The i9-9900k is undisputed frame rate champion in almost all games, and its lead only extends with an overclock. 5ghz is a reasonable target for these CPUs, adding 10-15% to stock performance. It is, however very pricey, meaning the smart money is on the Intel Core i7-9700k. This CPU lacks multithreading but retains 8 cores, meaning that in almost all cases it performs equally to its flagship bigger brother. In fact, because the per-core Cache memory isn’t split between multiple threads there are circumstances where it eeks out a marginal lead. Factor in the lower power consumption and corresponding thermal output, and invulnerability to the various SMT side-channel security issues, and the i7-9700K makes perfect sense in a high-end gaming rig. If you’re going to use creative software, rendering, or aim to play games where multithreading gives the i9 an advantage then, by all means, spend the extra, but for a high-performance gaming rig, our money goes firmly on the i7-9700k.

Gigabyte really aced their Intel Z390 chipset products across the board. They all feature best in class Voltage Regulator Module (VRM) design, which is important when you’re looking to overclock power-hungry chips like Intel’s 8 core Coffee Lake refresh offerings. Their ATX products are tightly grouped and it takes a good game of ‘spot the difference’ with the specification sheets to pick a winner.

Our choice goes to the GIGABYTE Z390 Aorus Pro which boasts a strong 12+1 Phase VRM with heatpipe balanced heatsinking for the MOSFETS and promises support for a 5ghz all core overclock (CPU silicon quality permitting). Dual Bios gives you a fallback option should you overcook your settings whilst playing with advanced overclocks. Eight fan headers, 2 pump/fan headers all of which can control DC or PWM fans, and 8 thermal sensors let you control case temperatures to your heart’s content. The physical design has been beefed up as well with two metal shrouded full-length PCieslots which support the weight of a pair of chunky GPU’s if you’re opting for the SLI route, as well as metal braced RAM slots. It has high-quality Audio codec chips as well as a plethora of I/O options. Importantly the Pro offers a USB-C port on the rear panel, a feature lacking on the similarly priced and specified Elite model. If you need Wifi and Bluetooth there is a version of the board with those features embedded.

This is a versatile, good looking and full-featured motherboard at a keen price, and makes a perfect pairing with the 8 core intel 9000 CPU’s to provide the basis for a powerful gaming PC.

AMD Complete the near clean sweep of the ZEN 2 CPUs’ with the Ryzen 9 3900X. With 2 CPU ‘dies’ on a single processor, they’ve been able to offer 12 cores and 24 threads at a very attractive price. This CPU will render, edit video, crunch numbers and even game with the best of them thanks to a 3.8ghz base clock and 4.6ghz boost. Again, Precision Boost Overdrive and XFR2 help optimise performance, and it even ships with a reasonable cooler although for any workstation we’d advocate a higher-end offering for quiet reliable operation. In fact, given the strength of this CPU and the 3950X, it’s hard to imagine there’s much market left for AMD’s upcoming Threadripper CPUs. Still, that’s AMD’s problem, not yours!

What do you pair with the CPU that can do it all? How about the motherboard that has it all. The MSI X570 Creation offers just about every bell and whistle you can squeeze out of the X570 chipset. It’s got 3 full-length PCIe slots enabling multi GPU set ups for rendering or twin Nvidia GPUs for SLI gaming and incorporates the yet to be fully utilised PCIe 4.0 standard. It includes Wifi 6, 1x 1 gigabit and 1 10 gigabit LAN ports, extremely high-end audio, and even a ‘cartridge’ M.2 expander board that adds 2 m.2 slots for a total of 4 possible NVME SSDs. The rear I/O panel is one of the most impressively festooned we can recall seeing. Quite frankly, if this board can’t do it, then you don’t need to do it. And that’s the kind of versatility a creator is looking for. Only the price might push you a bit further down the product tree but for a power user, the features on offer do justify the £450 asking price.