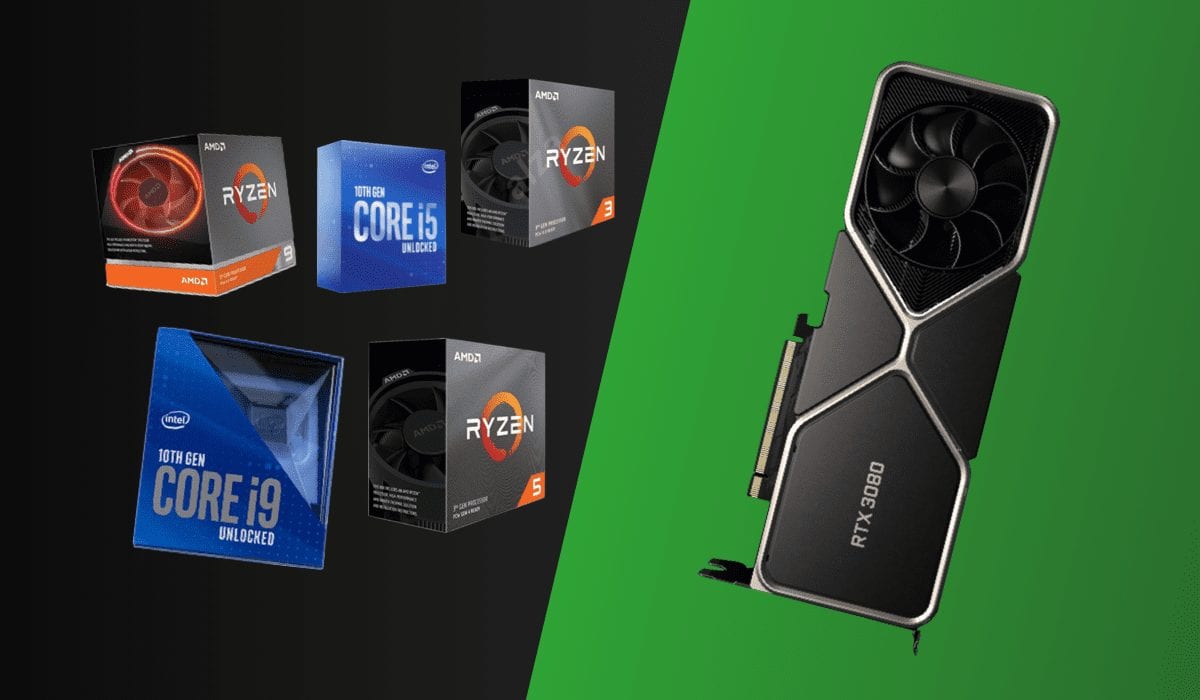 Ampere is here and pushing graphics performance even higher. If you’re looking to snag one of these GPUs to upgrade your system, you’ve probably asked yourself the question ‘will it bottleneck my PC’? You might even have found some sites that claim to put a figure on the degree of ‘bottleneck’ you’ll encounter.

On the face of it this seems a simple question but the reality has some depth to it. But don’t worry – in this article we’ll help you understand what ‘bottleneck’ actually means in the context of your PC’s performance, and we’ll describe two simple tests you can do right now to understand if your PC is up to the task of getting the best from an Ampere GPU – including the RTX 3070 and RTX 3080. We’ll also explain why you should ignore any site that presents a bottleneck as a simple percentage.

Contents hide
1 What is ‘a bottleneck’?
2 So, how can you tell if you’ll run into issues after a GPU upgrade?
3 Some general guidelines around Bottlenecks:
3.1 Resolution:
3.2 Game Genre
3.3 Settings
4 Conclusions:
5 Related

What is ‘a bottleneck’?

A ‘bottleneck’ is commonly referred to when a CPU isn’t deemed powerful enough to allow a graphics card to reach its full potential. People often comment as if a bottleneck is both a fixed situation and also a major detriment to performance in a system. Neither of these is always the case. In reality, some component of your system will always limit its ultimate performance. It may be the CPU but in most games, it should usually be the GPU. Additionally, many game engines simply won’t allow a game to run to full potential either due to current hardware limitations or simple speed capping in the game engine itself. The factors dictating performance limitations actually change all the time, and it can swing between being the CPU, GPU and engine all in the same game depending on the situation. Resolution and settings are also of key importance because a GPU heavily loaded driving a 4k monitor will limit performance much more than the same GPU at 1080p with just a quarter the rendering load to complete. This is why you’re actually much more likely to encounter the CPU limiting performance on a PC running at 1080p than a higher resolution, particularly if you buy a high-end GPU like an RTX 3070 or 3080.

In most games, most of the time, we want the GPU to be fully utilised. This means you’re getting full value out of the GPU and that performance will be smooth and frame times consistent. If you do run into a situation where you are CPU limited that’s when performance becomes inconsistent with frame drops, stutters and inconsistent frame times. It’s the fear of this happening that leads people to consider whether a GPU upgrade might cause them to be ‘bottlenecked’.

So, how can you tell if you’ll run into issues after a GPU upgrade?

A simple test can determine broadly whether your CPU is fit for purpose, and you can do it now without spending any money.

Using a game that is representative of the games you enjoy playing, just turn settings and even resolution down to medium or minimum, and resolution down to perhaps half your normal screen resolution. Yes, this will look terrible, but that’s not the point! Now, play for a while. Consider the fluidity of the gameplay, whether there is any stutter or lag, and if the frame rate you perceive is acceptable to you. If the game plays smoothly and at a good frame rate then your CPU is capable of running the game engine well enough when not bound by the GPU. This is indicative of it being capable of supporting a more powerful GPU without issue. However, it is possible that you artificially create a CPU limitation doing this test giving poor performance when in fact the CPU will cope just fine with a graphics card upgrade. If so the next test can resolve that for you.

Find a game that’s representative of the games you enjoy playing or just your favourite game, and has representative benchmarks available online with the GPU you’re considering buying. Install MSI Afterburner. Click the settings ‘cog’ icon and under the ‘benchmark’ tab you’ll find 2 fields for ‘start’ and stop’ keybindings and a location to save a text benchmark file. Set the key bindings to keys that work for you and set your preferred file location. With afterburner minimised, again turn settings down as before and start playing the game. Benchmark for a minute or two over a representative section of gameplay using the ‘start’ and ‘stop’ keys that you assigned. You can do this more than once and Afterburner will append new sections to the .txt file so long as you don’t have the file open otherwise Afterburner is unable to write to it. Now, open the benchmarking text file and take a look at your results. Don’t worry too much about the 1% and 0.1% lows – those are the numbers that can be negatively impacted if you’ve hit a CPU limitation. Check the average framerate figures. Now go and look at the benchmarks of the game on the GPU you’re considering, at your target resolution. So long as your CPUs’ average frame rate exceed those benchmark numbers, your system is capable of supporting the GPU you’re considering.

Some general guidelines around Bottlenecks:

We’ve explained how CPU limitations occur owing to a number of variables, so let’s discuss whether they may apply to you.

By far the biggest factor is the resolution you run: 1080p is much less demanding on the GPU than 1440p or 4k, and so you are much more likely to run into a CPU limited situation at this resolution. Given the high FPS that even mid-range GPU’s can generate at 1080p you need a fast CPU to keep up – and this is counterintuitive because 1080p rigs tend to be the entry-level to PC gaming and utilise lower-cost components. Thankfully current affordable CPUs like the Ryzen 3600 are plenty capable of running titles to high framerates but older CPUs may not be.

It may be that a better solution than a CPU upgrade is actually a monitor upgrade: If you’re looking to move to an Ampere GPU then they really aren’t able to use their full potential at 1080p and many systems will struggle to support them. Rather than spending $300 on a new CPU and motherboard to try and increase frame rates, you may find more satisfaction in moving to 1440p and enjoying higher graphical fidelity – you CPU will likely be much happier running moderately high framerates in a GPU bound situation. You can see our recommendations for monitors for Ampere RTX 3070 and RTX 3080 builds here.

Simulators are also often very demanding of the CPU with complex physics models running in the background. Flight Simulator 2020 is a classic example of a game that is heavily CPU limited, and you can read more about our analysis of it here. If you’re building a sim rig you need to allocate sufficient budget to get a high-performance CPU and upgrading to Ampere may be the catalyst to refresh your platform.

We all want to experience the best that games have to offer but turning every setting to Ultra can be a serious detriment to performance. It’s perhaps a shame that GPU benchmarks usually concentrate on ‘ultra’ settings to best demonstrate the difference between GPUs when that means you can’t accurately gauge expected performance on high settings. This is further complicated with Ampere owing to a number of RTX and DLSS 2.0 enabled titles. These settings can dramatically alter performance for better (DLSS) or worse (RTX) and usually work best hand in hand – but comparatively few titles employ these technologies meaning we fall back to basic rasterization performance.

The great thing about GPU performance is that it’s fully within our control. You can decide to trade performance for visual fidelity until you arrive at a balance that’s right for you so don’t be scared to dig in and see if you can tweak things. Remember: If you’ve got a powerful GPU and are experiencing stutters from a CPU limitation it’s possible that raising graphics settings may actually improve the performance of the game!

We hope this article has given you a better understanding of the factors that can lead to a CPU ‘bottleneck’ in your system, and given you a couple of tools to help your purchasing decisions. If you have a 1080p monitor and play high FPS E-sports then it’s likely an Ampere GPU may cause a CPU limitation. You can look for a more suitable GPU pairing or perhaps consider upgrading your monitor alongside the GPU purchase.  You have a Ryzen Zen+ or Zen 2 CPU, or an Intel 14nm CPU with at least 6 cores and play at 1440p or higher resolution then in all probability you will not suffer any CPU limitations with an Ampere GPU and you can upgrade with confidence. If you have an older CPU (Ryzen Zen 1, Intel from Pre 2016) or a 4-core CPU and play at 1080p or 1440p then there’s a good chance you may experience some CPU limitations as modern games overwhelm your CPUs capacity. Consider running the tests described in this article to gauge your system’s performance and help you decide whether to upgrade.

Finally, if you’re planning a whole new build to take advantage of an Ampere GPU then consult our build guides for recommendations of great CPU pairings with these new top tier graphics cards.