AMD vs Intel: Which is Best for Gaming? 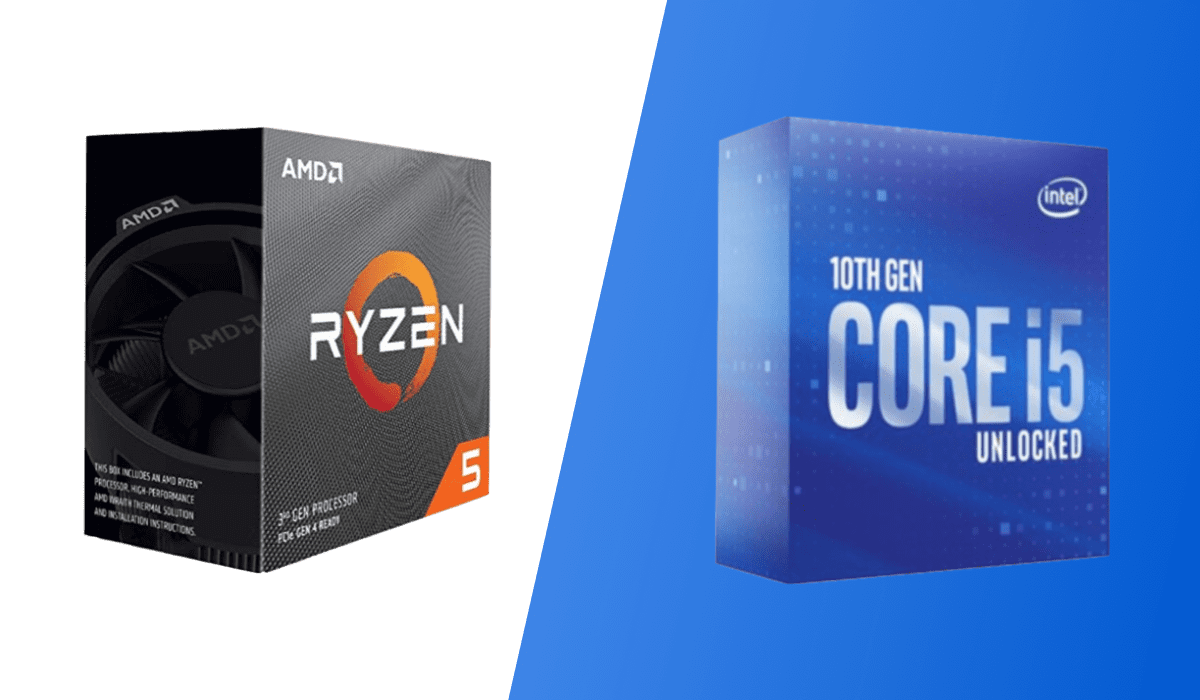 This is a question which will not die until desktop gaming dies. It’s not a bad question by any means, but the typical answers are lacking and might even be bad advice. The consensus today is that AMD is the best for gaming, and before that it was Intel for many, many years. Now, to answer this question, I could just take all the Ryzen 5000 reviews and average out the results, but there’s a clear problem with that: the reviews aren’t consistent. They do consistently agree that Ryzen 5000 CPUs are in the lead, but they can’t agree by how much. Yet most reviewers were pretty consistent on RX 6000 vs. RTX 3000 around the same time, so what gives? Solving this conundrum is key to understanding which gaming CPU is best. Yes, I am going to get very technical in this article, so if you just want to know which one is better then feel free to skip to the end.

Contents hide
1 Why are gaming CPUs good at gaming?
2 Why are the benchmarks inconsistent?
3 Pricing
4 Platform
5 Other things
6 Verdict: AMD and Intel are both fine
7 Related

Why are gaming CPUs good at gaming?

Firstly, what even makes a CPU good at gaming? AMD’s last generation of Ryzen CPUs, the 3000 series, was well ahead of Intel in almost everything with the very notable exception of gaming. Games are, by nature, highly dependent on good latency, and they also tend to not use many actual resources. A long 4K video taking about an hour to render is pretty good, but gamers want a brand-new frame at least every 33 millisecond (which translates to 30 FPS) and most PC gamers want a new frame every 16 ms (60 FPS). There is very little time create a single frame, but thankfully game applications don’t ask very much of the CPU; to get the job done, all the CPU needs to do is handle a small amount of data, do a little math on it, and communicate that to the rest of the system.

Ryzen 3000, despite its beefy cores, suffered in gaming because of one of its key design features: the core complex (or CCX). One of the building blocks of modern AMD CPUs is the CCX, which from 2017 to 2020 was a group of 4 cores (or 2 cores in some very low-end CPUs). A CCX has components like cache which are normally shared across the entire CPU. To add more cores, AMD has to add more CCXs, which works very well for tasks which demanded large amounts of resources. However, the CCX has a fatal flaw; when a core within one CCX needs to communicate with a core in another CCX, there is a high amount of latency. Non-shared cache was better than having less cache (because asking the RAM for something takes forever), but shared cache would have been so much better.

This is the key reason why AMD struggled to catch up to Intel in gaming despite introducing new instructions, new features, bigger cores, and more cores. Though Intel did not change the design of its cores for 6 years, their CPUs were able to stay ahead because they had very low latency from core to core and from core to RAM, and they had sufficient amounts of resources. Any AMD CPU with more than 4 cores had to use multiple CCXs, which severely impacted gaming performance where more than 4 cores was needed. While Intel’s old Skylake cores could not match AMD’s modern Zen 2 cores in most applications, if latency was at all important, then Intel would be able to stay ahead or at least be competitive.

In 2020, AMD flipped the tables with Zen 3. They enlarged the size of the CCX to 8 cores, and consequently all Ryzen 5000 CPUs with 8 cores or less have just one CCX and a single block of cache. Now AMD is on top in gaming thanks to the combination of low latency and a massive amount of cache. Meanwhile, Intel’s new Rocket Lake based 11th gen actually lost ground in some games compared to their previous 10th gen, because their new cores increased latency by a significant amount.

Why are the benchmarks inconsistent?

A good gaming CPU has low latency and the right amount of resources for certain tasks. So why is the benchmarking data for this all over the place? Well, here’s the other piece of the puzzle: games aren’t demanding much if any more resources from the CPU in order to increase the framerate. You can test this yourself in any game of your choice. Open up MSI Afterburner or even Task Manager and monitor CPU usage and power consumption. Then, set a framerate cap using your driver suite or third party software (MSI Afterburner also comes with Rivatuner which can limit the framerate). If you steadily increase the framerate, CPU usage doesn’t go up very much and neither does power consumption. This is very much unlike GPUs, which would have to increase resource and power consumption to achieve higher framerates, assuming there’s still headroom for more frames without decreasing visual quality settings. If GPU Alpha is twice as fast as GPU Beta at “ultra quality”, it’ll probably be about twice as fast at “high quality”. But CPU Gamma and CPU Zeta might be the same performance at both presets, or maybe they’ll be the same performance at “ultra quality” but suddenly show a gap at “high quality”.

CPU gaming benchmarks are complicated by the fact that there is a limit to how many frames a CPU can create in each game. You can’t just keep tweaking settings to decrease the load on the CPU when there are few if any of those settings to tweak, and even if there were, reading and executing code is always going to take up some time because the code might be imperfect or because there’s no hardware acceleration. The basic rule for CPU benchmarking is that, as the framerate on the fastest CPU increases, the gap between it and slower CPUs will also increase. Let’s say CPU Gamma can do 240 FPS while CPU Zeta can only do 200 in a certain title. They can both do 200 FPS, however, and if the GPU isn’t fast enough to output more than 200 FPS, the two CPUs will appear to be equal. But if the GPU is fast enough for 240 FPS, then suddenly there’s a noticeable gap between CPU Gamma and CPU Zeta, and this is exactly what is happening with the Ryzen 5000 reviews. Most of the reviews which find little difference between AMD and Intel are only getting 200 FPS or less on the fastest CPU, while the reviews which find a big difference between AMD and Intel are seeing the fastest CPU reach at least 500 FPS.

In the most absolute sense, AMD is the clear winner for gaming. Even at its worst, Ryzen 5000 is tying Intel CPUs, and at its best it can be faster by 30% or more and approaches 1000 FPS in titles like Strange Brigade. I’ve linked to Anandtech’s review here because it gives such good insight into CPU performance and how it varies depending on test conditions. But here’s another question: does it matter? Gaming monitors only go up to 360Hz, and it’s unlikely that anyone but an esports professional can notice the difference between a frame coming every single ms vs. just every three ms. If you just want 120 FPS or even just 60, then plenty of recent CPUs can do just fine.

If performance is pretty much fine across the board, then we need to find a different angle. Pricing is a much more interesting discussion for comparing AMD and Intel. In today’s market, when supply is good, CPU pricing for prior generations is pretty good. I would regard Ryzen 1000, 2000, and 3000 as generally being the best value (especially in the used market, Intel CPUs retain their value far too well), but Intel 8th, 9th, and 10th gen can be worthwhile if you want a consistently higher framerate; previous Ryzen CPUs can struggle in certain games and only Ryzen 3000 is truly competitive most of the time with Intel. That being said, all of these CPUs should reliably do 60 FPS gaming but only if they have 6 cores. 4 core CPUs can perform well but newer games are starting to demand resources which few 4 core CPUs can muster. Even a cheap 6 core CPU is a good investment.

The platform differences between the two are also really important. I would again consider AMD to be the better choice here, because AMD offers more features, and the single most important feature here is the Ryzen upgrade path. A budget PC gamer might decide to go with a Ryzen 5 2600X and a B550 motherboard, and down the line they can upgrade to a 2700X, or any Ryzen 3000 or 5000 CPU. Intel’s upgrade path is more limited, as their 8th and 9th gen CPUs are limited to 200 and 300 series boards, and they’re both architecturally identical. 10th gen is alongside 11th gen on the 400 and 500 series boards, but 11th gen isn’t much of an upgrade from 10th. This, not pricing, is the most important reason to go with AMD, in my opinion.

Finally, we can’t forget about things that some users might care about even if they’re not related to gaming. Intel CPUs perform well enough but AMD is significantly ahead in several types of applications; thankfully, these are usually hobby or work oriented applications for things like rendering, so casual users won’t need to worry. Intel CPUs also consume quite a bit more power than Ryzen 3000 and 5000 CPUs and consequently require better power supplies and cooling. If you want to build a small form factor PC (or if you just want less heat in general), AMD is a better bet.

Verdict: AMD and Intel are both fine

Generally speaking, I think older AMD Ryzen CPUs are the most ideal for the budget-conscious gamer, but it’s not like buying Intel is a waste of money. In this market, Intel might be your only option depending on what the supply looks like, and if you’re just gaming, then it’s honestly not a bad choice. Really, choosing between AMD and Intel is like choosing between different kinds of pizza; they’re both pizza at the end of the day and they’ll taste pretty much the same. Buy a Ryzen 5000 CPU if you need every single frame possible. Buy Intel or Ryzen 3000 if you want more than 120 FPS reliably. Buy Ryzen 1000 or 2000 if you’re comfortable with 60-120 FPS. Finally, make sure whatever CPU you buy has 6 cores. That’s really all you need to worry about, and if you follow these simple guidelines, you should have little issue gaming the way you want to.