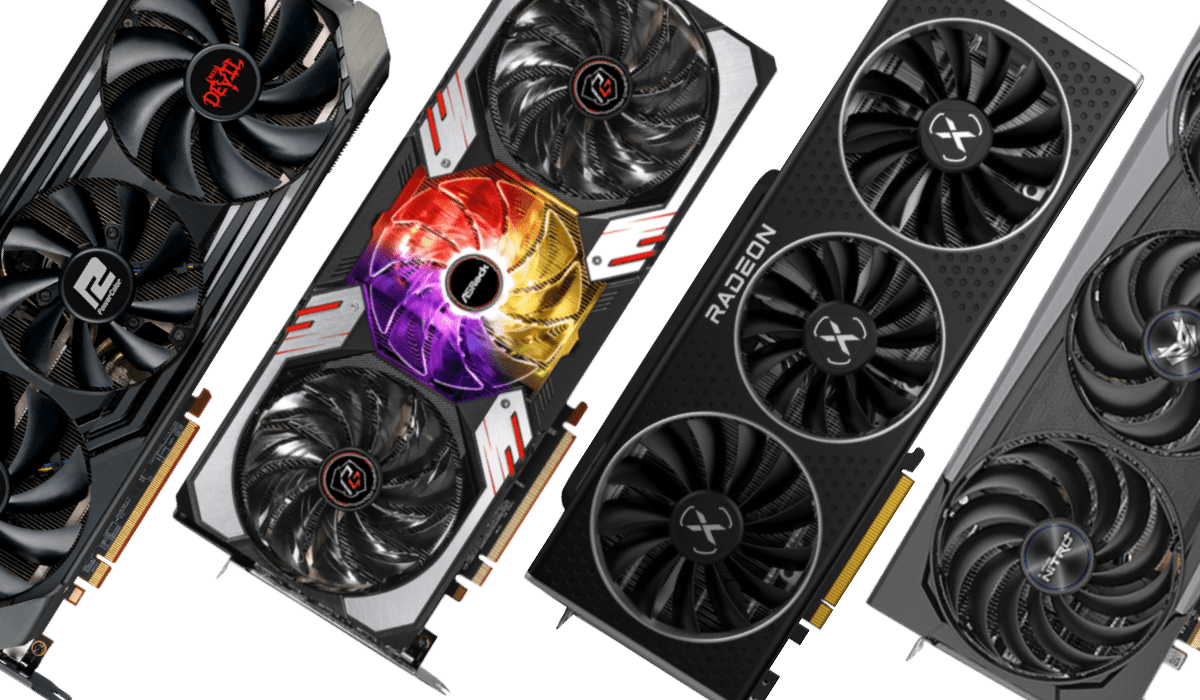 Despite having the same form factor and thermal design power than its lesser counterpart, the RX 6800 XT, this GPU achieves higher framerates in both 1080p and 1440p – according to benchmarks by Techspot – where it holds the highest scores out of all currently available GPUs. In fact, it even surpasses the Nvidia GeForce RTX 3090 in both of these resolutions while costing 33% less. It only trails the GeForce RTX 3090 in a 4K resolution by about 5% (108 FPS vs 102 FPS).

Of course, the clock speeds, display connectivity, cooling solutions, physical dimensions, and price will all vary depending on the aftermarket model of this GPU; as several manufacturers will strive to create a unique housing for this graphics card in order to outsell their competition. To help you choose the best AIB model for your needs, we have compiled a list of all currently announced RX 6900 XT aftermarket models, together with all the available information and specifications that make each variant unique.

ASRock will be releasing two aftermarket Radeon RX 6900 XT models: the first is yet to be announced (though will most likely be the Taichi X OC), and the higher-end model, the ASRock Phantom Gaming D OC.

Like most air-cooled RX 6800 XT models, it will have a three-fan cooling system using ASRock’s striped axial fan design, that utilizes polished surfaces and PWM controls, a three-slot heatsink with V-shaped fins and air vents for better cooling efficiency, a nickel-plated copper base that includes an ultra-fit heatpipe surface (to maximize the contact area), a nano-technology enhanced thermal paste, and thermal padding that is placed onto key components that are known to get hot during operation. This cooling solution is held together by a reinforced metal frame and a metal back plate (that is, oddly-enough, not ventilated).

In terms of aesthetics, the Phantom Gaming D OC features an ARGB-lit display on the side of the shroud as well as an illuminated middle fan that has translucent blades. There is even an ARGB pin-header that you can use if all your motherboard’s headers are occupied. Another neat feature is a physical LED on/off switch that it includes, so if you’re not a fan of RGB displays, you can simply turn it off while initially plugging in the GPU and never have to deal with it again. But, for those that want to make the most out of the ARGB displays, ASRock’s Polychrome software can be used to customize the lighting displays – while ASRock’s Tweak 2.0 can be used for adjusting the clock speeds and monitoring system metrics.

Other than that, the ASRock Phantom Gaming D OC has a Dr.MOS integrated power stage, 90-amp power chokes, Nichicon 12K black caps, and a 2 oz copper PCB. A overall respectable offering by ASRock.

This model will feature increased clock speeds of 2,105 MHz (game clock) and 2,340 MHz (boost clock) – similar to the aforementioned ASRock Phantom Gaming – and a triple fan cooling design: with the two outer fans being 100 mm in diameter and the central fan being 90 mm in diameter. These fans include double ball bearings, PWM controls, and angled-down fan blades that PowerColor claims provide 60% higher static pressure, due purely to their unique physical shape. The triple-slot vertical aluminum heatsink also includes a direct touch copper base for better heat dissipation.

A unique ARGB display decorates the exterior of the Red Devil: Six fin-shaped connectors, between the faceplate and the backplate (on the side opposite of the I/O ports), that are illuminated in colors that can be customized via the Devil Zone RGB software. The reinforced backplate also has a PowerColor Devil logo that is ARGB-lit.

When it comes to overclocking, the Red Devil also includes a Dr.MOS integrated power stage and an impressive 14+2 phase VRM. A physical switch even allows one to change between Silent and OC mode; the former option throttling clock speeds for the PWM controls to kick in.

The AIO cooling solution includes a single, blower-style, onboard fan, and a custom-designed cold plate that is connected to a 240 mm radiator via 600 mm tubing – making it compatible with even EATX chasses and alternative mounts. The radiator is cooled by two 120 mm ARGB fans and, because of it off board liquid cooling, this GPU has a 2.2 slot low profile heatsink. The FanConnect II feature provides additional cooling flexibility, allowing you to connect two case fans directly to the GPU, so that they can share its PWM controls.

ARGB displays include: the faceplate of the ROG Strix LC Gaming, a ROG Strix logo featured on the side panel, and ARGB rings illuminating the translucent blades of the two fans cooling the radiator. These displays can be customized via ASUS’s AURA Sync software, while system metrics can be tuned via GPU Tweak II. Additional bundled software includes wtfast (a private network for gaming) and a free XSplit license (streaming software).

An exclusive AMD AIB manufacturer, Sapphire is based in Hong Kong and is set to release the Nitro+ OC Radeon RX 6900 XT.

The cooling solution of the Nitro+ includes three, double ball bearing and hybrid-bladed, fans that combine the shape of traditional axial fans together with a blower-mount design. It also has integrated K6.5 thermal pads, a triple-slot heatsink with V-shaped fins, and a ventilated backplate.

In terms of ARGB flare, the Nitro+ has displays both on the side of the shroud (a Sapphire logo and lengthwise strip) as well as on the backplate (a Nitro+ logo).

With a host of additional features, a great thermal solution, and a triple BIOS switch (Performance, Silent, and Software Switch Mode), the Sapphire Nitro+ is a solid AIB model for the Radeon RX 6900 XT.

The only North American manufacturer to announce a Radeon RX 6900 XT aftermarket variant is XFX, set to release their Speedster MERC319.

Just like the PowerColor and ASRock AIB cards, the Speedster MERC319 has increased base, gaming, and boost clock speeds of 1,925 MHz, 2,105 MHz, and 2,340 MHz respectively.

The cooling solution of this GPU features three fans, the middle being smaller than the outer two, and all of which feature double ball bearings, 13-blades, and PWM controls. It has an aluminum cast shroud, seven aluminum plated copper heat pipes, a rigid aluminum cast tray, a ventilated aluminum backplate, and a three-slot aluminum heatsink. Additionally, thermal padding is placed on important VRM, memory, and other components in order to keep temperatures in check.

The exterior aesthetics of this model are quite simplistic, as it is devoid of any RGB displays. Its exterior is still stylistic, nonetheless.

A Dual BIOS switch is also included, and a 14+2 phase VRM solution allows the Speedster MERC319 to reach its full overclocking potential.