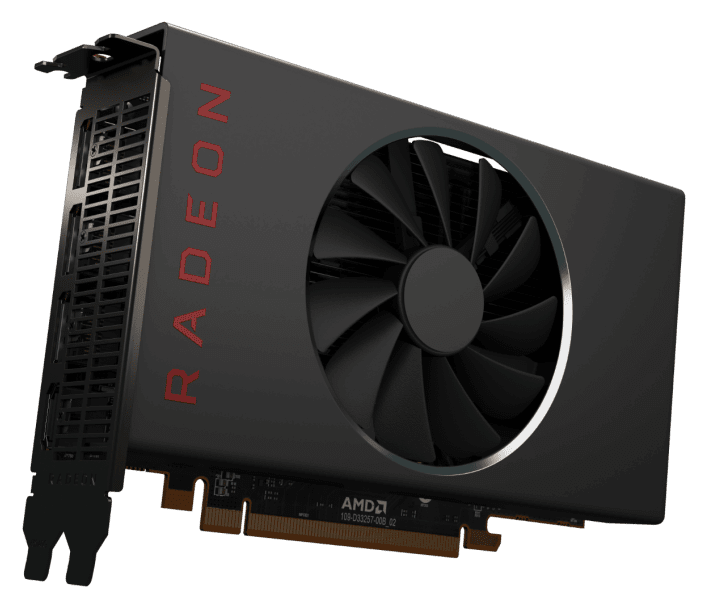 AMD is not done yet with their Navi releases, and this time they are pushing 7nm to ‘mainstream’ use with the announcement of the RX5500. This little brother to the RX5700 should compete directly with the GTX 16XX line, including the 1650/1660/1660 Ti (and the recently leaked 1660 Super) from Nvidia, and put AMD back in the fight for the entry-level gaming machine market. This card will target the market for relatively low-costing GPUs that are designed for users on a budget that may have been avoiding upgrading due to the high costs, as well as the OEM market for pre-built rigs.

So what do we know so far about the RX5500? With the official announcement made, information should become more and more available. Specifications are now confirmed, and we even have our first benchmarks, which we will go over in just a bit, meaning that the RX5500 should be out in the wild soon to allow for purchase/more benchmarks and to drill down on the details of the design. There are rumors of an eventual RX5500 XT or RX5600 card that would slot in-between the RX5500 and RX5700, but so far that is only a rumor.

To begin, the basic specifications fo the RX 5500 comparison to the RX5700:

Ok, so just looking at that table isn’t necessarily that exciting. The number of compute units is significantly decreased, and while the Boost Clock shows a nice improvement over the RX5700, the more realistic Game Clock is only about 50MHz higher. On top of that, the GDDR6 memory is decreased to only 4Gb, which does not compare well to the 6GB of the Nvidia 1660/1660Ti /1660 Super (although the 1660 uses GDDR5 memory). Based on these numbers, we would expect the RX5500 to fall somewhere around 50% slower than the RX5700, which benchmarks will need to confirm.

In fact, benchmarks are just starting to be released and show the RX5500 and none of them are exhaustive, so finding a reliable measurement is still difficult.  AMD’s own briefing showed an average 37% increase over the GTX1650, which would put it somewhere near the power of the GTX 1660. We have to keep in mind that any benchmarks from AMD itself are suspect and will want others to confirm, but depending on final pricing, this could be an interesting counter-offer in the entry-level market.

Another confirmed point about the RX5500 is that it will be exclusively a ‘parnter’ card. This means that there will be no reference model, so all cards will come from partner manufacturers.

As of right now, there is no firm information on stand alone partner cards. However, there has been confirmation from OEM manufacturers like HP, Lenovo, and MSI that the RX5500 and RX5500M (mobile version) will be available as soon as Q4 2019 in pre-built machines. In fact, MSI has already launched their first laptop with the card, the MSI Alpha 15.

The following manufacturers have registered RX5500 cards, but have not said which portion of their respective lines they will be a part of, so details are scarce:

For pricing, as you can imagine, we are still waiting for more information as there has been no confirmed pricing yet. And in general, there is still plenty of information to be expected as no specific partner cards have been confirmed yet. We expect there to be more offerings soon, with both dual/single fan designs, and will look to the major AMD manufacturers like Sapphire and XFX to see what they produce, as well as other mainstream producers like Gigabyte, ASRock, ASUS, and others.

In essence, the RX5500 is a direct play from AMD for the previously Nvidia-dominant, budget, hyper-efficient GPU category. It should compete favorably against Nvidia cards like the 1650 and 1660/1660 Ti/1660 Super, but pricing will be interesting to see how the two companies position themselves (especially since AMD has left plenty of room for an eventual RX5600 or RX5800 release). Check out our article on the GTX 1660 Super as well if you are looking for more information on that card when making your decision.

We will keep updating this as we get new information, but based on what we can see now, the RX5500 will be an interesting choice for users looking to play at 1080p 60+FPS (or 100+FPS for some optimized eSports titles) depending on the price of the partner cards (we expect somewhere between $200-$250)

However, if you are thinking of buying an RX5500 in the next couple weeks right on release, don’t! With both the new 1660 Super and RX5500 on the horizon, wait for the official releases and pricing to see if you can get yourself an extra performance boost without the extra cost.