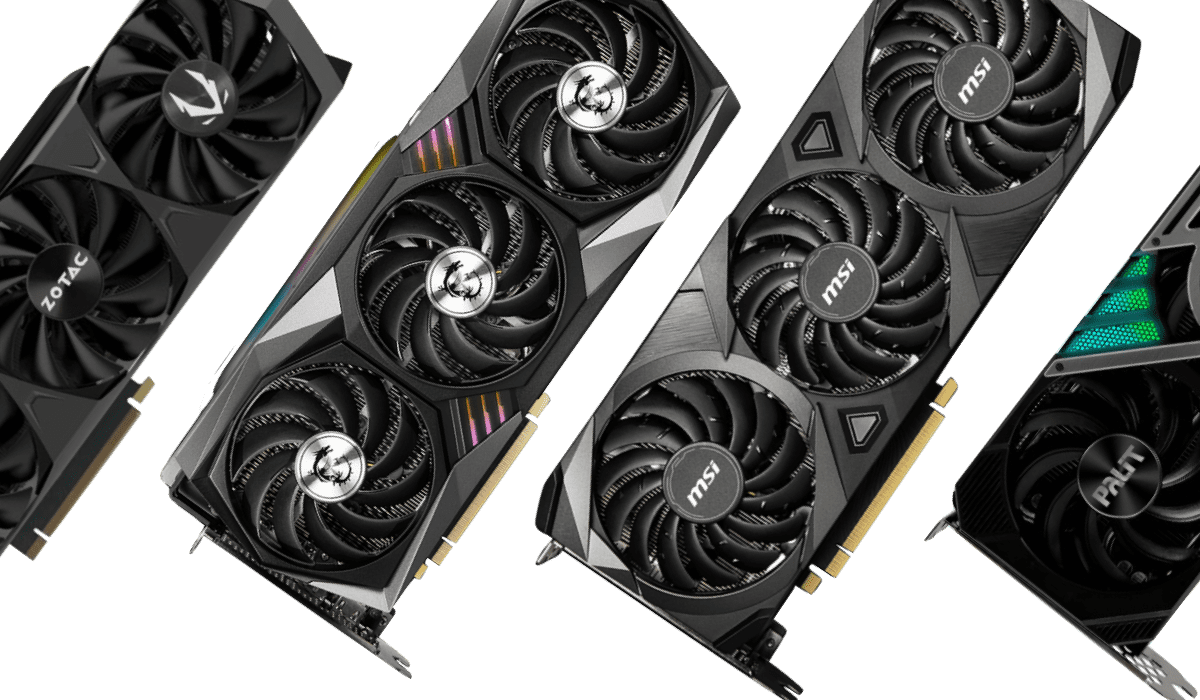 The Ampere GPU’s are finally available – sort of – and we’ve been able to gather information on the RTX 3080 partner cards that have shipped so far. In this article, we’ll recommend which of the various aftermarket RTX 3080 cards are best suited to you and your needs for 2021.

Some notes about RTX 3080 ‘partner cards’

There’s often some confusion about the range of cards available for any particular GPU so we’ll take this opportunity to explain how these various cards are created. Fundamentally there is only one type of ‘GPU’ here. Nvidia design the ‘GA102’ GPU core, the chip that actually does the graphics processing, and these are produced by Samsung. Some of these are manufactured into Nvidia’s own cards, the ‘Founders edition’ RTX 3080. The vast majority are sold off to partner companies such as MSI, EVGA, ASUS, Gigabyte and others. Those companies then go on to manufacture their own graphics cards using Nvidia’s core, but designing their own printed circuit boards and cooler solutions. GPU cores go through a process known as ‘binning’ whereby their performance is assessed and they are separated out into top performers, and lower quality items. With the GA102 cores being used in both the RTX 3090 and 3080, chips with some defective shader units can be ‘cut down’ to be used in the less powerful cards. Through this method, Nvidia maximise the saleable yield of GPU cores. The peak clock speed they can achieve leads to the differing ‘boost clock’ specifications you can see on manufacturers specifications, but rest assured that all Ampere GPu’s will significantly exceed these minimum guaranteed boost levels. By how much whilst remaining stable and cool is dictated by silicon quality. The actual ‘bins’ obtained by board partners for their various performance models is a closely guarded industry secret, so we’re left guessing as to whose cards may use the best silicon.

Nvidia also design a ‘reference’ board, the printed circuit board that holds the memory and power delivery circuity.  In the past these boards were sought after by enthusiasts because you could fit aftermarket cooling products like water blocks, and the components will be in the right place to make contact with the Voltage circuity and memory chips. This generation is somewhat different. Nvidia has branched out and created a unique cooling design with a partial PCB that allows air to blow through the back half of the card. The partner companies clearly haven’t had the time to conduct the R&D to mimic this cooler configuration or perhaps are prevented from doing so by patents, therefore the partner PCB’s are much more varied in design. This may create compatibility issues for those wishing to modify their cards with aftermarket cooling solution, but if you’re simply looking for a card to buy, install and use it won’t impact you. The manufacturers are also locked into Microns GDDR6X memory specification as that’s the only validated memory for the RTX 3080.

The upshot of this process is that all RTX 3080’s will perform in the same ballpark with perhaps 5% variance between models before overclocking. The factors that the partner manufacturers can control are the power delivery circuity and cooling capacity of the attached cooling solution, as well as overall size and build quality. The RTX 3080 is capable of drawing at least 320W and up to 350W in stock form making both power delivery and cooling critical to allowing these GPU’s to perform. That’s why we’ve seen a proliferation of huge 3-fan 3-slot thick coolers for this GPU. With that explained here are our recommendations for the best RTX 3080 cards.

ASUS’s  ‘TUF’ gaming brand marks its mid-range gaming components. This GPU sits close to the bottom of the pricing charts at around $780 but they haven’t scrimped on quality. This card has a solid 3 fan cooler design and utilises a neat independent heat sink for the memory chips – handy when they alone consume around 80W of the RTX 3080’s 320W power draw. The cooler utilises a central fan that spins counter to the other two to apparently reduce noise and reviews have found this card to be both quiet and cool in operation. The fan shroud and backplate are metal. Beyond that, the card maintains all of the RTX 3080’s standard specifications and has a 1740MHz boost clock. There’s also the slightly more expensive OC model with a higher boost clock although the performance of that card is limited by the strict power limit applied to these cards. The standard ASUS TUF Gaming RTX 3080 takes our recommendation due to the balance of low price, low noise, solid performance and good build quality.

The MSI Gaming Trio X is MSI’s higher-end entry into the RTX 3080 line up. It’s another 3 fan card and whilst the backplate is only 2 slots it’s a 3 slot thick card owing to the deep cooler. This card runs passively when not under load, turning the fans off completely for silent operation. The default fan curve runs quiet but does allow temperatures to creep slightly higher than in other models, but never to concerning levels. Since you can set a fan curve manually, this allows you the choice of low noise or low temperatures, or whatever balance of those two attributes suits you best. The low noise profile doesn’t dent performance, this is one of the highest performing cards right out of the box. It also ships with a GPU support bracket, a nice addition for such a large and heavy card and an accessory we’d like to see more GPU makers provide. There’s also prominent RGB lighting, although of course, you can opt to turn this off if you prefer a stealthier look. Overall we’re rating this as the quietest RTX 3080 with lower noise than even the founder’s edition model.

EVGA’s FTW3 line up has taken air cooling to the next level ever since the GTX 1080 Ti FTW3. This GPU utilises a thick 3 fan cooler but that’s nothing special amongst RTX 3080’s. What marks this card out is the lifted power limits, the single constraining factor on the RTX 3080’s performance. Almost all other cards sit tightly locked at 320-350W power draw owing to the chips’ huge power demands and limited voltage delivery circuitry. The FTW3 pushes that back to a huge 440W, 100W higher than the reference design. That’s power available for enthusiasts to play with, overclocking is the raison d’etre of this card and it has already been used to set overclocking records in 3Dmark. The 9-sensor ‘iCx’ monitoring array lets you keep a precise watch over temperatures and gives you independent control over the speed of each fan. You’ll need a rock-solid power supply to support this GPU: we’d recommend at least 850W gold rated. If you opt for EVGA’s FTW3 Ultra you’ll be blessed with one of the top-performing versions of the RTX 3080 anywhere.

One of the consistent features of partner RTX 3080’s is that they’ve all opted for huge cooling solutions. Given the need to dissipate at least 300 Watts of heat it’s clear that most manufacturers have been forced to opt for three fan triple slot thick coolers. Just the Founders edition card and this offering from EVGA buck the trend and offer true 2 slot thick options that are under 300mm in length. The EVGA XC3 is a smidge over 285mm long and protrudes past the 2 slot backplate by only a couple of millimetres. It still uses a 3 fan design but it’s narrow and doesn’t overhang to the side like almost every other version. Whilst we’d never call this card small it is the version of the RTX 3080 with the most compact dimensions whilst the 2.2 slot thickness means it will fit into many more small form factor case options such as the DAN A4 or NZXT H1. As ever if you’re planning a build with a powerful and large GPU in a small case it pays to double-check clearances and also look at Small Form Factor enthusiast sites to see what people have been able to fit in the case you’re considering.

Cards to avoid – for now: Zotac Trinity, Gigabyte Eagle, any other card with 6 POSCAPS and no MLCC array behind the GPU.

Unfortunately, there have been emerging reports of crashes and instabilities when certain versions of the RTX 3080 reach peak boost speeds. Due to some impressive detective work from Igors Lab, this has been linked back to the manufacturing decisions of some of the board partners. In brief, there are arrays of capacitors behind the GPU core that handle power delivery into the core itself, Nvidia’s reference design states that at least one of these six arrays should be a more expensive ‘MLCC’ capacitor array, not cheaper ‘POSCAP’s. In the founder’s edition, two of the arrays are MLCC’s. In the ASUS TUF, all six of these arrays are the more expensive MLCC design and Igor’s lab have not been able to produce this instability on either the Founders edition card or the ASUS TUF RTX 3080. Therefore until this issue is fully investigated and resolved we can only advise that you stay away from GPU’s that are known to use six POSCAPS to avoid potential instability problems if you overclock or in demanding titles. You should not be forced to underclock a brand new graphics card to achieve stability.