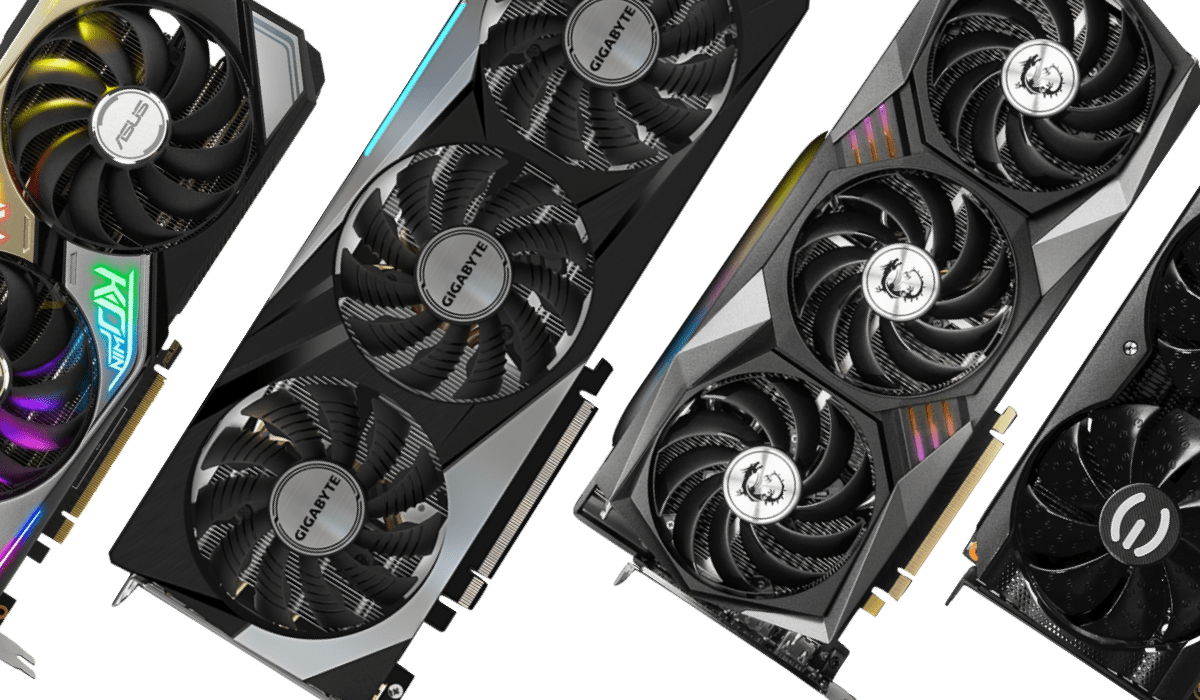 The RTX 3060 Ti has hit the market – sort of-  and provides performance equivalent to last generations RTX 2080 Super but at just $400. There are more than 30 variants of this GPU to choose between though, so we’ll take a look at the options and make some recommendations depending on your needs.

The first thing to note is that with the tight pricing range of Ampere GPUs, you shouldn’t spend too much on an RTX 3060 Ti. Whilst pricing can vary wildly, performance really doesn’t. You won’t see a huge performance uplift from a more comprehensive cooling solution or a bigger or more costly card. The 220W heat output of an RTX 3060 Ti isn’t particularly demanding, so these cards don’t thermally throttle even in a 2 fan design. They all utilise the same GPU core and specification of GDDR6 memory. It’s tempting to try and separate them by base or boost clock but that’s only an indication of the performance of the card. We’ve tested our example, a Zotac Twin Edge OC, which has a quoted boost clock of 1695 MHz. Without overclocking it happily reaches a boost clock of 1860Mhz – nearing the highest quoted boost clock of 1890MHz on the ASUS ROG Strix model. It is therefore an unreliable metric by which to gauge any cards performance.  As soon as you reach towards $500, you should really be looking at the lower priced RTX 3070’s instead: They will provide more performance for your money.

Asus RTX 3060 Ti TUF Gaming. Asus have redesigned their coolers for Ampere and the TUF gaming 3 fan cooler appears right across the range. Whilst it’s not identical owing to the different VRM and memory cooling requirements, this large heatsink uses 3 fans and heatpipes to dissipate the RTX 3060ti’s 220W output. The fin stack is nearly fills the 2.7 slot thickness of the card and occupies the bulk of the cards footprint.  The centre fan counter rotates which reduces turbulence and increases airflow with less noise. There’s also a fan stop so the fans don’t run at all until GPU temps reach 55C, and it mimics the Founder edition design by allowing air to pass through the open PCB and back plate at the end of the card. ASUS’s cooler design has been widely praised as one of the quietest and coolest running for the RTX 3080, so it will have absolutely no problems with the 120W lower heat output of the RTX 3060 Ti. The shroud is all aluminium which helps with heatsinking and gives the card a premium look and feel, and there’s even a BIOS switch to allow you to run in either a quiet mode with low fan speeds, or an OC/performance mode with more aggressive cooling. You can customise the RGB on the TUF Logo to help the card stand out, or blend in with the rest of your build. The Asus TUF RTX 3060 Ti is the model to seek out if you want the lowest noise and best thermal performance.

MSI have released a number of variants of the RTX 3060 Ti, but the Gaming X Trio is the one with the highest quoted boost clock at 1830MHz. Only the ASUS ROG STRIX claims a higher boost clock – and that’s at a price where an RTX 3070 will be cheaper and outperform it anyway. Whilst it’s not a direct indicator of the card’s performance it does show that MSI has confidence in the quality of the GPU core going into this card. The cooler is a 3 fan design using MSI’s TORX 4.0 fans to force air through the cooler as efficiently as possible and it’s nearly as quiet as ASUS’s TUF design. It is however a very large card measuring 323mm long, 140mm wide, and 56MM deep. Therefore if you have a smaller case we’ve got a second performance recommendation for you: The EVGA FTW3 Ultra Gaming.

This GPU from EVGA is just 285MM long and 2 slots thick but still has a boost clock quoted at 1800MHz. It uses the more compact EVGA iCX3 cooler as found on the RTX 3070 and 3080, which has copper plates and heat pipes to maximise heat transfer away from the GPU core. We’ve found it a capable and quiet cooler on those cards so it will have no problem coping with the 100W smaller heat loading of the RTX 3060 Ti. The fans use ‘fan stop’ when the GPU isn’t under strenuous load, extending their life and lowering noise. This is still a high-performance variant of the card but doesn’t opt for an oversized cooler like many other partner models have done.

Looks are a subjective thing and you’ll likely have your own opinions here, but there’s no doubt that Nvidia have upped their game with the aesthetics and cooler performance of their Founders Edition GPUs since the Turing Launch. Gone are the low-cost high-noise blower coolers of old, and the Ampere launch saw not only stunning looking cards, but also a revolutionary cooler design. The RTX 3060 Ti uses this same format, with the rear fan blowing air out through the IO plate, and the ‘front’ fan blowing air through the open cooler design to push it through the cooler as quickly and quietly as possible. This lends the RTX 3060 Ti a clean, modern aesthetic with brushed aluminium and black cooler fins. Only the 12 pin bespoke power socket, and the need for a separate dongle to take power to the gpu – interrupts the clean lines of this GPU. It’s also compact, making it a versatile choice and well suited to a more elegant build or perhaps small form factor cases. Its rumoured Nvidia are making a loss with the pricing of the founders edition cards combined with the high quality cooler solution, in a bid to keep partner cards pricing low. These cards are therefore excellent value at $399 as well. The main problem with the Founders Edition is finding one. If you can obtain a founders edition card at $399, then it’s an excellent value and performance option amongst the range of RTX 3060 Ti’s out there.

The RTX 3060 Ti’s combination of relatively low power requirements, excellent performance, and the availability of smaller models make it an ideal GPU for small form factor builds. Several manufacturers have smaller twin fan models, but they often exceed 2 slot thickness and that’s an absolute requirement for many SFF builds. Short length is also a bonus as they can be fitted in more configurations, or perhaps allow you to retain mount points for SSD’s or a small radiator and the XC Gaming is just 202mm long.  EVGA’s RTX 3060 Ti XC Gaming is one of the most compact models but at $409 MSRP it’s also affordable. It remains a pure 2 slot card and the cooler does not protrude beyond the PCIe bracket. There’s an all metal backplate to help stabilise the card and also for looks. It still has the full complement of 3 DisplayPort and one HDMI output. This RTX 3060 Ti AIB card is an excellent choice for the compact power it offers and the versatility of installation options the small size affords.

The Best RTX 3060Ti is the one you can actually buy:

Should you buy a card from a less well-known manufacturer? With supply being so limited you may find that some other brands come onto your radar, so should you consider them? Whilst it’s nice to hold out for the perfect card, it’s also nice just to get on with enjoying your PC and gaming on an RTX 3060 Ti. So do you lose out by opting for one of the less well-known brands?

Whilst they don’t have the prominence or marketing budget of MSI, Asus or EVGA; brands like Zotac, Palit, PNY, and KFA have been in the game just as long. They all manufacture cards to the specifications set by Nvidia so the quality and performance of the cards are high. PNY for example has been the sole manufacturer of the Nvidia ‘Quadro’ cards for workstation use for years, so they have a good deal of experience in designing and manufacturing GPUs. The offerings from Palit and Zotac may not be as pretty as some others, but they are perfectly functional.

We obtained a Zotac Twin Edge OC for testing purposes and have been impressed with its build quality and performance. It is a little louder than we would like, but still uses fan stop technology at idle, and temperatures are good despite being a two-slot card. Ultimately, it performs exactly as an RTX 3060 Ti should which is the most important thing. If your PC is focused on price-to-performance, or a workhorse not a show pony, then there is good value to be found in considering these other manufacturers. Above all, it may be that you can buy an RTX 3060 Ti at near RRP, and much sooner than if you hold out for the most desirable models.

I hope you’ve found that the round-up of the RTX 3060 Ti variants useful. Here’s hoping that 2021 sees an end to the drastic component supply problems so that we can all get on with enjoying our PCs rather than hunting for the stock of these desirable, high-performance GPUs.