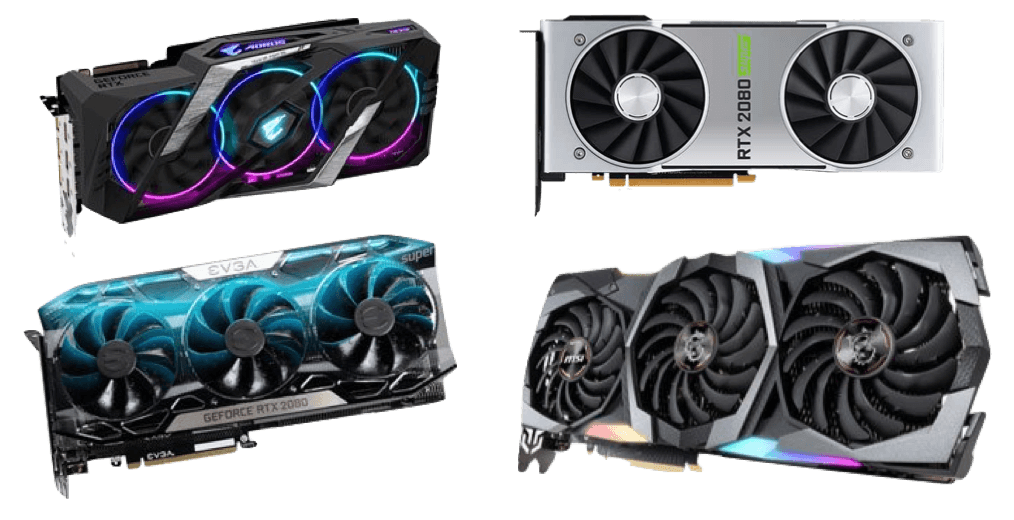 With the RTX 2060 Super and RTX 2070 Super already released, the last of Nvidia’s ‘Super’ series of graphics cards to be released is the upcoming RTX 2080 Super, set to be released at the end of July. This refreshed Turing GPU card improves on its predecessor, the RTX 2080, with a marginal performance increase whilst retaining the $699 retail price point.

NVIDIA’s Turing architecture was a huge hit, with the RTX graphics cards bringing a significant performance boost to the table compared to their predecessors, and leaving AMD in the dust. However, AMD wasn’t going to go down without a fight, so when they kept teasing the Navi architecture, NVIDIA had to act. This is how the SUPER series was born.

The NVIDIA RTX SUPER family is basically the regular RTX on steroids – you have the RTX 2060 SUPER, the RTX 2070 SUPER and, the jewel in the crown, the RTX 2080 SUPER, each bringing some improvements over their non-SUPER counterparts, and, most importantly, coming with a lower price.

The SUPER family is still based on the Turing architecture, so the differences are not major, but that was never NVIDIA’s plan. SUPER cards are not meant to be upgrade options for RTX owners, but rather act as decision-makers for those that were on the fence for getting an NVIDIA card – you get more performance than the regular RTX, at a lower cost: win-win.

The RTX 2080 Super will be released as a founders edition, retailing at $699, as well as aftermarket / AIB / custom RTX 2080 Super cards with a custom PCB, released from manufacturers such as MSI, ASUS, EVGA, Gigabyte, Palit & Zotac.

Opting for an aftermarket RTX 2080 Super card presents a number of benefits compared to picking the Nvidia GeForce RTX 2080 Super Founders Edition – with the main differences listed below:

In this guide, we will show you all currently announced RTX 2080 Super aftermarket cards, and put them in a comparison chart to begin to compare specifications and begin to get an idea of which are the best RTX 2080 Super cards on offer.

Right now, not all the specifications are released for all RTX 2080 Super aftermarket cards, but we will update this chart to include them as soon as they become announced, along with prices and VRM info.

So, now that you made your mind, and are ready to get a SUPER card, it’s time to evaluate the options. Below are all currently announced RTX 2080 Super cards, then we will award the best NVIDIA RTX 2080 SUPER cards out there (so far).

This RTX 2080 Super comparison chart is best viewed in full-screen mode due to the number of columns – horizontal scrolling is also enabled.

Cheap doesn’t necessarily mean bad, though, as demonstrated by EVGA – the RTX 2080 SUPER BLACK GAMING is just as powerful as any other stock RTX 2080 SUPER out there, and since 2080 SUPER cards come with 3072 CUDA cores and a base core clock of 1650 MHz, you can expect quite some impressive performance from it.

The EVGA RTX 2080 SUPER BLACK GAMING might be on par with the crowd in the performance department, but the price cuts become visible once you start looking at the card closer. For starters, the card’s OC capabilities are basically non-existent, considering the fact that it comes with a 8+6 pin power configuration, when most other cards out there come with an 8+8 pin configuration. Cooling is not something the card can brag about either, its two-fan design not being the most effective nor the silent one out there. As for RGB lighting, things are simple: there is none.

Overall, if you’re only interested in raw performance and saving money, the EVGA GeForce RTX 2080 SUPER BLACK GAMING is the way to go.

Looking for the best mix of performance and features? ASUS has your back, with the ROG Strix RTX 2080 SUPER OC edition. This behemoth of a video card has ASUS ROG’s mark all over it, from its massive design (the card is nearly 3 slots wide), to the three vents, its sturdy backplate, and the Aura Sync RGB lighting.

Aesthetics aside, the card’s ROG DNA becomes even more obvious when you look at its specs – the ROG 2080 SUPER OC comes with factory overclocking, boasting some pretty impressive figures: 1650 MHz base core clock with 1860 MHz Boost, in default mode, and a whopping 1680 MHz base with 1890 MHz Boost in OC Mode. And if that’s still not enough to feed your need of power, you can simply overclock it further – ASUS’ ROG cards are renowned for being able to hit some pretty impressive figures without taking a sweat.

What really makes the ROG Strix RTX 2080 SUPER OC a best buy is the fact that it ticks all the right boxes, starting from its superior performance, all the way down to the little extras such as the FanConnect II headers, which allow you to connect your case fans to the GPU and control them directly from its software, thus making them kick off only when things get serious.

Overall, the ASUS ROG Strix RTX 2080 SUPER OC is the card you’re looking for if you want exceptional performance, and everything-premium.

Let’s get one thing straight: the RTX 2080 SUPER is fast. But, if you want SUPER-fast, you want the ZOTAC RTX 2080 SUPER AMP Extreme. This three-slot beast is imposing in each and every way, from its massive design, all the way to its stunning performance, and, most notably, for its monstrous overclocking capabilities.

ZOTAC did an amazing job with the RTX 2080 AMP Extreme: 1875 MHz Boost clock out-of-the-box is quite impressive. And, the closer you look, the more impressive it gets. ZOTAC has a history for adopting overkill solutions in the past, and now they’re at it again – the 2080 SUPER AMP Extreme comes with a 16+4 VRM configuration (double the figures of the reference design, and more than what a lot of RTX 2080 Ti cards pack), which translates to colossal overclocking abilities. Another important part in the overclocking process is played by the cooling, and ZOTAC nailed this as well by integrating two fan controllers for the card’s triple-fan design. This means that two fans can be set at a certain speed, while the third can be set at a different one, thus allowing for more efficient cooling and various airflow pressure configurations. The end result is better cooling, but it does come at a price – the card is slightly louder than other 2080 SUPER cards.

Overall, if you want to squeeze even the last drop of performance out of the RTX 2080 SUPER, the ZOTAC GAMING GeForce RTX 2080 SUPER AMP Extreme is the card that will allow you to do so.

Looking for that RTX 2080 SUPER that will stand out of the crowd in more than one way? You found it: the Gigabyte AORUS RTX 2080 SUPER WATERFORCE. If you were to describe this card using one word only, that word should be “quiet”, with “amazing” being a very close second.

In case its name wasn’t a giveaway already, the Gigabyte AORUS RTX 2080 SUPER WATERFORCE is distinct in one main way – it is water-cooled. This translates to excellent heat-dissipation capabilities, thanks to its hefty 240mm radiator that comes with two 120mm RGB fans. Not only does this setup provide the card with excellent cooling with minimum noise, but it also allows for the mounting of two additional 120mm fans for a push-pull configuration that opens the path to some serious overclocking. Most people won’t need overclocking, though, given the fact that the card comes with a Core clock of 1860 MHz out of the box, but it’s always good to have some headroom and be future-proof.

Cooling is not the only segment where the Gigabyte AORUS WATERFORCE overdelivers – the card comes with no less than 7 video outputs: 3x DisplayPort 1.4 ports, 3x HDMI ports, and one USB Type-C. Also present is some serious RGB illumination, on the card itself as well on the two fans, so this card is sure to deliver one hell of a view.

Overall, if you’re looking for a card that delivers outstanding performance without sounding like a jet taking-off, and you have a ginormous case that can fit it, the Gigabyte AORUS GeForce RTX 2080 SUPER WATERFORCE is definitely worth your attention.

We’ve seen the cheapest, most powerful, most overclockable, and most quiet – now it’s time to see which RTX 2080 SUPER brings together the best of all worlds. Meet the MSI RTX 2080 SUPER GAMING X TRIO.

MSI did an excellent job with the X TRIO, starting from the boosted frequencies (the card comes with 1845 MHz core clock), to its excellent cooling (featuring the renowned TRI-FROZR design), to its RGB lights featuring the Mystic Light Sync feature – MSI ticked all the right boxes with this card.

Performance-wise, the RTX 2080 SUPER X TRIO is slightly above the competition in pretty much all tests, and even though the differences are small, the card’s advantage can be increased by overclocking it, as its PCB design, power delivery (8+8 pins), and cooling, allow for a pretty decent boost. In the aesthetics department, the card stands out too due to its massive design, large fans, dark color scheme and subtle RGB lights.