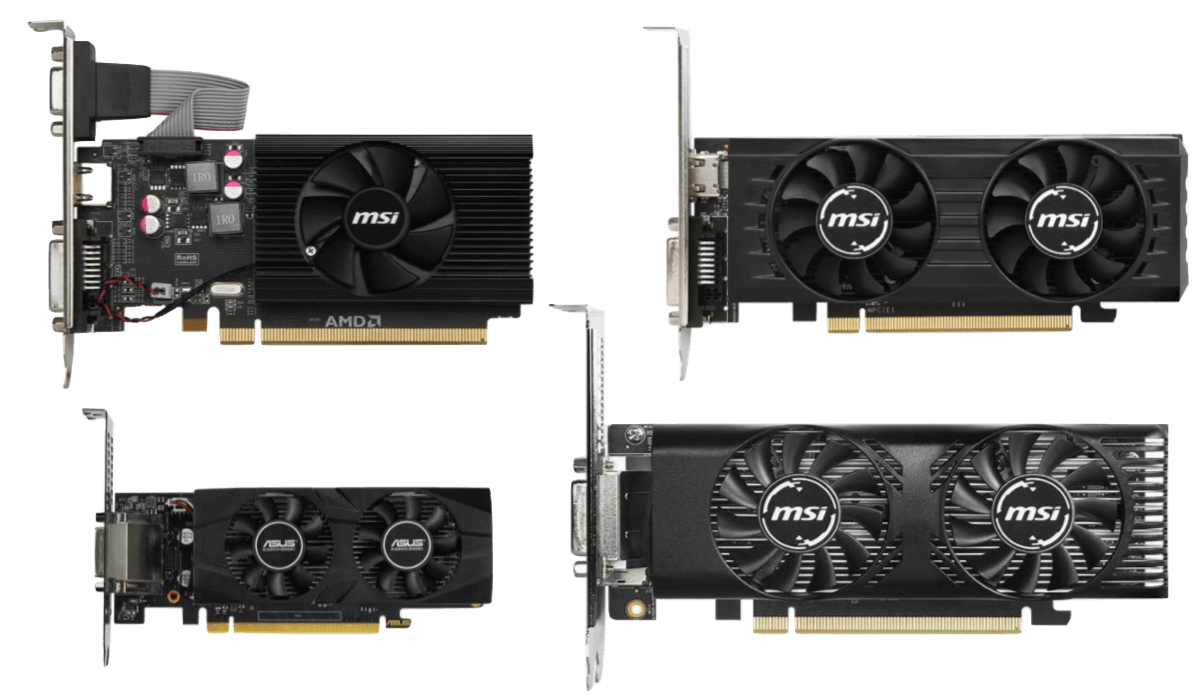 SFF (small form factor) and HT (home theater) PCs are becoming more and more popular, and rightfully so. As technological improvements to hardware are constantly scaling down in physical size, one can have a powerful computer at only a fraction of a normal desktop’s size. Either you want it for a work desk with multiple monitors, are constantly moving and want a semi-portable desktop, or just enjoy less clutter, the SFF PCs offer several benefits compared to normal size computers. Low-profile GPUs also have some benefits in comparison to their larger counterparts, as they are less power consuming, far less noisy, and come at a decent price. In this article, we are going to list some of the best low-profile GPUs for 2021 you can get, depending on your budget and your intended use of the PC.

If you’re looking to make a minimalist build, this is the best card you can find for the price. In comparison to Nvidia’s GT 710 LP – which costs just about the same – the AMD Radeon R7 240 fairs far better in terms of benchmarks. It has up to 67% higher effective speeds, and can even play some competitive online games, like Counter Strike: Global Offensive at the near 60 fps mark at 1080p.

Of course, this GPU is not intended as much for gaming, as it is for low PC-intensive work, web browsing, and video streaming, where it can handle 1080p videos without stuttering or overheating. It has 2GB of GDDR3 V-RAM, a 64-bit memory interface, a 600MHz memory speed, an HDMI, DL-DVI-D, and VGA D-SUB outputs, and only requires a 300W PSU. It’s best feature? The $55 price range that you can currently find this at.

The MSI RX 550 4GB OC has a dual-fan, aluminum core design for lower temperatures and higher stability and efficiency. It can be overclocked for a boost clock of 1203 MHz and it comes with 4GB of GDDR5 V-RAM, a memory bus width of 320 bits, and HDMI 2.0b and DL-DVI-D ports. Considering you can currently find the MSI Radeon RX550 for approximately $111, it is the best price-value choice for a dedicated HTPC.

In terms of software, it comes with the GPU Tweak II, which allows you to manipulate parameters such as core GPU core clocks, memory frequency, voltage settings and fan controls. This card can play most online competitive games with a 1080p resolution, and some at over 60 frames per second. For a low-profile GPU, it is quite a feat to be able to play these low-intensive AAA games, therefore justifying ASUS GeForce GTX 1650’s – somewhat higher – price-rate; which currently ranges at around the $205 mark.

Taking everything in to consideration: price, the ability to watch and stream 4K resolution videos, the ability to create a workstation that can handle more demanding programs, and also have the chance to game every once in a while, this card has the best overall value. If you’re looking to upgrade your SFF computer’s graphics card, the MSI GTX 1650 Gaming LP is the perfect choice to do so. It has a boost memory speed of 1665 MHz, 4GB of GDDR5 V-RAM, the standard 896 CUDA cores, two 40mm fans, and 8 Gbps memory speeds.

What’s great about MSI’s model of the GTX 1650 is the OC Scanner. This software automatically finds the highest stable overclock settings for your card, so it boosts the speed of the graphics card without you having to worry about overheating, or having to go through the settings to enable, or tweak, the overclock settings. If you do want to manually change the settings, MSI’s afterburner software allows you to monitor and tweak your system’s metrics in real-time. As with the ASUS GeForce GTX 1650, MSI’s model also has Nvidia’s proprietary G-Sync technology, which aims to eliminate screen-tearing and FPS-drops. It does also have built-in video streaming and recording software.

In terms of ports, it comes with 1 HDMI 2.0b and 1 DL-DVI-D output. Buyer beware: it does not come with a display port. For its current $160 price tag, the MSI GeForce GTX 1650 LP is the best low-profile graphics card available in the market.