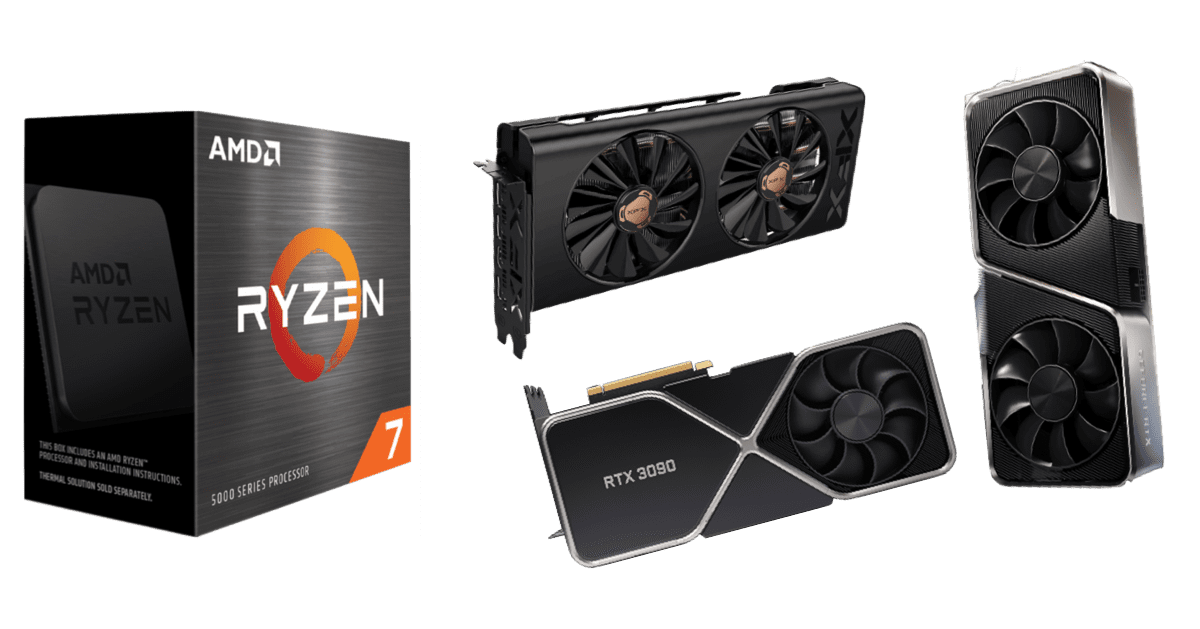 In anticipation of the November release of AMD’s Zen 3 Ryzen 5000 series CPUs we’re going to look at some of the best GPU options for your next gaming build.

The Ryzen 7 5800X appears slated to compete with Intel’s Core i9-10900K directly, and at $450, for a steep discount! Zen 3 is AMD’s statement to the world that they’re no longer just the cheaper Intel alternative; they’re confident enough in the quality and performance of Ryzen to add $50 to the price of every Zen 3 CPU. While we’ll still need to see just how confident AMD deserves to be with their next-generation processors and graphics cards, they’ve earned some bragging rights over the past couple of years due to the intense competition they’ve brought to both markets. From the looks of Zen 3, they don’t seem to be slowing down anytime soon.

Now, even at $450, you can get away with choosing the 5800X in a mid-range system while still having plenty of budget left over for your GPU. So if you’ve decided the new Ryzen 7 is right for you, we’re here to help you make that second choice today by recommending some of the best GPUs to pair with the Ryzen 7 5800X.

The XFX RX 5600XT THICC II Pro 6GB is, ironically, a phenomenal way to slim down the budget for your next build without sacrificing much in the way of FPS performance… At 1080p. If you’re planning on gaming at 1440p or higher, you might consider something significantly more powerful. The last GPU generation was rife with cards, from the Nvidia GTX 1660 to the RX 5700, that performed exceptionally well at 1080p but hit a major wall in many titles at 1440p.

Genius marketing aside, this thicc boi manages stellar 1080p performance at max settings in all but the most demanding (or poorly optimized) AAA titles, all while staying cool and quiet under load. For an even $300, the RX 5600XT THICC II comes with 6GB of GDDR6 VRAM at 14Gb/s, boost clock speeds up to 1620MHz by default, overclocking capabilities, an adequate cooling solution with dual-fans, and overclocking support that, admittedly, leaves a bit to be desired. However, this is through no fault of XFX’s, as most 5600XTs don’t have terribly much headroom to play with and can sometimes be tricky to get stable. Regardless, until AMD reveals more information regarding their upcoming “Big Navi” Radeon cards, there aren’t many choices at or below $300 that are worth your while, especially from last generation.

Hands down, the best choice is going to be (unless Big Navi really has some surprises in store), the Nvidia GeForce RTX 3070 8GB Founder’s Edition. Despite having less VRAM, the $500 RTX 3070 goes head to head with last generation’s crown champion, the RTX 2080 Ti, for less than half the price! For the vast majority of builders, the level of performance offered by the 2080 Ti was straight up unattainable, or at the very least, a ridiculous prospect for $1200 minimum. Now Nvidia has come to their senses, or they’ve managed to improve their manufacturing process enough, to bring costs way down. $500 certainly isn’t a drop in the bucket, but it’s infinitely easier for most people to stomach the price compared to what could be a monthly mortgage payment!

Based on what we’ve seen so far, the RTX 3070 should be greater or equal to the 2080 Ti in almost every way except for the price. For $500, the RTX 3070 sports 8GB of GDDR6 VRAM, boost clock speeds up to 1730MHz, overclocking support, and their wild new “flow-through” cooling solution that should easily keep thermal and noise levels in check. You’ll also be able to take advantage of your 5800X’s PCIe 4.0 support! Again, we still have to see what AMD’s got behind the curtain with the new Radeon cards later this year, but there’s very little chance that whatever they have will invalidate the 3070 as a top-tier pick for the vast majority of PC gamers.

Again, we’re still going to have to await the release of AMD’s new Radeon cards to determine the real heavyweight champion, but right now, it’s the Nvidia GeForce RTX 3090 24GB. Nvidia has developed an absolute monster of a GPU accompanied by an equally monstrous $1500 price tag. Most gamers, including the team at PremiumBuilds, are always rooting for Team Red to bring the heat and to continue generating fierce competition; but, it’s going to be exceptionally difficult to top this beast.

Suppose you’ve got a burning desire for ludicrous FPS performance at unreasonable resolutions and money literally burning a hole in your pocket. In that case, you cannot go wrong with the RTX 3090. That whopping $1500 nets you 24GB of GDDR6 VRAM, over ten thousand CUDA cores, boost clocks up to 1700MHz by default, overclocking support, beefy cooling solutions no matter which manufacturer you choose, and guaranteed buttery-smooth 4K FPS performance. Just make sure you account for the 350W TDP and select a top-notch PSU.

Now, our pick for the best overall GPU for 5800X builds is… To be determined 😊. Unfortunately, we’re still in a bit of a pickle at this stage. We’re just coming out of a graphics card generation with some of the most difficult decisions we’ve seen in years, thanks to crowded product stacks with features, prices,  and performance being nearly identical for so many options. Even still, there was a complicated list of pros and cons to consider between teams Red and Green! Further, we’ve still yet to completely enter the next generation of graphics hardware as we await the release of cards like the RTX 3070 (due on October 29th) and AMD’s entire RDNA2 Radeon lineup (due October 28th). Rest assured, if you’re not big on having the “latest and greatest” hardware, or if you’re content to take what’s currently available, our picks today will satisfy even the pickiest builder and pair perfectly with your shiny new 5800X!

It’s exciting times in the world of consumer desktop hardware, and things will only get more interesting from here on out. We’re all desperately waiting to get our hands on the “next big things” from just about every company out there… Except Intel 😊. Jokes aside, we should all take a moment to give thanks to AMD’s diligent employees for doing everything in their power to innovate and challenge what’s possible for consumer-grade hardware. It’s genuinely incredible how exciting real competition can be for customers, and when companies are forced to provide you the best quality for the best value, everybody wins!