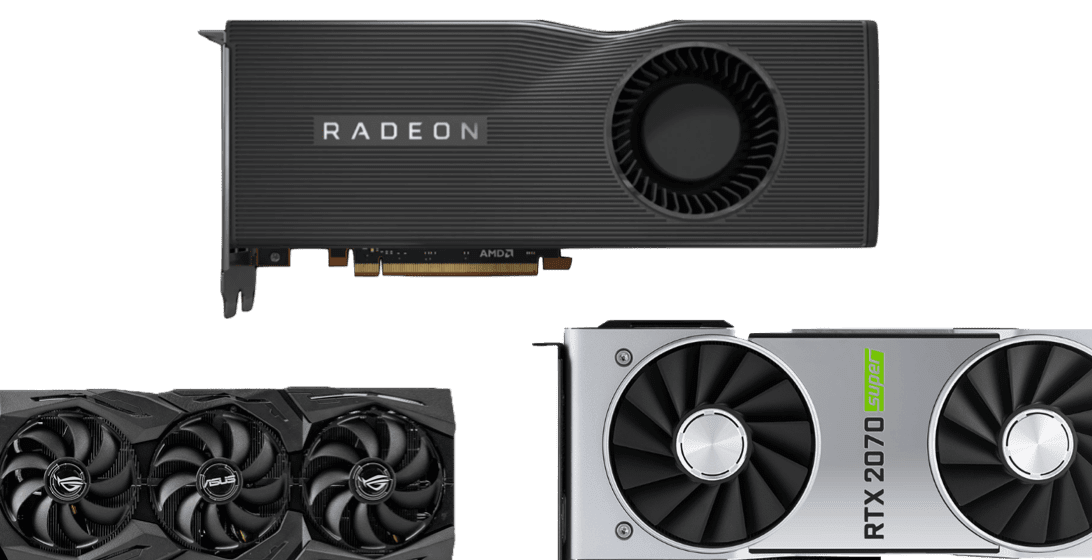 We are starting to see builders post, show and review their Ryzen 3000 builds, and these builds are starting to give us some idea on what the best performing components are to pair with the Ryzen 7 3700x and 3800X – such as picking the appropriate motherboard, CPU cooler or the right graphics card to ensure no bottlenecking of the Zen 2 system.

The newly released AMD Radeon RX 5700 XT is aimed to rival the also newly-announced RTX Super series, specifically the RTX 2070 Super and above. AMD hasn’t always been on a level with Nvidia in terms of their graphics card performance, but we think this may have now changed with the introduction of their Navi range of graphics cards.

The Navi 5700 XT is built on a new 7-phase design, 7nm process an RDNA architecture, claimed to produce 25% more performance per clock than its brother, the RX Vega 64 – whilst having less bandwidth and fewer compute units. This powerful card is cooled with a chunky blower style cooler, but we have yet to see aftermarket 5700 XT cards cooling styles – which we imagine can improve on the cooling further and thus performance.

Connectivity wise, the Navi 5700 XT features 3 DisplayPort connectors and one HDMI 2.0 connector and lacks a USB Type C connector as seen in the new RTX Super series graphics cards, as well as VirtualLink – which is a technology we are a big fan of.

If you’re looking to build a Ryzen 3700X PC and want a great performance graphics card to pair with this Zen 2 processor, offering fantastic value for its specs – them we recommend the Navi 5700 XT for the Ryzen 7 3700X and 3800X.

It would be great if AMD were to bundle the 5700XT with the Ryzen 7 3700X, and offered some sort of combo discount – that way many builders would likely build with this graphics card instead of Nvidia.

The new RTX Super series of graphics cards by Nvidia is an update on their Pascal based RTX cards, and are welcomed by many PC builders with a decent improvement on performance. This new generation of Nvidia graphics cards now offer even better value for money than the previous generation, and making the RTX Super graphics cards good options for future Ryzen Zen 2 builds.

The new RTX 2070 Super is a great graphics card to pair with the Ryzen 3700X or 3800X, for those looking to game at 1440p or even 4K – with this graphics card claimed to perform 2% faster than the GTX 1080 Ti in real-world applications – meaning that this graphics card retailing at $499 offers enthusiast-grade performance even for those on a budget.

If money is of no object, then we recommend pairing the Ryzen 7 3700X with the RTX 2080 Ti – which will create a monstrous 3700X build that will be capable of pushing out some serious benchmark scores and high framerates. Right now, the RTX 2080 Ti is the absolute best consumer-grade graphics card on the market right now, and if you have the money to afford a Ryzen 7 3700X + RTX 2080 Ti build, then we say go for it.

In terms of which RTX 2080 Ti card to go for, there are plenty of aftermarket cards to pick from, although due to availability and demand they all command quite the premium over the retail price. We have a standalone guide to the best RTX 2080 Ti aftermarket cards here, but right now in 2019 our favorite RTX 2080 Ti is the ASUS ROG Strix edition.

The reason this is our pick is due to its fantastic and efficient power delivery, mammoth triple fan cooling setup, and extremely high stock base and boost clocks – with room to overclock further. If you can get your hands on the ASUS RTX 2080 Ti Strix, then get this card for your Ryzen 7 3700X build.