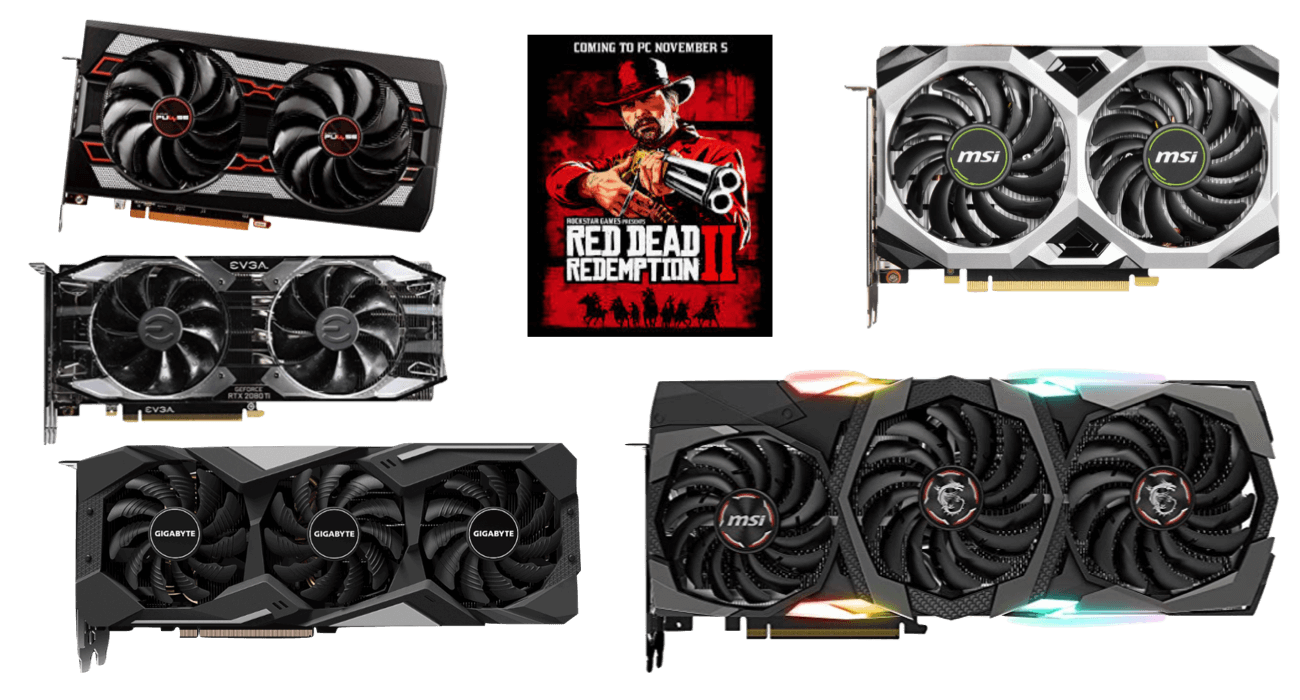 Rockstars latest AAA title was released on PC this week, promising stunning visuals with a raft of enhancements over the year-old console versions. The latest big-budget titles have always been a stern test of gaming hardware and Red Dead 2 is no exception – if you want to experience it in all its glory you’ll need the graphics card to meet the challenge head on. In this article I’ll look at the performance of the various options and make some recommendations that will meet your needs and budget.

The demands of Red Dead Redemption 2 on PC:

Rockstar Games recommended system settings initially raised hopes with the relatively inexpensive and highly popular GTX 1060 6Gb and Radeon RX 480 4Gb mentioned, but benchmarking the game clearly demonstrates that it will eat as much GPU as you feed it and owners of older GPU’s may feel disappointed with the performance they can achieve. Nvidia make much higher recommendations starting with the RTX 2060 Super for 1080p – perhaps unsurprising since they’re in the business of selling video cards and they only make money if you’re buying their latest and greatest products. The PC specific graphical enhancements like increased draw distance and texture resolution only come into play with a more powerful GPU and higher settings, and of course, a much higher frame rate cap (150fps) can make use of any spare GPU cycles for a smoother experience. So if you’re looking to build a PC now and want RDR2 to wow you, it is worth careful consideration of how much budget you’re putting into the GPU. We’d always suggest biasing a gaming build towards GPU grunt, but Red Dead doubles down on that.

Benchmarking Red Dead Redemption 2 to get a handle on what makes it tick is tricky – Rockstar opted not to include standardised ‘medium/high/ultra’ quality defaults meaning you have to set each and every parameter manually to achieve consistent results even using the inbuilt benchmark. With some settings like ‘ultra’ water physics costing up to 10% of frame rate alone, it’s clear that you need to thoroughly understand the testing methodology of any review site you’re looking at before treating the results as gospel. The flip side of this is that there’s plenty of latitude to optimise the game to your system by altering a few of the most costly but least rewarding settings. The built in quality slider can be set to ‘performance, balanced or quality’ so if you don’t want to trawl through each and every half understood graphical setting there’s a crutch there to help you quickly balance the game to your preferences and hardware.

That said, this is PremiumBuilds, and we’re going to recommend the cards the get you the most out of the game even if that does come at a (slight) additional cost to your bank balance. Our standards are: The game should play smoothly (60+fps) and look gorgeous (mostly high settings) on any card we’ve recommended in this article.

Reliable benchmarks do show some surprising performance gaps emerging. The long lived high end king, the GTX 1080 Ti appears to perform below par yielding performance similar to the RTX2060 Super for the most part. Whilst it is early days, this could be the sign that the Pascal generation GPU’s are finally getting left behind – or it could just be that driver optimisations have not yet been applied to these GPUs with day zero efforts focussing on owners of the newer generation cards. For the most part, Vulkan API’s appear to match or better DX12 irrespective of whether you have an AMD or Nvidia GPU, but Vulkan has traditionally paired well with AMD and we see some remarkably strong performance showings for the new 5700 and 5700XT GPU’s. If the RX 5500 is able to match this performance uplift, it could become the Go-To Entry level 1080p card for RDR2 but we’ll have to wait for its release to really assess it properly.

Best GPUs for RDR2 – My Recommendations

At 1080p, Nvidia themselves recommend an RTX 2060 Super – and with 60fps minimums and high 80’s FPS average on high settings that’s a sound call. But there’s a problem for Nvidia: The AMD Radeon RX5700 matches the performance of the RTX 2060 Super almost exactly, but bests it on price by nearly $50/£50. A high-quality version of the card – The Sapphire Pulse retails at £345 and provides excellent 1080p performance even with the settings in full on eye-candy mode. Expect 60+fps at a minimum and averages touching on 90fps. This version of the GPU has 8Gb VRAM, Twin fans and good power efficiency along with nice features such as a dual bios switch for overclocking and a metal backplate it’s an easy recommendation.

It’s not a one-trick pony either – this GPU happily keeps pace with the more expensive Nvidia rival across a gamut of games. The only circumstances that would cause us to recommend an RTX 2060 Super card in its place are if you intend to stream using NVENC, or else have some other compelling need for the RTX cores (and RDR2 lacks hardware ray tracing support, so it’s not that as a reason!).

If you’re looking to build a great value 1080p gameing machine and can’t stretch to £350 for a GPU, Nvidias newly released 1660 super is your go-to card for Red Dead Redemption. Whilst it can’t match the performance of GPU’s a tier higher, it can certainly play the game very well indeed and without a wallet worrying price tag. Zotac and MSI both have fantastic value offerings at just £220/$220 and our pick goes to the MSI Ventus OC due to its good monitor connectivity options (3xDisplayport and 1xHDMI), Backplate and zero fan mode for silent non-gaming operation. Even with high settings this GPU will exceed 60fps average, and doesn’t drop lower than 40 fps even in demanding scenes.

AMD continues its dominant showing in this game with the RX 5700XT giving a sterling performance at 1440p resolution, high settings. Benchmarks show it producing mid 70’s FPS average and never dropping below 40  fps lows. That’s mirroring the performance of the Nvidia RTX 2070 Super for a Full £100/$100 less making the RX 5700XT the clear entry point for 1440p gaming in Red Dead Redemption 2. The Gigabyte Card performs on a par with any other Radeon RX 5700Xt – which is to say very well, but Gigabyte appear to have succeeded where a number of other manufacturers have failed with the 5700XT – that is keeping the GPU die and VRAM acceptably cool. That translates into better performance with higher boost (silicon quality permitting, you can’t escape that dice roll) and quieter running. The triple-fan cooler design and well engineered heat sinking, along with a functional backplate make this GPU a cool, quiet card that we have no hesitation in recommending. It performs admirably in Red Dead Redemption 2, especially considering the sticker price of under £400.

To be clear – no card will ‘max out’ Red Dead 2. Ultra settings across the board are of such brutality that they’ll choke the most powerful GPU’s available at 4k and 1440p. But if you want to push sliders higher and frame rates towards 100fps then we move into the realms of the RTX 2080 Super. Nvidia still have a monopoly on the high end GPU market, and the RTX 2080 super offers considerably less value in terms of frames per buck spent. Benchmarks show this second highest GPU on the podium averaging 90fps on high settings, with only very occasional blips down to below 60fps in demanding scenes. This translates to buttery smooth and visually stunning gameplay, and if you’ve got a G-sync monitor you may well want to look to an RTX 2080 super to bring the best out of AAA titles.

The MSI Gaming X trio is currently available at £705/£749 and makes a compelling choice: The odd ball triple fan cooler and Mystic-light compatible RGB make this a GPU to be proud to display, whilst solid boost clocks mean this top tier offering will perform excellently. It’s currently involved in the RTX Call of Duty promotion as well, adding value if that’s a game of interest to you. Whilst it’s not cheap, the performance is unarguable.

Finally, if you’ve opted for a 1440p ultrawide or 4k rig, there’s good and bad news: The Good news is that RDR2 will run well, and it will look gorgeous on these displays. The bad news is that you’ll need your bank manager on side to afford the GPU to do it. Even the otherwise supremely powerful RTX 2080 super fails to meet 60fps average on high settings at 4k – leaving just one GPU truly capable of showing the best of this game: The RTX 2080ti. Even that will produce just over 60fps, averaging around 65fps and with lows dropping to 45fps in demanding scenes. This leads us to recommend adaptive sync as a highly desirable monitor feature to smooth out the delivery of frames if you’re gaming at these high resolutions. NVidia themselves recommend another trick: (URL- https://www.nvidia.com/en-gb/geforce/news/red-dead-redemption-2-pc-nvidia-recommended-gpus) Running the game at a lower resolution (3266×1836 for example) and using their ‘upscaling and sharpening’ process to restore some image quality to 4k. It’s down to you if you think that’s an acceptable compromise. 1440p ultrawide displays fare better, with a rock solid 75FPS average on high settings and no need to upscale.

Our current recommendation for an RTX 2080 ti is the EVGA RTX XC Ultra Gaming.

This GPU uses a twin fan, triple slot cooling system to keep temperatures and noise down on this 250W TDP card. It comes with a full suite of connectors including USB-C for VR, and importantly when you’re spending four figures on a component, comes with EVGA’s solid product after-sales support. There’s even the EVGA step-up programme, which could save a hefty dose of buyers remorse if Nvidia keeps doing Nvidia things and release an RTX 2080 ti Super within the next 90 days – pay the difference and you can upgrade to that (purely hypothetical you understand) GPU. At $1219/£1224 currently, this GPU is a solid offering of the current Consumer GPU champion.

There’s no doubt that Red Dead Redemption 2 is a new high watermark in GPU demands. Debate is currently raging as to if this is down to poor optimisation, or simply a function of the graphical fidelity being rendered out. There is certainly potential for driver optimisations to lift performance with time, with previously top tier GPUs like the GTX 1080ti not performing quite as we’d expect. The basic facts remain that this ambitious, beautiful open-world game will tax top tier current generation hardware to the limit. There comes a point where if you want to play a game as it was intended to be seen, you do have to buy the right tool for the job. The cards recommended in this article are well up to the task for this AAA title.