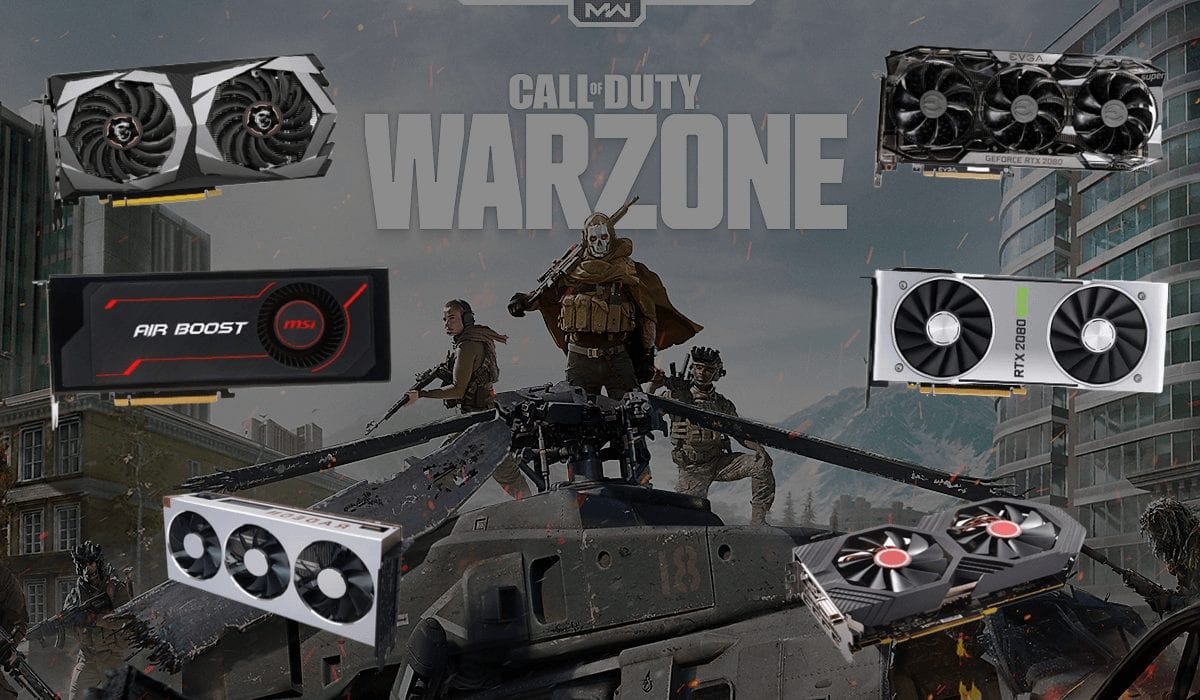 The Battle Royale and free to play game: Call of Duty Warzone has recently been released, so if you’re looking to upgrade or build a new PC to enjoy it at its best, then now is the time to do so. One of the first components you’re going to want to choose, is the right GPU for how you want to experience the game. In regards to other PC components, you’ll want an SSD for quicker loading times, 12 to 16 GB of RAM, and a 6-to-8 core CPU with 8-to-12 threads.

All these specs are relevant of course, because they depend on what kind of resolution and framerate you want to play the game on. If you are planning on playing the game casually, 60 FPS will suffice, while if you are looking to play competitively, you are going to want your framerate as close to 144 FPS as it gets. Running 144 FPS on an HD monitor is no easy task for a GPU, and the higher the resolution gets, the more demanding it will be on your system.

In this article we’ll list the best GPUs you can get depending on your desired resolution-framerate combo. We’ll mention the best Nvidia and AMD GPUs for both 60, and 144 Hz, for monitors with 1080p, 1440p, and 4K displays.

Now, these two graphics processing units are almost identical in terms of benchmarks, with a slight edge going to the GeForce GTX 1650 Super. This card comes with a base of 4GB GDDR6 V-RAM, and has a TDP of 100W (as opposed to the 150 TDP of the AMD 500 series) so it runs with cooler temperatures, and less noisy. The AMD RX 580 has a 256-bit memory bus width, and features 8GB of GDDR5 V-RAM. The difference in price range is about $10, with prices varying depending on the manufacturer of the GPU. What the Nvidia card has going for it, is that it is much newer than the RX 580, as it came out just a few months ago, whereas the AMD RX 580 came out nearly three years ago, and that can manifest itself in different ways. Both will do the job of running COD: Warzone on 1080p with 60 FPS of course, so the choice is yours!

Now let’s up the ante, and go for 1080p, but 144hz. That means you are going to want the game to play on at least 120 FPS, and ideally at 144 FPS or over. The minimum Nvidia card for the job, would be the RTX 2070 Super. Any Nvidia card above that will do the job even better of course. On the AMD side, we have the Radeon RX 5700 XT, which may lag behind the RTX 2070 Super, but should still get the job done.

When comparing the RTX 2070S with the RX5700 XT, there is a clear superiority of the RTX 2070S in terms of its benchmarks. However, the RX5700 XT can be bought for nearly $100 cheaper than the RTX 2070S, so it really depends on what you’re looking for. Both these GPUs have 8GB GDDR6 with a 256-bit memory bus and a memory clock speed of 14 GHz. The RTX 2070S has 22% higher average user benchmarks in comparison to its AMD counterpart, as well as a 14% difference in recorded FPS, and up to 64% better peak multi rendering. That being said, both can run COD: Warzone at over 120 FPS, so if you’re looking for just that, AMD’s choice will save you $100. If you’re looking to future proof your PC, and enjoy single player games with high framerates, then the 2070S is the way to go.

An increased resolution means more demanding graphics. For 60Hz though, it is still quite manageable. On the Nvidia side, for this resolution and these refresh rates, you are going to need at least a GeForce RTX 2060 Super. For AMD, the minimum would be the Radeon RX Vega 56. The winner between these two cards is quite clear-cut. The RTX 2060 Super is two years more recent, has 43% better user benchmarks (13% effective speed), 32% better effective FPS measures, and even comes at a $50 cheaper price tag. Both cards have 8GB V-RAM, though the RTX 2060S has a newer GDDR6 as opposed to Vega 56’s GDDR5. The Vega 56 is vastly superior in memory bus width, with 2,048 bits as opposed to the 256 bits of the 2060S, which is a key factor in why the Vega 56 can still run COD: Warzone at over 60 FPS at 1440p. If you hate Nvidia, or can find the Vega 56 at a (much) better price than the RTX 2060, go for it, otherwise the RTX 2060 Super is currently the superior choice.

At 144Hz is where things start getting difficult for existing GPUs available. Nvidia’s GeForce RTX 2080 Ti is the only graphics card that can really cut it, and still is barely doing so, reaching 131.7 FPS according to Computer Base’s benchmarks. It doesn’t truly reach the desired FPS heights, but it’ll still run the game at over 120 FPS, so it’s the best option you can get.

At 60 hertz, there are a few suggestions that will do the game justice, one being the Nvidia RTX 2080 Super, and AMD’s Radeon VII.

Once again, here the Nvidia RTX 2080 Super is the superior GPU as compared to the Radeon VII, and by quite a long shot. What the Radeon VII has going for it, is that it can run Call of Duty: Warzone in 4K at over 60 FPS quite consistently, and it comes for $120 cheaper than the RTX 2080S. The increase in price is somewhat justified, as the RTX 2080S will never fall beneath 60 FPS at the given 4K resolution. It has average user benchmarks of over 13% effective speeds, is two years more recent than the Radeon VII, and has 86% faster multi rendering speeds. Is this a bit over-kill for the game? Sure.

So, if you’re looking for 4k 60FPS gaming for Call of Duty, and other popular competitive multiplayer online games, then the AMD Radeon VII will do just that. If you are looking to also have the ability to play more demanding single-player games, and also want to prepare for the next generation of console games, then the Nvidia GeForce RTX 2080 Super is your best bet.

For 4K 144 Hz, you are going to need some serious horsepower to run COD:Warzone above 100 FPS at 4K – and the only workhorses up for the task at this resolution are the Nvidia RTX 3090 and AMD Radeon RX 6900 XT. These are the flagship cards for 2021, and are poised to bring gamers into the high refresh territory of 4K gaming, something that hasn’t really been possible before for AAA titles.