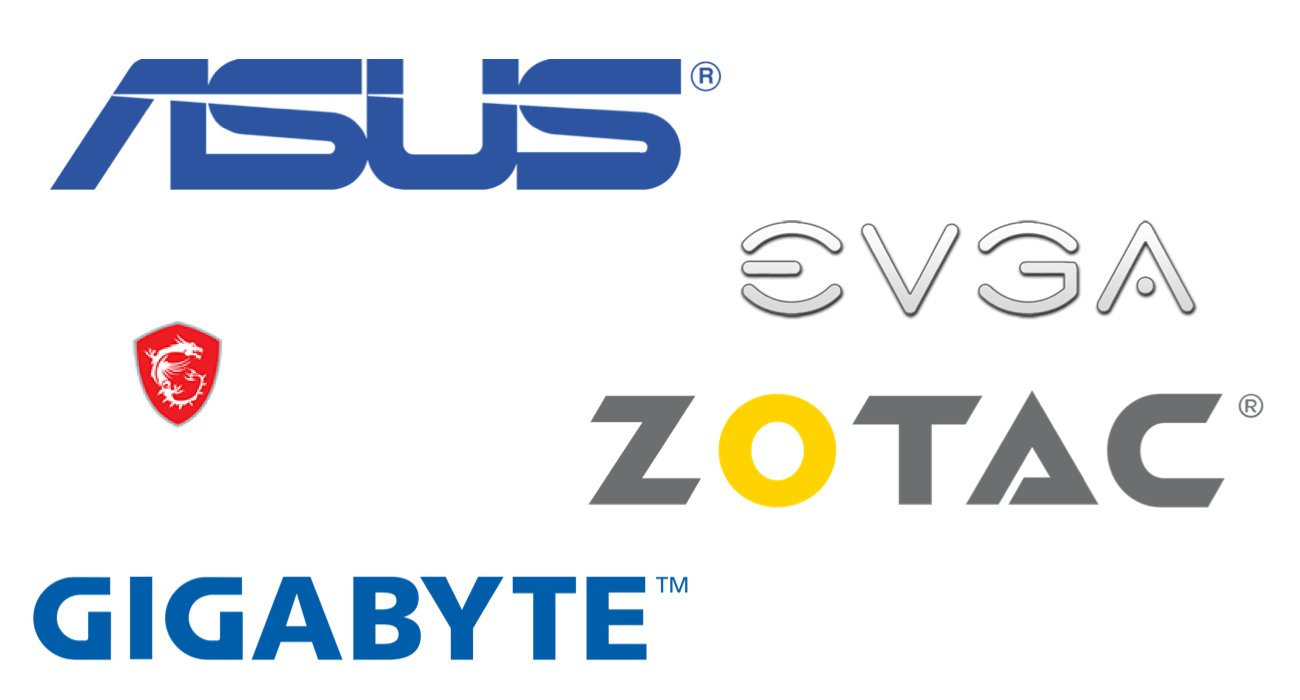 In this guide, we’re going to take a step back from specific components and talk generally about some of the major GPU manufacturers putting products into the market today. We won’t cover every single one, especially as some are pretty regionally specific (like GALAX), but we will look at some of the pros and cons of the major manufacturers, as well as some specific examples of GPUs that are representative of their reputations.

Choosing a GPU is always an exercise in budget vs. performance, but within even specific budget brackets, different GPU producers focus on different advantages. So while over generalizing is never a good idea, this guide will help you understand better the reputation of some of the big players in the graphics card market today:

We are starting with one of the most beloved components producer that is habitually coveted as one of the best places to start for any purchase. The best part of buying EVGA is the customer service. While no one wants to have a problem with a newly bought component, it happens sometimes that you receive a defective product or a product dies within the warranty period. Some companies have long RMA processes that are not even sure to end with the company honoring its warranty. But not with EVGA. EVGA always honors its warranties and goes out of its way to support is clients. On top of that, EVGA cards are fairly priced and give good value, and are well-built and reliable. They may not be the most flashy or cutting-edge designs, but they are good cards with a good company to back them up.

A great example of this rock-solid reliability is one of the newest offerings from EVGA, the EVGA 1660 Super SC Ultra Gaming. Despite a relatively simple design, the 1660 Super SC Ultra Gaming has quality cooling and is only around $10 more than the cheapest 1660 Supers out there at $240. And while that card has never had any reviews complaining about reliability, buying EVGA means that even if you do have a problem, you’re covered just fine.

MSI is one of the best known names in component production and are ubiquitious in the market. From motherboards to GPUs to cases to pre-builts, MSI is everywhere. And while sometimes this leads to cutting corners or weaker products, MSI has done a good job of keeping its lineup pretty strong from top-to-bottom. Because of their size, MSI is great in covering all budget levels, offering some of the high-end GPUs that have great overclocking headroom and advanced cooling solutions but also including some of the best value for money lines like the VENTUS labelled GPUs. Some of the graphics card labels have gone downhill in recent years, like the ARMOR line with high thermals and noise, but generally MSI cards are popular and maintain their value over time.

A great example of this is the MSI 2060 Super GAMING X. The GAMING X line is a popular, combining a nice bit of RGB flair with strong cooling and a middle of the road price point. On top of that, GAMING X cards typically arrive with a gentle overclock that can be tweaked to give some nice performance gains. This card does everything well without any major downsides, which is pretty much exactly what we think of MSI. And having no big drawback is something to be praised, especially with a company as broad as MSI.

ASUS is similar to MSI in that they produce a large variety of components. But where MSI has found a subtle-yet-distinctive aesthetic of black/silver/red with slight RGB, ASUS has jumped fully into the RGB mania that took over gaming in recent years. Luckily, they tend to implement the RGB well, offering good customization and nice looking cards. And to go along with the money ASUS has put into design, there seems to be an equal investment into producing high-performing cards. But with all of that RGB and performance, ASUS cards are almost always among the more expensive on the market. For those with the budget, the cards are great, but if you are trying to find the best bang for your buck, ASUS GPUs probably aren’t for you.

For the epitome of ASUS flash and performance, we see the ASUS ROG STRIX RX 5700 XT. With the new high-end card from AMD, ASUS incorporated some of its classic RGB accents on top of a strong heatsink and fans to create one of the higher performing 5700 XT GPUs that comes with a pretty strong overclock out of the box. But, as with many of these high-end ASUS cards, the RGB and robust cooling comes at a price. While the most inexpensive 5700 XT cards come in right around $400-$410, the ASUS ROG STRIX version costs $470. So if you have the budget, it’s hard to find fault, but if you are a bit more concerned with price-performance, our next manufacturer could be more up your alley.

Gigabyte is nearly as widespread as MSI and ASUS with their lineup, but seem to focus more on GPUs and motherboards. And while this has led to some strong success in the motherboard market with the recent Z390 and X570 lines.  On the other hand, the GPU lineup has never seemed to achieve the same hype, despite some really strong offerings, especially at the budget level. And to complement those strong budget cards, Gigabyte has some very strong high-end offerings that are perhaps the best-looking cards on the market. Customer service is not always praised as strongly as someone like EVGA, and the catastrophic failure of the VEGA GPU release has dogged Gigabyte for years, but overall, their GPUs look good and offer great value at both the budget level and high-end of the spectrum.

To truly capture Gigabyte’s GPU spirit, we actually need to look at two different cards. To see its great value at the budget level, we offer the Gigabyte Gaming OC 2070 Super (which comes in white and black!) and to see the high-end aesthetic, the Gigabyte AORUS 2070 Super. On the one hand, the Gaming OC offers a triple-fan cooling at a very reasonable $540 (black) or $550 (white), and comes with a moderate factory overclock. There are very few AIB offerings with three fans at such a modest price increase over reference, let alone offering in both white and black. And at the high end, the AORUS is just a beautiful card that should perform extremely well and have some great overclocking headroom.

Of the five manufacturers on this list, Zotac might be the least-well known. That isn’t because they have been around for a shorter time or because they don’t have as many cards out there, but rather because they seem to do less marketing and are more subtle when it comes to throwing their weight around. Zotac only produces for Nvidia, and is one of the reference producers, so they really know their way around GeForce products. Zotac tends to focus on the budget tier, but offers extremely compelling pricing within that lower-end of the market, often coming in at the same price as reference models. In addition, one thing we love about Zotac is that they tend to produce plenty of ITX offerings for our SFF builders. They may not be quite as design-oriented, and they have no true ‘high-end’ cards within each segment, and then they tend to resale for less due to the lower name recognition, but they still offer very reliable bang-for-your-buck GPUs.

For this one, we had to pick the Zotac 2070 Super Mini IceStorm as the representative of this brand. Not only is this card an ITX card that still offers the full power of the 2070 Super and a dual-fan design, but it actually is cheaper than reference models at $490. In terms of value and highlighting the commitment to great ITX designs, this card really shows off the best of the Zotac world.

This article is a bit of a different approach for us at PremiumBuilds and serves as a broader look at some of the major manufacturers out there. This guide shouldn’t replace a dedicated guide to a specific GPU model, but can help you orient your search when trying to navigate amongst all of the different producers and partners that advertise their lineup. We’ve given a few examples of cards we think represent these brands, but be sure to research the specific model you are looking at getting no matter which manufacturer you choose to have some in-depth reviews.