AMD vs Nvidia: Which GPU is best for you? 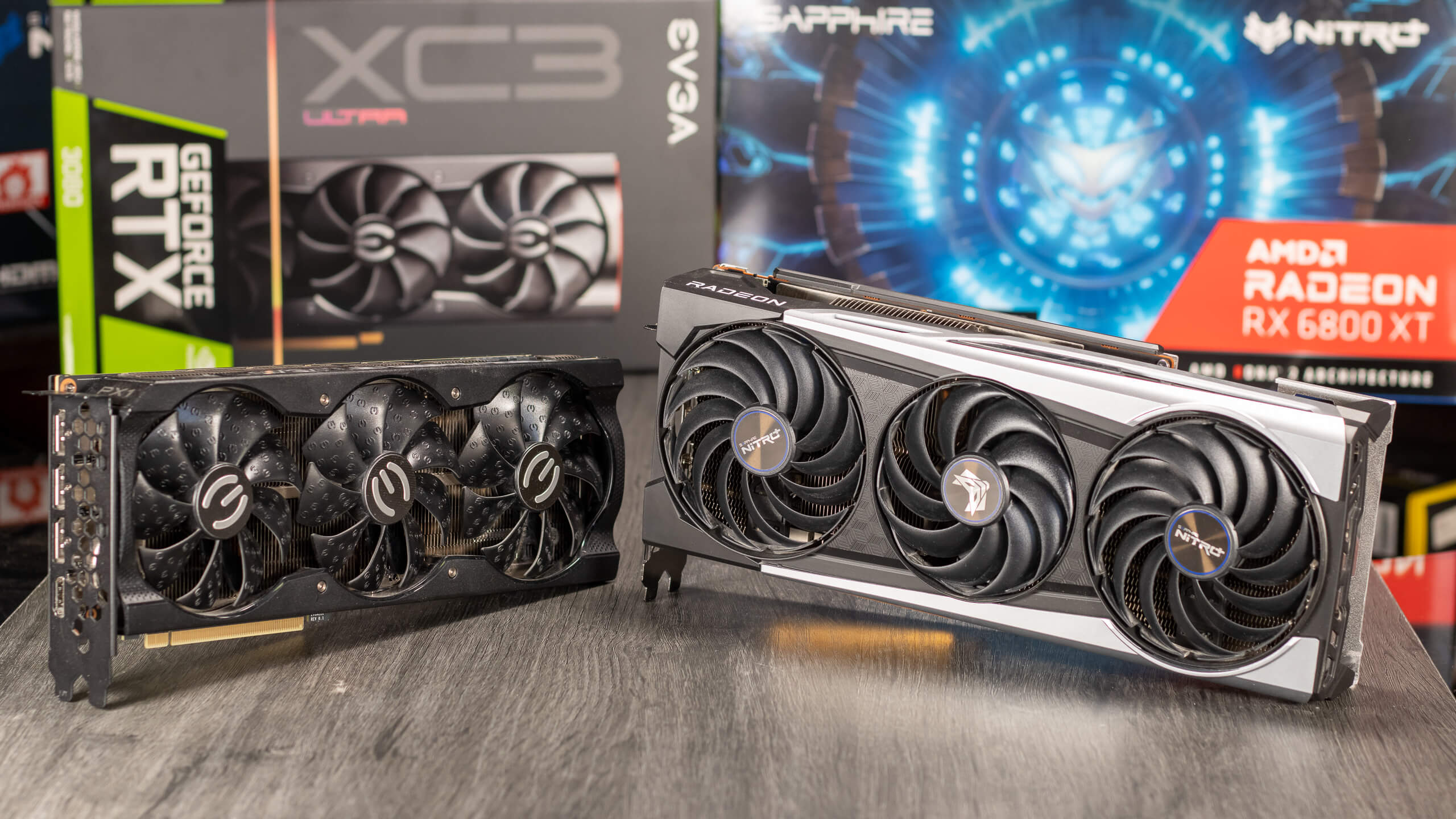 The GPU is arguably the most important component in a gaming PC, and your choices start with this simple question: should you choose AMD or Nvidia? Though Nvidia has historically dominated the graphics scene, today the two vendors are perhaps more equally matched than ever before. Still, there are key differences between AMD and Nvidia GPUs which you should consider before making a decision.

Contents hide
1 Performance and Pricing
2 Ray Tracing and Upscaling Technology
3 Software Features
4 G SYNC and FreeSync
5 Driver Suite
6 So, which should you go with?
6.1 Related

Unlike the prior RX 5000 series, the new RX 6000 series makes a serious attempt to dethrone Nvidia at the very top. Here’s a rough tier list:

It should be noted that this list was created using benchmarks conducted at 1440p and without ray tracing or DLSS or other related settings. The resolution is relevant because the margin between RX 6000 and RTX 3000 GPUs depends on it. As the resolution increases, Nvidia actually gains ground on AMD. I decided to just focus on 1440p since it’s right in between 1080p and 4K. If you want to min-max framerates, AMD tends to do better at lower resolutions and Nvidia at higher. That being said, there’s no reason why you can’t use a 6800XT at 4K or a 3080 at 1080p, since the difference is only a handful of frames either way.

Unlike previous generations, AMD is not positioning itself as a budget alternative; consequently, the RX 6000 series is the most expensive generation of AMD GPUs in a long while. AMD still represents better bang for buck, but barely. There should not be a significant dilemma when choosing either Nvidia or AMD if you’re concerned about value.

Nvidia provides better options in the “Lower High End” tier thanks to the introduction of the RTX 3060. The RX 5000 series is certainly fine but it lacks major features the RX 6000 series introduced. Both vendors, however, cover nothing below $300, which means you have to spend hundreds of dollars for the newest GPUs. If you want to spend less money for less performance, you have to buy an older GPU.

Some other tidbits: AMD tends to offer a little more memory throughout the stack, but it’s not clear whether or not this will actually matter. Nvidia’s power consumption is usually much higher than AMD’s, and given the performance that means efficiency is also lower, sometimes by a wide margin.

Ray tracing is the next big thing in gaming, and Nvidia was the first to support it starting in 2018 under the RTX brand. AMD finally introduced ray tracing with the RX 6000 series, but the performance just isn’t as good as Nvidia’s. Both AMD and Nvidia GPUs lose frames when enabling ray tracing, but RX 6000 GPUs lose far more. This isn’t necessarily a critical loss for AMD, however, since ray tracing is supported in very few games and sometimes doesn’t improve visual quality very much. It’s difficult to tell how fast the industry will adopt ray tracing, so I can’t say whether or not AMD’s poorer performance really will matter.

Super sampling and visual smoothing technologies are also the next big thing. Alongside ray tracing support, Nvidia also introduced DLSS (or deep learning super sampling). Like anti aliasing, DLSS takes a lower resolution image and makes it look better. However, just like ray tracing, DLSS is not present in many games because it requires a high level of support from developers and Nvidia. In the future, however, we should expect more games to utilize DLSS because the popular game engines Unreal and Unity support it natively. It appears that developers will soon be able to easily support DLSS, but we will have to wait and see.

AMD, meanwhile, doesn’t really have its own DLSS-like technology. They have been teasing FidelityFX Super Resolution, but there are basically no details about visual quality or performance. All AMD has confirmed is that it will arrive before the year ends and that it doesn’t use machine learning. Though, AMD didn’t need to confirm that second point since we already knew RX 6000 doesn’t have machine learning hardware. AMD does have Radeon Image Sharpening (RIS), but all this is a very primitive feature by comparison.

Another distinct advantage Nvidia has on AMD is NVENC. I’ll spare you the technical details on what exactly it is, all you need to know is that Nvidia GPUs usually record game footage at a higher quality than AMD GPUs. You aren’t required to use Nvidia’s first party Shadowplay software to use NVENC, too. Third party programs like OBS (one of the most popular recording and streaming applications) support the feature.

AMD does however have two unique features which Nvidia has never tried to emulate: Radeon Chill and Radeon Boost. Radeon Chill was made back in 2016 when AMD GPUs were very power inefficient. It lowers performance (and by extension, power consumption) when you’re not moving much. If you’re really concerned about power efficiency, it might be a worthwhile feature. Radeon Boost was introduced in 2019 and it is more broadly applicable. Radeon Boost will dynamically lower the resolution when you move in order to increase the framerate. Of course, when you’re moving around, you probably won’t notice the resolution decreasing. Sadly, both features don’t work in every game. Chill apparently works in “most games” except for Windows store games, and Radeon Boost only works in a dozen or so games.

I should also mention G SYNC and FreeSync. These are anti-screen tearing technologies and back when they were introduced, they were fairly simple first party standards. Nowadays, there are multiple versions of each. There are two versions of G SYNC: the proprietary one using an FPGA (which increases costs significantly) and the one based on Adaptive Sync, another anti-screen tearing technology which is vendor agnostic. FreeSync on the other hand is easily the worst offender for different versions, however; there is regular FreeSync, FreeSync 2 (which is seemingly discontinued), FreeSync Premium, and FreeSync Pro. Generally speaking, the different categories reflect not the quality of the technology, but the monitor. They’re like those HDR labels monitors have been shipping with recently. Both technologies do the same thing more or less.

Finally, the race is also even when it comes to recording game footage. Both vendors offer GPU based recording software: ReLive for AMD, Shadowplay for Nvidia. It used to be the case that AMD didn’t even have a Shadowplay alternative, but some years ago ReLive was finally introduced. Besides for NVENC, Nvidia doesn’t have a significant advantage over AMD for recording games anymore.

This section focuses not on driver stability or performance, but the driver suite UI and features. Both Nvidia and AMD of course offer first party software so that you can customize your experience. Many of the above features can only be enabled or customized through these suits.

AMD’s driver suite requires no login of any kind and has a plethora of settings. However, most of the graphics settings don’t appear to be very useful. The only ones I would adjust would be tessellation and Enhanced Sync (which is a software mitigation for screen tearing). There are also some color and display related settings I also have never seen any reason to use, except for FreeSync and Virtual Super Resolution. On the other hand, there are tons of useful settings like those for ReLive, Radeon Boost, Radeon Chill, and Wattman, a built in overclocking tool which I personally really like, though not everyone feels the same way. Though AMD’s suite could use a trim, overall it’s quite useful.

When it comes to UI design, AMD’s driver suite looks good and performs well. It has actually been a primary goal of AMD’s since 2015 to deliver modern looking driver suites; you might even think AMD has gone a little overboard. Browsing from menu to menu and from option to option is fast and happens at a high framerate. There are a few themes to choose from and they all look pretty nice.

Nvidia, on the other hand, has gone a very different direction. When you install Nvidia drivers, you get two choices: install just the driver suite or install the driver suite with GeForce Experience. I’ll get to GeForce Experience in a moment, but first, the driver suite. It is atrocious. It really looks like it hasn’t been redesigned since the XP days. When going from one menu to another, or changing a setting, there’s usually a good second or two of lag. How could there be lag when this UI is so barebones?

But perhaps the worst thing about the basic driver suite is that you don’t get all of the features and settings. To use features like Shadowplay and Ansel, you need GeForce Experience, which is more of a media oriented extension of Nvidia’s driver suite. It requires you to login with an account which is pretty annoying, even if it’s only once. But if you don’t want Shadowplay or Ansel or the other media features, GeForce Experience is almost entirely useless. GeForce Experience also doesn’t have the same customization options as the base UI, because it’s not a replacement.

AMD is the clear winner when it comes to driver usability, though this probably won’t matter to most people, just those who like to tinker around with their GPU.

So, which should you go with?

It’s been about 15 years since the PS3 and the Xbox 360 faced off, and I can’t help but draw parallels between that debate and this one. It’s really hard to choose between AMD and Nvidia because they’re so close. Neither one holds a significant advantage over the other. However, Nvidia has a significant head start on ray tracing and upscaling technology, which will be important in the future. But let’s consider one thing: ray tracing and DLSS are still uncommon features, and we’re already into the second generation of ray tracing GPUs. By the time ray tracing and DLSS are truly industry standard features, we might already have RTX 4000 and RX 7000 GPUs. In a couple of years, perhaps AMD will catch up to Nvidia or even beat them.

Whether you go with AMD or Nvidia, you’re getting a similar experience overall. If you have very particular needs, then you might find that one is really much better than the other. Most people, however, won’t be able to tell the difference.