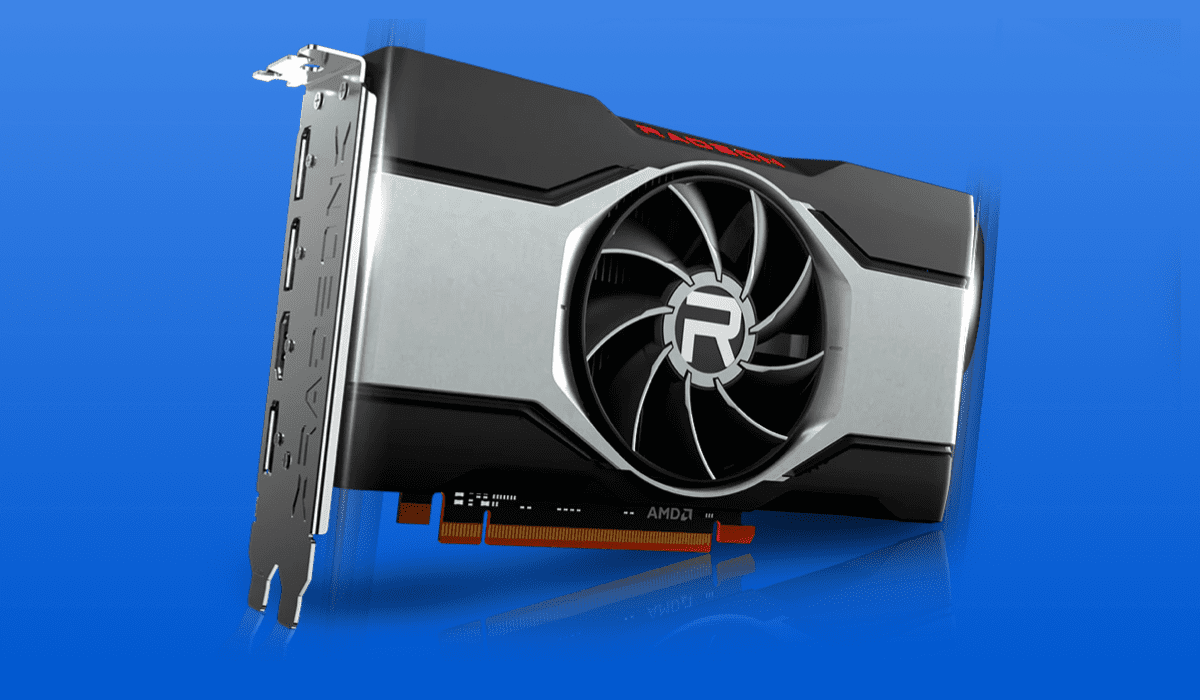 The GPU market has now spent nearly a full year in crisis, with virtually all GPUs being sold out instantly or available only at highly inflated prices. In this turbulent and frustrating market, AMD has released a ‘mid-range offering, the Radeon RX 6600XT. This is a GPU aimed squarely at Nvidia’s RTX 3060 and promises top tier 1080p gaming. In this article, we’ll examine the specifications and first performance reports to find out if it’s something we can recommend to you.

There are a number of oddities in the specifications of the 6600XT. Primarily, whilst it has 8GB VRAM which is plenty for a card targeted at 1080p gaming, that memory is accessed across a 128-bit bus and limited to 256GB/s bandwidth because of that. However, VRAM capacity isn’t the primary concern in the market these GPUs are aimed at – all offer plenty of VRAM for 1080p or light 1440p gaming, and the 12Gb capacity of the 3060 doesn’t offer any performance benefits and is a function of the memory bus width.

Another subtle but interesting detail rests in the PCIe specification of the 6600XT, with just 8 PCIe 4.0 lanes to the CPU. This is of course plenty of bandwidth for a PCIe 4.0 capable system – even top-end cards like the RX 6900XT don’t approach that bandwidth requirement. However, in testing the performance impact of pairing this card with a PCIe 3.0 system appears to be around 3-5%.  If you’re using an AMD B450 Motherboard, 10th generation Intel CPU or a PCIe 3.0 Riser cable to mount your GPU, there will be a slight performance penalty running this GPU at just 8 PCIe 3.0 lanes, but it’s not enough to be a deal-breaker.

AMD have also cut back on the infinity Cache, now just 32MB, likely in a bid to reduce die size and so costs for this GPU. Again this feature was one of the reasons for RDNA2’s impressive performance in other cards so the 6600XT will suffer relative to them.

The TDP or ‘thermal design power’ is the lowest of the competing cards at just 160W, and testing shows that AMD have kept power drawdown throughout. This card will operate well with smaller cooler solutions and in more compact PC’s, as well as being less demanding of power supply specification, with a recommendation of just 550W and up. This helps builders on a budget integrate it into their PC.

These factors will undoubtedly negatively impact performance vs competing cards although it’s the overall performance we’re interested in and the whole package that matters.

AMD have firmly targeted gaming at 1080p resolution with this card and touted ‘better than RTX 3060’ levels of performance. Their own tests anything from 5-30% uplift but that’s in a limited selection of games. Wider testing has been much less favourable, with this card matching up to the 3060 in most instances but trading blows depending on title and settings.

Nonetheless, this card is a strong performer at 1080p, with high frame rates at high settings. It will work well for Esports and AAA gaming alike at 1080p, and less demanding gamers will also find its performance at 1440p resolution acceptable. Ray tracing is possible, but performance and quality of results lag well behind Nvidia’s implementations so it’s likely most will prefer not to enable this feature on this GPU.

In terms of productivity, Video and 3D artists are likely better off looking at Nvidia GPUs if at all possible. The 3060 offers versatile and well-supported CUDA cores, RTX cores that greatly accelerate some 3D rendering processes via the OptiX renderer, and 12GB VRAM to assist in larger models and renders. The RX 6600XT does have hardware encoders present and will do a fine job particularly incompatible software such as DaVinci Resolve. However, the VRAM limitations in both capacity and bandwidth make it sub-optimal and we would not recommend this card for a content creation system.

It’s difficult to talk about ‘competition’ when prices are so variable and stock is so limited. This card is marketed to compete with the Nvidia 3060, which should sell at around $350. At that pricing, it isn’t an attractive option. Whilst it performs slightly better in some games, it lacks some nice to have features and costs around $50 more. Again, at MSRP the RTX 3060 Ti at its MSRP of $399 would be a clear choice; it’s a very strong GPU more than capable of 1440p gaming and exploring the potential of RTX and DLSS. However, neither of those cards are available at MSRP and command more like $600 and up. The 6600XT at about $400 is clearly the better option in those circumstances.

On the used market $400 or so will net you an Nvidia GTX 1080 Ti, RTX 2070 Super, or RX 5700XT perhaps. All of these remain viable options and will perform similarly to the RX 6600XT, but of course are older and carry the risks inherent in second-hand purchases.

Given the market circumstances, The RX 6600XT represents a good opportunity to build a strong 1080p gaming system, or 1440p all-rounder, at an acceptable price for the performance it offers. Whilst the price would normally see it fail in straight competition with Nvidia offerings, the fact is this card is actually available and is selling at this time at or near to MSRP. AMD has promised substantial stock of this card and partner models. For the time being, you can again use it as the basis of a strong 1080p gaming PC at under $1000 total build cost. For that reason, it’s a good buy right now if you need a PC, or want to end the eternal GPU hunt and can find one at $400 or less.