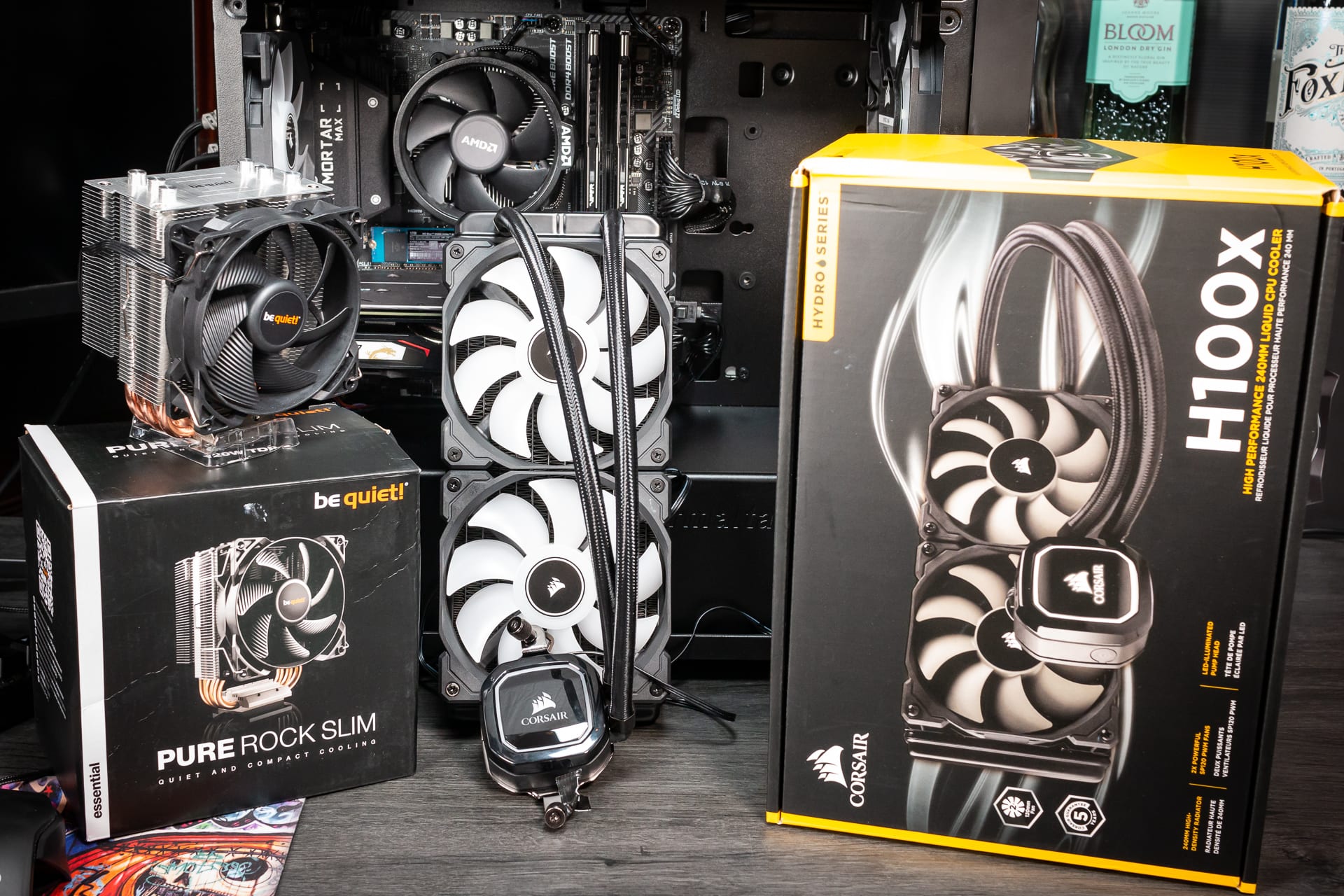 Why you need a CPU cooler, even for Ryzen.

We’ve been busy putting the Premiumbuild test rig through its paces and one of the first test series we ran was to compare a variety of cooling solutions for AMD Ryzen systems. Why? Because common knowledge has it that the Wraith Stealth cooler that ships with the Ryzen 3600 is adequate and we wanted to put that to the test.

We used the supplied Wraith Stealth CPU cooler with standard pre-applied cooling paste and only the supplied 120mm Case Fan. The Wraith stealth is a simple Aluminum block with fins at the sides and a downdraft fan to blow air through it. This configuration represents the budget builder who has put everything towards core components. Using only the supplied materials is the single exhaust fan and stock cooler capable of keeping the CPU working at full capacity?

We added a pair of 140mm fans to the basic configuration, a common first step to improving cooling. We were testing if changing the case to a ‘positive pressure’ set up can keep temperatures at acceptable levels during a torture test. A pair of 140mm intake fans cost around $20 so this is a low cost option.

We removed the stock paste and reapplied ‘Arctic Silver 5’, a common lower budget thermal paste. We wanted to test if thermal improvements could be made from the relatively low outlay of a tube of thermal paste applied during the first build.

We removed the standard Wraith Stealth cooler and replaced it with the BeQuiet! Pure Rock Slim tower cooler. This cooler is available for £20/$35 and uses 3 heat pipes and a 92mm fan. It represents one of the lowest cost and most basic aftermarket cooling solutions available for the AM4 fitment. This cooler is as simple as they come with 3 heat pipes, a cold plate and a fin stack to dissipate heat. The stock thermal paste was used. We combined it with the pair of 140mm fans, our reasoning being that a competent builder would be unlikely to buy a tower cooler and neglect additional intake fans for a total cooling cost of around $40/£40/45€.

Finally we went all out by fitting a Corsair H100x 240mm AIO. This liquid cooling loop combines a pump and radiator to pull heat away from the CPU via a copper cold plate. It ships ready to fit and includes a pair of 120mm fans. Standard mounting location for the radiator is in the front of the case with the pair of 120mm fans as an intake so the 140mm fans were removed. At £65/$72 it’s the next tier up in price and as much expense as we’d ever recommend for a low TDP cooler such as the Ryzen 3600.

The system comprised of a Ryzen 3600, 16Gb of DDR4 RAM running at 3600MHz CL15. Infinity fabric speed was also locked at 3600MHz. PBO, AMDs own overclocking algorithm was enabled. We used a GTX 1660 Super GPU and the system was built in the Thermaltake Versa H17 case. We chose this case because it’s representative of most cases on the market today with a front intake, rear exhaust, a PSU shroud and a wide variety of cooling configurations to choose between. The aim here was to build a representative system and explore whether stock cooling was adequate, and where the benefits of more expensive cooling solutions stop being worthwhile. Fan curves were left as stock on the MSI Mortar B450m Motherboard, representative of the fact many users do not delve into those settings and to allow the system to manage its own temperatures as well the hardware allowed.

After 20 minutes of stress testing our CPU core temperatures logs were as follows:

In these logs we can clearly see the limitations of the stock AMD Wraith Stealth. In 3 separate configurations it was not able to keep CPU temperatures below 90°C.

With just a single exhaust fan to expel air from the case the CPU takes 90 seconds to exceed 90°C and is at 95°C and thermally throttling at the 7 minute mark.

Adding two intake fans did little to help and the cooler performed much the same. The initial lag is mainly down to the 140mm fans keeping overall case temperatures lower at the outset, however, the cooler is quickly overwhelmed and takes just 2 minutes for the CPU to breach 90°C. After 10 minutes the CPU has hit 95°C and is thermally throttling to protect itself whilst the fan made a lot of noise at maximum RPM.

Adding aftermarket thermal paste helps but cannot solve the inherent limitation of the stock cooler (Orange line). The CPU now takes around 4 minutes to breach the 90°C threshold and ultimately saturates at 93°C instead of 95°C. The CPU is still throttling after 12 minutes of this abuse, but not by as much. Performance is still negatively affected.

Moving to the aftermarket solutions, first let’s consider the performance of the BeQuiet Pure Rock Slim. Here we see that the temperature trace is more erratic, indicative of the heat pipes rapid response to temperature changes in boiling the liquid they contain to vapor, as well as the better transient response of the fan cooling fin stacks and heat pipes rather than solid aluminium. The starting temperature is much lower because this cooler is better at keeping idle temperatures under control, and the temperature rises at a much slower rate. Ultimately it becomes heat saturated at around 87°C and this does not prompt thermal throttling of the CPU. This £20 cooler is able to cope with stress testing the Ryzen 3600 in 30°C ambient heat which is pretty remarkable and a big step up in performance from the bundled wraith stealth.

Finally we move up to the Corsair liquid cooling loop. Again we see that it starts with an advantage by holding idle temps lower than any other cooling solution. From there it’s clear that the thermal capacity of the liquid coolant plus other components buy it significant time and it warms up slower than all other solutions on test. By 20 minutes it has reached the same temperatures as the Bequiet tower cooler. This really makes the performance of the Bequiet! all the more impressive and shows why a simple tower cooler is such a popular solution. Again the CPU is prevented from throttling so performance is maintained. At $72 the Corsair isn’t really a cost effective option in pure thermal performance vs a tower cooler and fan combination that costs around half as much. It depends if you find the other features of a liquid cooler valuable to you.

Other considerations: System and GPU temperatures.

We logged complete system data during these tests to see if there were any unintended consequences: For example would removing the down draft fan of the wraith stealth negatively impact MOSFET temperatures? Did the GPU suffer thermally when subjected to warmer intake air of the AIO radiator? The reason we haven’t graphed this information is because there’s very little to show. System (52°C -56°C) and MOSFET temperatures (54°C -57°C Peak) were nearly identical for all configurations and never worryingly high. The GPU used was MSi’s GTX 1660 Super Gaming X and it faired well. Despite being at 100% load it never exceeded 73°C. It ran a degree hotter in the AIO configuration but that is not a concern.

This test was designed to expose the limitations of the stock cooling solution of the Ryzen 3600 and 3600X. It’s fantastic that AMD bundle these coolers to allow PC builders to get a working PC with minimal additional purchases. The limitations become apparent where you wish to push the limits. If you live in a hot climate, plan to overclock your CPU or intend on long gaming or productivity sessions then you should absolutely consider a cooler upgrade to get the most out of your Ryzen CPU. Noise is another factor to consider. Whilst the Wraith Stealth isn’t particularly loud it does emit a high pitched whining noise that can become annoying: The BeQuiet! Pure Rock slim and the Corsair H100x were both noticeably less intrusive under test.

If you do nothing else it’s worth replacing the stock thermal paste with this upgrade, the Arctic Silver 5. At just $6 it’s the cheapest thing you can do to help CPU temperatures and thus performance. However we don’t recommend buying a more expensive thermal paste if you’re sticking with the standard cooler: as soon as you’re spending $10 that money would be better going towards a complete cooler like the Hyper 212.

The Pure Rock Slim has impressed us with the results in this test as well as just in general use. It’s more than capable of keeping the Ryzen 3600 or 3600X frosty and is significantly quieter than the wraith stealth in operation. Our only misgiving is that the fitment mechanism for the AM4 socket necessitates it being fitted with the fan pointing upwards rather than towards the back of the case but this is a minor aesthetic point. If you have a tight budget or simply want better cooling and lower noise then this is a fantastic option at around £20.

The tower cooler has been an enduring feature of PC builds and none is more tried and tested than the Hyper 212. This Black edition model is updated with slick anodised looks and is AM4 fitment ready. I’ve chosen it over the BeQuiet! Under test because in the US it’s the same price but has 4 heat pipes not 3, and also fits in the more aesthetically pleasing orientation pointing towards the exhaust fan. To supply cool intake air we recommend a pair of Arctic’s F14 140mm fans. These fans move more air whilst turning slower than their 120mm equivalents, lowering total system noise. For $57 total you’ve got about the best cooling solution you’ll ever need for a Ryzen 3600, 3600X or even 3700X.

The Corsair H100x is a fantastic cooler – it’s easy to fit on the AM4 socket and quiet in operation. The simple white LED accents on the pump head lend an air of classy restraint to any build, and the bundled fans negate the need to buy additional intake fans in most case configurations. We hesitate to recommend any AIO more expensive than this for a Ryzen 3600 – the CPU only dissipates 90W under peak load and pairing a $200 CPU with a cooler in excess of $100 makes no sense if it pushes you towards the price where a Ryzen 3700X is affordable instead. If you can afford the $72 and want a good looking cooler that performs excellently, the Corsair H100x is a great choice for Ryzen builds.