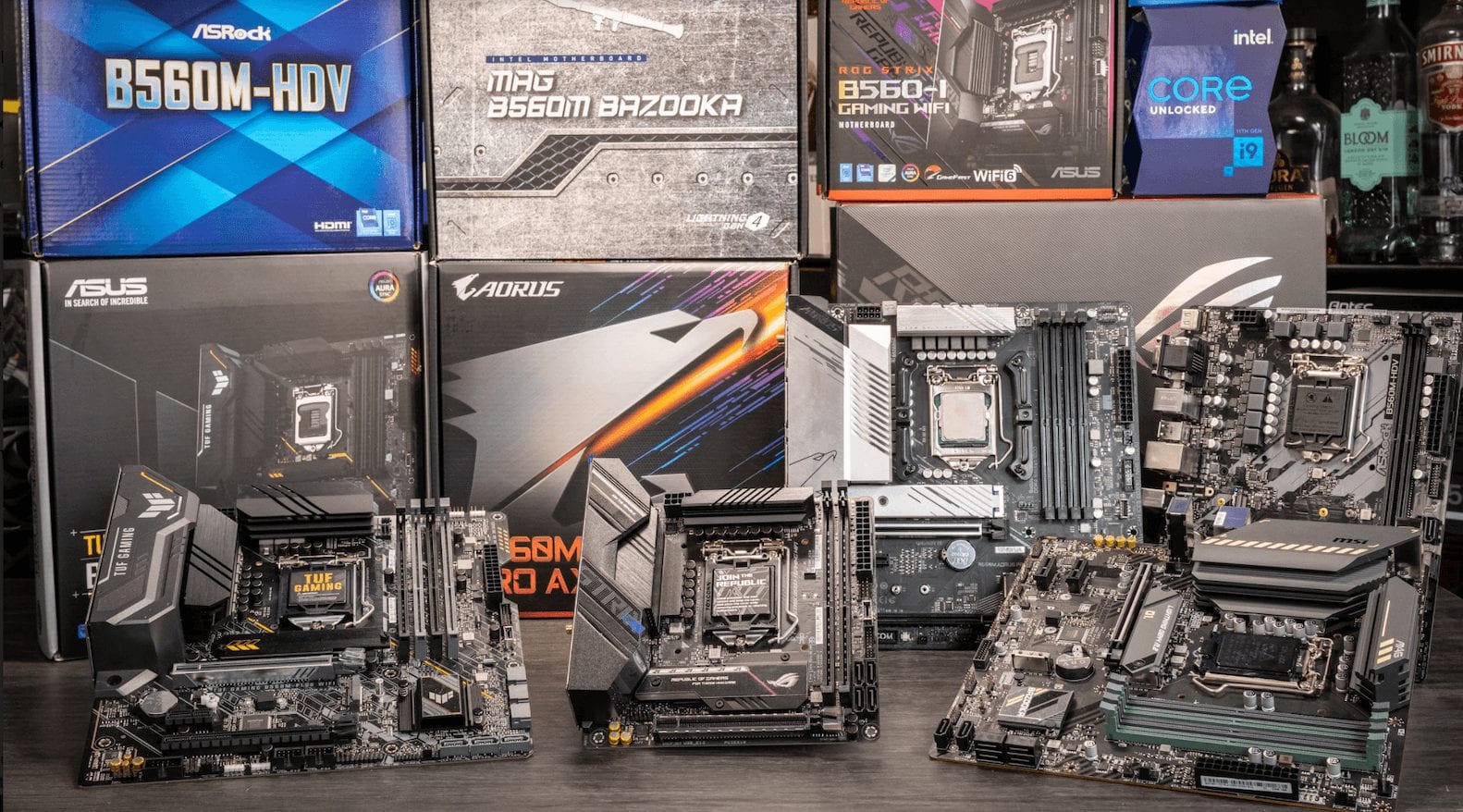 In our review of the best B560 motherboards, we found a number of anomalies in their behaviour. In this article we’ll document what we found, to help you understand the problem and avoid the pitfalls. Some boards can be fixed by paying attention n to their settings in BIOS. Others cannot be saved and should be left on the shelf. So lets’ take a look at the potential pitfalls of the B560 motherboard range.

One of our first tests was a simple Cinebench R23 run, but given that the CPU and configuration were the same it yielded some surprising results:

The MSI Bazooka delivers 1500 points lower score than the two ASUS boards and the Gigabyte Aorus Pro. The ASock B560M HDV is about 800 points down on optimal CPU performance.

Let’s look at what happens if we dig back into BIOS and remove the power limits:

Clearly, something is up here with the ASROCK HDV and the MSI B560 Bazooka. The Bazooka now matches the other boards on test, the ASROCK performs better but still falls a couple of hundred points short of optimal performance.

To work out what’s going on, we compared logged metrics throughout these runs at default settings, specifically power consumption and CPU clock frequencies over time:

This graph clearly illustrates the differences in behaviour between these three boards. Here the solid lines represent core clock speeds, the dashed lines the power delivered to the CPU. The ASUS maintains power of about 110 watts throughout the test, keeping core clocks at 4200MHz. This is the result of ‘Asus multi-core enhancement’ being on by default, although the initial BIOS screen does advise you of this, I don’t expect its explanation to mean much to most users, except it seems like a good idea to leave it on.

The ASROCK board delivers 100 Watts throughout the first portion of the test and holds 4.2GHz all-core clock speed but then drops to 65W the long term power limit after about 50 seconds. This has the effect of cutting core clocks to 3.5GHz and results in longer test duration, and lower score.

Finally, we see the MSI Bazooka: Like the ASUS this initially delivers 110 Watts, and 4.2GHZ clock speed, but ramps down to 65W at just 24 seconds. Thereafter it holds a significantly lower 3.3GHz clock speed for the remainder of the test, finishing last and delivering the lowest score. This is a function of the ‘stock cooler’ settings being applied in BIOS.

This behaviour is the results of different implementations of Intel’s power specifications. Short term power should allow for 125W even on this i5-11500 which has a nominal TDP of 65W – that’s its long term power limit. We see it draw 110W on most of the boards because that’s the power required to achieve its maximum allowable all-core boost clock.

One of these graphs is more insidious than the others, and it’s not the MSI. If we adjust the power limit behaviour through MSI BIOS by selecting ‘Tower’ or ‘AIO’ cooler the MSI performs in line with the other boards. For the ASRock HDV, this means setting the power target, but it won’t allow user input of 125W, just 100W. Why is that?

This graph shows us why: We ran Cinebench for a 10-minute loop with power limits set as high as possible on the Asrock HDV, and the i5-11500. Here is power delivery vs Clock speeds over the duration of that test, 8 loops of the rendering task:

For the first three runs, all appear to be relatively normal, except that the CPU is only getting 100 Watts when it will use 110W for peak performance. By the fourth run we start to see something different though: The board spikes, then cuts power. Core clocks are no longer held at 4.2GHz but instead begin to fluctuate below that. As the runs repeat we see increasingly ragged behaviour. This VRM is failing to deliver clean power even at a reduced 100W level and is throttling the CPU as a result. Performance suffers. In the long term, if subjected to this workload, it’s clear the VRMs are over-extending themselves. And in case you’re thinking: ‘Surely that’s CPU temperature throttling’ The raw data shows that no core exceeded 60C throughout this test, and no core recorded thermal throttling at any point.

So, this is behaviour with a 65W rated part, an entry-level i5 CPU.

What happens is you dare to put a more power hungry chip on these boards?!

To test, we installed the i9-11900K on each of these boards, using unlimited power settings, to see what they were capable of. For comparison we’ve included the result this CPU gives on the ASUS ROG Maximus XIII Z590, a motherboard with insane VRMS capable of supplying well over 330W to this chip under demanding loads.

Here we can see the consequences of weaker VRMs. Both the MSI and the Asrock HDV, the two cheapest boards in this test, deliver substantially sub-par results. The Gigabyte and two Asus boards both achieve ‘full’ performance for this demanding CPU, nearly matching the Z590 at default behaviour.

Again, looking at the metrics, we can see how default board behaviour has a drastic impact on performance:

The Gigabyte is the only B560 motherboard that delivers sufficient power to reach a 4.7GHz all core speed, at 170W consumption. It maintains this for the duration of the test and records a score of 15,000 representing the potential of this CPU. The MSI initially ramps to 170W deliver as well but fails to lift core clocks beyond 4.2GHz and quickly falls back to a 130W power delivery, PL1. From there it maintains 4.2 GHz of the duration of the test.
Finally, the ASRock HDV starts out delivering about 135W for 18 seconds, then drops to the 65W PL1 limit. That means that the clocks fall back from 3.7GHz to 3.1GHz where they remain until the workload is complete. The ASRocks score in this test is just 10098. And as a reminder, that’s BELOW the score the six-core i5-11500 can post in this test given adequate power. Simply put: The CPU can only do as much work as you supply it power for. This ASRock motherboard limits that power enough to make the 8 core i9-11900K perform the same as a six-core i5-11500 in an all core workload, and if you don’t adjust power limits in BIOS, it’ll even make the i5-11500 drastically underperform. If you do lift those power limits and then subject the i5-11500 to demanding but entirely reasonable workloads, the VRMS can’t keep up.

Conclusions and the root cause

Fundamentally, the blame lies with Intel. This kind of underperformance due to power limitations is down to their inability to make the Rocketlake CPUs more efficient. Remember, none of the Ryzen Zen 3 CPUs, not even the 16 core 5950X demand more than 125W for full performance. Here we have a six-core part needing 115W to perform to full potential and motherboards failing to deliver the 170Watts that the 8 core i9-11900K requires to reach its all core boost clocks.

Then there’s the confusion around power limits. These CPUs quote boost clocks that are only achievable if you can deliver sufficient power and keep them sufficiently cool. Intel’s power specifications quote maximum power delivery and time periods – but there don’t appear to be any consequences for not adhering to them, breaking them, or simply not achieving them. Ultimately, when your boosting mechanisms are as complex and varied as Intels, you’re not setting a clear picture of the level of performance consumers can expect from your products.

A mid-range CPU that can exceed 100 Watts draw in an all core load poses a significant problem for motherboard manufacturers. The i5-11400 has been touted as the new value champion for gaming – but you need a motherboard to run it. It’s sold with a 65W TDP but that’s not an accurate representation of its power demands. So motherboard manufacturers want to cater to a value-conscious market but need to make a board that can potentially be fitted with any CPU from an i3 up to an i9-11900K, or more realistically perhaps an i7-11700.

ASROCK has abjectly failed to do that. The B560M HDV is plainly inadequate. It throttles an i5-11500 at base settings. It will not allow those settings to be lifted to a point that achieves full performance from the CPU. It cannot sustain an all core workload for ten minutes without the cracks showing through. It’s not acceptable.

Then we come on to the wider issues: Across the boards, we’ve sampled we’ve seen wildly different behaviour because of the power limits set and implemented by manufacturers. Credit goes to Gigabyte and Asus for manufacturing boards that can achieve the full potential of even demanding CPUs – but they’re not actually adhering to Intel’s specifications either, by allowing power limits that exceed specifications and durations that also run longer than those specifications. MSI are at least open about the need to define power limits when you set the motherboard up.

Some of these boards allow you to set your own power limits to achieve your desired result, but we don’t believe that consumers should have to do that on motherboards that are aimed squarely at the mainstream. If you’re buying a B560 board you have every right to expect it to work well with an i5 or i7 non K CPU without manually adjusting settings or understanding the detail of power delivery and limits, but some of them don’t.

So my ultimate conclusion is that if you do want to make use of an i5-11400 or any other Intel CPU and you’re considering a B560 board, it will take some research and sadly a little more money to get the most of your CPU. You can see out the linked article for the best B560 Motherboard recommendations, in tandem with the information presented in this article.