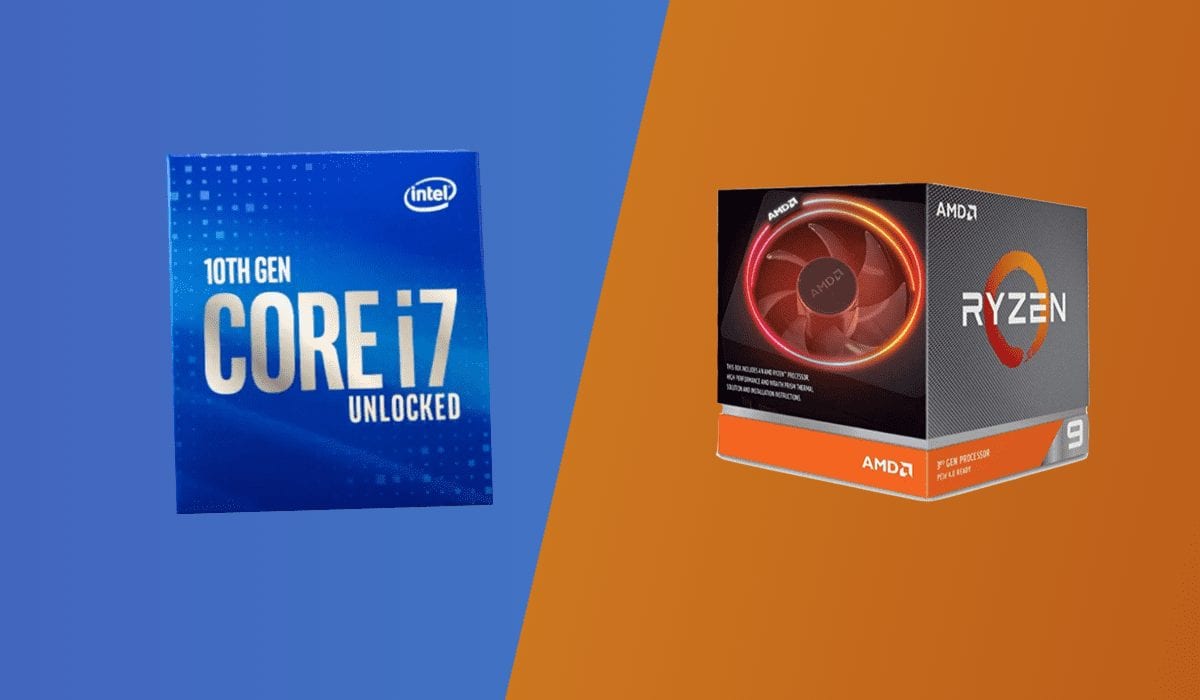 The rivalry between Intel and AMD when it comes to their CPUs has been going for what feels like forever, with new and intriguing additions to the CPU lineup appearing every year – with the most recent being Intel’s ‘Comet Lake‘ and AMD’s ‘Matisse‘ refresh.

It is basically impossible to be a fan of one or the other because which company is the best seems to change with every other release.

Two of the most recent additions to the CPU lineup, the Intel Core i7 10700K, and the AMD Ryzen 9 3900X, are dead on competing with one another, each of them seeking to claim the title of most powerful mid-to-high-end CPU.
So, how do you decide?

Here is a handy spec and performance comparison for both CPUs, to help make the decision easier.

The best way to see the differences between the two CPUs is to have all the numbers next to each other, so here are their raw specifications.

True to form, Intel offers up a pretty wildly varying level of their clock speed, from the seemingly rather low 3.8 GHz as the Intel Core i5-10700K’s base clock, but a pretty massive 5.1 GHz for its boost clock.

This makes the Intel CPU far better when it comes to raw processing speed, though it does also mean that the Intel Core i7 10700K will almost certainly tend to overheat, considering it has such a significant boost to achieve.

However, it isn’t just the clock speed that you need to look at when it comes to CPUs – there is also the matter of the CPU’s ability actually to make use of its clock speed in its cache.

The All Important L3 Cache Size:

The L3 Cache size is one of those things that most people don’t really think about when buying a CPU. Most people tend to look only at the clock speed and assume that it is.

However, if you are planning on utilizing your CPU for a variety of different functions, including video editing or graphical design, you also need to think about the L3 Cache size. This cache is what allows your CPU to store and queue data and necessary processes.

With a small L3 Cache, you can have all the fast clock speed you want, but it still won’t necessarily run everything smoothly if there are multiple processes going on.

Of course, it can still handle pretty much any game you throw at it, and likely at the highest settings if you have the relevant GPU, but it can also handle intense video editing as well.

There is one more facet that makes the Ryzen a bit of a better option for those looking to use their computer for things other than gaming: the PCIe.

PCIe is another one of those difficult to understand the qualities of a CPU, but it is actually incredibly vital to determine the final speed and efficiency of your CPU.

PCIe lanes are used by your GPU and other accessories to allow for data transfer to and from your CPU. This means that the more PCIe Lanes you have and the higher speed of those lanes, the more your other computer parts can work efficiently with your CPU.

The Ryzen 9 3900x offers the best in this regard, with 24 PCIe Lanes running at PCIe 4.0, which is almost double the speed of the Intel’s 16 lanes of PCI 3.0. For most things, you won’t really notice the difference between them, but when it comes to running graphically intense programs like animation or graphical design, you will be glad of the extra PCIe Lanes with the Ryzen 9 3900x.

Of course, all this info is only useful when you can see it actually in action – and for that, we need benchmarking.

There are innumerable websites out there that seek to compare and contrast two CPUs using real-world benchmarks. Places like CPU User Benchmark allow you to see how individual users rate the two CPUs, while at the same time giving you their performances at specific tasks.

Looking at the rankings comparing the Intel Core i7 10700K and the AMD Ryzen 3900x, opinions seem to be split about which one is better, but as always, it’s the benchmark that shows the whole picture.

Everyone prefers different games, but certain games are well known for being visually stunning and requiring a great deal of CPU effort, Battlefield V being one of them. Comparing two CPUs running the game on ultra quality at 1080p is a great way to compare any two pieces of hardware. All comparisons are made using an RTX 2080 Ti graphics card, ensuring that it is only the CPU difference that affects the final FPS.

From this chart, we can see that the Intel Core i7 10700K wins out over the Ryzen 3900, with a noticeably high average frame rate of 11 fps. It also substantially better when you consider the minimum FPS, offering up a lower threshold of 136 FPS, in comparison to the paltry 14 FPS from the Ryzen 3900X.

While the Intel is clearly superior here, it is worth noting that the actual difference between the listed FPS for the two CPUs is fundamentally negligible. While having better FPS numbers is certainly preferable, you won’t really notice any kind of difference between the two when you are actually playing the game.

While gaming is certainly one way to tell the quality of a CPU, another is in more CPU intensive processes, like video or image editing.

Adobe After Effects is a great comparison software in this regard because it is infamously CPU hungry.

Looking at the difference between the two CPUs on the chart, the Ryzen 3900 clearly wins out, offering up better processing and faster speeds by around 11%.

This is a sizeable difference, and definitely noticeable when you are working on Adobe After Effects. Though not everyone will use this program or others like it, 11% faster means that your editing will be smoother, easier, and faster.

The Final Verdict – Which CPU Should You Choose?

The fact of the matter is that both the Ryzen 9 3900x and the Intel Core i7 10700K are excellent CPUs that anyone would be happy to have.

However, the Ryzen 9 3900X is definitely the superior CPU, just in terms of its ability to work better with multiple different processes and work well with your GPU thanks to better PCIe. While the i7 would be perfectly fine as the main gaming CPU, the Ryzen simply offers up more power with other applications.

The key difference, of course, is the price. The Ryzen 9 3900x is about 30% more expensive than the Intel Core i7 10700K, possibly pushing it out of the comfortable price range of many people.

However, if you have the money to spend on a quality CPU that is able to handle innumerable processes, then the Ryzen 9 3900x is definitely the better pick.