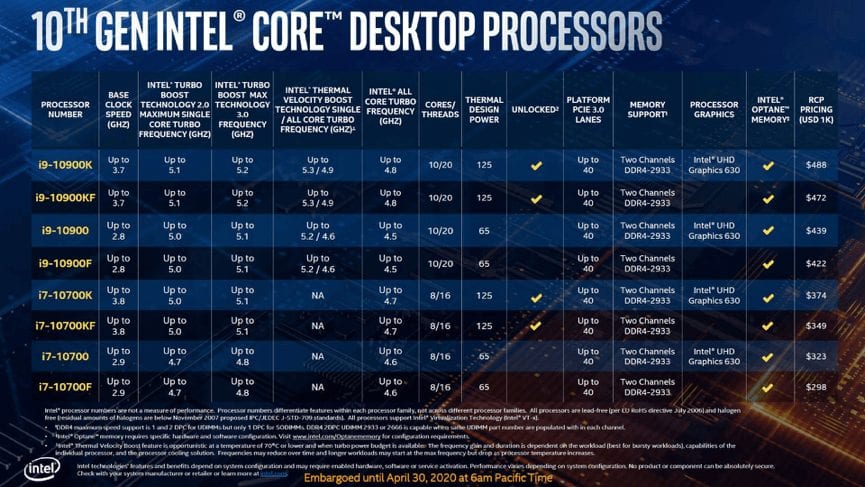 Intel’s 10th generation CPUs have been announced, with admittedly mixed reviews. Intel is finding itself in a game of catchup with AMD, in both price and specifications, as the core, and thread, counts of Intel processors lack significantly in comparison to their equivalently priced AMD counterparts.

In the 9th generation of Intel processors, hyperthreading was exclusive to the Core i9 processors, something that AMD would take advantage of with their Ryzen 5 3600 and Ryzen 7 3700X/3800X CPUs that all have multithreading capabilities.

Another spec where Intel CPUs were significantly lacking, in comparison to AMD, was the size of their L3 cache. To put this disparity into perspective, the flagship 9th gen Intel processor has a level 3 cache of 16 MB, whereas AMD’s mid-range Ryzen 5 3600 has a level 3 cache of 32 MB. Also, the lithography: Intel’s 9th generation processors would use a 14 nanometer manufacturing process, whereas AMD would once again outdo them using a 7 nanometer build technology.

Finally, another gripe with Intel processors that would push a few consumers towards the Ryzen counterparts, is the lack of PCIe Gen 4 compatibility, with Intel’s ninth generation CPUs only capable of incorporating PCIe Gen 3 lanes. This will have little to no effect for GPUs, but it will have an effect for I/O performance.

Will Intel 10th Gen ‘Comet Lake’ be able to compete with Ryzen Zen 2?

With the release of Intel’s new tenth generation CPUs, will Intel address these relevant shortcomings and offer CPUs worthy (or perhaps even greater) than those of their chief competitor?

Well… both yes and no. Mostly no.

Hyperthreading has now been added to all of the 10th generation CPUs, which is great news for gamers looking to purchase a CPU at a reasonable price that can carry them into the next generation of consoles arriving towards the end of the year. Other than that, the semiconductor technology remains at 14 nm, the L3 caches saw a 25%-33% increase in size (good but not great), and the CPUs are still not PCIe Gen 4 compatible.

Another (arguably) negative with this new generation of processors is the fact that they launch with a new LGA 1200 chipset, meaning they are not Z390 compatible, and will only work with Z490 motherboards. Considering that the new processors are not PCIe 4.0 compatible, it really doesn’t make sense that these CPUs would not be operating with Z390 motherboards, other of course than the marketing optimization for Intel and motherboard manufacturers alike.

This, however, will add yet another setback in comparison to AMD processors, which can be used on several types of older motherboard units, allowing one to upgrade their CPU without the need of purchasing a whole new motherboard. Though the Z490 will most likely be compatible with the 11th generation Intel processors, it is still up for grabs whether or not the Z490 motherboard will have PCIe 4.0 compatibility at some point.

What Intel does have going for it, though, are its high single-core speeds, which are optimal for the current generation of gaming, though multicore speeds and multithreading are becoming increasingly important as games evolves.

The overclocking speeds of Intel’s CPUs have further been increased with the 10th generation of processors, which will definitely be the fastest CPUs for gaming. Also, a couple of great new features do arrive with these new-gen CPUs, like the configurable TDP, which modifies the performance of the CPU in order to decrease the TDP and processor frequency into fixed points, which will ultimately lessen the energy consumption of the CPU for better efficiency under certain loads. Another feature is the “Intel Turbo Boost Max Technology 2.0” – though actual application of this feature is questionable. Turbo 2.0 increases processor frequency if certain conditions are met.

For Windows 10 applications, where threads are appropriated to all available cores, this will hardly work as intended. Intel Turbo Boost Max Technology 3.0, on the other hand, will boost specific binned CPU cores deemed to be the fastest, and a scheduler putting them to work first and with a frequency boost, which will most definitely be useful to those that intend to have full control in how they overclock their CPU’s cores. Furthermore, we have “Intel Thermal Velocity Boost Technology” which will allow for a boost of up to 200 MHz over the Turbo Boost 2.0, if again certain conditions are met, like if the processor is operating under a set temperature (70 degrees Celsius), and within a certain workload, power, and current.

Once again, it is yet to be seen whether this feature will be at all useful in real world scenarios. Important to mention, is that the 10th gen CPUs from Intel advertise a “thin die” with a solder thermal interface material (STIM) and a thicker integrated heat spreader (IHS), which will theoretically translate to improved thermal performance. Finally, there are some minor upgrades to the RAM support of these processors as well. The i9 and i7 processors now support DDR4 memory of 2933 MHz base speeds (with, of course, the ability to overclock beyond these frequencies), in comparison to the 9th gen equivalents supporting 2666 MHz speeds, which are now reserved for the i5 and i3 CPUs.

Together with the specifications of the aforementioned 10th gen CPUs, Intel also released RCP (Recommended Customer Prices – that took some digging to find), which represents the price of typical orders of around 1000 units, according to Intel. Depending on the actual RRP, whether or not these CPUs will be worth the price will change, especially for the i5 and i3 variants.

All-in-all, it is best to wait for recorded benchmarks to be allowed to be released and actual retail prices to be announced in order to make a full judgement, but rough comparisons between these newly announced CPUs and 9th Gen Intel processors,  as well as AMD 3rd Gen Ryzen processors, can be made for those willing to make a new build – or those wondering whether or not they should upgrade – to get an idea of how they should plan out their purchases. Stay tuned for articles comparing equivalent 10th gen, 9th gen, and AMD CPUs to better help you appropriate your budget for the right build for you.