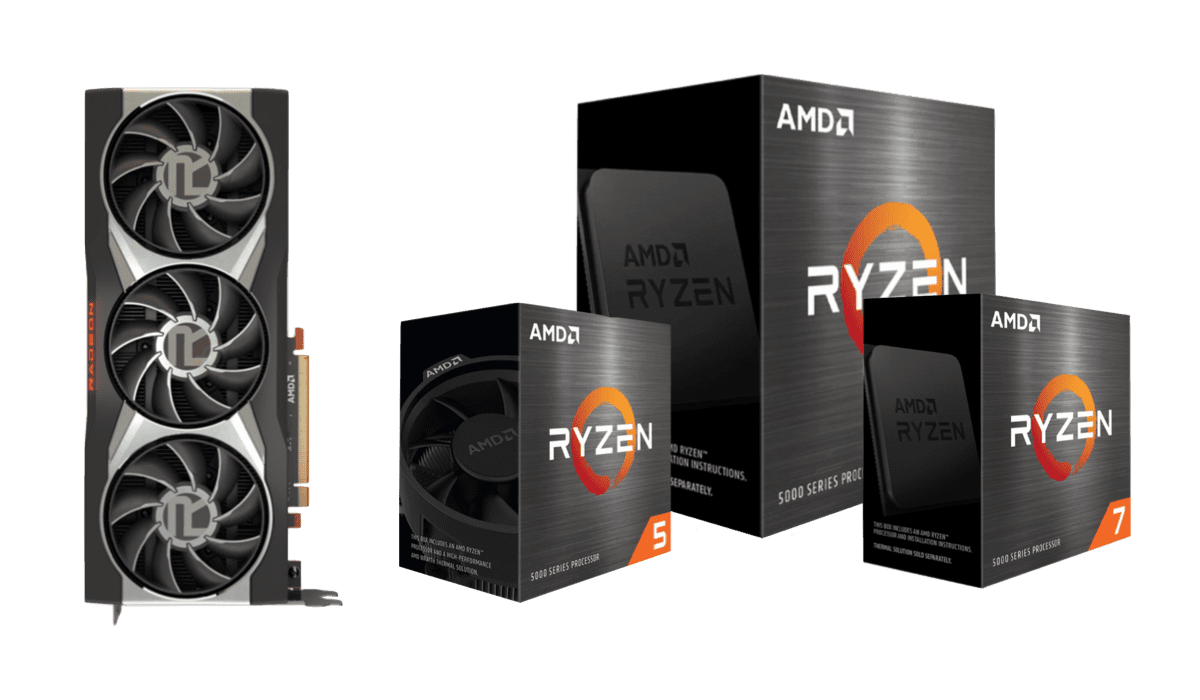 Yesterday AMD finally revealed their upcoming RDNA 2 6000 Series GPUs, making your decision whether to upgrade or build a new system this generation incredibly easy. The answer is yes, absolutely, and you should be heavily leaning towards Team Red.

While AMD’s performance claims for Big Navi still need to be vetted by real-world benchmarks, they have been utterly transparent about product performance since the release of the original Zen and RDNA architectures. Thus, it is reasonable to expect their presented figures to be accurate within a few percent, especially when pairing an RDNA 2 graphics card with a Zen 3 processor to leverage Smart Access Memory (SAM). SAM is a proprietary AMD feature that grants Zen 3 CPUs direct access to the VRAM for RDNA 2 GPUs for increased bandwidth and decreased latency. Thus, in addition to AMD’s new RAGE Mode (an automatic overclocking feature), Zen 3 and RDNA 2 combined can harness upwards of 10% more performance in games at 4K resolution! Beyond these new features centered on AMD’s dynamic duo of next-gen hardware, Zen 3 and RDNA 2, individually, offer promised generational performance improvements that are already competitive or outright better than what’s currently available from teams Green and Blue, respectively. Granted, we still have to see what Intel has up their sleeve come next year, but Zen 3 presents a guaranteed uphill battle for yet another 14nm process with 11th Gen Rocket Lake. Still, AMD is poised to dominate the GPU market this holiday season with products that have incredibly competitive performance compared to Nvidia’s Ampere cards for astonishingly competitive prices. If Team Red manages to satisfy the demand for RDNA 2 even slightly better than Team Green, who’s seriously fumbled their Ampere launch thus far, tons of people can, and should, turn to them in their hour of need.

The initial RDNA 2 lineup consists of three cards, the $580 RX 6800, the $650 RX 6800XT, and the $1000 RX 6900XT. The 6900XT is arguably the most compelling option considering its ability to trade blows with the RTX 3090 for $500 less. Even if AMD doesn’t have a sufficient answer to Nvidia’s DLSS or Ray-Tracing performance, RDNA 2 still makes more sense for all but the most affluent builders who demand the unrivaled amounts of VRAM and uncompromising raw performance, pricing be damned.

Today, we’ll be examining the best CPUs for Radeon RX 6900XT builds, with a slight caveat. Due to the inherent synergy between Zen 3 and RDNA 2, even after we get our hands on Intel’s 11th Gen processors next year, there’s no reason to buy anything other than a new Ryzen CPU alongside a new Radeon GPU, period. If you only plan to buy the 6900XT as an upgrade, simply keep whatever CPU you’ve got in your system. However, if you’re planning a complete overhaul or brand new build, a Zen 3 Ryzen CPU is the only sensible pick. Furthermore, because the 6900XT packs so much performance into a more compact and reasonably priced top-tier selection than the RTX 3090, you’ll be capable of 4K gaming with nearly any combination of parts in the rest of your build if they’ve released within even the last several years. That said, with the RX 6900XT as our GPU of choice, we’re going to detail each Ryzen 5000 Series processor and explain which use cases and budgets they’re best suited for.

“Entry-Level” might be a bit of a stretch if you’re buying a $1000 GPU, but for only $300, the Ryzen 5 5600X nets you quite a bit of CPU for a reasonable amount of money. While your processor certainly plays an integral role in FPS performance, if you’re not planning on ultra-high resolution gaming at max settings, it’s not the area where you need to break the bank. Even as modern titles begin to take advantage of multi-threaded performance, many users can honestly still get away with having only four cores and eight threads with a beefy enough GPU. So builders who don’t intend to use their PC for anything other than gaming, web-browsing, and content consumption, the six-core/twelve thread 5600X is more than adequate. You’ll still be able to leverage AMD’s Smart Access Memory and RAGE Mode with the 6900XT to enjoy top-tier gaming performance.

The 5600X also offers the lowest thermal design power (TDP) of Zen 3 with a minuscule 65W, on top of 32MB of L3 cache, and boost clocks up to 4.6GHz. The paltry 65W TDP means you don’t need the craziest motherboard or CPU cooler, which might allow you also to snag some higher-end storage and RAM. While you may not want to do any full-time creative work (photo/video editing, 3D rendering, etc.), you won’t feel bogged down should you decide to dabble. If you want to divert as much of your budget to GPU performance as possible and pick up a 6900XT, you end up sacrificing very little by opting for the 5600XT.

Based on AMD’s numbers, the 5800X actually enters the realm of high-end performance, especially when paired with the RX 6900XT. However, we still have two SKUs above this one with more, even faster cores!

For $450 ($100 less than the Core i9-10900K), the 5800X delivers eight cores, sixteen threads, 32MB of L3 cache, and boost clocks up to 4.7GHz with a 105W TDP. AMD has, incredibly, managed to keep their Ryzen TDPs at or below 105W for all of their CPUs above the 5600X, but even identical to last generation’s Zen 2 Ryzen processors. The generational improvements AMD has promised for Zen 3 without any uptick in power requirements directly translate to savings for builders, especially those upgrading from Zen 2. Suppose you’ve already purchased an adequate motherboard and CPU cooler. In that case, they will be equally as effective for the 5800X, if not more so considering the overall efficiency improvements expected to come with the Zen 3 architecture.

Equivalent performance for a significantly lower price is AMD’s motto for Zen 3 and RDNA 2. If you decide to pair the 6900XT with a 5800X, you’ll undoubtedly have one of the most potent and cost-effective combinations for top-tier gaming performance for years to come.

$550 for the 5900X in addition to the cool grand for the 6900XT firmly cements this pairing in the “enthusiast” category. When the cost of just two components equals that of many low to mid-tier builds, including peripherals, a big budget, or plenty of time spent saving, is unavoidable. However, the trade-off for your initial investment, or patient penny-pinching, is performance many gamers have been dreaming of for years.

Still, with only a 105W TDP, the 5900X sports twelve cores, 24 threads, 64MB of L3 cache, and boost clocks up to 4.8GHz to significantly bolster the 6900XT’s ability to perform at 4K resolution and virtually guarantee blazing fast 144Hz+ FPS at 1440p Max Settings. Suppose you’re also able to dedicate enough resources to high-quality, high-capacity RAM. In that case, this combination allows you to break into much more intensive creative workloads and leverage the stellar multi-threaded performance of the 5900X. Realistically, there’s not much reason to consider anything above the 5900X if your primary use case is gaming since pricing from here starts to scale exponentially rather than linearly.

To reiterate, we still need to consider whether Nvidia will rework their Ampere lineup in the face of such a compelling product stack from AMD and whether 11th Gen Intel will be able to compete in any meaningful way. However, as it stands for this holiday season, AMD is the sure-fire way to achieve ideal games performance at whatever your desired resolution is, be it 1080p, 1440p, or 4K!

While sixteen cores and thirty-two threads certainly can’t hurt your FPS performance in games, the 5950X practically demands that you spend serious time in productivity workloads, daily, and preferably for financial compensation! $800 for the 5950X sees those sixteen cores and thirty-two threads boost up to 4.9GHz while having access to 64MB of L3 cache, meaning that the only consumer-grade CPU options likely to compete will be AMD’s Zen 3 Threadripper chips due sometime in Q2 of next year.

At this stage, you should have already decided that you want to work and play at 4K resolution because the 5950X and 6900XT will demolish nearly every AAA title, except perhaps Microsoft Flight Sim 2020. Better yet, given enough RAM, no matter how high-resolution the timeline you’re scrubbing through, nor how many layers your project file has, your favorite productivity programs should run buttery-smooth as well. The 5950X is the primary reason why, despite still needing to see what they’re capable of, many of us here at PremiumBuilds doubt whether Intel will genuinely be able to compete with Zen 3 while they’re still stuck on 14nm, no matter how optimized it’s grown to be.

Merely due to AMD’s Smart Access Memory, no matter what Intel has to show come next year, it makes no sense to pair the upcoming Radeon RDNA 2 GPUs with anything other than Zen 3. Again, if you only plan on upgrading your GPU, then feel free to keep whatever you’ve got at the moment. However, if you’re at all considering moving to a new platform, and you’ve got your eye on something like the 6900XT, don’t wait. Jump on Zen 3 as soon as you can because they’re sure to be in very high demand over the holidays.