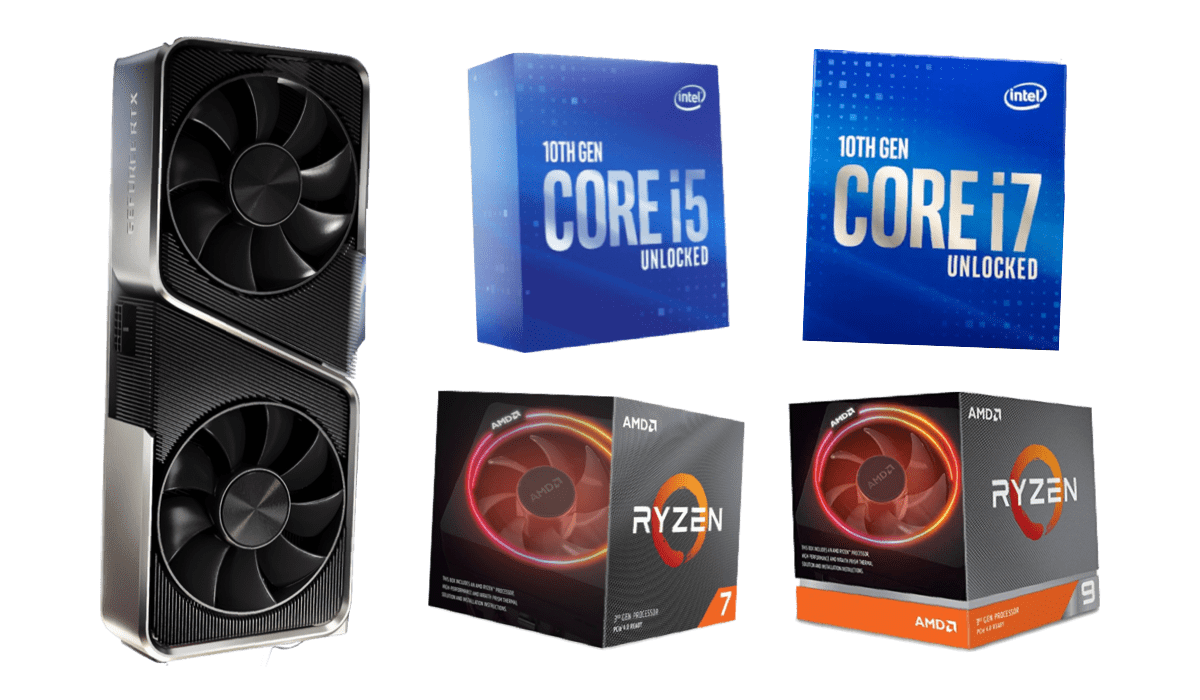 The announcement of the RTX 3070 has caused quite a stir – Nvidia claim this $499 Graphics card outperforms the outgoing $1200 RTX 2080 Ti in all areas which brings true 4K performance to its lowest ever price point. There’s a host of truly next-generation technologies on offer and graphical fidelity and frame rates are looking to take a huge step forwards with this release.

To back this performance up you’ll need a very capable CPU. In keeping with the fantastic value of the RTX 3070’s launch price we’ve selected the best bang for buck CPU’s out there to ensure you’re enjoying the full performance of the new Ampere.

With the RTX 3070 dramatically increasing potential frame rates even in graphically intense first-person shooters like COD:Warzone or Rainbow Six Seige, you need a CPU that can deliver those frame rates. The Intel i5-10600K is part of the recent Comet lake refresh and has 6 cores and hyperthreading for 12 threads in total. With a standard boost clock of 4.8 GHz this CPU performs excellently, but utilizing a Z490-chipset motherboard and lifting the core speed with a slight overclock see it rival the top of the line i9-10900K in frame rates. That’s $500 performance for around $260. Hyperthreading means frame time consistency is also good, so you’ll enjoy smooth consistent gameplay even as the game heats up. Whilst this CPU lacks PCIe 4.0 this is not essential technology for the RTX 3070: The PCIe specification is backwards compatible and since even the RTX 2080ti did not require half the bandwidth of a PCIe 3.0 x16 slot, we can be confident there is no performance detriment to using this CPU for the foreseeable future. This CPU represents the best performance you can get for $290 if you want to build a focussed high frame rate gaming rig.

If you’re concerned that the i5-10700K might not be quite enough and budget isn’t such a concern then you’ll want to look to the i7-10700K. This is the next tier up the Comet Lake CPU line-up and boasts 8 cores and 16 threads, and a slightly elevated 5.1Ghz boost clock. Again this is a ‘K’ series part indicating that it can be overclocked: Tweaking can push this CPU past it’s factory performance limits for an even bigger boost. Gaming performance is absolutely top tier and with games increasingly able to utilise core counts beyond the ‘standard’ 4 or 6 this CPU is set to last the distance. You’ll need to pair it with a mid range Z490 motherboard with solid voltage delivery circuity and a good cooler to enable it to perform to it’s potential. A good cooling solution is also required as it’s a power hungry chip: a high-end tower cooler such as the BeQuiet! Dark Rock 4, Noctua NH-D15, or Scythe Mugen 5 Rev. B, or else a 240mm or larger AIO will do the job. With a compelling blend of core count and core speed, the i7-10700K is all set to allow you to enjoy the full potential of the RTX 3070.

If you’re looking for a capable all-rounder for use in video editing, general productivity, and gaming then the Ryzen 3800X has all bases covered. This 8-core 16-thread CPU boosts to 4.5Ghz and uses AMD’s ‘Precision Boost Overdrive’ technology to lift performance as long as temperatures and voltage delivery allow. This translates to excellent gaming performance and it will be more than capable of keeping up with the RTX 3070 at high resolutions and refresh rates. For productivity work the additional 2 cores mean it outpaces the equivalently priced intel CPUs in tasks like video encoding. To further increase its value it ships with a very capable cooler, the ‘Wraith Prism’ so there’s no need to spend more on a cooling solution right away. Finally, this CPU is PCIe 4.0 enabled provided you pair it with a B550 or X570 motherboard, so you can utilise PCIe 4.0 SSD’s for extremely high transfer rates. This may be useful for content creation but they’re not necessary for a gaming and general-purpose PC where we’d recommend a more cost-effective PCIe 3.0 NVME drive. This chip comes in at around $60 cheaper than the Intel i7-10700K. It lacks the ultimate performance that gamers seeking the highest frame rates will want but is more than capable across a wide range of tasks and an excellent pairing with the RTX 3070.

Nvidia made great claims about the rendering power of the Ampere GPUs, as well as demonstrating accompanying technologies that give digital creators the tools to generate anything they can imagine in stunning 3D. If you’re looking at the RTX 3070 because of its creative capabilities then you’ll want a strong workstation CPU to partner it. The $429 AMD Ryzen 3900X is an excellent choice with 12 cores and tremendous flexibility in a wide range of workstation tasks. On release alongside its bigger brother the 3950X it set new levels in what we can expect from consumer-level CPUs. It sports a boost clock up to 4.6Ghz meaning it’s equally adept at gaming when you get some down time. In terms of content creation it’s the best value option and will allow you to create and render your products with new found levels of speed and efficiency. It is fully compatible with the great value B550 and X570 motherboards meaning you don’t have to incur the expense of threadripper platforms to gain access to PCIe 4.0 SSD’s and high PCIe lane counts. If you’re looking to build a content creation system with unparalleled value the Ryzen 3900X paired with an RTX 3070 should be your starting point.