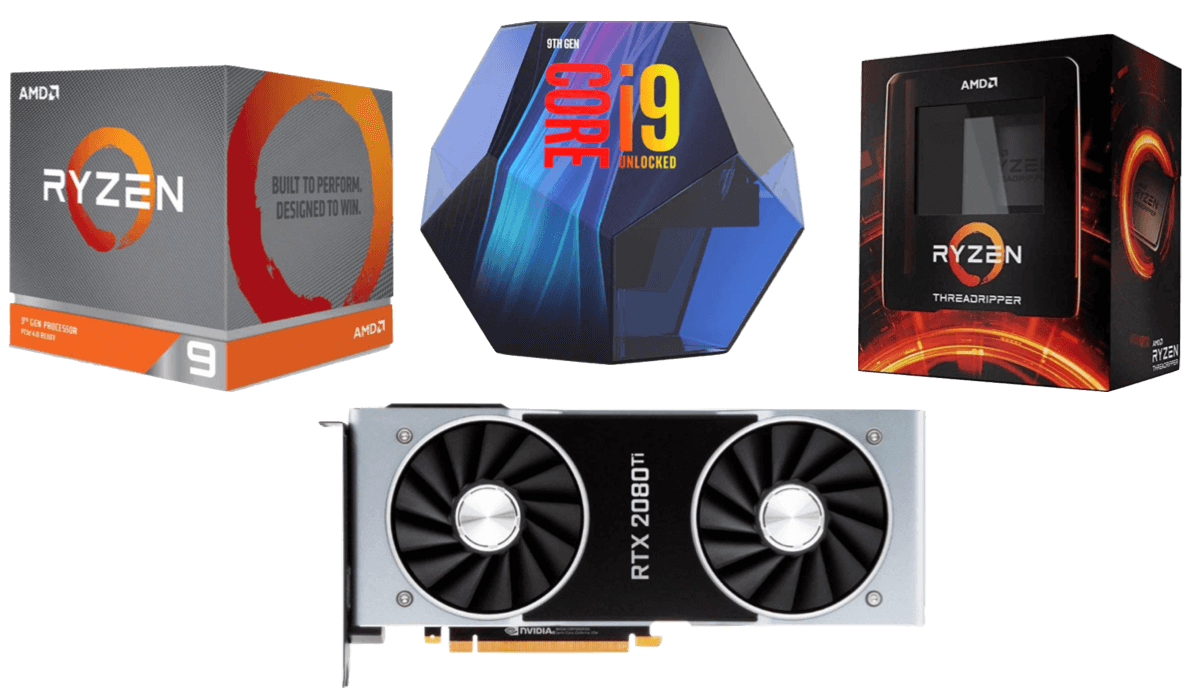 Still the king over all commercial graphic processing units, the Nvidia RTX 2080 Ti reigns supreme. This flagship RTX GPU has 11 GB of DDR6 VRAM, up to 14 Gbps of memory speeds, and a 352-bit memory interface width; rendering it capable of producing graphical feats that other GPUs can only marvel at the sight of. For a gaming computer, this graphics card is guaranteed to futureproof your build into the next generations of consoles and beyond, as proven by the specifications released by both Sony and Microsoft for the Playstation 5 and Xbox Series X respectively. As for workstations, handling editing or rendering tasks with 4K resolutions are more than possible with the power of the RTX 2080 Ti.

But this all depends on the synergy between the GPU and the other hardware of the PC build. If the GPU is bottlenecking, one can simply turn down the graphical output and fix the issue, but if the CPU is bottlenecking, then there is a problem.  To prevent such throttling, you are going to need a CPU powerful enough to handle the RTX 2080 Ti for the intended use of your computer. The RTX 2080 Ti costs upwards of $1100, so maximizing this investment should be a top priority when assembling the hardware for your setup.

To assist in this matter, we’ve made a list of the best CPUs available for different intended uses of the RTX 2080 Ti. Note, that for gaming setups 16 GB of RAM is a minimum, and proper cooling will be essential. For workstations, 32 GB of RAM should be the minimum, and once again adequate cooling is essential for overclocking your CPU to handle any high-load applications.

On that note, here are the best CPUs for workstations, gaming setups, and hybrid PC builds looking for the best price-to-value ratio for their CPU to pair with the Nvidia GeForce RTX 2080 Ti.

Though the Ryzen Threadripper 3990X was chosen, as it is the most powerful of all desktop processors available, any Ryzen Threadripper of the 3000 series can be placed here depending on the level of workstation that you are looking to build.

This CPU is a beast. It has a colossal 64 cores and 128 threads with an equally massive L3 cache of 256 MB. As all third-generation Zen2 processors, the Ryzen Threadrippers also features a 7nm structure and is PCIe 4.0 compatible; which, for workstations, is extremely important since PCIe 4.0 SSDs have much faster-sustained reading and writing speeds than previous generation PCIe 3.0 SSDs. Additionally, the Ryzen Threadripper 3990X has an unparalleled total of 64 PCIe lanes, so multiple RTX 2080 Tis can be used in unison with this CPU. In terms of maximum memory capacity, it can hold up to 1TB of DDR4 RAM with a max memory bandwidth of 95.36 GB/s on 4 memory channels, so it is more so a question of how much the motherboard can hold, rather than what the CPU can support. Finally, it must be mentioned that this CPU operates on a 280W TDP, so cooling will be paramount in the case that is to holster this CPU.

The price of this processor is quite high, currently selling for $3749, with the 3960X going for a more modest $1399, so depending on the workstation and budget you are looking for, there are available options in the Threadripper category to choose from. A must for a serious professional media processing PC with one, or multiple, Nvidia GeForce RTX 2080 Ti(s).

If you’re looking for a dedicated gaming build, there is nothing better than the Intel i9-9900KS, especially for its price. With 8 cores and 16 threads, this CPU features a 14 nm structure with an operating frequency of 3.6 GHz, and an extremely impressive max turbo frequency of 5.0 GHz. Additionally, the 9th Generation i9-9900K has an L3 Cache of 16MB and is PCIe 3.0 compatible (16 lanes), and thus will unfortunately not support PCIe 4.0 SSDs – though this will have negligible effects for gaming, as PCIe 3.0 SSDs will more than suffice for gaming according to Techspot’s PCIe 3.0 vs 4.0 benchmarks.

The main reason that this processor has been chosen for gaming setups versus similar AMD options, is the fact that it avoids any throttling and bottlenecking issues that are inherent in equivalent AMD processors, like the Ryzen 7 3700X which may inhibit the ability of the Nvidia RTX 2080 Ti to perform to its maximum capacity, though strictly in regards to gaming applications. The fact that it can also overclock to extremely high processing speeds for its available cores makes it even more valuable in regards to current, or even next-gen, gaming benchmarks, as games are currently only using up to 6 cores and up to 12 threads of a CPU, and up to 8 cores and 16 threads in the future of next-gen games.

The Intel i9-9900K is currently being sold for $479, so if you’re looking to have a processor accompany you for several years of gaming to come, this processor is a safe bet and a great deal to pair the Nvidia GeForce RTX 2080 Ti with.

The Ryzen 9 3950X is the cream of the crop in the current CPU batch in terms of raw processing power to price ratio. With a massive 16 core and 32 thread processing, this AM4 Zen2 7nm architecture CPU can handle even the most demanding of tasks with ease. Though AMD does market it for gamers, this CPU is more so optimized for workstations, as its multi-core and multi-thread speeds are unrivaled for desktop setups. That being said, of course it will work optimally for gaming as well – more so if streaming is involved – so if you are looking to game and work on the same device, this CPU will provide maximum value; though it must be said that even for next-generation consoles, this processor is quite over-kill if it is to be used strictly for gaming. In terms of desktop applications, with the Ryzen 9 3950X’s base operating frequency of 3.5 GHz and a massive L3 Cache of 64MB, it can operate multitasking procedures with ease.

Another factor to be taken into account is the fact that the Ryzen 9 3950X is compatible with PCIe 4.0 (16 lanes), meaning that other than just the RTX 2080 Ti, it can also be paired with the new generation of M.2 NVMe SSDs.

If you’re looking for a great, overall CPU that won’t sell your Nvidia GeForce RTX 2080 Ti short, then the Ryzen 9 3950X is the way to go. You can currently find this CPU for $749 which is not cheap, but definitely worth the cost if you are looking to pair content creation or editing, together with high-end gaming.