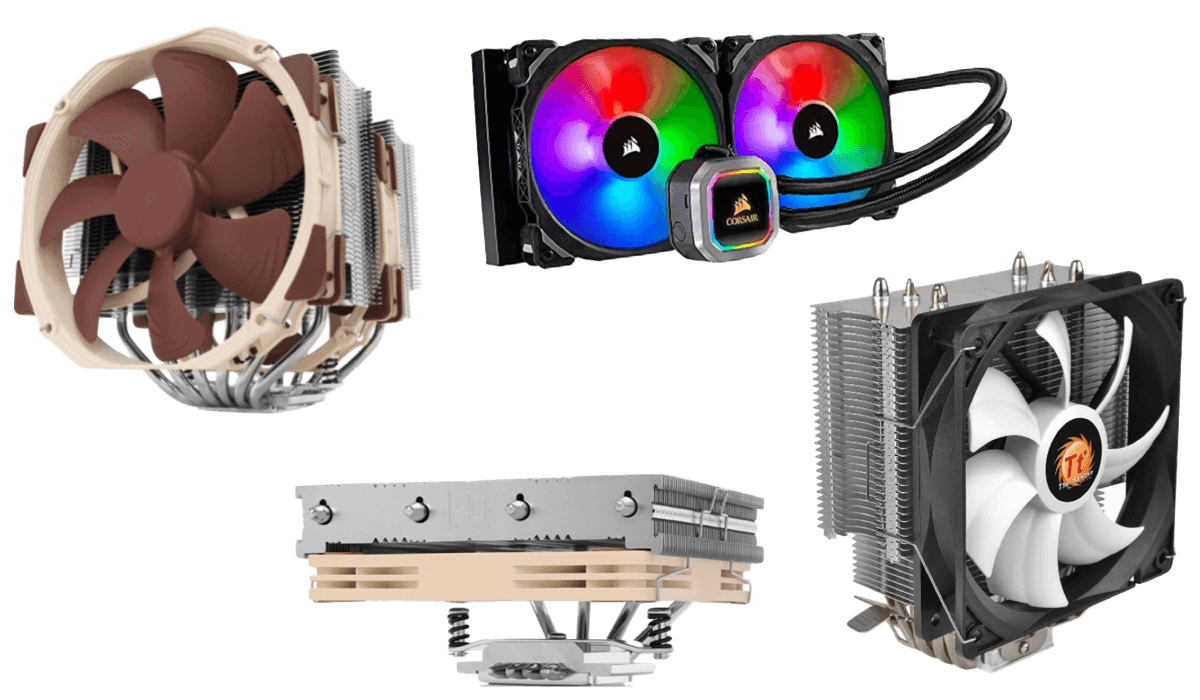 Whether you’re in a studio and don’t want to be hearing several loud computers running at the same time, or just generally hate that constant buzzing noise emanating from your PC, there are several solid options for near-silent, yet still effective, CPU coolers for building that ultra-quiet PC.

If you’re looking to use the stock coolers from AMD, like the Wraith Stealth or Wraith Prism, then according to Tom’s Hardware you’re going to have to expect noise levels upwards of 38 dB, which is quite significant. Though the current AMD stock coolers can work for stock speeds at mid-to-high loads, the noise levels are considerably louder than some of the available options for CPU coolers; even on a budget. Of course, currently, most Intel processors lack any type of stock cooler, so you will need one no to purchase one anyway, you might as well invest in a silent one.

It is important to note, that though CPU coolers may not seem like high-priority components for PC builds – coolers, fans, and cases carry the most value to investment ratio, as they can be used no matter how many times you upgrade your hardware components. CPUs come and go, but the cooler can be there to stay.

In this article, we will present you with a range of CPU coolers that provide great cooling solutions at low noise-levels for different setups. Whether you’re looking for a cooler to fit in your SFF case, or whether you prefer AIO or air cooling, or if you’re just looking for something on a budget, we’ve found the best low-noise options to suit your needs.

Searching for a quiet CPU cooler, but don’t want to allocate too much of your budget for cooling? If you are not going to be overclocking your CPU enough to warrant a high-end cooler, then Thermaltake’s Contac Silent 12 is a great option for 2020.

The Contac Silent 12 features a 120mm PWM controlled fan with hydraulic bearings, and even comes with a “low-noise cable” which throttles the speed of the fan to operate at 400-1100 RPM in order to reduce the maximum amount of noise the cooler can output. This fan is situated on an aluminum heatsink which features four solid copper, direct contact, heatpipes for better heat dissipation. According to tests ran be Techreport, this cooler will run at noise levels of 27.7 to 31.5 dB during operation, and therefore will barely be noticeable. If you would be willing to sacrifice fan speed further, the low-noise cable can decrease these noise readings to 26.3-29.1 dB during mid-to-high loads. The difference in temperature will be noticeable if the cooler is running with the cable, as there can be increases of a minimum of 2-3 degrees Celsius. That being said, if you don’t plan on running hardware-intensive programs or overclocking your CPU, this cooler is a great option to minimize the noise emanating from your device.

Considering its performance and noise levels, and the fact that you can currently find this cooler for under $30 (and have it be compatible with both AMD and Intel CPUs) it is a great purchase to make for entry-level to mid-end setups.

If you’re looking for a silent, low-profile CPU cooler for your SFF build, then there’s nothing better than the NH-L12S. Not only is this cooler the quietest low-profile option, but it also has the best low-profile, stand-alone, performance option available.

To regulate the noise it emits, this cooler uses a Low-Noise adaptor, which automates the speeds that the fan runs depending on the processor loads. This way, at low-loads, the NH-L12S only outputs 21.4 dB, which is almost inaudible from a foot away.

It is well known that Noctua produces some of the highest quality case-fans, and the one used here is the NF-A12x15 slim, 120mm case fan. This fan can either be mounted on top or below, the fin stack in order to match the airflow direction of the case that it will be installed in.

Benchmarks ran by Optimum Tech show us that out of all low-profile CPU coolers they tested, the NH-L12S ran at the lowest temperatures (even when overclocking an i7-8700K at 4.8 GHz and 95W TDP), and at the lowest noise-levels, only slightly being outperformed by the previous, NH-L12, model by 0.5dB. A key factor in the cooling performance of this model is Noctua’s top of the line NT-H1 thermal compound that is included within the package.

Currently, you can find Noctua’s NH-L12S for only $49, and considering that this includes price a six-year warranty, it is a great deal for a low-profile, high-performance cooler – devoid of excess noise emission.

For enthusiast-level gaming setups, you’re going to want an AIO CPU cooler with the maximum level of RGB bling, and the Corsair H115i RGB Platinum is the quietest option you will find without having to sacrifice too much in regards to actual cooling performance.

This CPU cooler features two of Corsair’s ML PRO Series 140mm magnetic-levitation RGB, PWM enabled, fans, which deliver an airflow of 97 CFM each and have fans speeds of up to 2000 RPM. Now, despite the impressive max RPMs of these fans, if you are looking to have this cooler run silently, you will want to run it at either Quiet or Balanced mode, as running it at 100% will make it reach much higher noise-levels than you’d normally want.

The good news is, that even when overclocking, the difference between Extreme mode, versus Quiet or Balanced, ranges only at 1.75-3.75 degrees Celsius in temperature differentials. According to TweakTown, at Quiet, or Balanced, the CPU did not exceed 55.75 degrees on an Intel Core i7-6700K (95W TDP) processor. While on these modes, the sound levels did not exceed 28 dB on normal operations, and 31 dB while overclocking the CPU. The pump itself features a thermally optimized cold plate as well as low-noise design, so as long as it isn’t running at its peak levels it will be a non-factor in terms of noise.

To complement its performance, the Corsair H115i Platinum comes with plenty of style. Each fan, as well as the pump head, have 16 individually controlled RGB LEDs that are all customizable via Corsair’s iCue software.

All this style does come at a price, as the cooler currently sells for $169, but it will keep your CPU cool, your noise levels low, and will offer a light show worthy of an enthusiast-level gaming build.

Like the low-profile Noctua CPU cooler, the Noctua NH-D15 isn’t only the quietest CPU cooler, but arguably also the best performance air-cooler available in the market. It comes with two top-performance 140mm NF-A15 fans which include Noctua’s Low-Noise adaptors and PWM support. The cooler itself features a six-heatpipe design which allows for a larger surface area for better heat distribution, and heat dissipation, of the CPU. Pairing the cooling of the NF-A15 fans and the premium design and materials of this cooler together with Noctua’s NT-H1 compound, makes the NH-D15 the best cooler on the market, with a performance that rivals much louder AIO coolers which sell for more than double its price.

In regards to the noise cancellation, there are many factors that allow the NH-D15 to be considered the quietest CPU cooler available. Firstly, the NF-A15 fans have advanced acoustic optimization frames, as well as anti-vibration mounts and SSO2 magnetic bearings, allowing for an overall near-silent operation of the dual fans included with the cooler. Together with the aforementioned low-noise adaptor and PWM controls, the cooler was tested by TweakTown to run at only 24dB at 7.5V, or 1100 RPM, being the most silent of all 27 coolers they tested.

You can currently find the Noctua NH-D15 for $89, which may seem steep for a CPU cooler, but for the quality, performance, and future-proofing this will provide, it is well worth the cost.