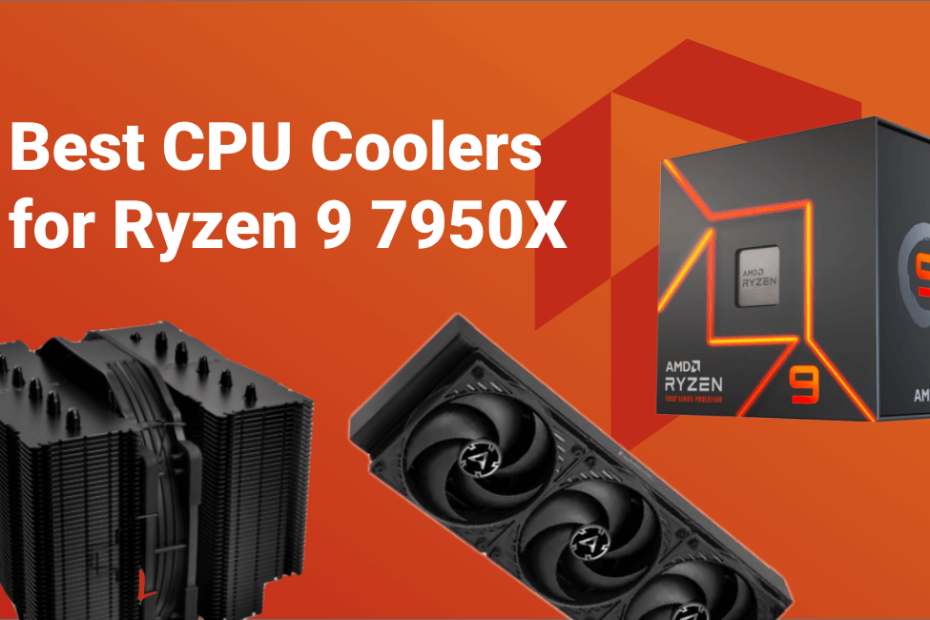 AMD’s latest Zen 4 chipsets are finally here – with their flagship model, the Rzyen 9 7950X, being marketed as the ‘fastest’ desktop processor for 2023. Whilst being fast, this new Zen 4 generation really runs hot, with a reported operating temperature of 95 degrees under load. With a raised 230W TDP from 170W of the Zen 3 line, AMD now recommends to cool this flagship Zen 4 processor, you’re going to need a beefy cooler to dissipate all of that heat, and a liquid one at that – with a 240mm AIO cooler being the minimum official recommendation for the Ryzen 9 7950X. Going for a better cooler you necessarily won’t get better temperatures with this Zen 4 processor, but you can squeeze more performance out of it.

Having had time since their release to analyse and understand the thermal performance of the Ryzen 9 7950X, we are able to offer you our recommended CPU coolers to pair with the 7950X, and which coolers to avoid! Our selections will include the best AIO cooler, 240mm cooler, 360mm cooler and 420mm cooler for the Ryzen 9 7950X.

Before we begin, I would like to note that although the official recommendation is a minimum of a 240mm AIO, we will offer an Air-cooled CPU cooler pairing for the 7950X for those who don’t want to run a AIO system. However, when possible, we recommend going for a liquid cooler for the Ryzen 9 7950X for 2023.

Before we go into our AIO recommendation for the Ryzen 9 7950X – it is worth considering which size AIO you would fit your requirements and demands out of your 7950X system – as the different AIO sizes offer different benefits and drawbacks. If you’re looking for maximum performance but don’t mind a higher noise output, go for the 420mm AIO for the 7950X. If you are looking for the overall best performance-to-size ratio and relatively quiet operation – opt for the 280mm size – this has 90% the surface area of the 360mm AIO size and utilises 140mm fans rather than 120mm fans you see in 240mm and 360mm AIOs. If you’re looking to build an ITX system with the Ryzen 9 7950X, then a high performance 240mm AIO cooler will be your best bet. There is a great amount of useful discussion and advise on /r/BuildAPC on Reddit we would recommend checking out on this topic, too.

Whether we’re recommending a 240mm, 280mm, 360mm or 420mm AIO for the Ryzen 9 7950X, our answer for the best AIO to pair with this CPU will always the be same – go for the Arctic Liquid Freezer II series. The Arctic Freezer II is hands down the best CPU cooler for the Ryzen 9 7950X thanks to its best-in-class thermal performance and competitive price – making it a no brainer for any builder. It does feature a no-thrills design which is optimised for cooling performance, but if you are looking for something a bit more blingy, then go for the ARGB version of the Liquid Freezer II – it will make for a great aesthetic Zen 4 build with impressive performance. As mentioned above, its worth considering the AIO size for the 7950X based on your personal needs and how much performance you want to squeeze out in sacrifice for noise and case size – but we think the best AIO size for the Liquid Freezer II is the 280mm or 360mm option.

If you’re not wanting to put an AIO cooler in your new Ryzen 9 7950X system, despite AMD’s official recommendation of using a 240mm AIO or above, then you’ll be relieved to hear that there are some air coolers that will be sufficient for pairing with the Ryzen 9 7950X. Techpowerup posted an informative article outlining that a decent air cooler will offer enough performance for the Ryzen 9 7950X. As mentioned in many of our other part recommendation articles, by far the best air cooler and the best tower cooler for the Ryzen 9 7950X is the Noctua NH-D15 chromax.black. This best-in-class cooler from Noctua offers the best cooling performance of any tower cooler on the market, at a competitive price and a sleek all-black design. If you’re looking to game with the 7950X, the NH-D15 would be perfect – but for any intensive workloads you might be better off with an AIO instead for the 7950X, this is because you may gain up to 3% in clock speeds using an AIO vs the NH-D15.