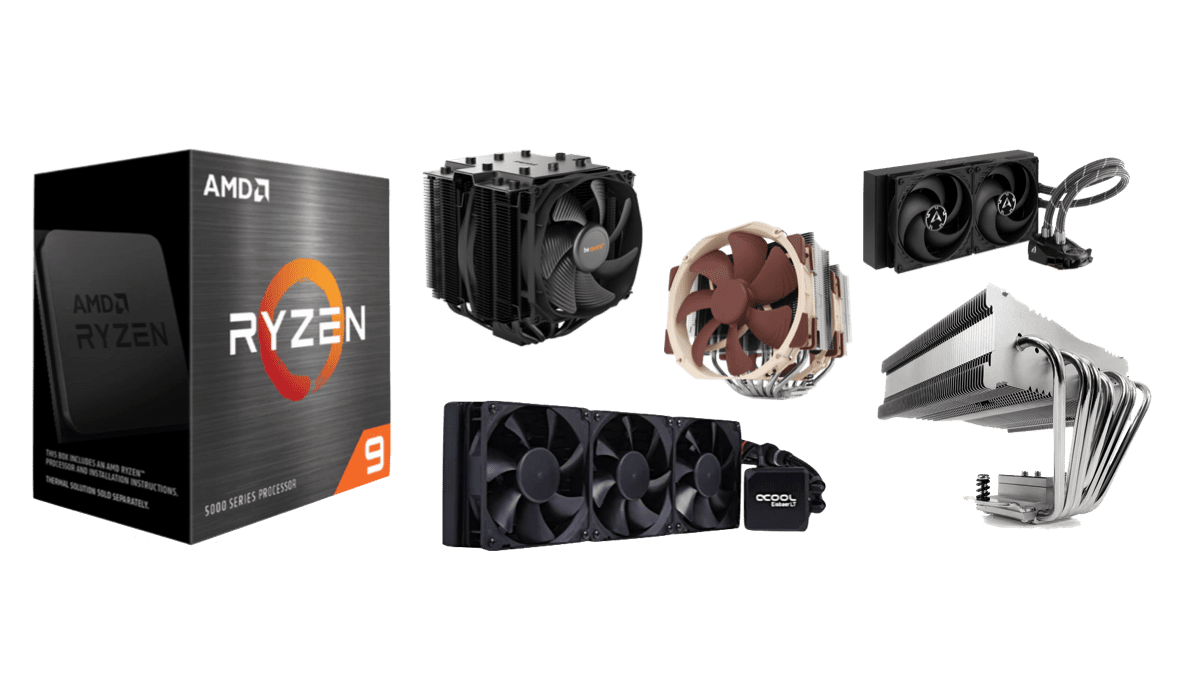 AMD has announced the new Zen 3 CPUs and at the top of the tree sit the Ryzen 5900X, which they tout as their high-performance Gaming CPU, and the 5950X which with 16 cores is the ultimate consumer productivity CPU.

In this article we’ll recommend the best CPU coolers to ensure that these two CPUs – the Ryzen 9 5900X and 5950X – perform at their absolute best.

What kind of cooling do these Zen 3 CPUs need?

Zen 3 is a continuation and refinement of the Zen Architecture and will be based on TSMC’s 7nm process. One of the key features of Zen CPU’s is their power efficiency, and doing more with less wattage means that despite their incredible performance they’re not excessively hard to cool. Combined with AMD’s continued support of the AM4 Processor socket, there’s already a wealth of coolers capable of keeping temperatures and noise to a minimum. Lower temperatures allow the CPUs to boost to higher frequencies and sustain them for longer, ultimately increasing the amount of work they can do. The Ryzen 5900X and 5950X both have stated ‘TDP’ or Thermal Design Power of 105W, indicating the sustained power that they are designed to handle. This is, therefore, a bare minimum for the cooling capacity of any cooling solution and a cooler should be able to dissipate much more heat than this to keep temperatures as low as possible. A more capable cooler also means less fan noise since it won’t be struggling to dump the CPUs heat to the atmosphere. Thermal headroom also allows for overclocking meaning you can get the absolute best from your CPU. AMD don’t supply cooling solutions with either of these processors so you’ll have to find an option that meets your needs and budget. We’ll look at Tower coolers which use heat pipes to draw heat out of the CPU and dissipate it via fin stacks – these coolers tend to be ultra-reliable and can be very quiet as well. There are also ‘All in one’ (AIO) water cooling solutions which combine a pump usually in the cold plate on the CPU, a radiator, and fluid sealed within that is circulated to move heat away from the CPU. These coolers have more parts to potentially fail but they are ultimately very reliable as well, and can use a large radiator to dissipate even more heat than even the largest tower coolers.

The BeQuiet Dark Rock Pro 4 combines sleek black looks with the cooling capacity of a twin fan cooling design. A pair of 135mm fans drive air through the fin stacks to deliver maximum cooling with minimal noise. Rubber dampeners, low RPM high airflow fans, and shaped fins that channel the air allow this cooler to operate virtually silently even under load. Fitting isn’t the simplest owing to the coolers bulk but the supplied fitting kit including a long reach screwdriver makes the job possible. You also need to check RAM height carefully as the front fan overlaps ram taller than 40mm. This cooler boasts exceptional 250W Cooling capacity and whisper-quiet operation. There’s a 3-year warranty for your peace of mind, but with dual fan redundancy and no other moving parts, this cooler will see years of trouble-free operation.

Noctua has been industry leaders in their fan and cooler designs for a long time now, and with the attention to detail, they demonstrate with their products it’s easy to see why. This large tower cooler, the Noctua NH-D15 uses a pair of fans nestled into two separate fin stacks and this affords the NH-D15 a 220W TDP rating comfortably above the requirements of the Zen 3 CPUs. Its reliability is ensured with a 6-year warranty, whilst the redundant dual-fan designs mean that if a single fan should fail the cooler still operates, meaning your system isn’t down until you can get a replacement. This cooler provides the ultimate cooling for a system in heavy use and performing demanding workloads over extended periods, the kind of workloads the Ryzen 5950X excels in. If you’re not sold on the Noctua Beige and Brown, there also the ‘Chromax’ version in black.

When cooling CPUs of such high power and capability, ‘low profile’ is of course relative. All of the popular options such as the Cryorig C7 or Noctua NH-L9x65 SE-AM4 fall short in cooling capacity for these CPUs, and whilst it’s tempting to fit ever more powerful processors into ever-smaller cases you do have to give due consideration to heat loading. The Noctua NH-C14S, our pick for this category, is a unique design using six heat pipes and a 140mm fan to lower the overall cooler height to just 115mm. This opens up a wide variety of cases with reduced space over the CPU. Another advantage of the horizontal fan orientation is that the outwashed air helps cool VRMs, RAM and other components on the motherboard. The fin stack is offset to provide clearance for the GPU in the standard PCIe Slot. This isn’t a ‘fit and forget’ cooler, you’ll need to give careful consideration to case layout, RAM height and configuration of the GPU if you do choose this cooler. For a cooling solution with lower space requirements than almost any other option, it gets our recommendation.

If your case and layout lends itself best to a 360mm AIO, this unit from Alphacool, the Eisbaer LT360, gets our recommendation. It’s not just a traditional closed loop cooler. Alphacool see this as the first step to a more comprehensive liquid cooling solutions. Whilst it can simply be installed right out of the box, it includes standardised fittings that allow you to open up the loop and add more components. This means that you can add more radiators or a GPU cooling block as your system and demands grow over time. The pump is an ultra low noise unit with insulation to dampen noise and vibration and the square pump head also contains the reservoir, which has a window so you can see that it’s properly filled and operating correctly. The polished copper cold plate is optimal for heat transfer. Meanwhile, the 360mm radiator provides unsurpassed surface area for the dissipation of heat, and Alphacool supply 3 120mm fans with the unit. Looks-wise there’s a discreetly lit ‘Alphacool’ logo and functional looking pipework. Given the upgradeability of this system, and it’s excellent cooling capacity we consider it the best 360mm option for cooling the Ryzen 5900X or 5950X.  If you’re looking for a little more show, there’s also an RGB version with Aphacools own RGB fans – the Aurora 360 for $30 more.

The Liquid Freezer II 280mm all-in-one from Arctic has a couple of features that make it especially suited to cooling the Zen 3 CPU’s. First it’s unique in that arctic have provided a small fan in the cold plate to move air over the Power stages of the motherboard. This feature addresses one of the concerns of AIO’s in that they don’t move much air over the VRMs, so they run hotter. With the Zen 3 CPU’s being adept at continuous workloads like rendering, cooling the VRMs becomes a concern. Arctic claim that the VRM fan cools VRMs by up to 15°C, but it can be deactivated if you don’t feel it’s necessary and wish to reduce noise.  It also has a PWM Pump leading to minimal noise and vibration, designed by Arctic rather than bought off the shelf – most other AIOs use pumps manufactured by Asetek. There are also long hoses so it will fit into larger cases. It uses Arctics own PWM ‘P-fans’ which have high static pressure to push air through the radiators, and operate with low noise. Overall this 280mm AIO is a great option for reliable comprehensive cooling of these new top tier CPUs from AMD.