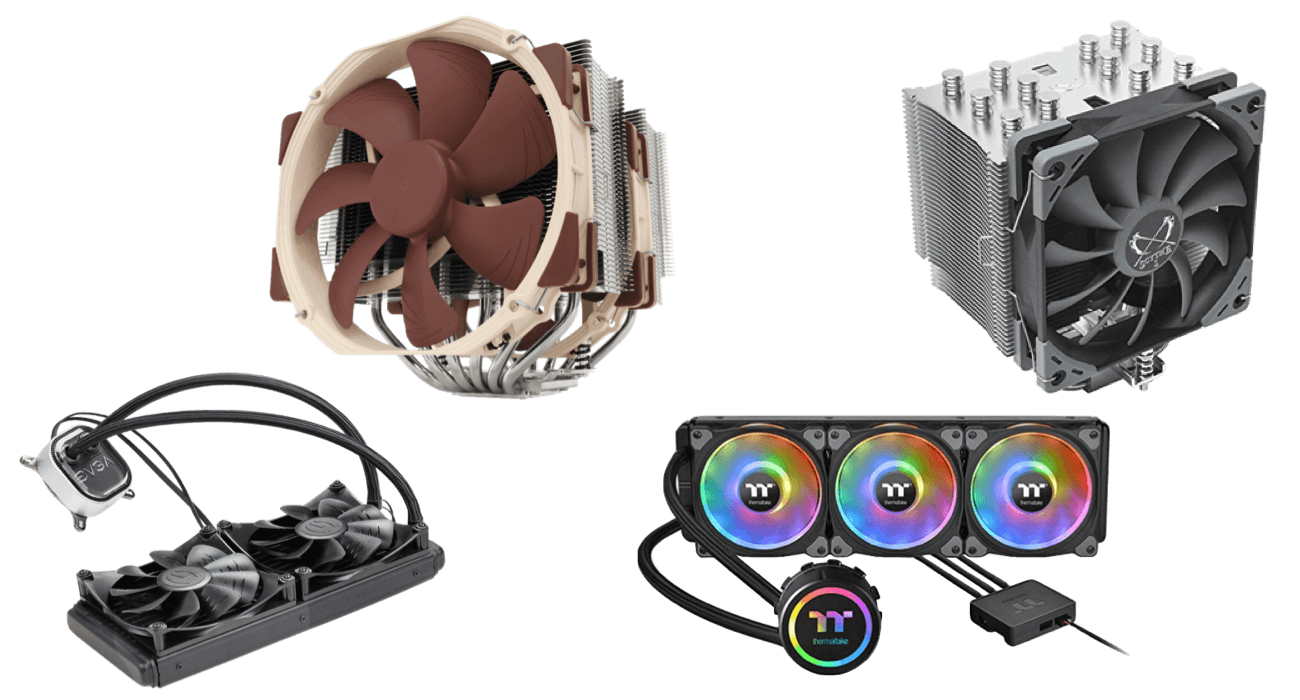 The flagship Ryzen 3000 processor has finally been released, and boy is it a beast. The Ryzen 9 3950x, the top of the line Zen2 processor that was promised as the peak of the 7nm AMD implementation but released months after the rest of the lineup, has finally hit shelves. And it is making waves! The 16 core/32 thread monster is a pioneer for mainstream desktop computing, offering more threads and cores than many HEDT processors. The price is high at around $750, but the power and parallel computing ability is unheard of at that price and for a mainstream socket.

But if you are thinking of using this new king of the Ryzen processors for your rig, you are going to need a motherboard and cooling solution to match. The 3950x has a nominal TDP of 105W, without any overclocking, so it needs good power management and cooling if you want to get the most out of it. We are going to cover motherboards in a next article, but this guide will help you choose the CPU cooler that’s best for your new 3950x.

As a reminder, most cooling solutions fall into one of three categories: air coolers (using heatsinks and fans), AIOs (enclosed liquid loops using a radiator, pump, and fans), and custom liquid loops (using some combination of reservoirs, pumps, cooling blocks, and radiators). The last one, custom liquid loops, are too specific for general recommendations to work, so we are not going to cover them, even though many 3950x users are enthusiasts and may consider a custom loop. For the other two categories however, we have great recommendations at both the budget and high-end level. We are looking for a balance of reliability, performance, noise, and aesthetics that give the best possible option to keep the 3950x cool.

With those criteria in mind, these are our recommendations for best CPU coolers for the Ryzen 9 3950x:

If you are trying to cool on a budget, air coolers are always the way to go. In terms of price-performance, nothing will work quite as well as a reasonably priced air CPU cooler, even for something like the 3950x. Now, given the 105W TDP of the 3950x, we would not encourage doing any major overclocking on a budget air cooler, but you should be very comfortable that your CPU will perform as expected at stock settings and handle light overclocks. And if you have to pick one budget air CPU cooler, we recommend focusing on pure price-performance and picking up the stellar Scythe Mugen 5 Rev.B.

Scythe is a lesser-known mainstream manufacturer, but very well known in the enthusiast community for their high quality products. They have full lineup of air coolers, including low profile or ‘silent’ offerings, but none match the pure cooling performance of the Mugen 5. With six heat pipes, the heatsink is beefy but those same heat pipes are what make the cooler so effective. Even with only the one included fan (you can add a second in a push/pull config), the Mugen 5 is able to effectively cool high TDP processors (including light overclocks). The aesthetics are nothing special (no RGB and plain fan/heatsink), but it is also not bad and when combined with the great reliability and massive cooling performance, explains why we love this cooler.

Now, even though this is our budget category recommendation, this is not the cheapest cooler. There are even cheaper options that are pretty good like the Hyper 212 EVO from CoolerMaster, but if you are spending upwards of $700 on the CPU, we think you can at least pay for the $50 for the Mugen 5. That extra few bucks will give you a huge gain in performance and quality, easily worth it in our opinion. And even when compared to our high-end offering, which is almost twice as expensive, the Mugen 5 easily holds its own. With all of this in mind, it’s easy to see why the Sycthe Mugen 5 Rev.B is our choice for best budget air CPU cooler for the 3950x.

While the Mugen 5 offers perhaps the best pure bang-for-your-buck, if you are spending the money for a 3950x, you can probably afford to spend a little bit more and get the best of the best. While you might not see anything like double the cooling performance, a high-end air CPU cooler will be allow the 3950x to fully stretch its legs, and even overclock moderately to achieve further performance gains. High-end air CPU coolers might not hit the pure performance of the highest-end AIOs, or definitely not of a custom liquid loop, but they are often a match for budget AIOs at a more reasonable price and without the risk of liquid leaks or pump failures. So to match our king of AMD mainstream processors, we recommend the king of air CPU coolers, the Noctua DH-15, for the best air CPU cooler for the Ryzen 9 3950X.

We’ve talked about Noctua before, and even mentioned the Noctua DH-15 in passing, but it is hard to over-estimate just how well loved and respected this cooler is in the PC building community. In all sorts of reviews from the biggest YouTubers out there, the DH-15 continues to punch above its weight and offer fantastic cooling for even the hottest of rigs. Other than its massive size, it is almost flawless. We say almost flawless because the DH-15 still features the other Noctua trademark aside from its killer performance: the very interesting brown/beige color scheme of its fans. But now that you have the chance to use the chromax.Black fans, even the aesthetics shouldn’t hold you back. The dual-fan, dual-heatsink, six heat pipe setup is simply phenomenal. It’s so good I’ll say it again: the dual-fan, dual-heatsink, six heat pipe setup is simply phenomenal. And when combined with the legendary Noctua NF-A15 fans…well, it’s easy to see why the DH-15 can keep even an overclocked 3950x cool.

So if you have $90, which is amazingly reasonable for how much performance you are getting, and do not want an AIO for whatever reason (including the fact that even a good budget AIO will cost around the same amount), the Noctua DH-15 is an easy winner for best high-end air CPU cooler for the 3950x (or any other CPU!).

While the Noctua DH-15 will cool as well or better than many of the options in the budget AIO CPU cooler category, AIOs have a few advantages that are very attractive. First, they are usually more space efficient than the beefier designs of air coolers thanks to the efficiency of a radiator and lilquid. Second, they have a certain aesthetic appeal, thanks to the pump block (often with RGB) and the visible fans on the radiator. Third, depending on the fans you use, budget AIOs can provide a less volatile heating solution, as most air coolers will see larger variation in temperatures than the liquid within an AIO that should lead to smooth temperature rises/falls. So even if pure performance and price may favor a high-end air cooler like the DH-15, budget AIOs have their place in considering a cooling solution for the 3950x. And if you decide to go down the AIO road but have a smaller budget, there is no better option than the EVGA CLC 280.

Now, I’m sure that many of you were expecting a 240mm for our budget tier AIO, but to be honest, 240mm AIOs are rarely worthwhile. They cool slightly less well than high-end air coolers like the Noctua DH-15 or Dark Rock Pro 4, are more expensive, and introduce the risk of pump failure or leakage. So for our budget tier, we still wanted to select a 280mm option as that is where you really begin to see gains over air CPU coolers. Our choice comes from EVGA, the most beloved component producer due to its absolutely amazing customer service and warranty rules, and its very high quality products. The CLC 280 is no different, offering quality and reliability where you most want it, but also giving a great cooling performance and some nice RGB touches on the pump block. It may not have as much RGB as some of the more expensive models, but it will keep your 3950x even with moderate overclocking and will look good doing it.

While this is the budget tier, it really is more of a mid-level option as it still is expensive when compared to the air cooling options. At $118, the CLC 280mm is hard to call cheap, but based on the top-notch quality and great performance, we think it is easily worth the price. So if you are ready to dive into the world of liquid cooling with an AIO but aren’t ready to mortgage your house to do it, the EVGA CLC 280mm is a great choice.

Outside of LN2 (liquid nitrogen), custom cooling loops, or some of the other more exotic CPU cooling options, a high-end AIO will give you the absolute best performance possible. If you have the space for a 360mm radiator and are willing to invest, a high-end AIO will keep your 3950x cold when idle and still cool under load, even with moderate-to-heavy overclocking. There are plenty of good options from Corsair or CoolerMaster in this space, but for the best possible, we recommend going with the Thermaltake Floe DX 360mm AIO for the best AIO cooler for the Ryzen 9 3950X.

We’ve talked about this AIO in the past for its absolutely stunning RGB, but it also offers killer performance. Thermaltake (often shortened to TT) is a well-known producer of components, with a focus on cooling solutions like fans and AIOs, but also producing PSU’s and cases. This particular AIO brings together a variety of their highest grade components to show off exactly what TT is capable of. If you want the biggest, brightest, best cooling mainstream option for your 3950x, the 360mm Floe-DX is tough to beat.

If you are going to spend $750 on the 3950x, then it makes sense to invest in a high-end CPU cooler. Even this high-end option, which is one of the most expensive AIOs available today, you are looking at approximately 33% of the price you paid for the CPU itself. At $240, this AIO isn’t cheap, but the combination of aesthetics and performance are hard to beat. If you do want to look at a similar model but don’t have the budget, the 360mm Floe (non-DX), has a lot of the advantages at a more reasonable $135.

This is an exciting time to be a PC builder, with options like the 3950x showing just how far we are able to go in terms of computing performance for mainstream use. But to get the most out of the quite expensive Ryzen 9 processor, you will need cooling performance and power management to match. For the cooling, this guide to CPU coolers should help you decide. And keep an eye out for a guide to choosing the right motherboard to go with your cooler and CPU soon!