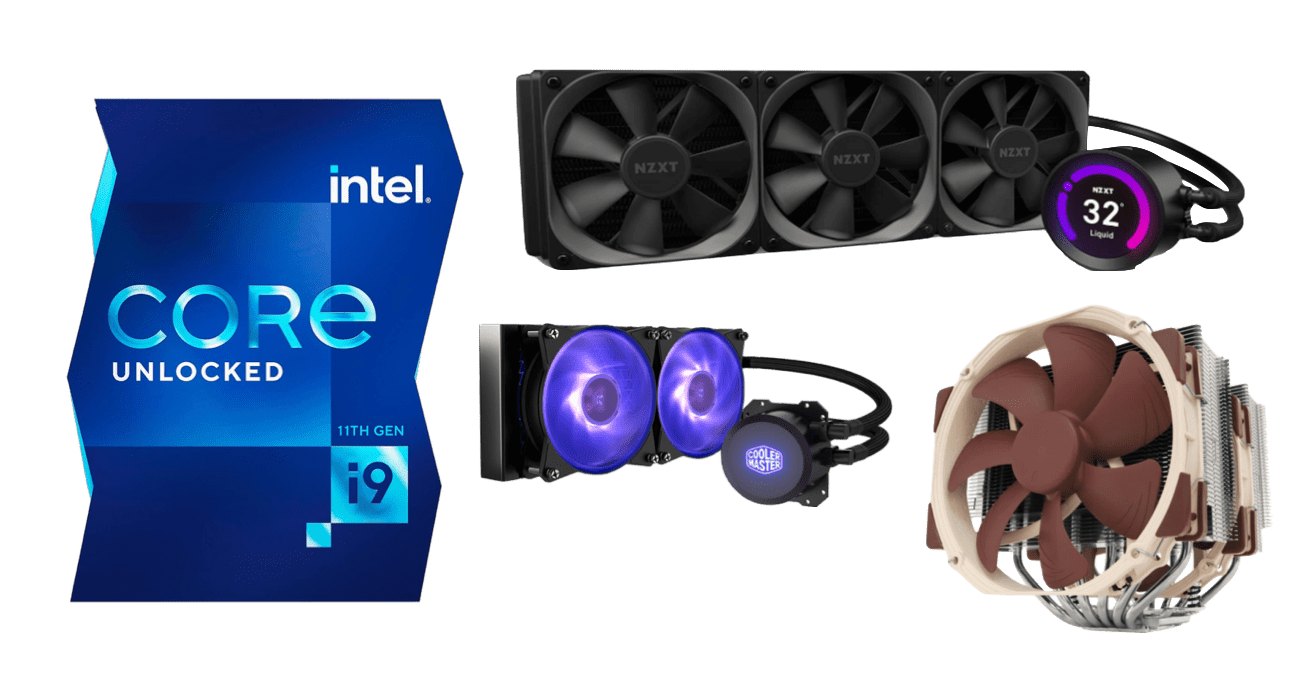 The recently released Intel Core i9-11900K is a very fast processor. With a max turbo of over 5 GHz—it’s hard to say otherwise. While the question of whether the 11900K is an upgrade over the 10900K is debatable; one thing that everyone unanimously agrees on is that the 11900K gets very, very, hot.

Intel inexplicably reduced the total core count from its 10th Gen i9 processors, going from 10 cores to 8. With heavy competition from AMD bearing down with the likes of the 5900X, consumers were somewhat confused as to what Intel’s game was. Turns out, it was pretty simple. Team Blue’s game plan was to push the 11900K as fast as technologically possible. This was in hopes that it will keep up with the competition. While they succeeded in some instances (gaming), AMD still managed to decimate the mere 8 cores of the 11900K. In fact, even the last-gen 10900K managing to keep up or surpass it in certain tasks. Add to this the fact that it runs hotter than the sun itself, and you’ve got a very confusing high-end CPU.

With Intel pushing their 14nm technology to its absolute limits, the 11900K was bound to get hot. How hot, you ask? Well, when running a simple 10-minute stress test, the 11900K shoots up to its recommended maximum temperature of 98 degrees Celsius. You can however get this temperature down to around 88 degrees by sacrificing some performance; which is quite absurd for a high-end consumer CPU that sells for north of $500. Moreover, the 11900K easily overheats when using even a 240mm AIO. This already gives a sign of how extreme of a cooling solution you will need to tame this beast.

With all that said, what caliber of CPU cooler must you get in order to effectively cool the Core i9-11900K? The short answer is water cooling. This is generally the only way to go— with one exception, which you will see below).

Best Coolers for i9-11900K – Our Recommendations

To effectively cool the fiery inferno that is the Intel Core i9-11900K, you’re going to need a pretty beefy cooling solution. Most people don’t want to go through the hassle of setting up custom loop water cooling. Luckily, NZXT has the next best thing.

NZXT’s Kraken Z73 is an AIO that’s well-equipped to handle almost any thermal load you throw at it.  With its 360mm radiator along with the triple 120mm fans, the Z73 is able to keep up with the rigorous heat output of the 11900K.

The Kraken lineup of liquid coolers has long since been a fan favourite. This is mainly due to their clean, minimalist design along with top tier cooling performance.

The Kraken Z73 also features a circular 2.36-inch LCD display over the pump. This can be customised according to your liking to display a variety of system stats such as CPU temperature, pump speed, and many more.

The Kraken’s build quality is also very good, with the water block primarily using high-quality plastics and copper. With its muted colours and sleek design, you would find no trouble making the Z73 blend in with the rest of your system.

While the NZXT Kraken Z73 offers stellar cooling performance, it is quite expensive at an MSRP of $280. With that said, if you’re dishing out over $500 for a high-end Intel CPU— the chances are that you probably won’t mind spending some more for an adequate cooler.

It probably doesn’t come as a surprise to many of you that the only air cooler capable of sufficiently cooling the Core i9-11900K is the revered NH-D15 by Noctua. This is a 6-heat pipe, dual-tower behemoth of an air cooler. Furthermore, it is universally known as one of, if not the best CPU air cooler that money can buy.

The NH-D15 comes with a pair of 140mm PWM fans along with Noctua’s special blend of thermal paste. Its large size allows the NH-D15 to keep up with the hefty water coolers and AIOs. In most heavy loaded tests, the 11900K managed to boost up without thermal throttling—which is a testament to the amazing Noctua engineering at work.

The NH-D15 also comes with Noctua’s state of the art fans that run extremely quiet. They’re durable and well-built so you won’t have to worry about any unnecessary rattling. The PWM supported fan headers allow you to freely control fan speed and set custom fan curves depending on your usage.

The award-winning air cooler is iconic for its beige colour and industrial-looking design. Although you can also get the sleeker Chromax Black version if you wish for a more muted look.

For $100, you really can’t go wrong with the Noctua NH-D15. Especially since it manages to keep up with AIOs and water-cooling solutions that are three times its MSRP.

If you really want to run an AIO solution to cool your Core i9-11900K without breaking the bank, Cooler Master has got you covered. The MasterLiquid ML240L does not come with all the bells and whistles that you might find on a Kraken. But nonetheless, it manages to do an exemplary job of cooling the 11900K.

What the ML240L lacks in flair, it makes up for with a large pump and a 240mm radiator.  Cooler Master has opted for a dual-chamber water pump design. This leaves more horizontal space on the motherboard so your components won’t be cramped.

However, the MasterLiquid ML240L does lack a pump head display like that of the NZXT Kraken, which some may find incredibly useful to get system information at a glance. The good news is that the ML240L packs a strong pump with extremely quiet fans that does a no-nonsense job of handling the strongest thermal loads thrown at it.

At $85, the Cooler Master MasterLiquid ML240L is an absolute steal for an AIO. Moreover, when you pair it with a high-end processor like the Core i9-11900K, you won’t have to worry about running into any thermal constraints. Plus, you can spend the money you saved elsewhere on your system!

There you have it, our top three choices for the best CPU coolers to pair with the Core i9-11900K. While the all-new Rocket Lake generation of processors by Intel was met with a lukewarm reception, supply constraints with Team Red mean more and more consumers are gravitating towards what’s readily available.

So, if you’re buying a ridiculously power-hungry CPU like the Core i9-11900K, going with any of the above coolers will be your best bet. The Kraken Z73 offers stellar water-cooling performance for a premium price. On the other hand, if you don’t want to deal with the hassle and unreliability of AIOs, the Noctua NH-D15 matches the top water-coolers in its ability for a much cheaper price. However, if you desperately wish to add an AIO to your system; but do not want to spend exorbitant amounts on one—the Cooler Master ML240L is a strong budget contender.