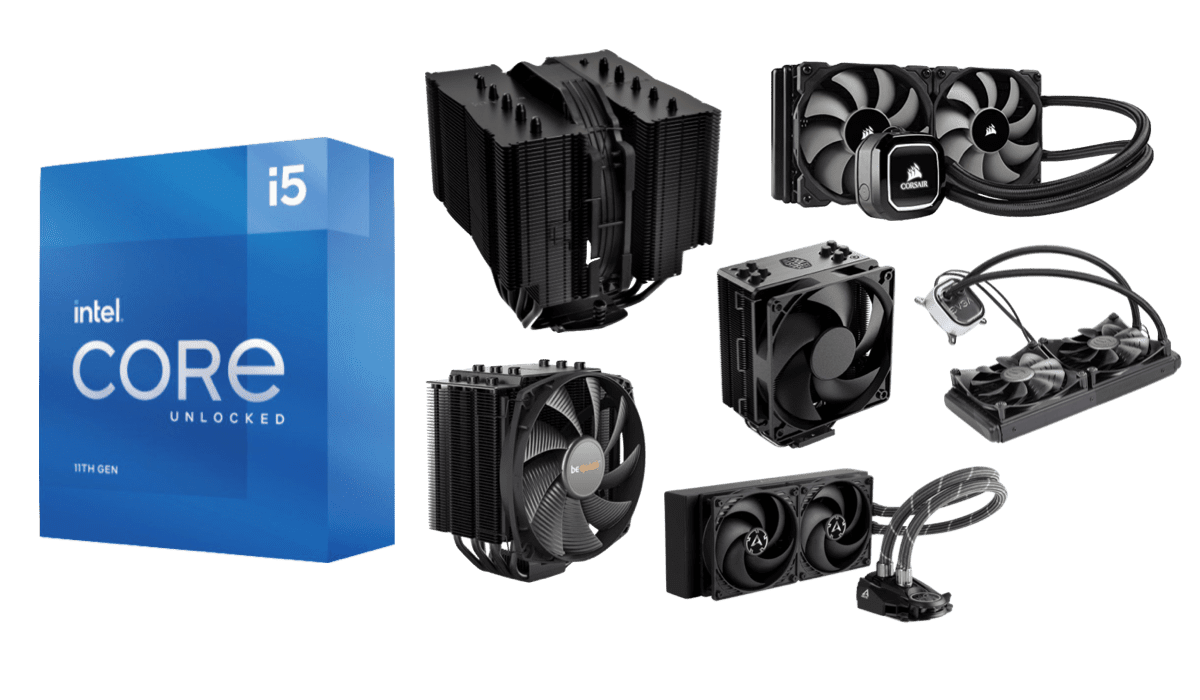 The new generation of Intel microprocessors is upon us, and this 11th iteration of Intel CPUs has variants that show promise in providing some much-needed competition against AMD’s Zen 3 Ryzen 5000 series.

One such Comet Lake variant is the highly anticipated i5-11600K. This processor is made to compete against AMD’s Ryzen 5600X (see our comparison here), and it has the best chance in doing so if we consider that it has an equal number of cores and threads with its competitor. Additionally, this CPU will have RAM support (3,200 MHz max memory speeds) and PCIe 4.0 compatibility that its 10th generation predecessors lack. But what will truly make this CPU competitive is its price. With an MSRP of $262, it can potentially cost over $100 less than the Ryzen 5 5600X at launch; as Ryzen 5000 series CPUs are still being price gouged due to their lack of sufficient supply and adequate competition. In terms of performance, the Intel i5-11600K only trails the Ryzen 5 5600X by about 3% in single-core performance (according to GeekBench 5 benchmarks: 1,565 vs 1,619), so the price differential will, ultimately, make the Intel i5-11600K the far more cost-efficient option.

Another area in which the i5-11600K trails the Ryzen 5 5600X is its lack of a stock CPU cooler, and its much higher power demand of 125 watts (versus the 65 W TDP of the Ryzen 5 5600X). Thankfully, the money saved from the purchase of the CPU itself can be allocated towards a high-end CPU cooler, which will be far superior to AMD’s stock Wraith Stealth cooler, and can potentially last even more iterations of processor upgrades in the future. To help you find the best CPU cooler to pair with the i5-11600K, we have compiled a list of six of the best options the market has to offer: three of which are air coolers, while the other three are AIO liquid coolers – all under $120.

If you need a CPU cooler on a budget, that can provide sufficient cooling for a high thermal-power demanding processor, like the i5-11600K, then you will find the Cooler Master Hyper 212 to be quite the satisfactory option – and the ‘Black Edition‘ simply makes it all the more stylish for any build.

The Cooler Master Hyper 212 makes use of a PWM controlled, 120 mm, fan with Loop Dynamic Bearings (LDB) that are designed to reduce noise and vibrations. This fan is Cooler Master’s Silencio FP120, which can output 42 CFM of airflow, a static pressure of 2.9 mmH2O, and just 6.5 to 26 dBA of noise emissions – while spinning at 650 to 2,000 RPM. This fan also has an impressive MTTF (Mean Time to Failure) of 160,000 hours.

The Silencio FP120 is used to cool a fin-stack array heatsink, with nickel plated jet-black fins that draw heat from the CPU via four heat pipes, designed with Direct Contact Technology for more efficient heat dissipation.

The Cooler Master Hyper 212 has dimensions of 120 mm (L) x 79.6 mm (W) x 158.8. mm (H), so it can fit in most form factors (excluding SFF cases). This CPU cooler is upgradable as well, as a second fan can be attached for a push-pull configuration; which will, of course, add to the cooler’s depth size.

What’s most important in this category is the price, and the Cooler Master Hyper 212 Black Edition is currently selling for just under $40 – including a 2-year warranty. A second (optional) Silencio FP120 fan will cost an additional $20,

For those that value silent operation, but also need the CPU to be chilled no matter what the load-percentage or overclocking frequency, we suggest the be quiet! Dark Rock 4. This single-fan, single-tower, air cooler is easy to install, stylish, powerful, and virtually inaudible.

The fan used on the Dark Rock 4 is be quiet!’s Silent Wings 135 mm, PWM controlled, nine-blade fan; which includes a six-pole motor (for less vibrations) and high-end fluid-dynamic bearings (FDB). It is these bearings that allow it to have an impressive 300,000-hour lifespan, as well as noise levels from just 10.5 dBA – at a 50% load – to only 21.4 dBA at its maximum load (1,400 RPM). The heatsink-tower that this fan cools is all aluminum, and draws heat from the CPU via six, 6 mm, copper heat pipes and airflow-optimized wave-contoured cooling fins. These fins have small dots on their surface, and a black coating with ceramic particles: a design made for optimizing heat dissipation. The top cover of the heatsink is all-black, with a diamond-cut and a brushed aluminum finish. Like other single-fan air CPU-coolers, the Dark Rock 4 can have a second fan installed to it if the cooling is found to be insufficient.

The dimensions of this CPU cooler are 96 mm (L) x 136 mm (W) x 159 mm (H), so it will fit even within mini-ITX cases that allow for a clearance of 160 mm; like the Fractal Design Define Nano S. The only shortcoming of this CPU-cooler is that it does not come with a thermal compound, which will need to be purchased separately.

That being said, the be quiet! Dark Rock 4 can currently be found for around $69, which is an excellent price that allows the extra budget leeway for a top-notch thermal paste.

Though the Cooler Master Hyper 212 and the be quiet! Dark Rock 4 are both excellent air-cooling options in their own right, few coolers can compete with Noctua’s flagship NH-D15 and its single-fan variant: the NH-D15S Chromax.Black. These units can sufficiently chill almost any consumer-grade CPU; naturally including the Intel i5-11600K.

What gives the NH-D15S its superior cooling ability is its massive two-tower aluminum heatsink. It has an asymmetrical shape which provides it with a 65 mm clearance for RAM, and better PCIe compatibility, as well as six direct contact, nickel played, heatpipes for better heat transfer. Together with the purchase of the NH-D15S you will also receive a syringe of Noctua’s high-end NT-H1 thermal compound.

In terms of compatibility, the NH-D15S has dimensions of 160 mm (H) x 150 mm (W) x 135 mm (D), so it will fit all ATX and most micro-ATX cases. You can find whether or not your motherboard and/or case is compatible with the NH-D15S on Noctua’s website here. The all-black exterior of the Chromax.Black variant also makes the NH-D15S a stylish option for any build.

You can currently find the Noctua NH-D15S for around $90, including a 6-year warranty. An additional NF-F12 fan would cost an extra $20.

Now, if you prefer liquid AIO cooling over air cooling – either for the aesthetics, or the better case RAM & PCIe compatibility – there do exist respectable options that can be found at a decent price, and are guaranteed to optimally cool the Intel i5-11600K. The 240 mm radiator option that we suggest for the task is the Corsair Hydro H100x.

This CPU cooler makes use of two SP Series, 120 mm, PWM-controlled fans, that can output an airflow of 57.2 CFM, and a 2.08 mmH2O static pressure. These fans operate between 600 and 1,700 RPM, and can – admittedly – become somewhat noisy: reaching 37 decibels of sound emissions.

The high-density aluminum radiator that the fans cool has dimensions of 275 mm (L) x 120 mm (W) x 27 mm (H), and attaches to the 56 by 56 mm copper cold plate via two white sleeved low-permeating rubber tubes of 380 mm length. The pump head has a white, monochrome, LED illuminated display, that is designed with Corsair’s logo.

Stylish, powerful, and easy to install, the Corsair Hydro H100x can currently be found for just under $100. A CPU cooler well worth its investment.

Overclocking on a regular basis can cause damage to the CPU if the cooling is insufficient. That is why, if you plan on making the most of the processing capabilities of the Intel i5-11600K, you will need a powerful AIO cooler that can keep temperatures consistently low. The best CPU water cooler for the task is Arctic’s new and unique Liquid Freezer II 240.

Though two are the fans that cool the 277 mm (L) x 120 mm (W) x 38 mm (H) radiator, this liquid cooler actually comes with three fans in total. The two 120 mm fans are PWM-controlled, equipped with FDBs, can spin at 200 to 1,800 RPM, and can output: an airflow of 56.3 CFM, a static pressure of 2.2 mmH2O, and up to 35.8 dBA of noise. The third fan that is included is actually situated on the pump head, and is used to provide extra cooling for the base and voltage transformer. This 40 mm VRM fan can spin at speeds ranging from 1,000 to 3,000 rotations per minute, and is also controlled via the same PWM configuration as the other fans.

The aluminum radiator itself connects to the copper & micro-skived fin cold-plate via 450 mm sleeved tubing, and the pump only operates when necessary; which means up to 80% less power consumption. Because of the VRM fan, the pump head does have strange dimensions of 98 mm (L) x 78 mm (W) x 53 mm (H), so do make sure that there is enough clearance on your motherboard prior to purchase. When in place, the Liquid Freezer II displayed 18% lower temperatures than the Corsair H100i, and 20% lower temperatures than the Cooler Master ML 240P Mirage, for cooling an Intel i9-9900K at 3.6 GHz. When overclocking the i9-9900K to 4.9 GHz, it proved to be 9% more powerful than the Corsair H100i, and 16% more powerful than the Cooler Master ML240P Mirage (benchmarks carried out by KitGuru, and displayed by Arctic).

Despite its amazing performance, you can find the Arctic Liquid Freezer II 240 for as low as $12- (including a 6-year warranty) – making it an excellent, cost-efficient, option for cooling the i5-11600K, even at its highest frequencies.

Finally, going up to a larger 280mm AIO cooling option, we have the EVGA CLC 280. Anything larger than this cooler would not be a cost-efficient option for the Intel i5-11600K, as the CLC 280 has more than enough power to sufficiently chill this 125 W CPU.

The EVGA CLC 280 has two 140 mm, Teflon Nano Bearing, fans, that spin between 600 and 2,200 RPM, and can output a maximum airflow of 113.50 CFM & a maximum static pressure of 4.20 mmH2O. The curved housing of these fans is designed to improve airflow through the radiator, and keep vibrations & noise at a minimum. According to EVGA, these fans output noise levels ranging between 16 dBA to 39.5 dBA. The only disappointing aspect of these fans is their lifespan, which is rated for just 80,000 hours.

The radiator that is cooled by these fans has dimensions of 312 mm (L) x 139 mm (W) x 27 mm (H), is all-aluminum material-wise, and is attached to a 100% copper waterblock via sleeved tubing that is 400 mm in length. This cooling block is stated to emit only up to 20 dBA of noise, and – together with the fan speeds – can be controlled via EVGA’s-own included software. Unlike all the aforementioned CPU cooler options, this pump head has a fully controllable RGB LED display (in the shape of EVGA’s logo), which can be customized via the same aforementioned software program.

For builds featuring the Intel i5-11600K, the EVGA CLC 280 is an ideal option; as it provides powerful cooling, low noise emissions, an RGB flare, and currently costs around $110 – backed by a 5-year warranty.