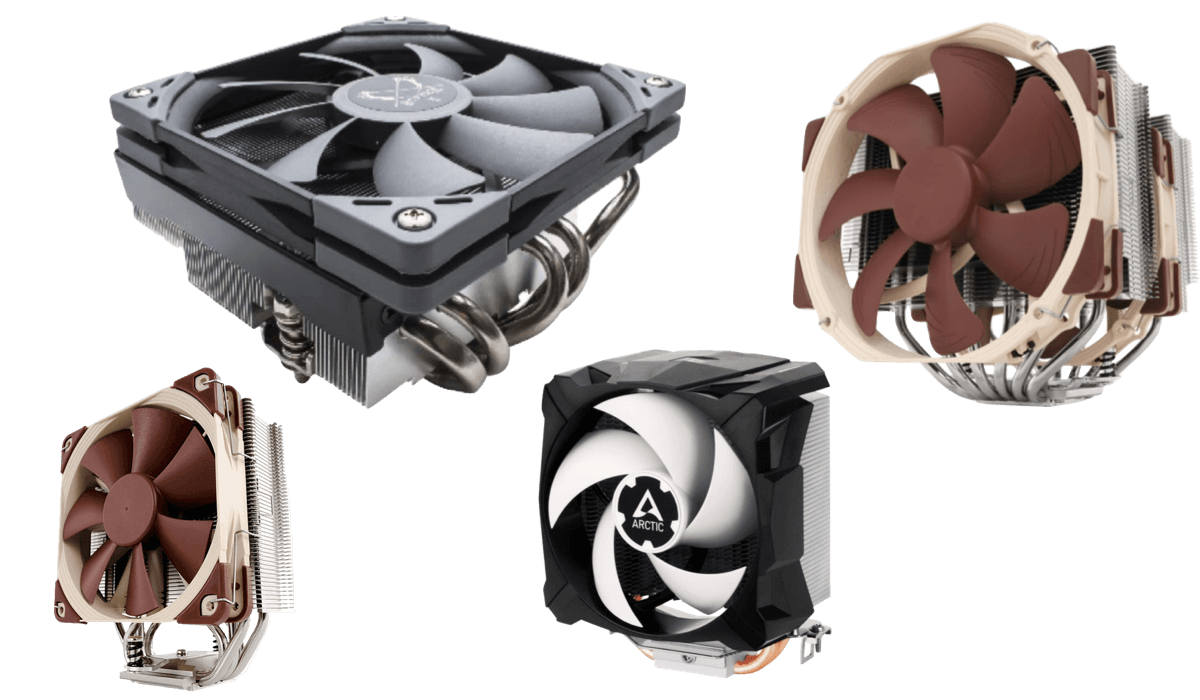 There are two main options when it comes to cooling your CPU: liquid AIO coolers, and airflow coolers. The former type will usually provide superior cooling, though may output a considerable amount of noise, due to the fans and pump of the cooler; not to mention, they can be far more expensive when compared to the latter. Despite this generalized superiority of the liquid coolers, there are some airflow counterparts that will reach, or even surpass, the cooling capabilities of a liquid cooler, all while being far less expensive and noisy.

Depending on your type of setup, the cooling needs for the processor will differ. Factors of differentiation include the power of the CPU to be cooled, the level of heat emitted by other components (i.e. if you have a GPU that itself runs hot, like an AMD Radeon RX 5700 XT), the size of the case you will be using and, finally, the budget that you have to work with.

Taking the above factors into account, we have amassed a list of the best CPU coolers available for your needs. This list includes the best, most powerful, air CPU cooler, the best mid-range option, the best SFF (low profile) airflow cooler, and the best economical option. Of course, it must be said that investing in a good cooler is always a smart venture to make, as the CPU cooler can last through multiple CPU upgrades.

For those looking to purchase a 10th generation Intel i7-10700K or i9-10900K, or for those planning to buy a Ryzen 7 3800XT or Ryzen 9 3900XT, the Noctua NH-D15 is the best air CPU cooler that money can buy. It will allow you to overclock your CPU steadily and to your heart’s content, all while outputting minimum noise. This cooler can also be ideal for less powerful CPUs, especially if other hardware components are known to run hot, like the aforementioned AMD Radeon RX 5700XT GPU that can operate at triple-digit temperatures.

Noctua’s flagship airflow CPU cooler makes use of two NF-A15 140mm fans that are equipped with SSO2 magnetic bearings. These bearings provide durability, as well as low noise-level output. The near-silent operation of the NH-D15 is further enhanced by the low-noise adaptors and PWM functionality that the fans possess. These NF-A15s operate of speeds of up to 1200 RPM, outputting a static pressure of 1.51 mmH2O and airflow of 115.5 m3/h or 67.98 CFM. Note that static pressure refers to the overcoming of airflow impedance, like the impedance of a heatsink, whereas airflow is a measure of the amount of air that the fans can push; generally being better for cooling open spaces rather than for heatsinks.

These two NF-A15 fans are used to chill the NH-D15’s all-aluminum heatsink, which draws heat from the CPU via its six nickel-plated, and direct contact, heatpipes. To eliminate air gaps between the CPU and the interface area, the NH-D15 comes with Noctua’s premium NT-H1 thermal compound (cooling paste) pre-applied.

Benchmarks for this CPU cooler carried out by TweakTown prove that the design results in incredibly low CPU temperatures, that rival some of the best liquid cooling options they’ve tested. Even under load, and while overclocking, the NH-D15 kept the CPU at a 69.33-degree temperature, while only outputting 24-35 dB of noise – which roughly equates to the sound of a whisper, being virtually inaudible from a foot away. You can currently find the NH-D15 for $89, which is a more than fair price for its level of quality and performance.

If you aren’t looking to buy a high-end CPU, or just don’t really care too much about overclocking, then the NH-D15 may be a bit overkill for you. Thankfully, Noctua still offers an option that will provide sufficient cooling at an even better price: The NH-U12S. Some examples of CPUs that would benefit most from this cooler include the Intel 10th generation i5 or i7 series CPUs, the newly-released Ryzen 3 3100 or 3300X, as well as the Ryzen 5 3600XT and Ryzen 7 3800XT.

The heat resulting from the CPU is transferred to the all-aluminum heatsink of the NH-U12S via its five direct contact, and nickel-plated, heatpipes. The included pre-applied thermal paste is once again Noctua’s NT-H1 cooling compound, which is one of the best thermal pastes available.

Equivalent benchmarks from TweakTown for this CPU cooler show us that the U12S kept the CPU at a maximum temperature of 75 degrees Celsius when the CPU was overclocked and under load. This temperature decreased by two degrees via the use of a second NF-F12 fan; though perhaps a NF-A12 PWM fan may be a better option as a secondary fan for this CPU cooler. Noise-wise, the NH-U12S operated between 26-40 dB, which is once again a very respectable set of benchmarked results from Noctua’s mid-range option. You can currently find this cooler for $64; a decrease of $25 from the NH-D15.

The Scythe Big Shuriken 3 is only 69mm tall, making use of a slim, 15mm thick, 120mm fan named the Scythe Kaze Flex Slim. This PWM controlled fan makes use of sealed precision fluid bearings for increased durability and lower noise level emissions. This fan has a mean lifespan of 120,000 hours of operation, and emits sound levels of only up to 24.9 dB. The Kaze Flex Slim fan blades can spin at 1200 RPM, and output a static pressure of 1.05 mmH2O and 51.17 CFM of airflow. Note that this four-pin fan can be removed and replaced by another 120mm fan of your choice, given of course that you take into account the increased thickness of the replacement fan. An example would be Noctua’s NF-A12x25 fan, which will add 10mm of thickness to the Big Shuriken 3 (making it 79mm tall) but will vastly improve its cooling performance and lessen its noise output.

The aluminum heatsink of this cooler is asymmetrical, in order to avoid interfering with the RAM cards or other hardware components, and receives heat via five sintered and nickel-plated copper heat pipes that connect it to the copper base from which it makes contact. The Big Shuriken 3 also includes a syringe of thermal paste to be applied prior to its installation.

Benchmarks carried out by OptimumTech and eTeknix show us that the Big Shuriken 3 will keep your CPU between 53.8 and 63.4 degrees Celsius under low to heavy loads, but can reach anywhere between 77.2 and 89 degrees when overclocking an Intel i7-7700K CPU; though overclocking for SFF builds is not generally advised. The noise levels that the Scythe Kaze Flex Slim fan reached at its peak was only 41.4 dB, which is a great result. You can currently find the Big Shuriken 3 for only $46, an excellent price for both its performance and versatility for SFF builds.

If you are in the market for a CPU cooler but don’t have much to invest in one, worry not, for there do exist respectable options that will provide sufficient cooling for budget and entry-level CPUs. This CPU cooler will be best for Intel i3 series CPUs, the new Ryzen 3 3100 and 3300X, and can even go as far as cooling the Ryzen 5 3600 or i5-10600 – given that overclocking isn’t that important to you.

The CPU cooler we speak of is the Arctic Freezer 7X. This cooler includes a 92mm fan which is inspired by Arctic’s P-Series, though the exact specifications for this fan are unfortunately not provided by Arctic. We do know that the fan uses a motor developed by Arctic which produces lower coil temperatures, runs less audibly, and operates more efficiently than any of their previous models. The PWM fan is used to cool a 44-fin heatsink, making use of four direct touch heat pipes and a pre-applied MX-2 thermal paste in order to best transfer heat from the CPU.

Benchmarks run by the YouTube channel Ponchato, show us that Arctic’s claims for the Freezer 7X are not unfounded, as it maintained temperatures of only up to 41.7 degrees Celsius at 1.35V and max RPM (though do note that this test was done using a Ryzen 3 1200 at 3.1 GHz and 65W TDP). The idle noise output from this cooler was at 29.2 dB, were at 40 dB and max RPM it kept the Ryzen 3 1200 at 46.5 degrees Celsius.

If you are looking to purchase a CPU cooler ta a low price, then the $19 Arctic Freezer 7X is the best option you can find for its low cost and quality build.