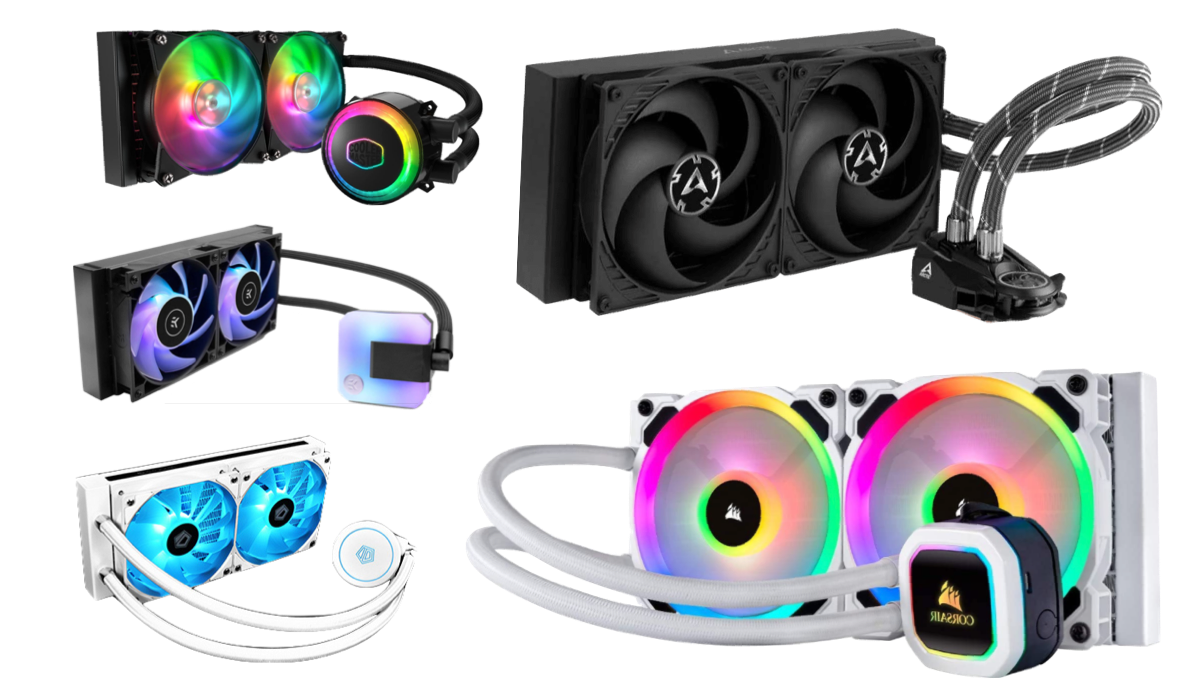 Choosing a 240mm AIO is becoming harder and harder, but that’s because of how many great options have been produced in recent years. As liquid cooling has become popular due to the aesthetics of a small block on the CPU vs the big air coolers, more and more companies are putting strong options into the market. They span the budget, with some crazy expensive options (that usually include some RGB bling and high-performance fans) to the pretty wallet-friendly (which can still be very good bang-for-your-buck buys).

240mm AIO loquid coolers are still primarily an aesthetic (or sizing choice for ITX builders!) option as the best air coolers like the Dark Rock Pro 4 and Noctua DH-15 perform equivalent or slightly better in benchmarks while costing typically the same or less. But the looks are really different, and there’s something beautiful about a nice AIO gaming setup that still have an advantage in minimizing “burst” temps that air coolers just can’t match.

So, if you’re ready to dive into liquid cooling with a 240mm AIO, these are our choices for best options for a 240mm AIO depending on which quality you value the most for your next build:

If you’re looking for the best bang for your buck on a budget and don’t necessarily need all the bling of an RGB cooler, one of the most reputable names in value cooling has the perfect 240mm AIO. The no-frills design helps keep costs reasonable, while offering performance that outshines way more expensive offerings from other big-name manufacturers. Benchmarks from independent reviewers like GamersNexus and KitGuru repeatedly show this cooler as a top competitor while costing significantly less, so for best budget performance 240mm AIO, we recommend the Arctic Liquid Freezer II 240.

While choosing an AIO is almost always an aesthetic choice at the 240mm size, that doesn’t mean that you aren’t looking for high performance. ARCTIC is known for its fans, especially the much-loved value options like the P12 120mm fans, and this cooler brings that same high-value low-cost to the liquid cooling world. If you aren’t fussed about RGB on the CPU block or the fans (which can always be replaced later if you change your mind), and really just want high-performance at a reasonable $100 price point, there really isn’t another option that can compete with the ARCTIC Liquid Freezer II 240.

Sometimes even those that do have a bit more budget aren’t overly concerned with RGB, but just want the absolute best performance they can get out of a 240mm AIO cooler. While this high-end cooler doesn’t completely avoid the RGB, it clearly focuses on maximized cooling potential. And that is reflected in all major benchmarkers, that consistently find this AIO to perform at the top of the heap. From water-cooling experts and overclocking suppliers EK, we recommend for best high-end performance 240mm AIO the EK 240mm AIO (finally, a simple name!).

EK is perhaps best known for its vast array of custom liquid loop cooling options, but they also make the highest performing AIOs and some of the best performing fans, the EK-VARDAR line of 120mm fans. In fact, part of the success of this AIO is likely the inclusion of two of those high-quality EK VARDAR fans that emphasize static pressure, perfect for pushing air through that radiator. While the CPU block and fans still offer some RGB, a nice touch for this high-end product, the emphasis is clearly on performance and it shows, with the AIO offering extreme cooling that some benchmarks put upwards of 15-20 degrees Celsius less than other coolers. At $120, this 240mm is an absolute steal that is perfect for any performance oriented (with still a bit of personality!) rig.

Even if you want high performance, you might also want a nice amount of bling to help spice up your battlestation. Unlike some of the biggest CPU coolers, 240mm AIOs can achieve great temps while also offering some nice aesthetics, and part of that is the RGB on the CPU block and the fans. And while the terms budget and RGB don’t often go together, one of the biggest names in gaming has an absolutely killer bang-for-your-buck performer. For best budget RGB 240mm AIO, we recommend the Cooler Master MasterLiquid ML240R.

CoolerMaster has a whole host of options for cooling, from air coolers to AIOs, at almost any budget point. Their products are always well-made and backed by solid customer service. This particular AIO is basically an RGB machine. From the Master Fan Air Balance fans to the dual-chamber RGB covered pump, there is lighting for you to customize all over the place. In fact, the difference between this AIO and the ‘High-End’ one below is not as much as you might think, especially considering this lighting extravaganza from Cooler Master comes in at a very compelling $100. It won’t keep things quite as cool as the $100 Arctic 240mm AIO, but it will still do a great job and offer that extra customization to keep your PC special.

At the highest-end of 240mm AIOs in terms of price, we find very strong performers with plenty of RGB. To be the best however, you need a little something extra. Some AIOs offer specially designed CPU blocks, like the additional small fan in the Arctic Liquid Freezer, while others look to ‘avant-garde’ designs like the EK that help stand out. But for our high-end RGB 240mm AIO, we wanted an AIO that performs great, offers every bit as much RGB as the competition, and comes with a useful add-on feature. For that, we turn to the GIGABYTE AORUS RGB 240mm AIO.

Gigabyte is a big name in gaming, and not just for peripherals but also main components. The AORUS line is typically the highest end Gigabyte line, offering the most features and customizability through RGB. This 240mm AIO is no different. Like the Cooler Master we recommended on a budget, there are RGB fans on the radiator and the CPU block offers more RGB. But this time, the CPU block has an LED screen that not only offers RGB customization, but also has six options for display (including things like CPU temperature or custom image rotator). This added screen combined with RGB and performance isn’t cheap, and with a price tag of around $190 you have to really want the LED screen in comparison to our budget AIO. But that added bonus (on top of the other great features) are what makes the AORUS our pick for best high-end RGB 240mm AIO.

Since we’re talking about aesthetics, and as we’ve mentioned in our past recommendations, some builders are looking to complete a certain theme and really tie the whole rig together via color matching. The most common of those themed builds is the ‘all-white’ build, and for a long time, this meant a very limited number of choices for cooling/fans that carried a heavy price premium. But recently, more and more options are appearing that are pure white (with some RGB) and promise not to put too big a hole in your wallet. Amongst those, the best value white 240mm AIO that promises great performance while fulfilling that specific color theme build is the ID-COOLING AURAFLOX x 240 SNOW.

ID-Cooling is a relatively new name in cooling to enter the mainstream builder zeitgeist, but it has quickly become a favorite due to the very competitive pricing, the relatively strong performance, the overall good build quality, and the slew of options in black and white at all sizes. It might not have the same reputation as some of the other very established manufacturers, nor does it have the same history to back it up, but for the price, the ID-Cooling AURAFLOW x 240 SNOW is extremely attractive. The design is beautiful (and of course, all white), the RGB is tasteful and compatible with almost all motherboards, and the cooling promises to be perfect for your mid-power CPU. For right around $80, it’s hard to find a better buy for an all-white build that doesn’t cost nearly double the price.

But if you do have nearly twice as much to spend, there is one white 240mm AIO that occupies the high-end of the pricing line-up and offers that extra oomph in terms of performance, looks, and history. If you are familiar with the building scene, you are probably reading this article and thinking, they are missing one of the most prolific companies with some of the best AIOs out there! And you’d be right, but that’s because we saved one of the best for last due to the pure beauty of their white version AIO. For best high-end white 240mm AIO, we have to recommend the Corsair H100i RGB Platinum SE.

We could have found a Corsair AIO to compete in almost all of these categories, they just make great cooling products and have been a major player in the AIO (and generally gaming) world for decades. But this SE (special edition) version is really something special. The double loop CPU block lighting, the LL120 double light loop fans, and the pure white radiator combine to make one pretty package. The cooling performance is strong, getting close to some of the picks in the performance category, and Corsair boasts one of the best integration software with iCUE to help get the RGB and fan curve just right. If you have the budget to pay for this $170 cooler want the absolute best all-white 240mm AIO, this Corsair H100i RGB Platinum SE is truly breathtaking.

CPU cooling is a vital part of any build, and the best air coolers are nearly equal in many ways to 240mm AIOs. But their size and bulkiness doesn’t always look nice, and now that quality AIOs are available at almost any budget, more and more builders are looking to get their feet wet with liquid cooling. Whether you are a performance-focused buyer, are looking for a little extra RGB flash, or want to keep your snow-white build looking pure, our recommendations will make sure to help you keep your CPU cool, and to help your rig look good doing it.