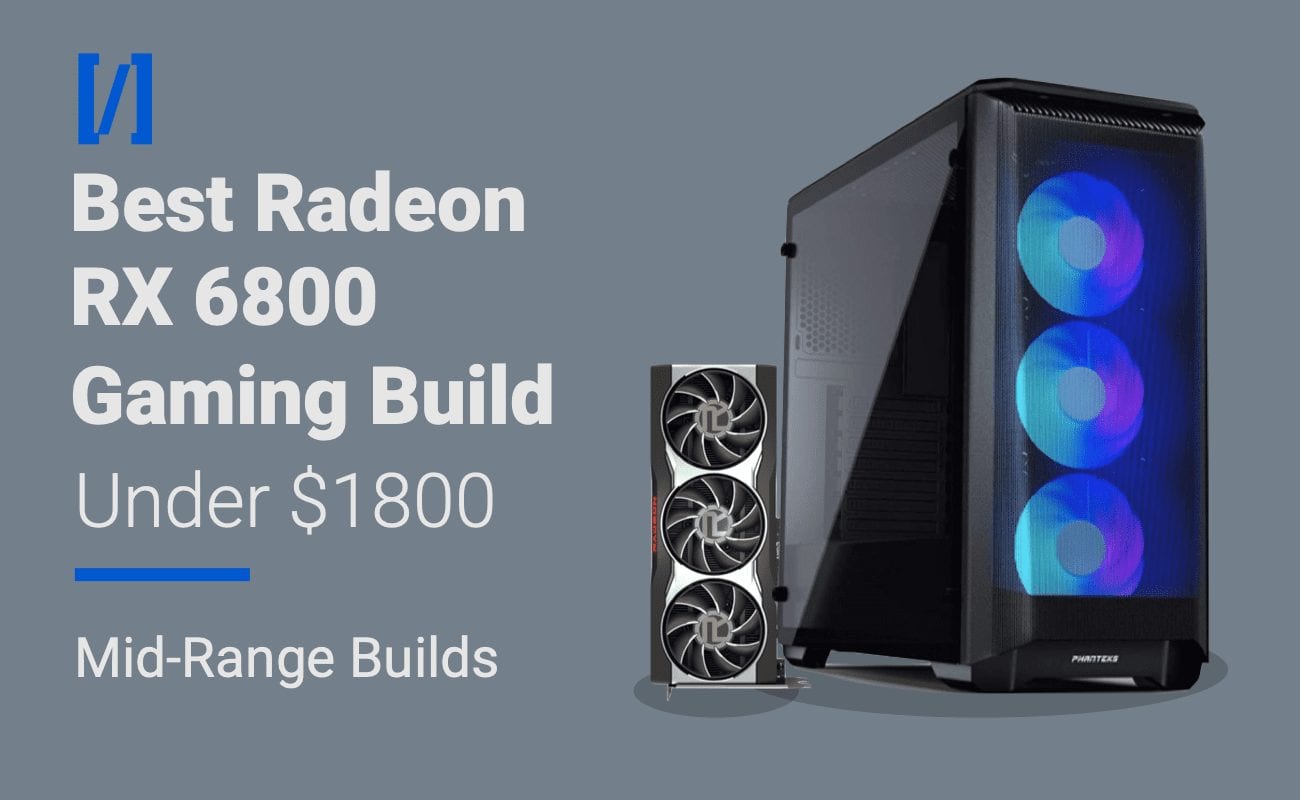 AMD’s RDNA2 launch announcement has put the cat amongst the pigeons in the upper end of the GPU market. Finally, Nvidia has competition on their hands. The entry-level RDNA2 GPU is the Radeon RX 6800. This GPU promises to equal or better the RTX 3070 in 1440p and 4k gaming performance but offers double the VRAM with 16GB instead of 8GB. Retailing at $579 the RX 6800 offers compelling performance for the money. We’re excited that GPUs capable of high FPS 1440p gaming is attainable for less than $600.

In this build guide, we’ve assembled a parts list that seeks to maximise the performance and longevity of the system based around the Radeon RX 6800. We’ve taken care to ensure that the PC will last well into the future without requiring upgrades or expansion. We’ve done this by choosing the current best in class CPU, optimised RAM and 2TB of NVME SSD storage. This PC will provide a top-notch gaming experience for the foreseeable future but packs enough punch to double as a versatile workstation and general-purpose PC as well. Its ideally suited to high FPS 1440p gaming or running a 1440p ultrawide monitor for an enthralling AAA gaming experience. It’s well capable of 4K gaming if you want to bring PC gaming to the living room TV or a dedicated 4K monitor. Let’s run through the parts selection.

We’ve opted for AMD’s 8 core part in the new Zen 3 line up for this build, the Ryzen 7 5800X. This CPU has a 3.8Ghz Base clock and boosts to 4.7GHz with ‘Power boost Overdrive’ meaning it has excellent gaming performance. AMD has boasted of a huge leap forwards with their revised Zen 3 Architecture. They’ve enhanced the Cache access for the 8 cores and reduced the latency of the interconnect between cores – traditionally a big performance barrier in the Zen layout. All of this adds up to a CPU that will outperform any current intel CPU in gaming, whilst 8 cores and 16 threads meaning it is both adept at productivity tasks and multitasking but also set to last the course as programmes become more demanding in future. Finally, the RDNA2 announcement offered a few more compelling reasons to opt for an AMD CPU. Combined with the B550 motherboard ‘Smart Memory Access’ gives the CPU broadband interconnect with the GPU VRAM dramatically enhancing framerates at 1440p and 4K. AMD Claim a benefit of 5-10% using this technology, certainly worthwhile. Secondly this CPU is fully PCIe 4.0 compliant allowing faster communication with both the primary GPU and a PCIe 4.0 SSD in future. Overall the $449 Ryzen 5800X is a rock-solid core for this PC and represents best in class technology at a reasonable price point.

The Ryzen 5800X isn’t particularly hot running or hard to cool. We’ve chosen a great looking and reliable tower cooler with some added RGB highlights to match the case. This tower cooler – the ID-COOLING SE-234-ARGB, uses 4 heat pipes, and a quiet 120mm PWM tan to draw heat away from the CPU. Its 200W cooling capacity is more than enough for the 105W power draw of the 5800X. It’s simple to install and includes AM4 compatible bracketry. Meanwhile, black anodising and an addressable RGB shroud compliments the styling of the motherboard and case to give your PC a cohesive aesthetic. If you’re not a fan of the RGB, the Cooler Master Hyper 212 Black edition is an equally capable and more discreet looking cooler at the same price.

MSI has released a strong line up of B550 motherboards in support of Zen 3 and this mid-range Gaming Edge model hits the sweet spot of performance, features and price. The 10+2 phase power supply circuitry is more than capable of supporting the Ryzen 5800X at full speeds and there are heavy-duty VRM heatsinks to help draw heat away from the components. The MSI MPG B550 Gaming Edge WiFi motherboard incorporates Wi-Fi 6 and Bluetooth for versatile connectivity but also has a 2.5GB Ethernet port powered by a Realtek chipset. The ALC1200 Audio codec is mid-range but allows for excellent audio output and there’s optical SPDIF as well as five 3.5mm audio outputs. It supports PCIe 4.0 and AMD’s ‘Smart Memory Access’ technology to boost the performance of the RX 6800 GPU. Finally, it has a discreet black aesthetic in keeping with the rest of the build.

RAM prices have dropped consistently in 2020 and 32GB is now a sensible choice for a high-performance PC build. Our own investigations have shown 3600MHz RAM to be the sweet spot in terms of performance and value on Zen 2 CPU’s. Because Zen 3 CPU’s retain the same IO die and ‘infinity fabric’ as Zen 2 we’re confident that 3600MHZ speed will remain the best value option for Zen 3. Whilst this RAM has slightly slower CL18 timings it’s clock speed that really impacts performance by synchronising the CPU’s infinity fabric and RAM frequencies. This 32Gb Team T-FORCE Dark Za Memory Kit comes with a QVL supported one clock A-XMP overclock profile to get it running at optimal speed so you can be confident of compatibility. The Anodised black heat spreader matches the black aesthetic of the motherboard. In 2x16GB configuration you benefit from dual-channel operation and also leave 2 RAM slots free should you ever need to upgrade capacity in future.

Games are getting ever-larger and we don’t want to under specify SSD space for a versatile and powerful PC. That’s why we’ve opted for the Adata Swordfish NVMe SSD in 2Tb capacity. At $200 this is a remarkable value. Whilst it is a mid-range SSD with 1,800MB/s read and 1,400MB/s write it’s plenty fast enough for general use and gaming and it will even handle occasional video editing and other storage punishing tasks with ease. We haven’t chosen a PCIe 4.0 SSD because the much higher cost is rarely justified and the benefits of the additional theoretical speed really aren’t made out for most users. The Adata Swordfish, therefore, strikes the best balance of price, performance and 2TB capacity. It ships with a 5-year warranty and 960Tb total endurance rating as well as inbuilt AES 256 bit encryption.

The Phanteks Eclipse P400A Digital is an excellent value case including 3 RGB fans and a mesh front panel for optimal airflow. It’s a mid-tower ATX design so it offers plenty of space for components and upgrades but remains more manageable than a full ATX tower. The tempered glass side panel showcases the components within whilst a full suite of dust filters keeps everything clean. Front panel connectors include 2 USB 3.0 sockets and the usual headphone and microphone jack. Build quality is excellent with a PSU shroud, sliding Hard disc trays and good cable management features like tie-down straps and cable channels integrated into the design. A single additional 120MM fan in the top rear position will act as exhaust whilst preserving the 3 fan aesthetic of the front of the case. This Case is a pleasure to build in and look at and provides the airflow to keep everything running cool and quiet.

The total power draw of this system is around 450W peak and we’ve selected a good value and well-specified Power supply to meet these demands. The Antec Earthwatts Gold Pro is a semi-modular design meaning the ATX and EPS cables are permanently connected, whilst you add additional cables to power accessories as required. This build will make use of 2 additional PCIe Cables only to keep the wiring clean and simple. 650W capacity allows headroom for transient loads and also future expansion with a more powerful GPU or additional drives and accessories. It has a quiet operation with a high-quality fan. The PSU uses Japanese capacitors and ships with a 7-year warranty so you can be confident it will last the lifetime of this PC. We’ve been using this Power supply in the Premiumbuilds test bench and have been impressed with its resilience and consistent operation so we have no hesitation recommending it for this build.

The RX 6800 is a high-performance GPU and demands a monitor that’s up to task. The Asus TUF Gaming VG27AQ is a 165Hz 1440p IPS panel that benefits from Freesync. The high resolution of this monitor allows sharp images and more detail, really maximizing the power of the GPU for stunning visual fidelity. Meanwhile, it’s able to keep pace with a GPU and CPU that excel in generating fast-paced gameplay. The IPS panel ensures razor-sharp response times and no motion blur, the perfect combination for serious gamers. The panels color accuracy and quality are well regarded in reviews. If you’re planning to make the most of this latest round of GPU’s you really do need a monitor that displays their full potential and the Asus VG27AQ certainly meets the standard.

If you’re looking to exploit the power of the RX 6800 for the ultimate AAA gaming experience, or want sims like MS Flight or racing sims to really shine then we’d recommend this 34” ultrawide from LG, the Ultragear 34GK950F-B. The Ultrawide experience wraps around you filling your peripheral vision and immersing you in gameplay. Almost all titles are fully compatible and whilst the previous generation of GPUs required you to spend nearly $1000 to properly drive this demanding resolution we’re now seeing GPUs at under $600 that absolutely excel. This 144Hz panel uses AMD’s Freesync 2 to eliminate screen tearing, smooth framerates and maintain immersion. The IPS panel ensures great colour accuracy and response times. This is a high-end monitor and comes with an integrated USB Hub and a sturdy and ergonomic stand. Reviews praise its image quality and response times. We highly recommend this monitor if you want to take full advantage of the power of the Radeon RX 6800 GPU.