Wired VS Wireless Keyboards: Which Is Best for You 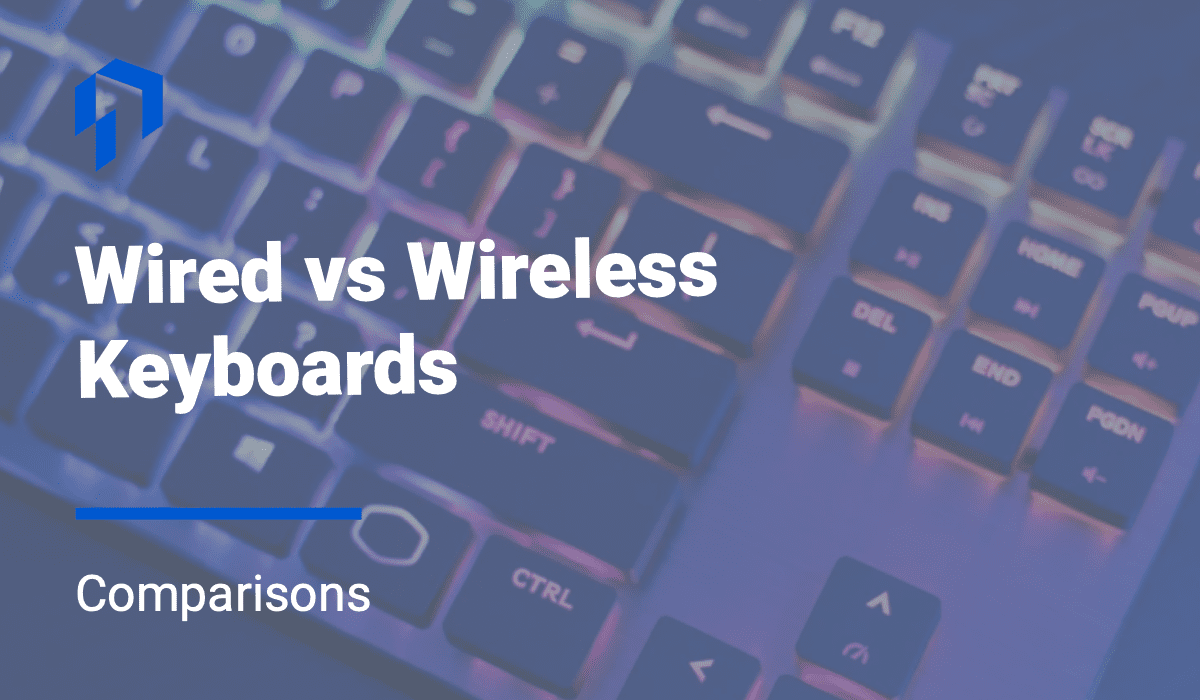 The keyboard is one of the most important parts of any setup. A good one makes every task more enjoyable, from writing and working to gaming. With the quality and number of keyboards higher than ever, one key question remains: wired or wireless?

Everybody has a preference, but perhaps you’re looking at switching things up. Or it’s your first full build and you want everything to be perfect. Whatever the reason, there’s a keyboard out there that’s perfect. It’s hard to go wrong with either option nowadays. The common drawbacks of a wireless keyboard are less significant than before, and wired keyboards come in a plethora of options. So where do you begin?

There are a few key areas to consider when choosing between a wired and wireless keyboard. Let’s dive into some of the major differences and benefits of each before recommending some options.

What Are the Differences?

First and foremost, wired keyboards come with… a wire. It’s a simple difference, of course, but this is where the majority of the differences lie. Extra things like clutter, aesthetics, and latency – three of the major areas that see differences between the two options – rely on the wire (or lack thereof).

We’ve all been annoyed by wires in the past. They can be too short, too long, get in the way – there are plenty of reasons why more and more modern devices cut the wire entirely. Wireless keyboards fix that instantly, often only using a wire when they need to charge. Some of them even cut that out, relying instead on batteries.

Ultimately, no wire leads to less clutter on a desk and improved mobility. These traits are directly tied to one another, but different people will enjoy the benefits. Those of us who are focused on the aesthetics of our desk, or who want the lowest number of wires showing possible, will find the lack of wire comforting. Or, if you move your keyboard around and use it with multiple devices – another option available on many keys – the extra mobility of wireless will come in handy.

This is an area where wireless keyboards take a clear lead. A simple keyboard on a desk will always be easier to fit into a setup than one that needs to find a place for a hidden wire. Of course, other aspects of the keyboard – such as size and setup – also affect mobility. Those of you interested in having the most agile setup should consider additional options to make everything even easier, but most people will enjoy the grab-and-go nature of wireless either way.

No wire also means that, generally speaking, a wireless keyboard is easier to fit into a setup than a wired one. Wires are one part of computers that rarely ever look good, so removing them is a definite step up. However, that’s not to say that there are no nice-looking wired keyboards. In fact, plenty of high-quality keyboards with nice looks are available in either format.

Really, this category always comes down to personal preference. Whether you’re an RGB-head who wants all the colors, or someone who prefers a simple and sleek white option, you can make it work with either type.

This is where the wireless keyboard falters. While not all wireless keyboards suffer from additional lag – in fact, there’s virtually no difference between wired and wireless at the top-end options – it’s a common enough issue that it deserves mention.

With wired keyboards, inputs are transmitted directly through the wire. No interference or meaningful latency can occur unless the keyboard or wire are damaged. It’s an immediate advantage, especially when doing intensive things like gaming or quickly typing. Doubly so if you’re playing games that require precise inputs like shooters or fighting games.

When it comes to wireless keyboards, the story changes. Because signals must be sent through the air, there is always the opportunity for interference. It can come in plenty of different forms – physical objects in the way, distance, other devices operating at the same frequency.

The connection type also matters here. RF keyboards use a wireless radio frequency, like wireless internet does. Depending on the frequency (most use 2.4GHz, like other devices), you are more likely to run into interference. Bluetooth keyboards can suffer from the same issue. Finally, while you may not plan on taking the keyboard far from the keyboard, it is important to consider distance a limitation as well.

Still, it’s important to stress that modern wireless keyboards do a fantastic job of mitigating this. Especially when you hit keyboards in the middle-to-high price points, you’re likely not going to notice any difference. It’s a win for wired keyboards due to better consistency and no possible interference.

This is a simple category with a clear winner. Wireless keyboards have batteries that either need to be charged or replaced. They can die unexpectedly, stop charging, or run into a whole host of issues. While modern keyboards have done a good job of increasing battery life, there’s still little competition here.

On the flipside, wired keyboards just draw power from your computer. It’s also a minimal amount, so there’s no need to worry about overloading a power supply. As with many parts of engineering, simple is better here.

Because they’ve been in production for so long and don’t need more complicated parts to engineer, wired keyboards are available for incredibly cheap. While these aren’t the best keyboards – those are going to be expensive regardless of your choice – those on an extreme budget kind of have their choice made for them.

However, prices are getting closer to one another. Wireless keyboards are more popular than ever, driving the price down. Availability is a non-issue for both types. Outside of specialty keyboards or rare Kickstarter projects, you can find a nice keyboard of either type right now from any tech-store or online shop.

Speaking of those specialty keyboards – they’re expensive but awesome. A quick browse of the mechanical keyboards subreddit will reveal people doing incredible, artisan level work on their keyboards, both wired and wireless. If you’re interested in making your own, we have a guide to getting started here. You can get as crazy with cost as you wish – the prices get close at the mid-level and don’t really separate again. Outside of budget keyboards, this category is definitely a tie.

To start, a disclaimer: best keyboard is always subjective. There are plenty of reasons why someone may love a keyboard that you hate, from the layout to the buttons to the aesthetics. As such, we’re going to keep these few recommendations as objective as possible by focusing on a few key categories:

One final note; both keyboards listed here are mechanical. While not the clear choice for everyone, they are the keyboards of choice for most home and gaming setups. This is because they’re highly responsive and feel good to use. Of course, they may not be the best option all the time – they can be loud and distracting in work settings, for example.

Razer has been in the computer peripheral space for a while now. Their products are some of the most popular around, and for good reason. Although they’ve produced some duds in the past, most of their lineup is consistent and high-quality.

The BlackWidow V3 Pro is one of the best wireless keyboards around thanks to its sold construction and nice keys. As a high-end keyboard, there’s no lag really detectable, and the battery life is solid.

It comes with a host of features including multi-colored RBG lighting (that can be turned off) and multiple device connectivity. It’s a great option for those looking into wireless keyboards but be warned that it is expensive. While there are cheaper options out there, few offer the support and full features of this choice.

Drop is a smaller company than Razer but produces high-quality mechanical keyboards on a relative budget. The ENTR is a great tenkey-less option that sits comfortably and is easy to use. It has a nice aesthetic that can match with almost any setup that’s complimented with white LEDs – no RGB spectrum option here.

The main appeal of this keyboard is what you get for the price. Simply put, it’s one of the best mechanical keyboards on the market, especially for under $100. While it doesn’t have too many bells and whistles, it’s more than enough for most people. Plus, it has all the nice solidness of a wired keyboard.

There’s no clear answer to wired or wireless keyboards. Both are fantastic builds that offer a host of options and feel good to use. For most people, the final decision comes down to aesthetics or consistency. While wireless keyboards have improved to being effectively the same as wired keyboards, they still fall behind in latency and power usage.

It’s all personal preference, but you should consider what you need the keyboard for most. There’s plenty of value in having a device that you don’t need to charge and cannot face interference, but mobility is important as well. Consider how you use the device and your preferences first.

Interested in learning more about keyboards and seeing what we love? We’ve written some more guides and comparisons to check out below: