Western Digital Black SN850 vs Samsung 980 Pro: Which is Best? 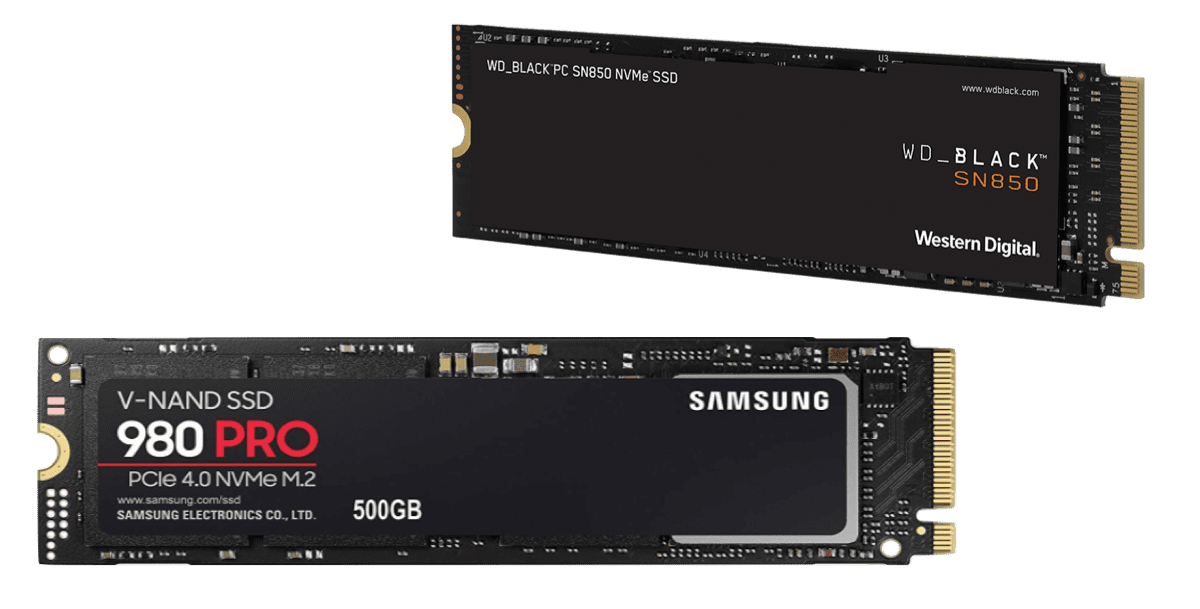 Third generation PCIe lanes are all but obsolete, as Intel is finally including PCIe 4.0 support with their new 11th generation Rocket Lake-S processors, and their accompanying Z590 motherboards. Now, fourth generation PCI express compatible SSDs may be overkill for the majority of builds, but they are soon to become the new norm as their prices begin to drop further.

Two excellent options to opt in to the new era of PCI express lanes and take advantage of its 16 GB/s speeds are the Western Digital Black SN850, and the Samsung 980 Pro. The former with its proprietary NVMe 1.4 interface and its in-house second-generation controller, and the latter with its 128 worldline layer 3D TLC NAND flash memory and Elpis controller: two high-end SSDs made by two of the most reliable PC-storage manufacturers in the market.

Since their prices are very similar, let’s take a look at what makes each of these two models unique, and see whether we can declare a winner in this PCIe Gen 4 NVMe SSD comparison.

Considering each SSD’s storage size options, we see that the WD Black SN850 500 GB model has a slightly quicker sequential read speed (1.44%), but it trails in all other aspects to the Samsung 980 Pro; except for 4KB random read speeds where they perform equally. It falls behind to the 980 Pro substantially in sequential and 4KB random write speeds, by 22% and 75%.

The 1 TB version of the Western Digital SN850 has the best performance of all storage-size versions, outperforming the 1 TB Samsung 980 Pro in sequential write speeds by 6%; but still falling short in 4KB random write by 38%, which is still a significant margin.

Similar is the case with the 2 TB variant, which has equal sequential read and write speeds, equal 4KB random read, but once again falls short in 4KB random write by 41%.

All endurance ratings are equal, with a respectably high Terabytes Written (TBW) values for both NVMe SSDs. To put their values into perspective, if you were to write 30 GB of data per day, it would take you 30 years to get through the 300 TBW rating of the 500 GB versions of these models, so, for the vast majority of users, this will hardly become an issue. Both SSDs are also backed by their manufacturer’s 5-year warranty.

Let’s check their benchmarks to see which SSD offers better value for its asking price.

Benchmarks are actually surprisingly good for the 1 TB Western Digital Black SN850, as it outperforms the 1 TB Samsung 980 Pro in most results, only falling short in peak sequential read speeds – though by less than 1%. Perhaps the biggest upset is the peak 4K random write speed, where it should trail the Samsung 980 Pro by 38%, yet it ends up faster by 3%. Also, the WD SN850 achieved a 11% higher score in the PC Mark 10 Full System benchmark: which is a trace test meant to simulate widely used applications for typical home user workloads, including photo or video editing, and even gaming.

That being said, the 980 Pro does prove its value in the SPECworkstation 3 tests: a benchmark that measures performance for professional, workstation, applications. It is here where the Samsung 980 Pro scores significantly higher than the WD SN850, with 6.25 points versus the SN850’s 5.10 points – a 23% difference. The 980 Pro was also able to load the Final Fantasy XIV StormBringer benchmarks faster, but the difference is low enough to be within the margin of error.

All in all, both SSDs offer excellent performance in two distinct modes of application. Firstly, the WD Black SN850 excels in everyday home-PC use, as it has fast transfer speeds, quick loading times, and low latencies for better responsiveness. It is a great unit to install your PC’s operating system, or it can be used just as well as a second storage drive meant for installing storage-demanding games or storing large files. Especially for its 500 GB and 1 TB versions, the WD Black SN850 has an exceptional price to performance ratio, outperforming the Samsung 980 Pro in home-user workloads, and costing $10 less as well.

On the other hand, the Samsung 980 Pro offers superior workstation performance, which is what PCIe 4.0 SSDs are meant to operate. Its 2 TB version appears to be the best of its storage-variations, given its price and overall performance.

The final result of this comparison is the declaration of a tie, as the 500 GB and 1 TB versions of the WD Black SN850 will be the better purchase for the majority of PC builds, while the 250 GB and 2 TB Samsung 980 Pro models offer better value for their price – especially for workstations setups. All in all, two excellent SSDs by two well-known and respected SSD manufacturers.