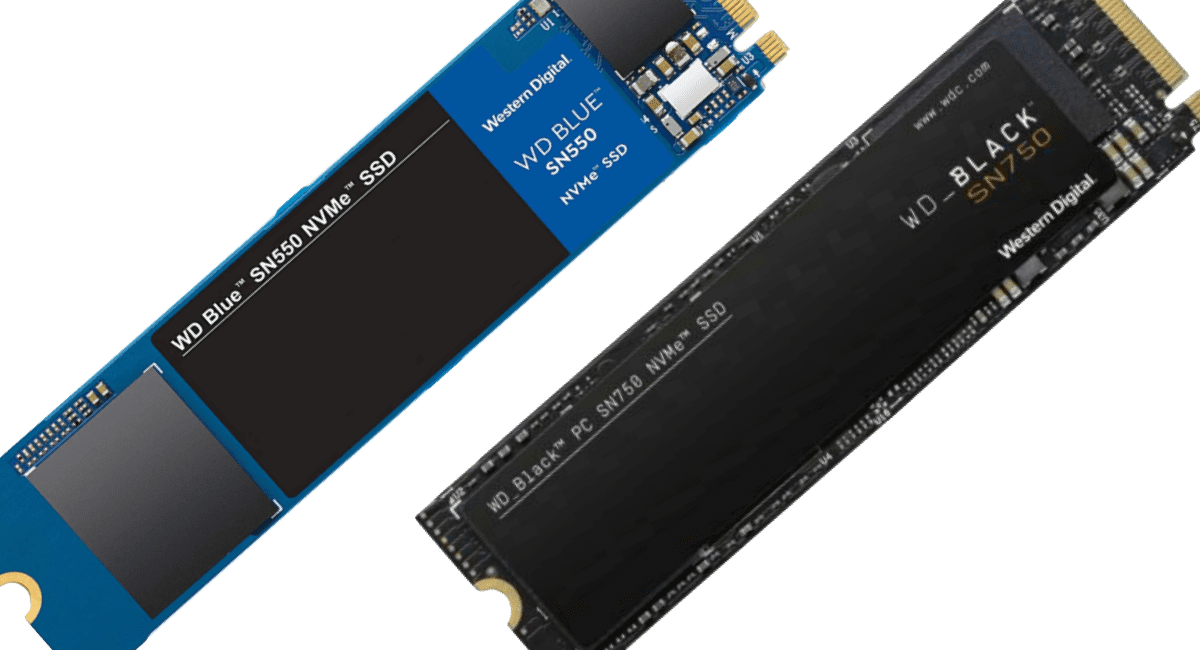 Western Digital has been making quality hard drives for decades, and its more recent NVMe SSDs are no exception. Their latest release, the PCIe Generation 4 NVMe Black SN850, for example, outperforms even Samsung’s latest 980 Pro in several benchmarks.

But if you are not looking for a hard drive for a dedicated workstation build, where you will need to transfer large files regularly, then a PCIe 4.0 SSD will hardly provide you with any additional benefit to a previous generation PCIe 3.0 NVMe SSD – or even a SATA III drive for that matter, as Crucial’s MX500 was proven to load games faster than the NVMe Samsung 970 EVO, and even Crucial’s own P1 model.

Upgrading your setup with an M.2 SSD has never been better, as PCIe Gen 3.0 NVMe technology has peaked, and their prices are at a record low. Since their performance for applications and gaming are almost equal to their newer counterparts, purchasing one at this point is almost a no-brainer.

Of course, the price drop of these SSDs is also a product of the oversaturation of hard drive market, with brands like Samsung, Crucial, ADATA, and even Gigabyte all trying to capitalize on the ever-growing need for extra storage. Western Digital, however, has always been a reliable choice, and they do currently have two excellent storage drives on sale: The Blue SN550, and the Black SN750. The former SSD is a newer model, aimed to attract entry-level builds with low transfer demands, while the latter makes full use of the PCIe Gen 3 interface and is meant for more demanding workstation setups. Given that the Blue SN550 is currently on sale by 23%, while the Black SN750 is 46% cheaper than its original price-tag, the only question is: which is the better investment?

To answer this question, we will analyze their full list of their manufacturer-provided specifications, as well as real-world benchmarks that give us a better picture of how these SSDs actually perform.

Other than the fact that the Western Digital Black SN750 also offers a 2 TB option, that is missing from the Blue SN550, the main differences between the two pertain to their read and write speeds. Their interface is the same, both SSDs have Western Digital in-house controllers – that are based on the same architecture, both have similar TLC NAND memory types, and both have more or less the same TBW ratings which are backed by a 5-year warranty.

The Western Digital Blue SN550 is inferior to the Black SN750 in sequential read speed by 44%, sequential write speed by 53%, and 4KB read and write speeds by 25% and 38% respectively. It is this gap in performance that is responsible for the difference in price between the two SSDs; with the Western Digital Black SN750 costing 2.5 times more than the Blue SN550 initially. But even now, with its 35% higher price-tag, is the Black SN750 worth the extra investment? Only the benchmarks can truly tell.

And the benchmarks do confirm what WD stated in their specifications: the difference in read and write speeds range anywhere between 28% to 50% – which is a considerable margin. However, where the Western Digital Blue SN550 holds its own is the application tests; like PC Mark 10 and SPECworkstation. PC Mark 10 is meant to simulate light PC use, and in these benchmarks the Blue SN550 actually outperforms the Black SN750 by an incredible 31%. For SPECworkstation 3, which pushes the system much harder in an attempt to simulate workstation applications, the Black SN750 does outperform its cheaper counterpart, but only by about 11%. Additionally, the Blue SN750 was also able to load stages faster than the Black SN750 for both games tested by Tom’s Hardware: Final Fantasy XIV StormBlood and ShadowBringer.

Going back to the question on whether or not the Western Digital Black SN750 is worth its $135 price-tag, the answer is: it depends.

If the hard drive’s task relates to gaming, browsing, or work applications that don’t require moving around large files, in quantity and size, then the Western Digital Blue SN550 is a much better deal. It can perform in any of these aspects just as well, or even better, than the Black SN750.

Then again, if you need to be moving files around, which will almost always be the case when it comes to video & photo editing, then the Black SN750 is an excellent SSD that pushes PCIe’s 3rd generation interface to its limits; and it does so at a reasonable price.