Samsung Odyssey Neo G9 vs Odyssey G9: What are the Key Differences? 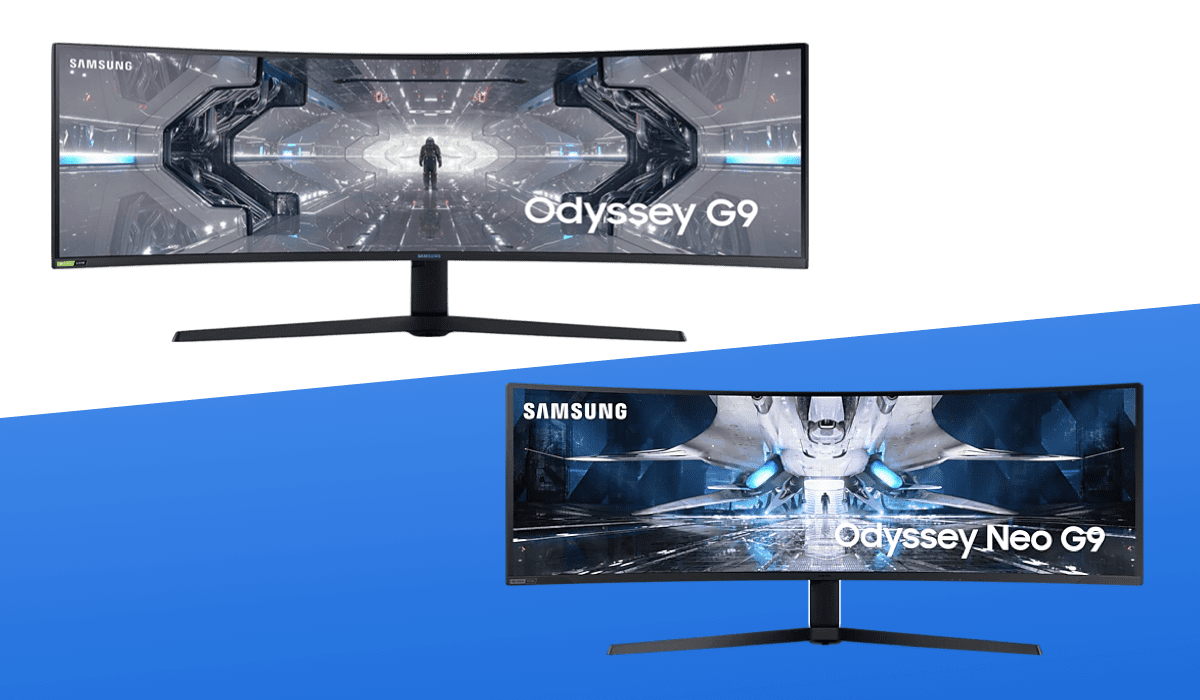 Samsung’s been an innovator in the monitor sphere for years now, pushing the boundaries of both professional and gaming monitors. Offering monitors across the spectrum of budgets, their best work comes at the high-end. While offering some of the most expensive monitors we’ve ever seen, Samsung’s also pushed gaming monitors to new heights. This was true of the original Odyssey G9, and the new Odyssey Neo G9 continues the tradition. Both monitors feature an incredible 49”, 5K ultrawide screen with everything a gamer could need. 240Hz refresh rate, 1ms response time, plenty of connection points, picture-by-picture – both offerings are simply top of the line. So, what are the differences between the two?

The first and most notable difference between these screens is their LED structure. The newer Odyssey Neo G9 is a Quantum Mini-LED monitor. As the newest monitor change on the block, mini-LED technology has received plenty of hype in the past, and it generally lives up to it. Featuring massively better contrast ratios, absolutely no backlight bleed, and better HDR, it offers one of the most significant changes to panels since QLED. Speaking of – the original Odyssey G9 utilizes this slightly older QLED technology for its massive panel. To make it clear, it’s not that this technology is bad. By all accounts and metrics, the G9 is still a cutting-edge monitor. The release of the Neo G9 could easily be thought of as Samsung simply flexing its technological muscles.

Neither of these monitors offers any compromise, and they are certainly not budget options. In fact, they are two of the most expensive monitors on the market, both retailing at $2500. The price of the Odyssey G9 has decreased slightly due to the release of the Neo G9, but it will still run consumers over $2,000. So what justifies the extravagant price tag? And, more importantly, does the release of the Samsun Odyssey Neo G9 make the Odyssey G9 defunct?

The original Odyssey G9 was Samsung’s first foray into combining their professional and gaming monitor’s technology into one, beautiful package. They succeeded, putting forward an incredible 49” screen packed with just about every feature someone could think of. The QLED panel gets bright, features a 5K resolution, 240Hz refresh rate, and 1ms response time. Putting together a rig that can take full advantage of this screen is already a monumental task, so the extra $2500 might not make much of a dent.

One of the only weak points on this monitor is the contrast ratio. With a static contrast ratio of 2500:1, it offers fine functionality, but plenty of room for improvement. Users largely report that this is noticeable during scenes or games with deep blacks or lots of shadows. While the peak brightness of 1,000 can help with some of the problems, it’s not the optimal solution, and certainly not usable long-term. The other detriment is backlight bleed. Backlight bleed is when an LED or QLED panel “leaks” light from the sides due to uneven lighting. While not present on every model of the Odyssey G9, it is a common complaint among buyers that feels cheap given the hefty price tag.

There’s no gamer out there who could complain about the speed of this monitor, however. It’s rare to find 4K panels featuring 1ms response times and 240Hz refresh rates; the Odyssey G9 offers both in 5K. The 5k resolution is equal to running two 1440p monitors side-by-side. The panel is also NVIDIA G-Sync and AMD FreeSync Premium Pro certified for buttery smooth frames regardless of your GPU manufacturer.

The 1000R curvature is significant, but not overbearing. This is likely due to the size of the monitor; on a smaller screen, the dramatic curve could easily be too much. Instead, it works to draw your eyes in and immerse you in the gameplay. Alternatively, the screen easily splits into the equivalent of three normal-sized panels. This makes it great for working or playing games while catching up on some Netflix at the same time (or all three!). Samsung’s also included picture-by-picture and picture-in-picture, allowing you to show two different sources at once.

Port selection is more than enough to make the screen serve as the hub of an entertainment center. 2x Display Ports, 1x HDMI, 1x USB Hub, and 2x USB Ports. It also includes a 100 x 100 mount option for taking it off the stand and clearing up some desk space.

The Samsung Odyssey Neo G9 seeks to improve on everything the original Odyssey G9 introduced. Almost everything remains the same, besides one key feature. As mentioned before, the biggest difference between the two monitors is the new mini-LED panel on the Neo. Among other things, it dramatically improves the contrast ratio and solves the problem of the backlight bleeding that was common in the original.

The static contrast ratio on the Neo G9 is 1,000,000:1. To note how much of an improvement that is over the original, its static contrast ratio is 2500:1. Deep blacks and proper color notes are basically guaranteed on this monitor. The sharp increase in contrast is thanks to the mini-LED technology, which changes the way that the LCD screen is lit. Because the LEDs are mini, more of them fit, giving the monitor more control over how bright it can get. This translates to brighter highs and darker lows while simultaneously fixing the backlighting problem.

Notably, better backlighting from mini-LEDs also improves HDR on the monitor. Samsung’s Quantum HDR2000 utilizes the new brightness to improve colors while retaining the 240Hz refresh rate and 1ms response time. In a market with plenty of HDR options that disable the advanced gaming features, it is a fantastic upgrade that does upgrade the feel of using the display.

Most other parts of the Neo G9 resemble the original. The connection ports have been slightly upgraded to include a headphone jack, and the Infinity Lighting system can now sync with your monitor to match the action. A feature called Auto Source Switch+ automatically detects when new devices connect and switches input, letting you get right into the action quicker. It’s a nice upgrade for certain users, but certainly not the star of the show.

Perhaps what’s most impressive about the Neo G9 is that it retails for the same price as the original Odyssey G9. Mini-LED technology is relatively cheap to produce, so Samsung was able to keep the same price point while upgrading the small issues with the original. This is fantastic news for consumers now and in the future when mini-LED technology becomes more common.

The Odyssey Neo G9 offers a rare strict upgrade over the Odyssey G9. Taking a flagship monitor and improving the only complaints people had about it and releasing it for the same price is a notable move for a company of Samsung’s size, and it should be commended. It would likely have been easy for them to increase the price even further and claim the monitor as part of the future. Instead, they left it at the exact same MSRP, leaving only one question behind: what happens to the original Odyssey G9 now?

Truthfully, I expect the Odyssey G9 to fall out of production and stock quickly. Unless we see dramatic price drops, there seems to be simply no reason to choose it over the Neo. While some drops have already started, the monitors are still within a few hundred dollars of each other. That’s notable at lower price points, but users will end up paying at least $2,200 anyway – is far better contrast and no backlight bleed worth the difference? For most users, the answer is a resounding yes.

With that said, if the price of the Odyssey G9 drops below $2,000, there is certainly a conversation to be had there. It is still a blazing fast monitor that offers incredible specs, after all. The only reason it’s not at the top of most lists of the best monitor anymore is the release of the Neo G9. Keep an eye out for deals if you’re in the market for a massive workstation replacement.

Want to see how the Samsung Neo Odyssey G9 lines up against other great ultrawide monitors? We’ve got you covered with comparisons between other heavyweight contenders: