Samsung Odyssey G5 vs Odyssey G7: What Are The Differences? 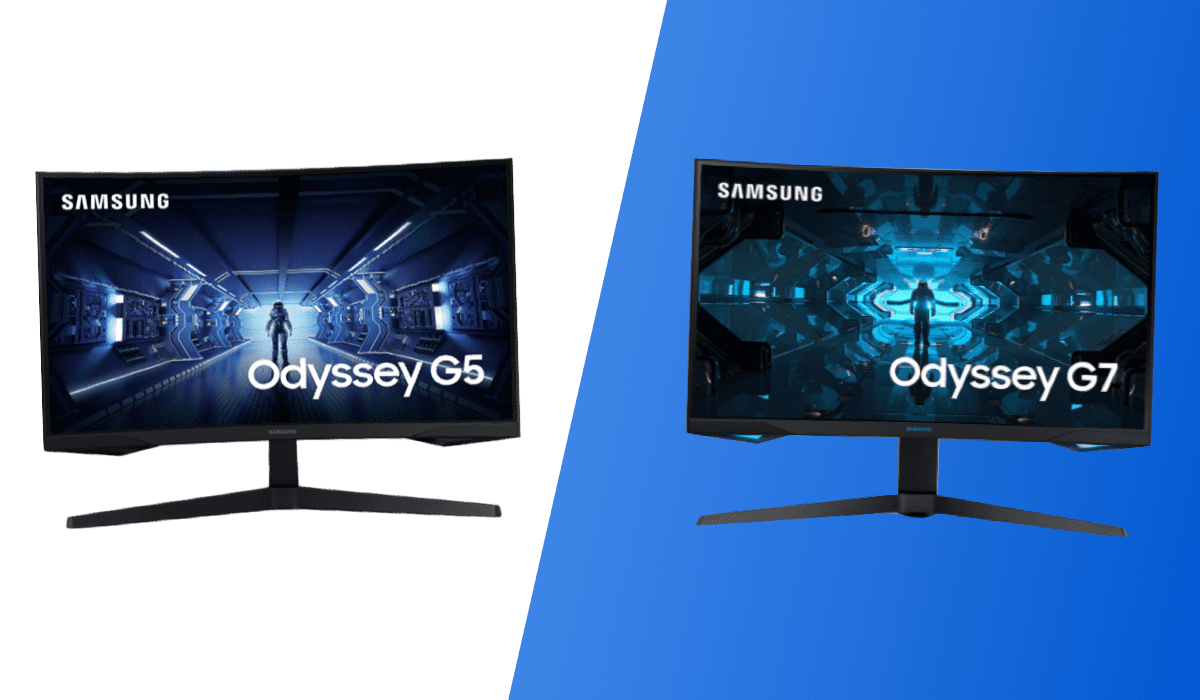 Choosing a 1440p 144+ Hz monitor seems like a no-brainer, given the increase in performance found in new-generation hardware, as well as the decrease in price that some of these monitors have been given.

If you prefer curved monitors, then few can compete with Samsung’s Odyssey series, especially in the 27-to-32-inch screen-size range. These monitors have an aggressive 1000R curvature, that is scarcely found in any other gaming monitors, and the Samsung Odyssey G7 also features Samsung’s proprietary Super Vertical Alignment (SVA) panel – which improves on many of the shortcomings found in standard VA panels, like the one found in the Odyssey G5.

The Odyssey G7 is often discounted and can be found for under $500 at major retailers. However, this is still about $200 (67%) more than the Odyssey G5, so, the following question arises: Is the Samsung Odyssey G7 a large enough upgrade to warrant the much higher investment it requires? Additionally, is this monitor’s specifications necessary for most PC setups, or would the Odyssey G5 the offer better value for its price?

To find out, we will compare both options, in every aspect relating to a monitor’s performance, and reach a conclusion on which model better deserves to become the outlet for your PC’s graphical processing power.

When it comes to their external looks, these two monitors are very similar: they have a textured backside cover, a V-shaped stand with a cutout hole for better cable management and a black, matte, anti-glare finish on the anterior. The Samsung Odyssey G7 still does stand out versus the G5 in that it has a tall stand, and an RGB-illuminated ring at the junction where the stand connects to the monitor. The front side of the G7 also has two RGB lit accents (at the bottom of the bezel), so its lighting displays are also visible from the front.

The resolutions may be identical (both being 1440p) but the Odyssey G7 has a significant advantage when it comes to its refresh rate. Of course, this may not be relevant to everyone, as single player, triple-A, gaming-titles will hardly reach such high framerates; even with the best hardware components the consumer market has to offer. In fact, benchmarks from Techspot show that the best performing GPU at 1440p (the Radeon RX 6900 XT) only reaches an average of 169 FPS, while the popular upper-mid-range Nvidia GPU, the GeForce RTX 3080, only averages 153 FPS. That being said, the 240 Hz framerate is excellent for less-demanding competitive multiplayer titles, like DotA 2, Counter Strike: GO, or Valorant, where 240 FPS is a far more realistic framerate to achieve.

Viewing angles are a weak point of VA panels, though Samsung’s SVA panel (found in the Odyssey G7) does fare better than the standard VA panel of the Odyssey G5.

Though both monitors are advertised as having a 2,500 : 1 static contrast ratio, they both do prove to reach higher levels when benchmarked. The Samsung Odyssey G5 was found to have a native contrast of 2,997 : 1 by rtings.com, while the Odyssey G7 was measured to have an impressive 3,912 : 1 ratio by the same website. Though it may seem that the Odyssey G7 has the advantage in this regard, these measurements are highly dependent on the specific tested unit, so the results will vary for each monitor shipped.

SDR and HDR peak brightness levels of these monitors range from great to mediocre, though the Odyssey G5 is once again eclipsed by the Odyssey G7, by a significant margin.

Making use of the Frame Rate Control (FRC) control function – which cycles through color tones quickly enough to create the illusion that more intermediate color tones are also reproduced – the Odyssey G7 has a 10 bit panel depth, which makes it capable of displaying over a billion different colors; while the Odyssey G5’s 8-bit panel depth can only reproduce 1.67 million colors.

Another aspect in which the Odyssey G5 underperforms, especially for competitive gamers, is its response times. Both monitors have three overdrive settings: Standard, Faster, and Fastest. The higher the overdrive setting, the less the response time, but the more the overshoot error increases – which is the blurry trail seen in fast-moving on-screen objects.

At its native resolution and refresh rate, the Odyssey G7 has a total response time of 7 ms with 5.5% overshoot error on the “Faster” overdrive setting, while at 60 Hz – surprisingly enough – the response time drops, instead of increasing, to just 6.9 ms (with an overshoot error of 7%). On the same overdrive setting (Faster), the Odyssey G5 has a 14.7 ms response time (at its native resolution and framerate), which increases to 18.2 ms when running at 60 Hz. This is especially important for those that enjoy fighting games, as they are capped at 60 FPS by design.

When it comes to input lag, the Odyssey G7 has some of the best values seen at its price range. It displays only 2.7 ms of input lag at its native resolution and refresh rate, which increases to 3.1 ms with VRR enabled. At 60 Hz this input lag increases to just 9.6 ms (12.7 ms with VRR). The Odyssey G5 also has an excellent input lag value at its native resolution and refresh rate, one of just 4.2 ms (4.6 ms with VRR), though this value goes up considerably at 60 Hz, where it was measured to reach 23.5 ms – more than double that of the Odyssey G7. With VRR enabled at 60 Hz, however, it did decrease to 9.7 ms at 60 Hz.

Curved screen monitors are meant to be viewed from the front, which is why having ergonomic versatility is always a plus, as they can be adjusted to attain the best position available, for their rather narrow viewing angles, depending on where they are situated.

The Odyssey G7 does not disappoint in this regard, as it can have its height adjusted by 120 mm (~4.72 inches), it can pivot between landscape and portrait orientations (by moving clockwise by up to 90 degrees), it can swivel – to the left or right – by up to 15 degrees, and it can tilt forwards by 9 degrees & backwards by 13 degrees.

Unfortunately, the Odyssey G5 has very little ergonomic flexibility to mention, as the monitor can only tilt backwards by 18 degrees.

The reason why the Samsung Odyssey G7 pulls ahead in yet another category, is because it features two USB 3.0 downstream ports – which are meant for plugging in peripherals, like your keyboard and mouse, in order to save your PC’s USB ports and provide you better cable management –and it has better overall display connectivity. It has one HDMI 2.0 port, two DisplayPort 1.4 sockets, and a 3.5 mm audio-out jack. The Odyssey G5 has no such USB 3.0 ports, and for display connectivity it only has one HDMI 2.0 and one DisplayPort 1.2; together with the standard 3.5 mm audio jack.

Both of these options are feature-rich, and offer most of the same additional software functions that most Samsung monitors offer: like a Black Equalizer, Flicker-free Technology, an Eco Saving Plus mode, a Low Blue Light filter, a Low Input Lag mode, a Game Mode (crosshair and timer overlays), Off Timer Plus, and the Super Arena Gaming UX OSD interface. The Odyssey G7 also has the Mega Dynamic Contrast feature, RGB compatibility (for its illuminated displays), and a Smart Eco Saving option.

Where the Odyssey G7 pulls ahead is its Picture-in-Picture (PIP) and Picture-by-Picture (PBP) functionality – which can be incredibly useful for gaming and productivity applications. These features allow for a second device to be connected to the monitor simultaneously. With PIP, the second device is displayed via an inlay window, while with PBP, the screen is split in two, with each device occupying its respective half.

So, is the Samsung Odyssey G7 worth its 66% higher price? Surprisingly enough, it does appear so. It outperforms the Odyssey G5 in every single category relating to a monitor’s performance; perhaps with the only exception being its static contrast ratio, where it could be argued that depending on the units provided, the monitors may function on an equal level.

Samsung’s SVA panel offers amazing performance enhancements that cannot be dismissed as extra fluff. Even when it comes to basic, necessary, functionality – like input lag and response times that are particularly important for competitive gamers – the Odyssey G7 is far superior to its predecessor, the Odyssey G5. If the curvature of the screen is what attracts you to the Samsung Odyssey series of monitors, then there are few options that can compete with the G7, especially for its discounted price.

That being said, if you don’t mind the monitor’s curvature, and aren’t looking to pay $500 for a gaming monitor, then other 1440p 144+ Hz options do exist that offer better value for their price, even when compared to the Odyssey G5. One such monitor is Gigabyte’s exceptional M27Q.

If the choice is strictly between the Samsung Odyssey G5 and the Odyssey G7, then the latter monitor is the victor of this comparison; with a large enough gap to warrant the extra investment necessary for its purchase – which will be money well spent, given that the Odyssey G7 allows more than enough of a performance leeway for future upgrades to your PC hardware to make use of its high performance potential.