Sabrent Rocket vs Samsung 970 EVO Plus: Which NVMe SSD is Best? 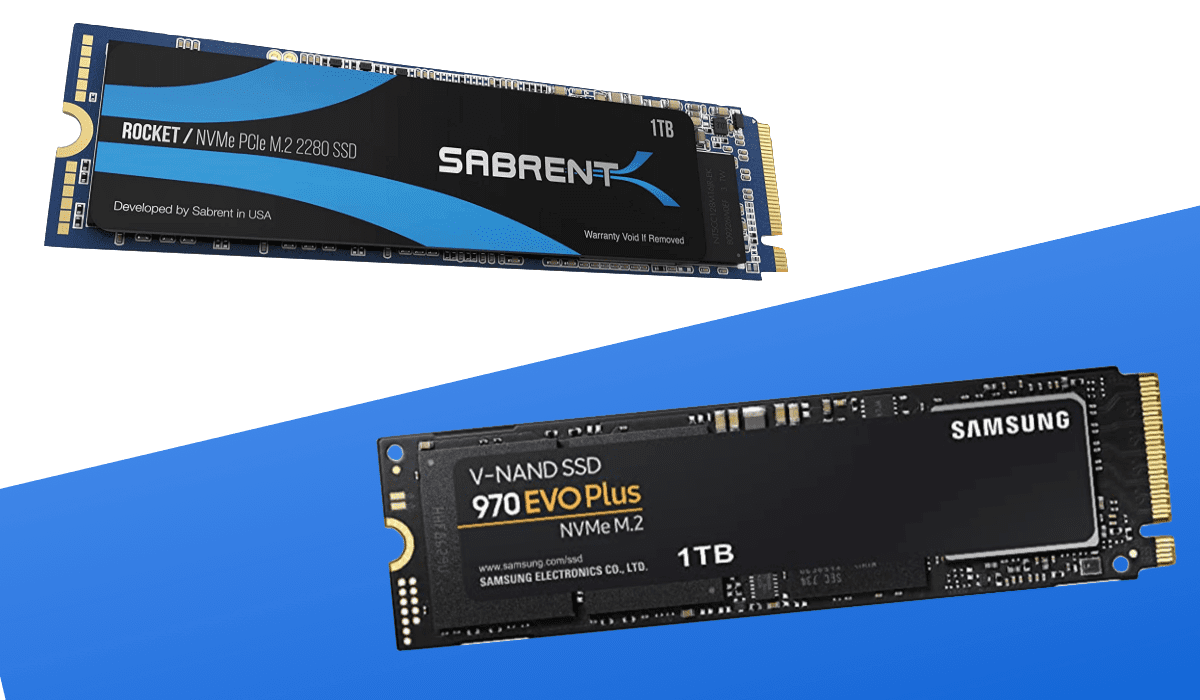 If you, too, are looking to take advantage of the recent price drops for the mid-to-high-end PCIe 3.0 NVMe SSD models, now that the transition to PCIe 4.0 lanes is taking place, then few are the options that really do provide the best value for their price. For gamers, light photo or video editing, and general browsing or productivity applications, these SSDs are ideal; as they offer high performance at a reasonable price.

Two such models are the Sabrent Rocket, and Samsung’s own 970 EVO Plus. Given that the 970 EVO Plus has seen a 34% price decrease, when compared to its initial MSRP, makes now a great time to invest in this SSD for your next build – or even as an upgrade to an existing setup. But how does the 970 EVO Plus perform in comparison to the Sabrent Rocket? Does it justify its price, or does Sabrent offer more value at a lower cost? To answer these questions, we will compare both options, in terms of manufacturer specifications and real-world benchmarks, and reach a verdict on which SSD we recommend as the best option for your next storage purchase.

Comparing the advertised specifications, there are little significant differences between the two models, at least when it comes to the one terabyte versions. The Sabrent Rocket does have a 4 TB storage unit, which the Samsung 970 EVO Plus lacks, and the Rocket’s two smaller options (256 GB and 512 GB) trail the 970 EVO Plus in sequential write speeds by a sizeable margin. To be more specific, the 256 GB version has a 119% slower sequential write speed, a 49% slower 4K random read speed, and a 115% slower 4K random write speed. The 512 GB version also falls behind with a 60% slower sequential write speed and a 34% slower 4K random read speed. Other than that, the differences between the two SSD models are minimal; though we do also see a dip in performance for the 2 TB version of the Sabrent Rocket compared to its own 1 TB and 4 TB variants.

In terms of endurance, the Sabrent Rocket is far superior to the Samsung 970 EVO Plus, as it boasts Terabyte Written (TBW) durability that is 153%, 160%, 178%, and 160% higher for each storage size version respectively, from smaller to larger. That being said, even 150 TBW or 300 TBW values are high enough so that the vast majority of users would need more than a decade to even come close to reaching. Of course, having such high endurance metrics as the Sabrent Rocket is great for professionals that transfer large files on a regular basis.

Price-wise, the Sabrent Rocket is also significantly cheaper than the Samsung 970 EVO Plus, with a price difference ranging between 33% for the 250 GB version, to 22% for the 2 TB version. It would be a tall order for the 970 EVO Plus to outperform the Sabrent Rocket by such an equivalent margin, but it is plausible. So, let’s check the actual real-world benchmarks of these two SSDs and see whether or not Samsung’s storage drive can do the deed.

For the 2 TB version of the Sabrent Rocket, which is advertised as being the weakest of the high storage variants of this SSD model, we see only minor differences in the sequential read and write speeds when compared to the Samsung 970 EVO Plus. Namely, the latter has a 3% faster peak sequential read, and an 8% faster sequential write speed. In terms of 4K random read and write speeds – despite having lower advertised metrics – the Sabrent Rocket was found to be faster by 17% and 10%.

When it comes to benchmark applications, like PC Mark 10 (Full System and Quick System), Anvil, or even AS SSD, the Sabrent Rocket outperforms its Samsung counterpart by a significant margin – the largest of which being the PC Mark 10 Quick System score. In this test, it outperforms the 970 EVO Plus by a massive 107%. These testing programs are meant to apply stress to the storage units, simulating widely used functions and applications – and the PC Mark 10 Quick System benchmark would be most in tune with the demographic that both these SSDs are aimed for. That being, non-professional users and gamers. The fact, however, that the Sabrent Rocket scores higher even when stress tested for professional application standards simply adds more to its inherent value.

Going back to the initial question of whether or not the ∫ is worth its price, when compared to the Sabrent Rocket, the answer is a definite “no” –at least at 1 TB and above.

The 970 EVO Plus outperforms the Rocket only slightly in sequential read and write speeds, yet falls behind severely when it comes to running real-world applications. Especially for home users, the Sabrent Rocket is one of the best performing PCIe 3.0 NVME SSDs in the market.