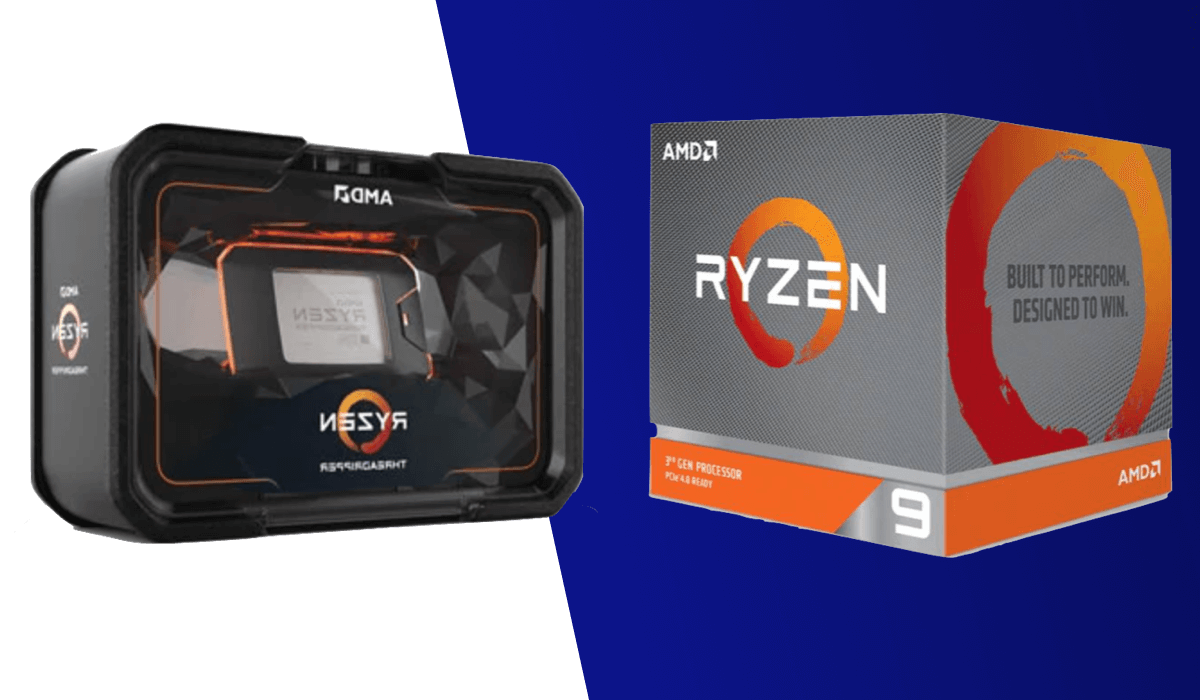 Most people consider the act of picking the right processor for your new PC build as trivial as finding the one with the highest clock speed for what you need.

However, there are times when two processors might not look worthy of comparison but actually serve completely different purposes. A great example of this is the debate between the new Ryzen 3950X or their older Threadripper 2950X.

While it might look like the newer Ryzen 9 3950X is the clear winner, there are still a few things to consider based on what you want to use your computer for.

Let’s take a closer look at the precise specs and comparisons between the two and work out, which is the better one to pick up in 2020.

Just from looking at the spec comparison chart at a first glance, there is a clear winner when it comes to overall clock speed; the 3950X.

While they share the same base clock speed, the 3950X has a clear higher max boost, while also having a higher cache. This not only results in the CPU being able to process data faster, but it also means it can store and retrieve more data as well with such a sizeable L3 cache.

However, this doesn’t mean that the 3950X is necessarily the clear winter – the Threadripper 2950X boasts almost triple the number of PCIe Lanes, as well as being quad channel configured, rather than the dual channel configuration of the 3950X.

We’ll get into why this is so key in a second, but let’s take a look at some benchmark comparisons first.

Examining the most common benchmarks between the two AMD processors, a clear trend starts to emerge.

CPU User Bench Mark puts the 3950x at excelling in literally every single category by at least 14%.

With faster core speed, no matter if it is single, 2-Core, 4-Core, or 8-Core, as well as being faster when over clocked to almost the same degree. The 3950X is essentially better and faster in every single metric when compared using benchmarks, yet purchasing of the 2950X has stayed pretty static since its release.

While the market share (a great way to infer the total number bought when compared against another) of the 3950X has dramatically risen since its release, peaking at a soaring height of 0.28% in January 2020, the Ryzen TR 2950X has somehow remained incredibly steady since its release in August 2018.

While it never reached the dizzying heights of the 3950X, it has stayed pretty constant at 0.04%, meaning that people are still steadily buying the seemingly lesser quality and slower Threadripper 2950x over the ‘better’ Ryzen 9 3950x.

The most obvious reason that people are still buying and sometimes prefer the slower Ryzen Thread Ripper 2950X is because of the price.

While it may only be $100 cheaper, being able to get effectively the same clock speed minus a few points on the boost speed for $100 less is a great bargain for many people.

Plus, not everyone uses the frankly obscenely high quantity of caches in the 3950X. While having higher cache numbers is better, especially for the L3 cache as the 3950X does, it only really starts to affect minute differences in data processing.

When you are playing a high intensity game, no matter how visually and computationally complicated it is, you probably won’t notice the almost infinitesimal delay that the 2950X will give you when compared to the 3950X.

Unless you are a complete hardware purist, desiring only the very best gear no matter what, the fundamentally small differences won’t really be noticeable.

So, for those people that want a functional and still high quality CPU, saving $100 for functionally the same product is worth it.

However, there is also one other class of computer users that would definitely prefer the 2950X over its faster cousin, niche users.

When you look at the spec comparison chart between the two CPUs, there is a clear discrepancy is the assumption that the 3950X is better in everywhere; the PCIe lanes and its memory configuration.

PCIe lanes can be pretty complicated to understand, but they are essentially the number of PCIe slots that your computer can utilize. Having more PCIe lanes means that your CPU can support more devices. This is especially useful for those using a RAID setup for their data storage, or for those using a multi-GPU setup.

Furthermore, having a quad channel memory configuration means that you can get more memory bandwidth for your processing. For those that plant to use their PC for memory intensive functions such as video editing or GPU rendering, they might prefer the 2950X for this higher memory bandwidth.

The issue with trying to decisively recommend a CPU for anyone making a new build is that it is impossible to know what you are planning to do with your machine.

While most people might just want to use their new hardware to enjoy the latest games, some others are looking to enjoy more niche interests, such as video editing or programming.

For those that just want to enjoy intense games with the higher computational power necessary to really play them, then the Ryzen 9 3950X is definitely worth it. While it is the pricier option of the two, it also guarantees a better clock speed, plus a better fundamental architecture that makes playing CPU intensive games a much smoother experience.

However, for those looking to use their PC for video editing, programming, or any other more memory intensive, slightly more niche hobbies, then you could just as easily get by with the 2950x. It might not be as fast as the 3950X, but you will definitely appreciate the better memory configuration when you need it.