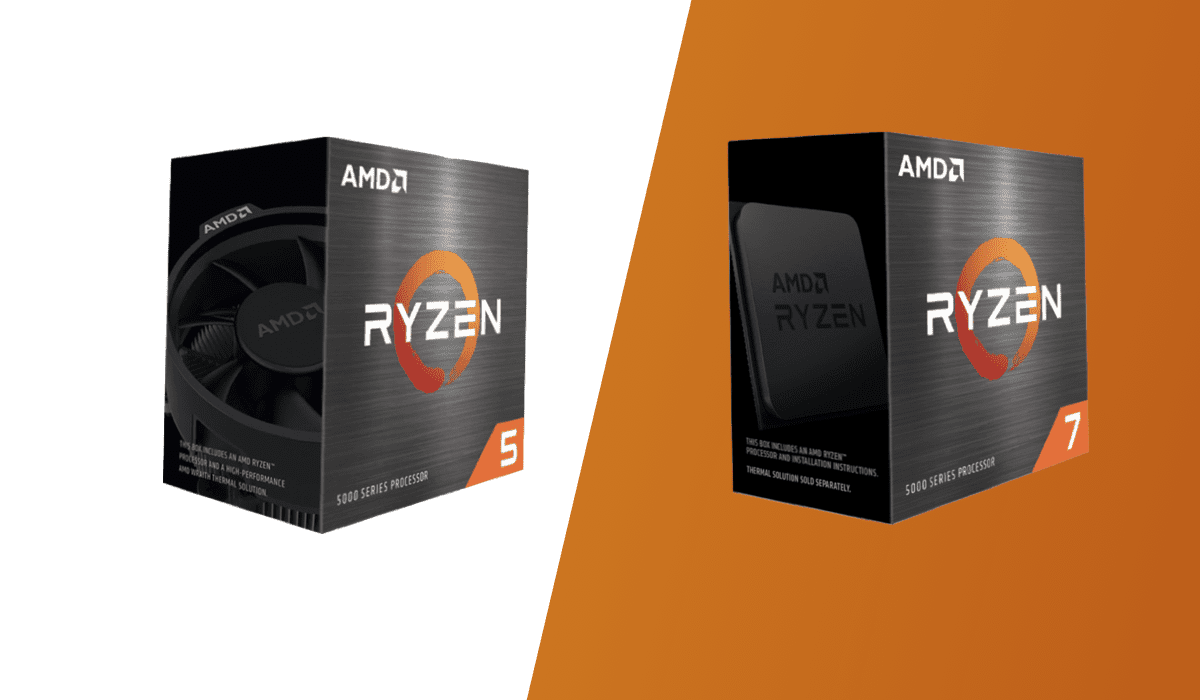 The next batch of AMD Ryzen 5000 Series CPUs is finally upon us after the initial launch saw AMD’s available units sell out within minutes. And though this launch was disappointing to many, it did allow reviewers to thoroughly test these processors, and release benchmarks that can help us make a more educated assessment in regards to which CPU is best for each intended purpose.

A somewhat controversial topic, when it comes to comparing the recently announced Zen 3 processors, has been gaming. This controversy is related to the fact that all four Ryzen 5000 Series processors seem to perform similarly when it comes to framerate benchmarks, with only slight differences between each model. What makes this an impressive feat for the Ryzen 5600X, which is the least expensive of the Zen 3 lineup, is that it performs similarly to the Intel’s flagship i9-10900K, at almost half the cost. If one were to add the additional value that an AMD Radeon RX GPU would add to any Ryzen processor, with their mutual use of Smart Access Memory, then this benchmarked framerate becomes even more remarkable.

Despite knowing that predicting the distant future is practically impossible, what we can foresee is that game developers are much more likely to optimize their titles based on both AMD’s CPU and GPU capabilities and features, as both new-generation consoles – the Xbox Series X and Playstation 5 – utilize these AMD hardware components. Therefore, this lead that AMD processors and graphics cards hold over their Intel and Nvidia counterparts, may very well increase as time passes by; and, as developers continue to optimize their games to the potential of these processors, the hardware demands that these games will have will also see an equivalent increase. So, the current six cores and twelve threads that are currently necessary to run any game perfectly fine, may become outdated in just a few years’ time.

What differentiates AMD’s current Ryzen CPUs with their previous generation, Zen 2, processors, is Zen-3’s new CCX (Core Complex) architecture – which has doubled in size. Previously, each CCD (Core Chiplet Die) could hold up to four CCXs, and each CCX could contain four cores and 16 MB of L3 Cache. Now, a CCD only needs to hold two CCXs, as each can now contain eight cores and 32 MB of L3 Cache. Because these CCXs are not required to communicate with each other through AMD’s IF (Infinity Fabric) to gain access to all 32 MB of L3 cache, each core can reach much higher single-core speeds; which gaming applications are more dependent on. Hence why we see such a significant generational leap between the Ryzen 3000 and Ryzen 5000 Series CPUs, in terms of framerate output. Additionally, because games are not reliant on multi-core performance, a single CCX is more than enough for processing games, even at a high level. Out of the currently four announced Ryzen 5000 Series processors, two models have a single CCX: The Ryzen 5 5600X, and the Ryzen 7 5800X.

The price difference between these two CPUs is of the order of 50%, so choosing which processor to invest in can be a tough choice to make. To better assess whether or not the Ryzen 7 5800X’s specifications justify its cost – when compared to the Ryzen 5 5600X – we will analyze their features, power efficiency, benchmark performance, price and availability, and come to a conclusion on which Zen 3 CPU provides the best value for gaming, and other applications.

Both CPUs feature an identical interface: an AM4 chipset, PCIe 4.0 x16 compatibility, 3,200 MHz DDR4 dual channel system memory, and a TSMC 7 nm FinFET processing node. Of course, there is a clear advantage for the Ryzen 7 5800X in terms of specifications, in that it has two additional cores and four additional threads; though still sharing the same 32 MB L3 cache that the Ryzen 5 5600X’s cores can access. Other than that, the Ryzen 7 5800X’s cores also operate at a base, and boost, clock frequency that is 100 MHz faster than the equivalent Ryzen 5 5600X speeds – which is not a significant amount, but can still translate to a minor boost in performance. The main aspect in favor of the Ryzen 7 5800X’s specs, is that it has a full-capacity CCX, with a core and thread count that is equivalent to what can be found in both new-generation consoles.

But when speaking of these new-generation consoles, it must be pointed out that the Ryzen 7 5800X, alone, costs almost as much as either one of them. This is also the argument in favor of the Ryzen 5 5600X. This CPU may cost 50% more than the previous generation Ryzen 5 3600X, but it still offers the best price for performance ratio (TechSpot) of all four initially launched Zen 3 processors. Not only that, but it is also the only Ryzen 5000 Series model that includes a stock cooler. Of course, the stock cooler isn’t the greatest, but for someone looking to build a new PC on a budget, and cares little about overclocking their CPU, the Wraith Stealth can provide sufficient cooling, and overall additional value to the CPU’s price. The previous generation Ryzen 7 3800X also did include a stock cooler, in the form of the Wraith Prism: A respectable cooler that perhaps could have been included in the price of the $50-more-expensive Ryzen 7 5800X.

In terms of availability, neither of these two CPUs can currently be found, as AMD’s initial stock disappeared almost instantly. An AMD executive now mentions that they shipped “tons of units”, but demand greatly exceeded their supply. Still, no matter how high the demand was, it should not take a few minutes to completely sell out of a new series of four different CPU model… but we digress. Currently, it does look like the Ryzen 5 5600X holds a much higher market share (UserBenchmark) than the Ryzen 7 5800X, and chances are it will be the more popular choice between the two. This also means that it is more likely to sell out at a faster pace, and therefore be more difficult to find in comparison to the Ryzen 7 5800X when they re-release.

All Zen 3 CPUs are set to include AMD’s StoreMI technology, which pairs frequently used files on an HDD with an SSD cache, for quicker load times, boot times, and system responsiveness. It does so by mirroring these files to the SSD, and redirecting the operating system to use the mirrored files.

Additionally, AMD Ryzen Master Utility will be bundled, which is a software application that can be used for system monitoring and overclocking for both Ryzen CPUs and Radeon GPUs if available.

Finally, if you are planning to purchase one of AMD’s new RDNA 2 Radeon RX 6000 Series GPUs, then the Zen 3 Ryzen CPU will also utilize Smart Access Memory, which creates an expanded data channel, incorporating both CPU and GPU memory in order to remove the GPU memory ceiling via the utilization of PCIe bandwidth. Effectively, this feature increases the overall framerate output of the GPU by up to 11%, across multiple gaming titles.

Another aspect which makes the Ryzen 5 5600X, even more, cost-efficient than it already is, especially versus the Ryzen 7 5800X, is its incredibly low 65 W TD: which is 40 Watts less than the TDP of the Ryzen 7 5800X. This 38% power efficiency is especially remarkable, given the gap in actual performance between the two CPUs.

To get a complete picture of how the Ryzen 5 5600X fares against the Ryzen 7 5800X, we must not just compare their single core capabilities, but also their multi core performance as well.

Where the Ryzen 7 5800X falls significantly behind to the Ryzen 5 5600X, is its price to performance ratio. Even for multicore performance, the Ryzen 7 5800X trails by 10.7% in cost-per-frame, while for gaming performance it trails by 31.5%… But both CPUs fall behind the Ryzen 5 3600 in both categories as well. The main issue with reports that display a price to performance ratio, is the fact that the threshold of performance one seeks from a component is not taken into account. For example, if someone is shopping for a CPU that can be paired with a Radeon RX 6800 XT to consistently maintain a framerate above 120 FPS for 1080p gaming, then no matter how price efficient the Ryzen 5 3600 is, it will not suit their baseline needs.

This is also the aspect that needs to be considered for the Ryzen 5 5600X. Will it continue to process such high framerates, as the graphical capabilities of new-generation games progress? On the other hand, for the Ryzen 7 5800X, we must ask:  Is it worth its price, considering it only costs $100 less than the Ryzen 9 5900X?

Both the Ryzen 5 5600X and the Ryzen 7 5800X do delivery an amazing level of performance for their price –but if pure value is what you seek, then nothing beats the Ryzen 5 5600X – especially when it comes solely to gaming. Not only does it perform on a high level, but it even achieves an average framerate that is within 3.75% of the what Intel’s flagship i9-10900K is capable of, while costing far less, and requiring almost half the amount of thermal power.

If the intended purpose of your PC build is not just gaming, then the additional cores and threads of the other Ryzen 5000 Series CPUs will come into use for tasks like streaming and content creation.

The only argument that can be made against the Ryzen 5 5600X, is that it might not hold up very well in the near future, whereas the Ryzen 7 5800X may fare much better later down the line. Admittedly, this argument is fairly weak, considering that PC hardware is meant for immediate use, and should not be based upon a theory that may not even come true. For gaming and streaming, the Ryzen 9 5900X appears to provide more value for its cost than the Ryzen 7 5800X, and will surely continue to do so as time progresses. Perhaps the smartest choice would be to wait for the announcement of a Ryzen 7 5700X: A CPU that will cost less and potentially have a 65 W TDP like its Ryzen 3000 Series predecessor. Of course, it is difficult to tell if and when any such announcement may occur, so waiting might ultimately be futile. For now, and for the vast majority of users, the Ryzen 5 5600X is the way to go.